The discovery of an early Dawes Red Feather came by just sheer chance whilst out on a ride with a friend.
The sight of a discarded table lamp drew my attention as we approached an area which is regularly used for dumping rubbish. I jokingly said to my friend that it might be valuable and went over to have a look at it.
As I got close to the lamp I happened to notice a cycle buried in some brambles, it was quite well hidden but I could make out that it was an old steel framed bike complete with leather saddle, wheels ,cranks and bars. It looked interesting so I clambered over some brambles and fished it out .
It took a while for me to recognise it as the front end had been in a fire. It had a fancy enamelled head badge. I could see an Olympic torch and then it twigged! It was a Dawes!
As we were both on bikes there wasn't much that we could do about it so I put it back and would pop back on our return trip to see if it was still there. It was still there when we returned. I had been wondering if someone might have found it whilst we were away. We cycled home and I returned with my car and toolbox. I unbolted the wheels and loaded the bike into my car. I had been told to place a plastic sheet down by SWMBO so the car wasn't contaminated by the smell of burnt debris.
Once I got the frame home I gave the bike a good wash to try to find a frame number. Once found I the number I searched to see if it was stolen . Nothing !
The cleaning had revealed the Dawes script on the down tube as well as the name Red Feather on the crossbar, the feather transfer was still visible on the seat tube. 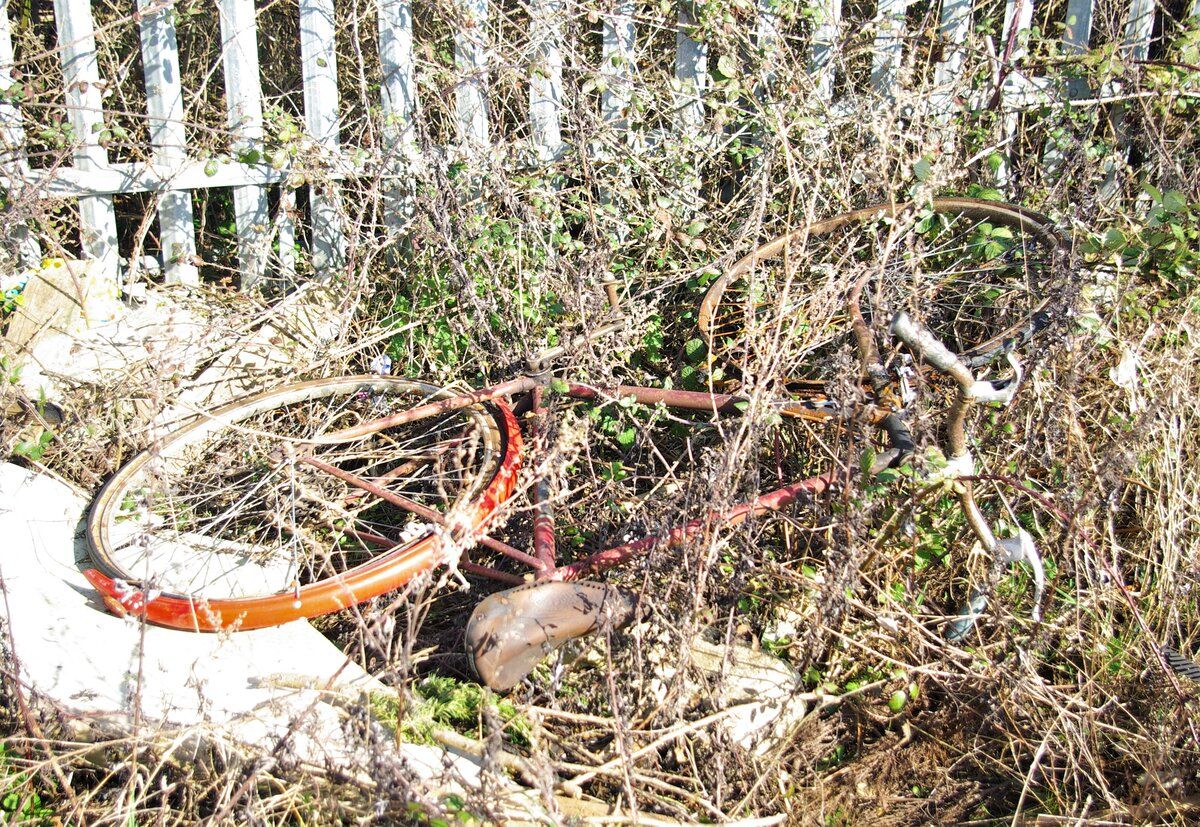 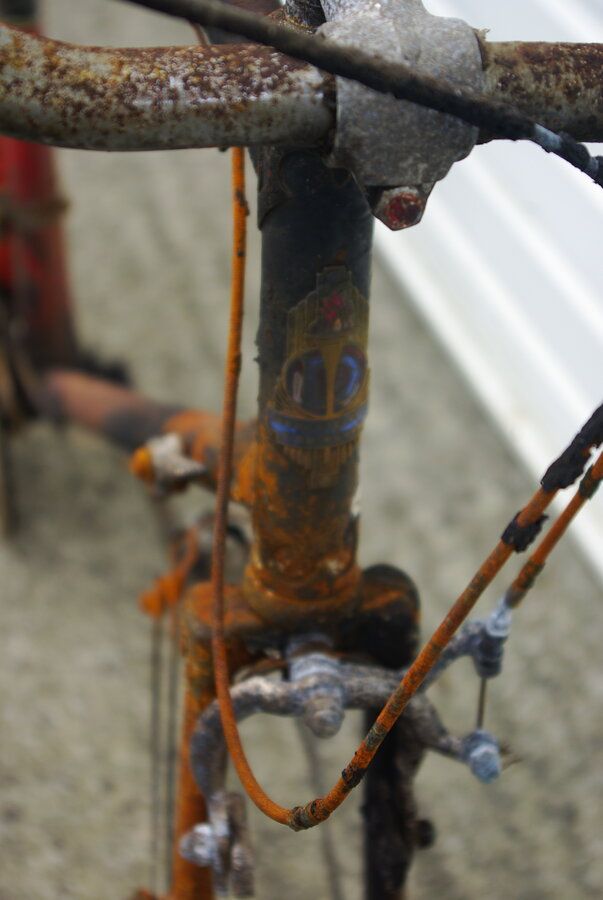 A lot of work that, is the lamp still available...

That’s definitely restorable, I’ve got a spare set of Campag shifters and a GB stem and drop bars if you’re interested.

You’re being a tad optimist if you think you can save that. Even @SkipdiverJohn would have cycled past that one.

Cycleops said:
You’re being a tad optimist if you think you can save that. Even @SkipdiverJohn would have cycled past that one.
Click to expand...

I could save that, the frame just needs blasting and repainting. Every part is available used off eBay. It is worth the effort.
OP

weareHKR said:
A lot of work that, is the lamp still available...

Yes! Do you want it ? I think it is a Moorcroft! One from his plain era.
OP

The frame is cleaning up slowly . I'm using different things . I started off with lime juice but have now started using rust removing gel, scrubbing it with a toothbrush .
Both wheels are steel and rusty , the front one was missing half it's spokes. The rear hub is a Normandy LF. The cranks are Niklin and the rear mech is a Campagnolo Gran Sport with red idler wheels . The saddle is an Ideale leather, I have managed to clean it up and treat it , it is missing the steel nose piece . I will have to make up a replacement piece .
The frame has a lot of patina !

Here is the saddle before and after.

looking far better/well nourished - what did you use?
OP

Here are a few more before and after shots. 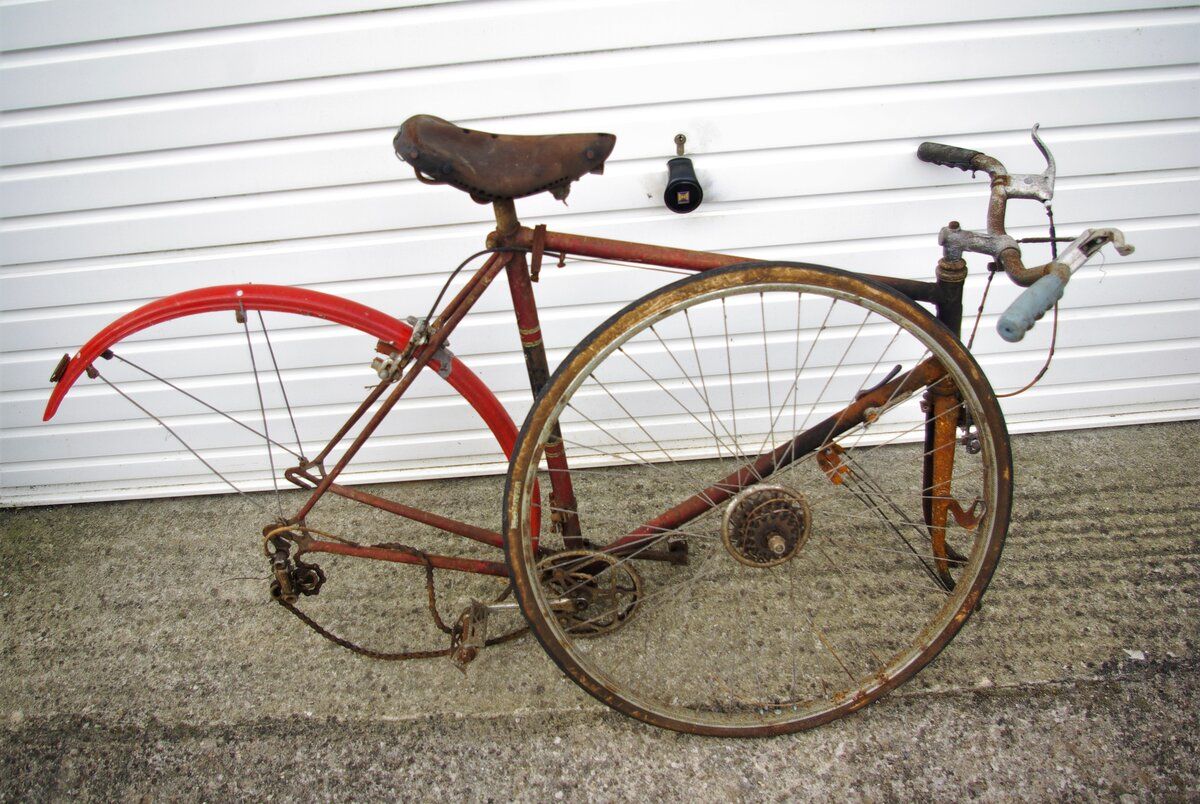 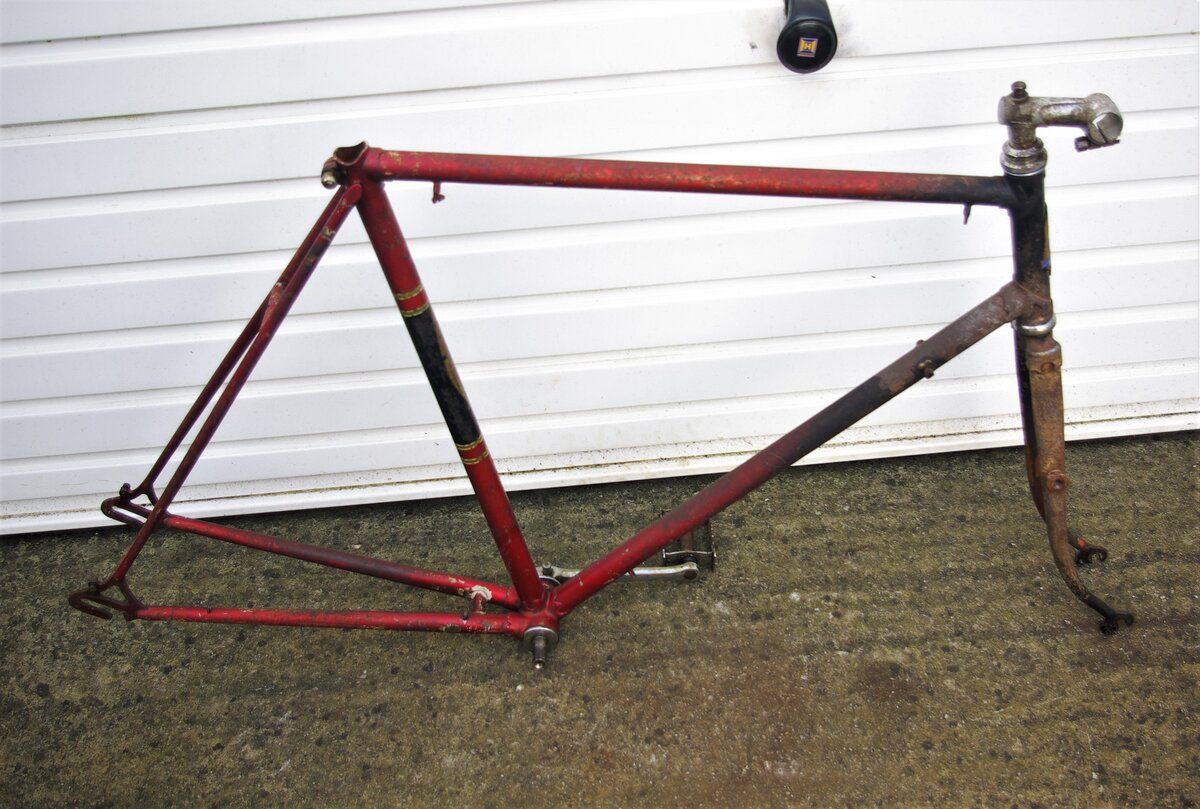 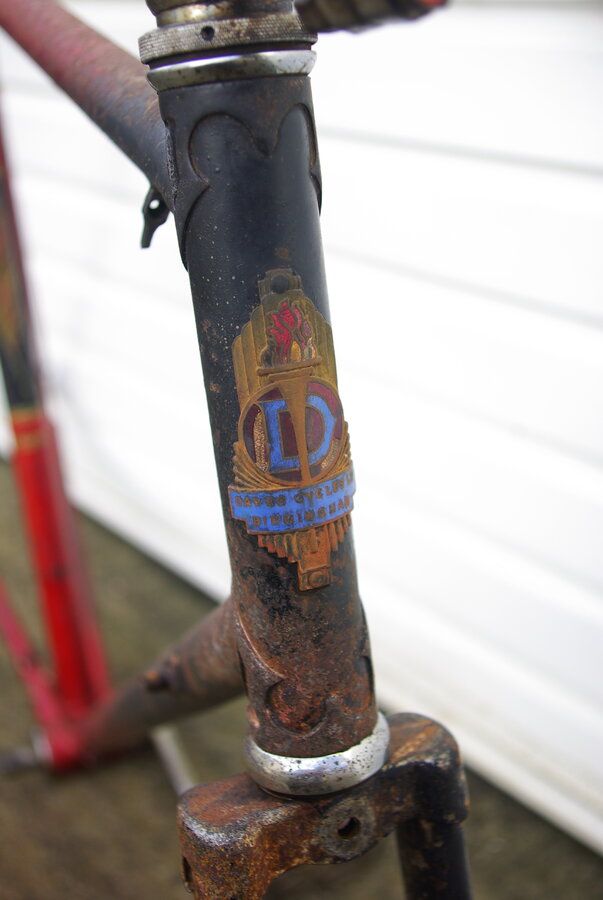 Illaveago said:
Here is the saddle before and after.
Click to expand...

carpenter said:
looking far better/well nourished - what did you use?
Click to expand...

I washed it off with ordinary soap and water and then smothered it with Lord Sheraton wood balsam and wrapped it up in a plastic bag overnight. I then let it dry off for a bit after removing it from the bag and then gave it a coat of boot polish. it had softened up which allowed me to cram some padding underneath to try to raise the sunken bits. I left that overnight and removed it today. It has regained some of its shape.
OP

Here are a couple of after cleaning 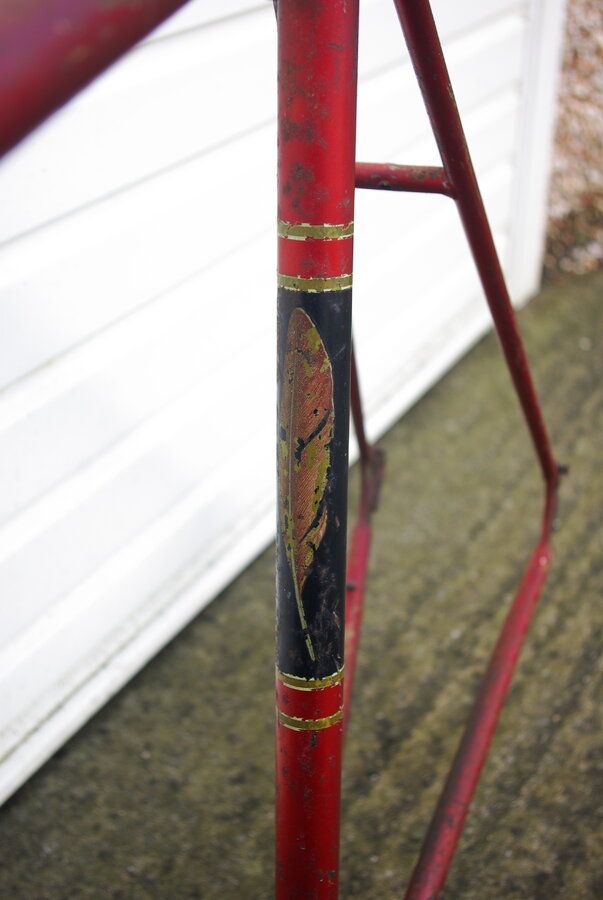 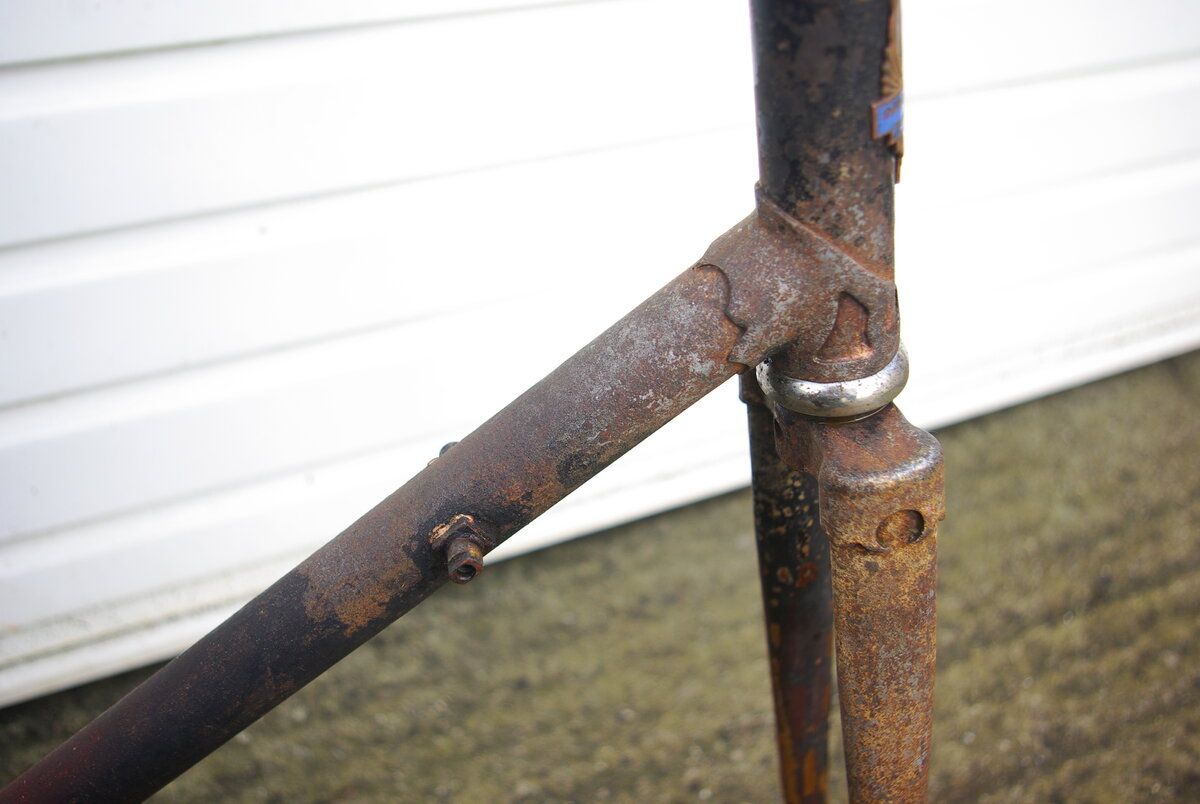 My first proper bike was one of those in a small kids size in 1969. looks very similar to the one I owned, so yours is probably about the same age. Would have come with some nicely engraved drop bars when new.
OP

My first proper bike was one of those in a small kids size in 1969. looks very similar to the one I owned, so yours is probably about the same age. Would have come with some nicely engraved drop bars when new.
Click to expand...

I think it is from 1962 as it has the earlier style enamelled head badge.
You must log in or register to reply here.
Similar threads