Electric bikes. Is it just me?

I have a feeling that my confessing to owning a pedelec will be greeted with hoots of derision by you 'serious' cyclists.

I was given our ex-fleet Giant LaFree electric bike. I asked how much we'd sell it for and Jim said I could have it! Its got to be worth £800! A to B magazine consider it to be one of the finest lecky bikes ever made. Result!
The reason I wanted it is that I seem to have developed some as yet undiagnosed joint pain in my knees and hips, riding anything more than 5 miles brings it on and riding the LaFree allows me to commute to work (rather than drive my very lovely Corrado). As we are a company which promotes cycling, riding to work is clearly a good thing. I used it on the Company of Cyclists holiday in the Wolds this year riding at the back of the 'slow' group it was fantastic for pushing any tail enders up the hills or back to the bunch.

Pedelecs drive through the transmission so one has to be pedaling for it to assist. Lecky bikes are restricted to 15mph, the origional LaFree had a wheel magnet and sensor to enable it to sense how fast it was going and cut the power. It was easy to 'de-restrict' it just by removing the magnet. My later model has an internal sensor and I have managed to trick it by installing a 13t sprocket in place of the stock 16t. Now it cuts out around 18mph

I am in the process of 'hot-rodding' mine, its now got faster tyres and some parts upgrades. The battery and motor weigh a ton, theres no getting round that but I would still like it to go faster. I know little about electrics, does anyone know what else I can do to hot it up a bit?

Sounds great fun,have you got any pics?
OP
OP

No, but Ill see what I can do. Was talking to a chap today who reckons that there are electric bikes on german roads capable 25mph!!!!!! Good lord!! Thats like SO illegal.

Yes, it's a great bike - and because you still have to pedal, you're still benefitting from the movement in your joints, even if the amount of pressure you have to put on them is reduced...

Plus, it doesn't instantly look electric - at first glance, it's just another bike...

As for hotting it up, well, we must have another beer and curry night, and you can go for prawn vindaloo again...

If I had one of those I'd use it for the commute every friday, I'm usually knackered by the end of the week, it'd be ideal.

If you wanna make it lighter, you can spends hundreds or thousands on lighter battery technology. But look in the bright side, for the ammount of assistance you get, you've got the increased weight to take uphill

Way to go mickle... I love the idea of more people just realising they don't need to use cars

I do a 10 mile round trip commute, but to some people at the office, I look a bit eccentric

sometimes people with long car commutes squint at me with mistrust when I tell them they could do the same journey on an electric pushbike, in not that much more time

I don't want to save the world, I just want to make smart arses who don't know an eccentric from their elbow, become eccentric themselves, so I can reject them
U

She loves it as it gives her a lot more mobility at 82 than she would be capable without the assist and an independence that public transport does not offer.

However the machine is driven by a throttle and designed to convey large Americans.

As a small slight pensioner she can easily get 20 mph out of it!

Location
Between Hessle and Hull

i have a lot of time for electric bikes, used one myself for some time. it allowed me to cycle (with all the benefits there of) when my health was not up to a 'normal' cycle. i used a currie electro-drive kit on a trek 6500 mtb, looked pretty good too.
no pciture of it on the trek, but here's one of the currie on the trice classic i used to have. 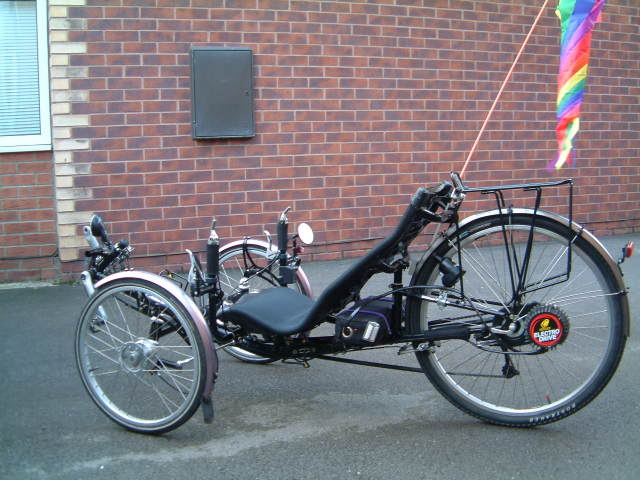 Saw that set up on a couple of bike at Eurobike. Is it any good?

Doesn't give a lot of hard info, but this article indicates that it's not just you.

I like the idea of an electric bike,not arriving at work sweaty,and no facilities to clean up,and the sink full of oil.And a chilled trip home,could even get rid of the car possibly.But 15 mph is a bit restrictive i think?

Thought id reincarnate this thread,as i have seen a couple of electric bikes lately flying along,and wondered if anyone else has one?Im interested in how they perform over time,and how long to charge whats the ups whats the downs,seriously interested in one.

Location
Beside the road

My father has one. He uses it very infrequently. It was brought for him because he's very overweight and I wanted to get him out exercising.

The battery now only last about half of what it did when new. You'd be lucky to get 10miles out of it on a charge.

It has a 180w motor and 20" wheels. Must weigh in at about 25kg (ton weight!) Even with the motor assisting he seems to crall along at a painfull 8/10mph on the flat and he has to push it up most hills.
You must log in or register to reply here.