I spotted an unused Bianchi Methanol frame on eBay for 350 notes and couldn't resist. I've been contemplating a hardtail for a while and this seems to fit the bill nicely!

It's a Methanol 27.5 SX, 2016 I think, in matte black with a few red and celeste highlights. Here's a photo from the advert: 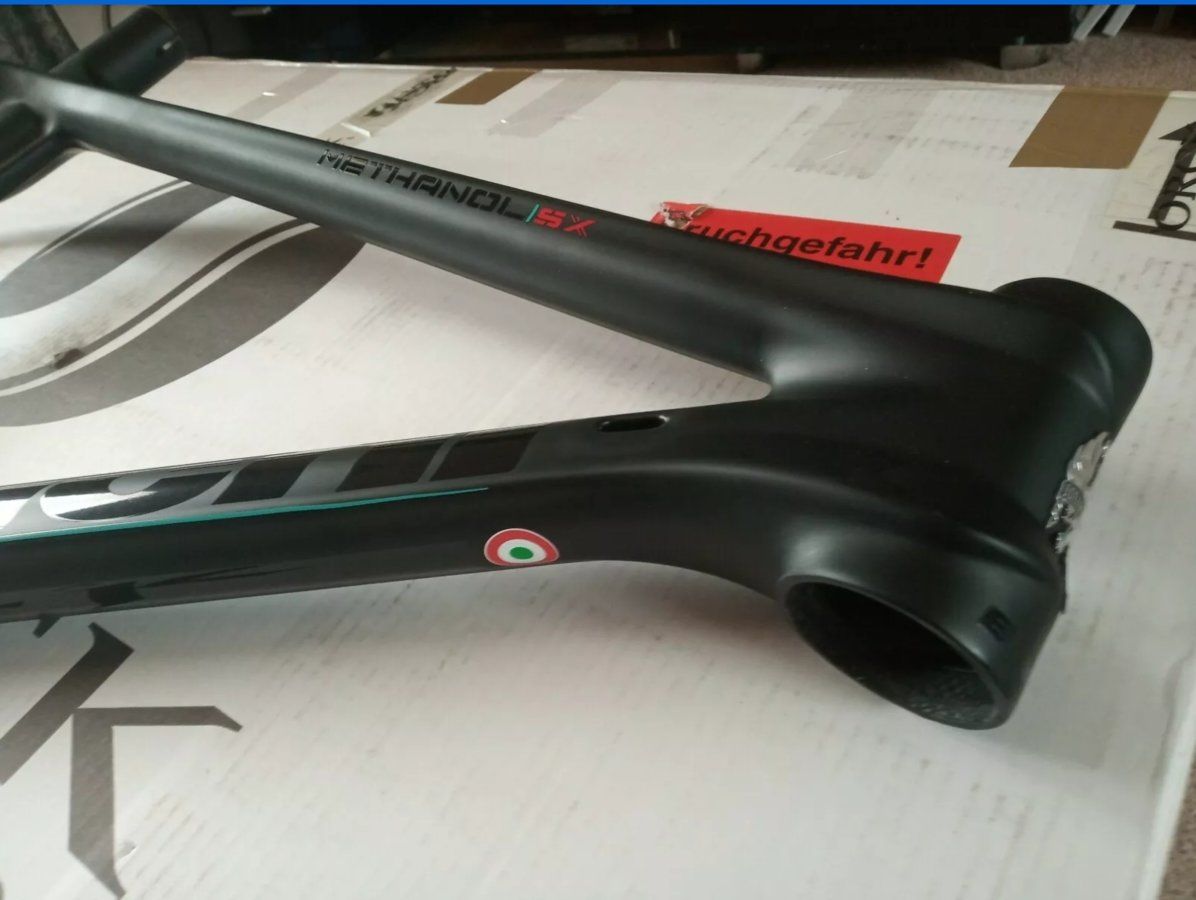 I've also found some unused RockShox SID RL's and purchased those too... 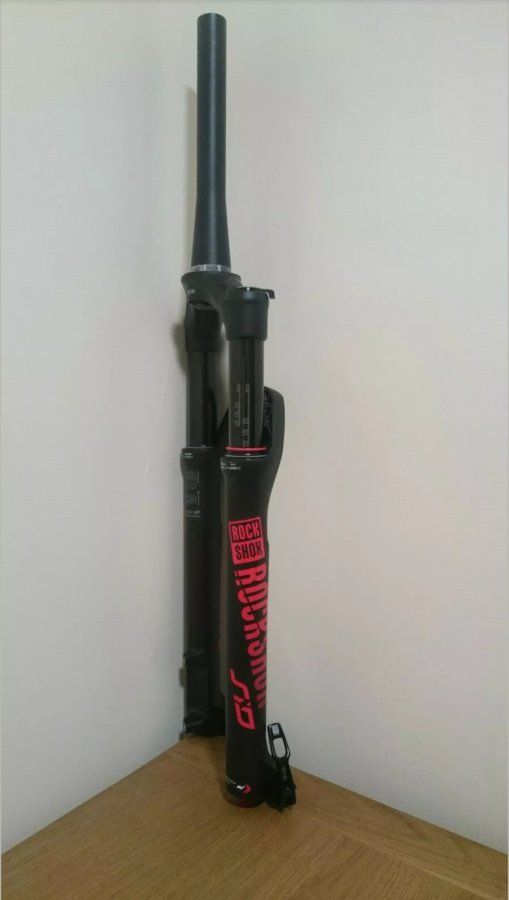 I've got some XTR Di2 shifters and front mech from a previous project so I'll source a second hand rear mech, battery and other bits. I fancy building some carbon rims on to Hope Pro 4 hubs, and will likely go with my usual choice of Hope brakes

Frame and forks should arrive sometime next week...

Excellent, looking forward to this.

yep, should be good

I've got to work out whether it's possible to convert these SID RL's to remote lockout next... The kits seem to exist but there seem to be several different ones, bit confusing

Any ideas? This is the top of the fork leg... 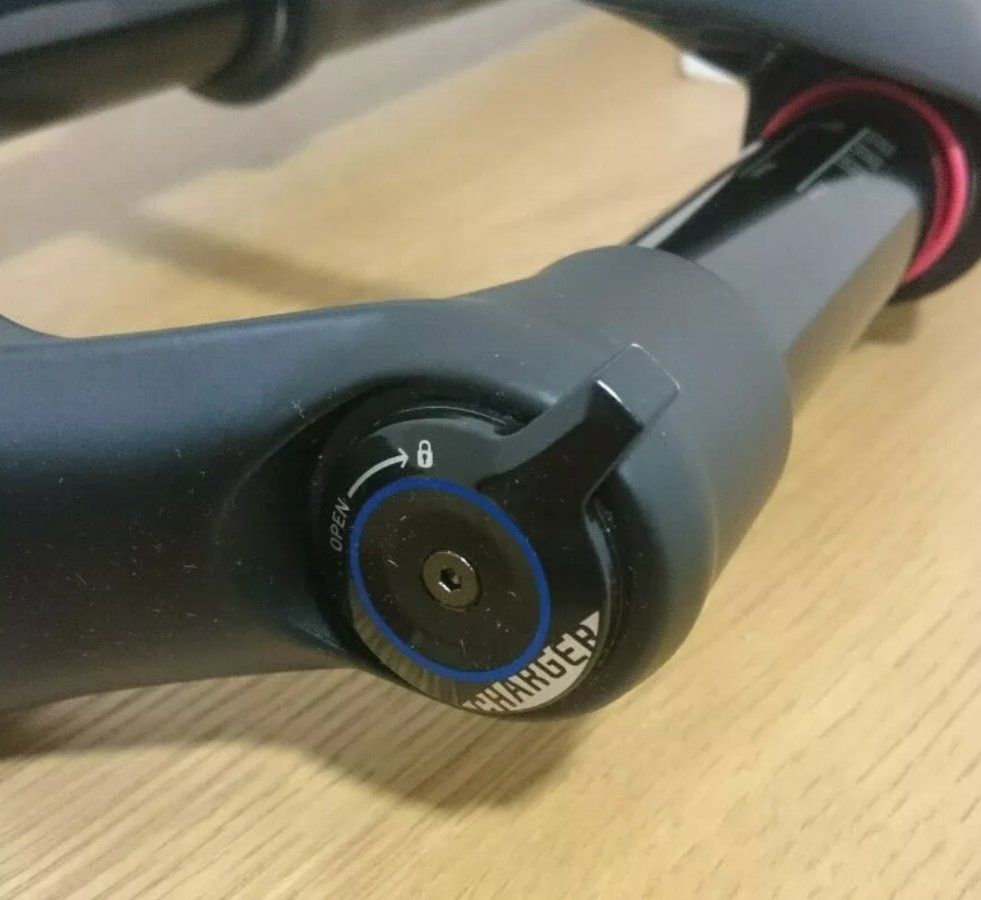 A few more bits bought today so here's what I've got so far...

Bits I still need to decide on and source are:

Wheels - quite set on Hope hubs, considering building some in to carbon rims
Brakes - Hope, probably Race Evo E4's
Rear mech, XTR M9050 Di2
Di2 Battery, probably DN-110 internal
Di2 display, need to investigate this, think they have built in wireless?
Bars - not sure yet but probably carbon low rise of some description
Pedals - XTR SPD, probably PD-M9000's to match the rest of the groupset
Tyres - no idea yet, I'll be asking for advice

One thing is clear, I need to save some more pennies to finish this build

I started researching dropper posts today and how to squeeze an internal Di2 battery in while using one and in doing so came across a bargain RockShox Reverb Stealth model so snapped it up.

I also bid on and won some Hope hubs I'd been watching on eBay, a black Pro 4 rear and black Pro 4 Boost front, both 32 hole. I've started researching chinese carbon MTB rims, think I'll end up giving them a punt as it seems there are lots of people using them these days. The chinese carbon road rims I bought have barely been used yet but they built up nicely and the tubeless tyres are holding pressure which is always a good start

I probably shouldn't have spent any more money, any further major purchases will have to wait until pay day now

First few bits are coming together after some deliveries today, hopefully a few more tomorrow 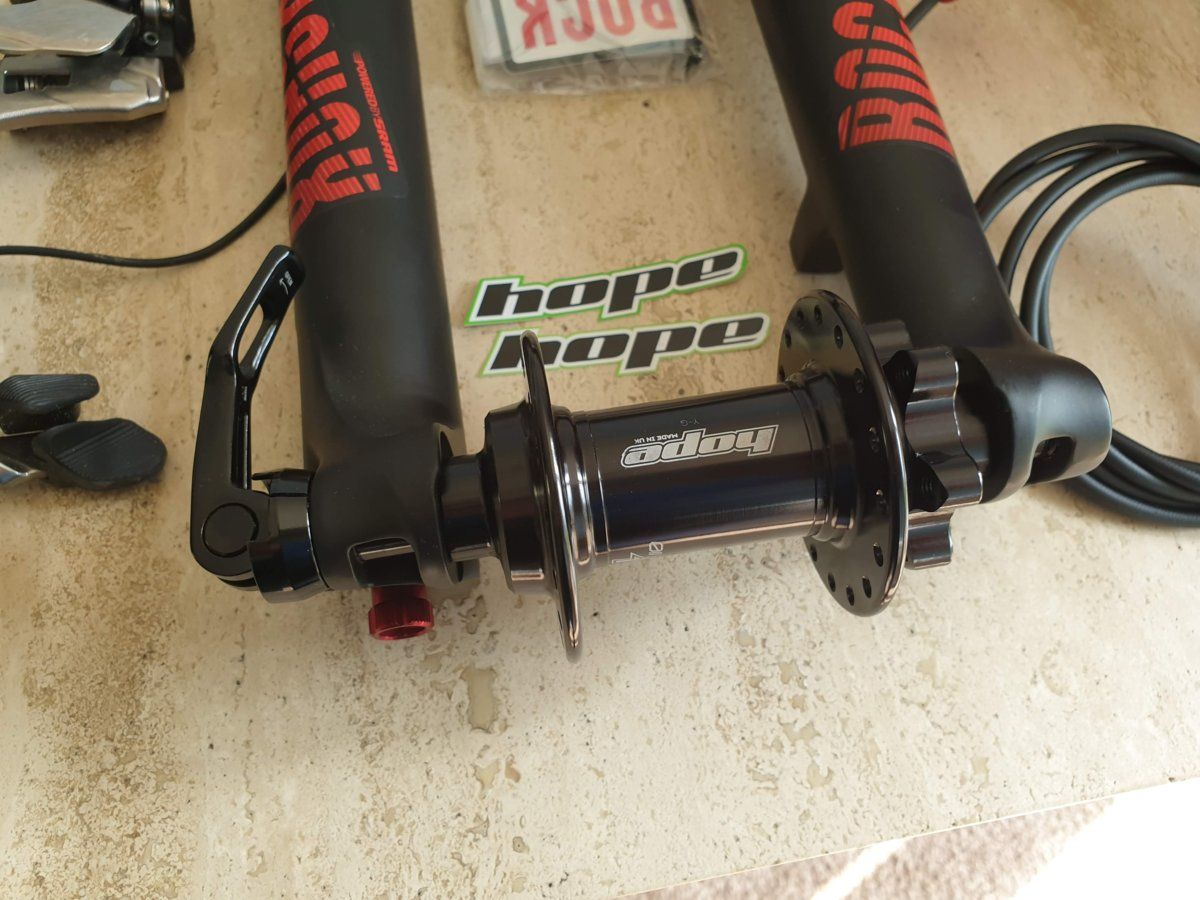 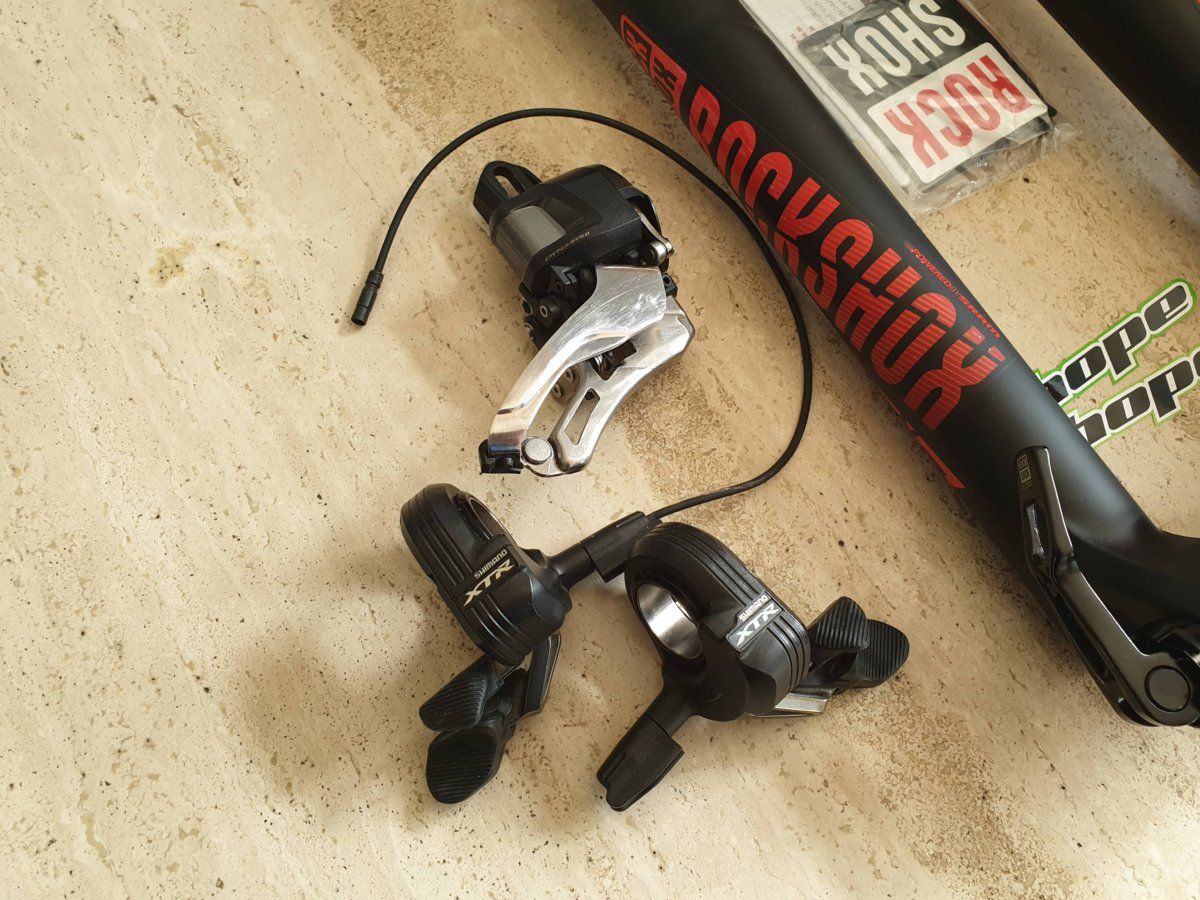 I now have the cranks, bottom bracket, rear axle and rear hub

It's just struck me that everything I've bought so far is black; this is going to be a jolly dark bicycle unless I brighten it up a bit somehow 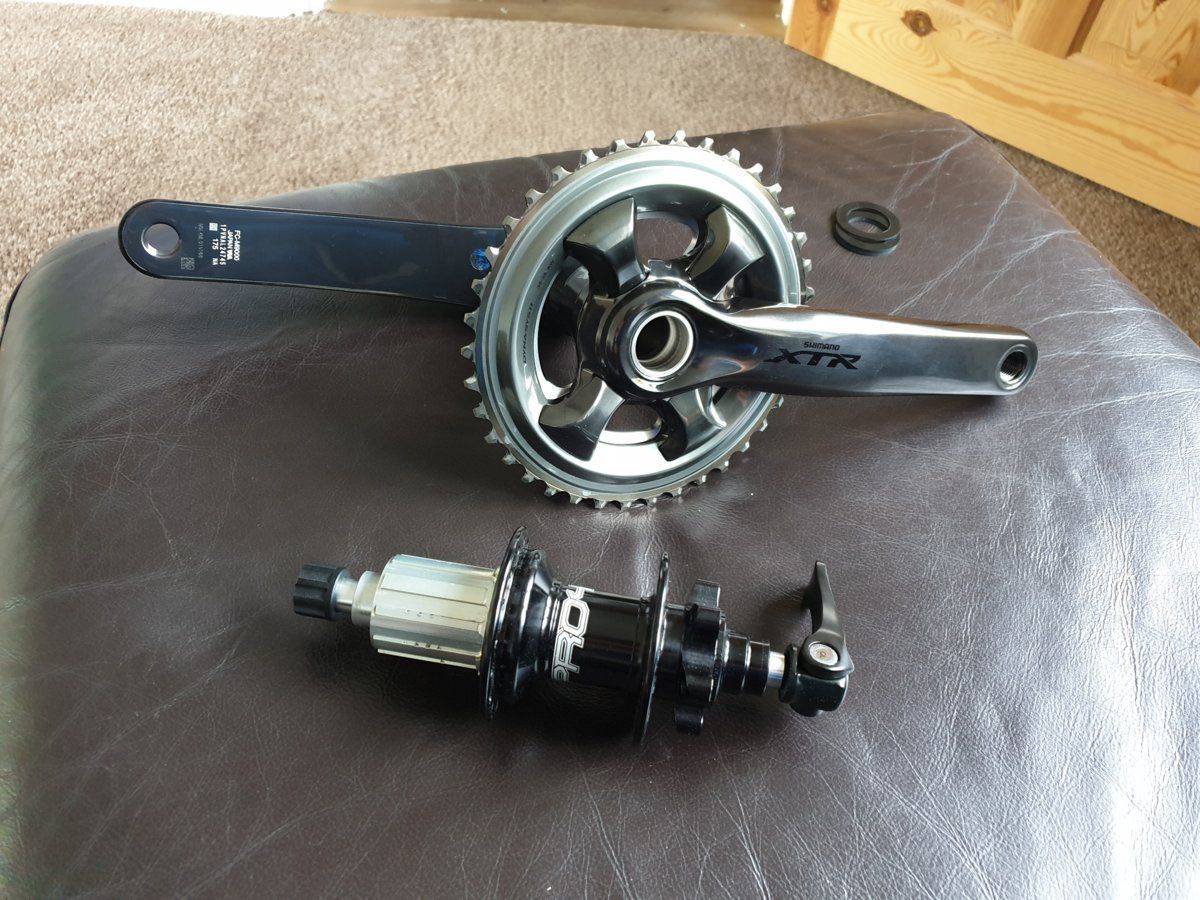 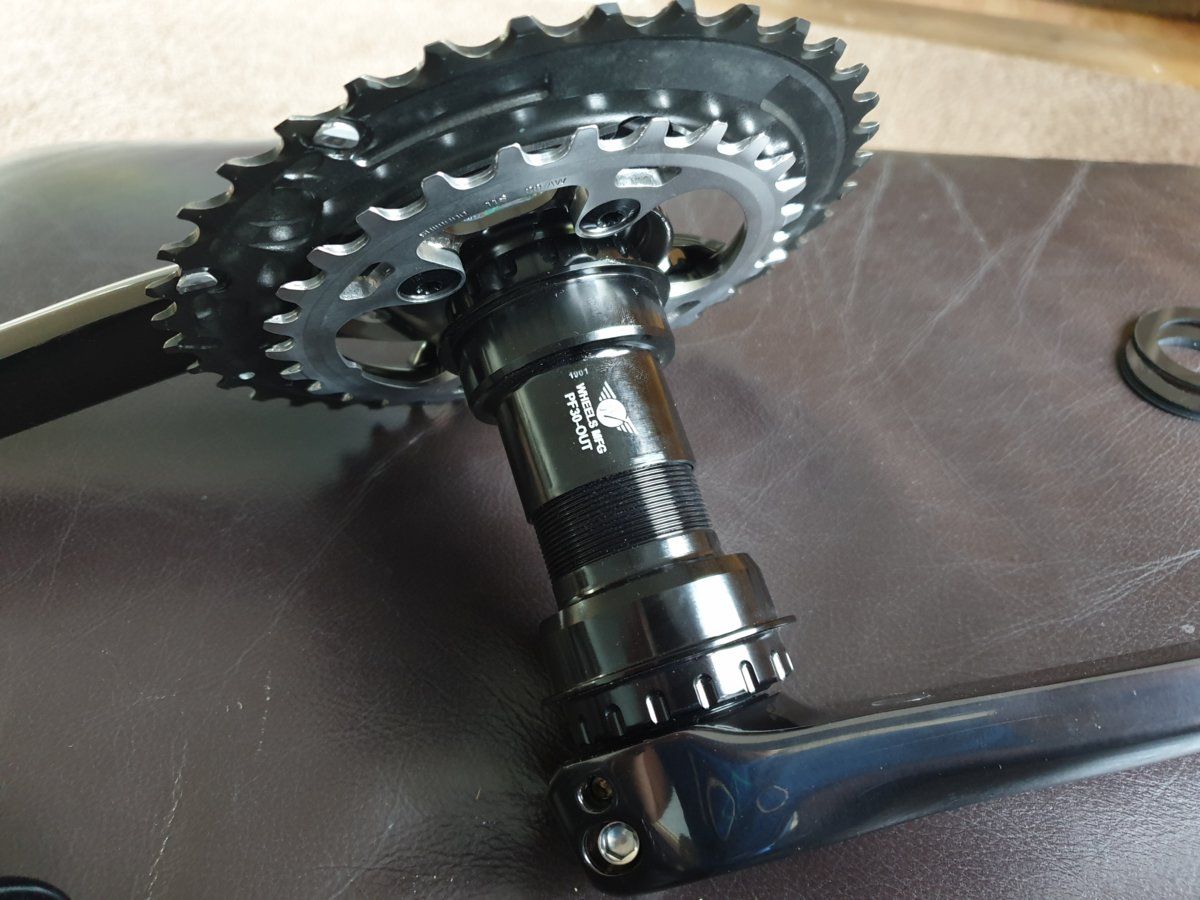 The bits I've sourced now are:

So my list of things still to source is now pretty short...

Spokes - havent calculated the lengths yet
Tyres - need to measure clearance when the frame arrives to see how big I can go
Saddle - no idea as yet, I'll see what's on offer

I collect the frame on Monday, then I can start building bits up pretty much straight away as a lot of the parts are already here waiting

The rims are a month or so away I would guess, the rear mech is coming from Japan and the Di2 screen is coming from the states... Strange where the best prices end up being sometimes

I picked up the frame from the Parcel Force depot today 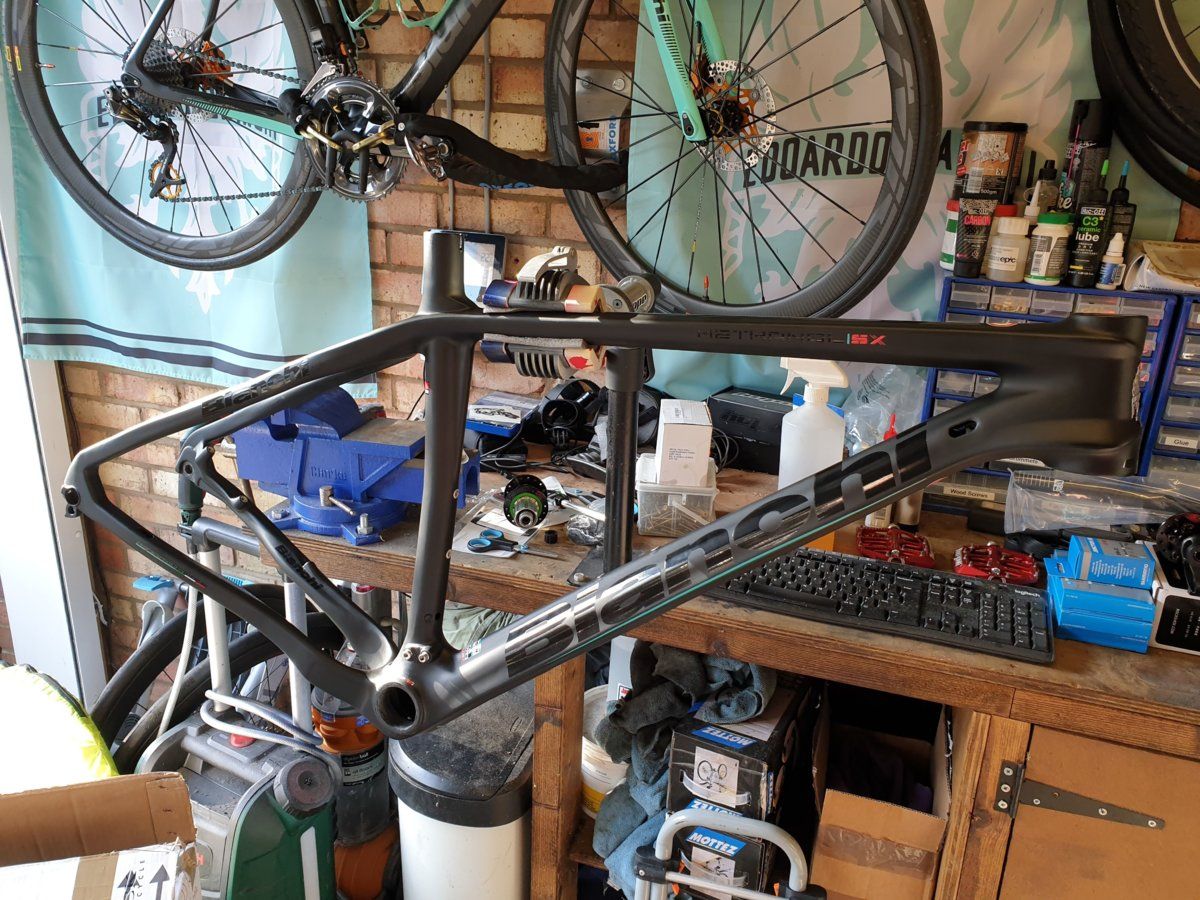 Brand new and undamaged as the seller had promised, and without all the useful frame fittings. They'd told me they were missing but I was hoping to find them hidden away somewhere

Not to worry, I'd ordered a mech hanger anyway and will be able to bodge/engineer my way around the other missing bits without too much bother I'm sure

First job was to fit the gear hanger and press the new headset in. This allowed me to put the hubs in and fit the forks and stem, they'll come out again later to trim the steerer when I know where it needs to sit... 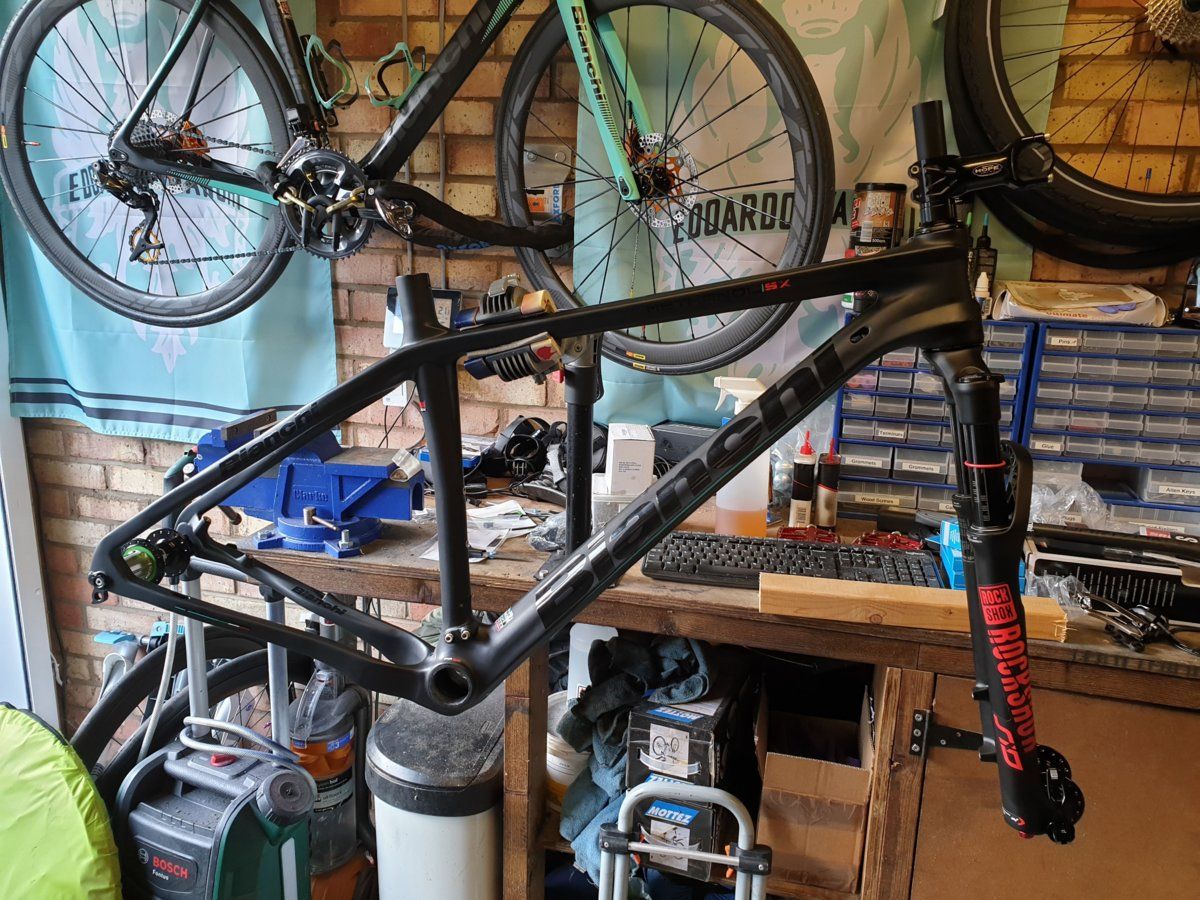 Having waited over a week for it I wasn't about to hang around building it so next I started running a few Di2 wires I had spare... I decided this would be a good time to run the hydraulic hose for the dropper post too so I could attach the Di2 battery to it before it was lowered in to the seat tube... 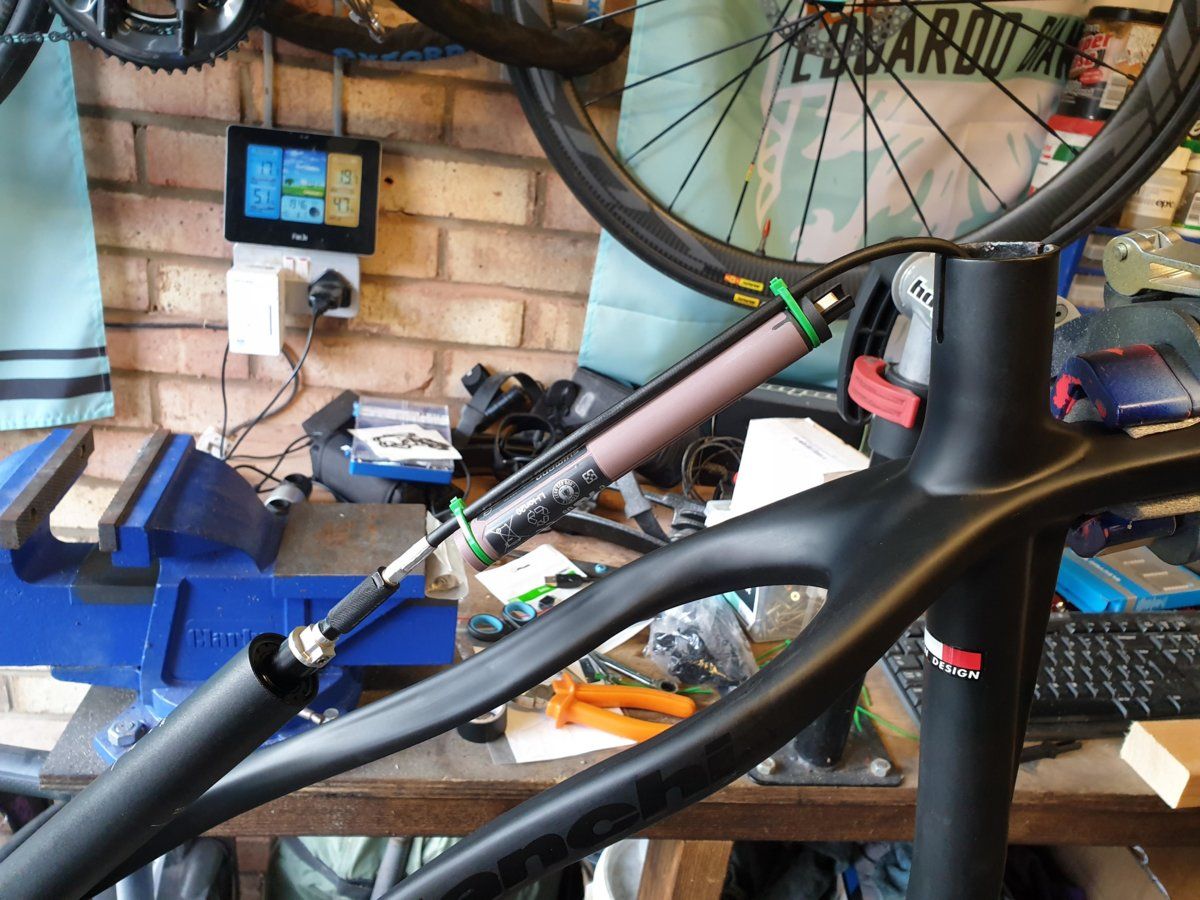 With this in I fitted the front mech and connected the cable up to it, the junction box is now neatly tucked up in the base of the seat tube... 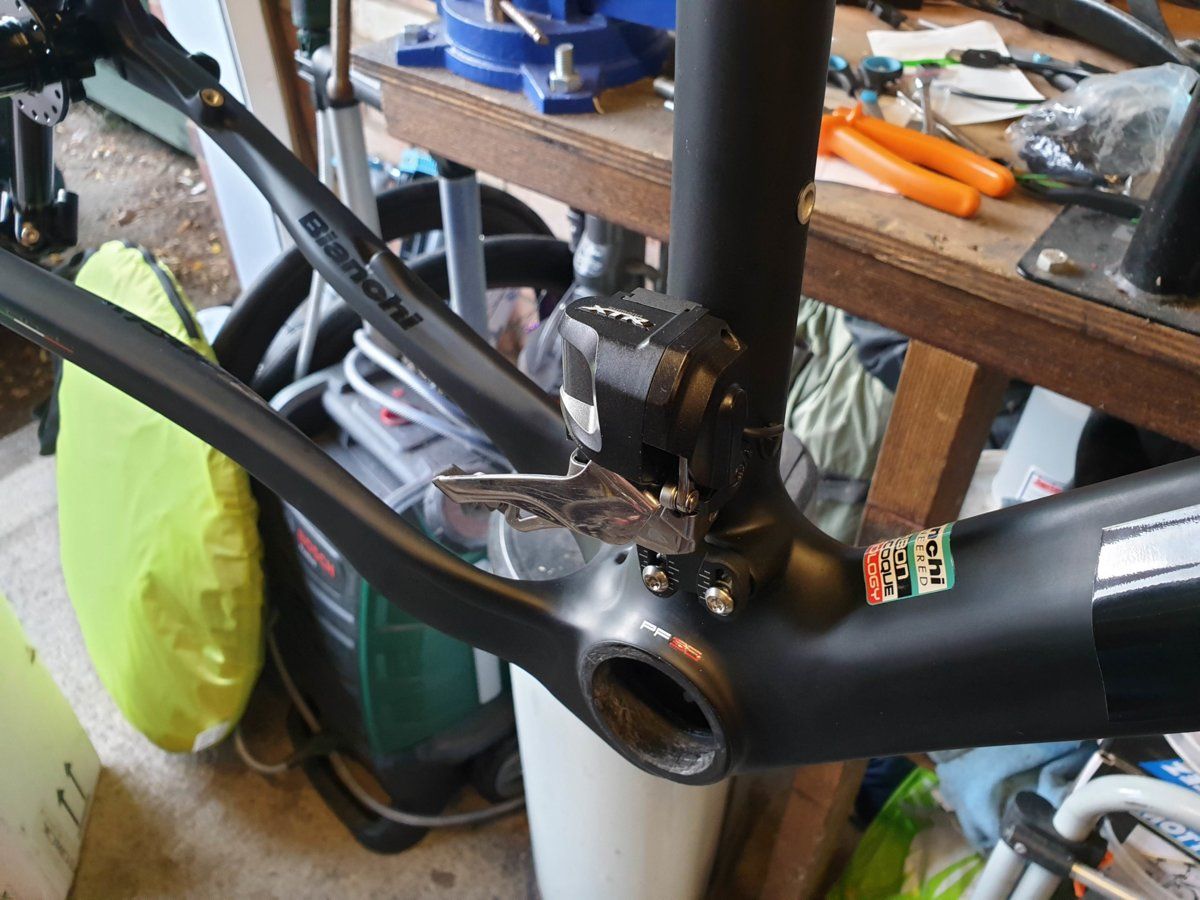 I ran some garden twine through where the rear brake hose will go and popped the bottom bracket and chainset on. Hopefully I'll be able to pull the hose through without removing it again but its not a major trauma if it has to come out again Here's a shameless shot of some XTR loveliness 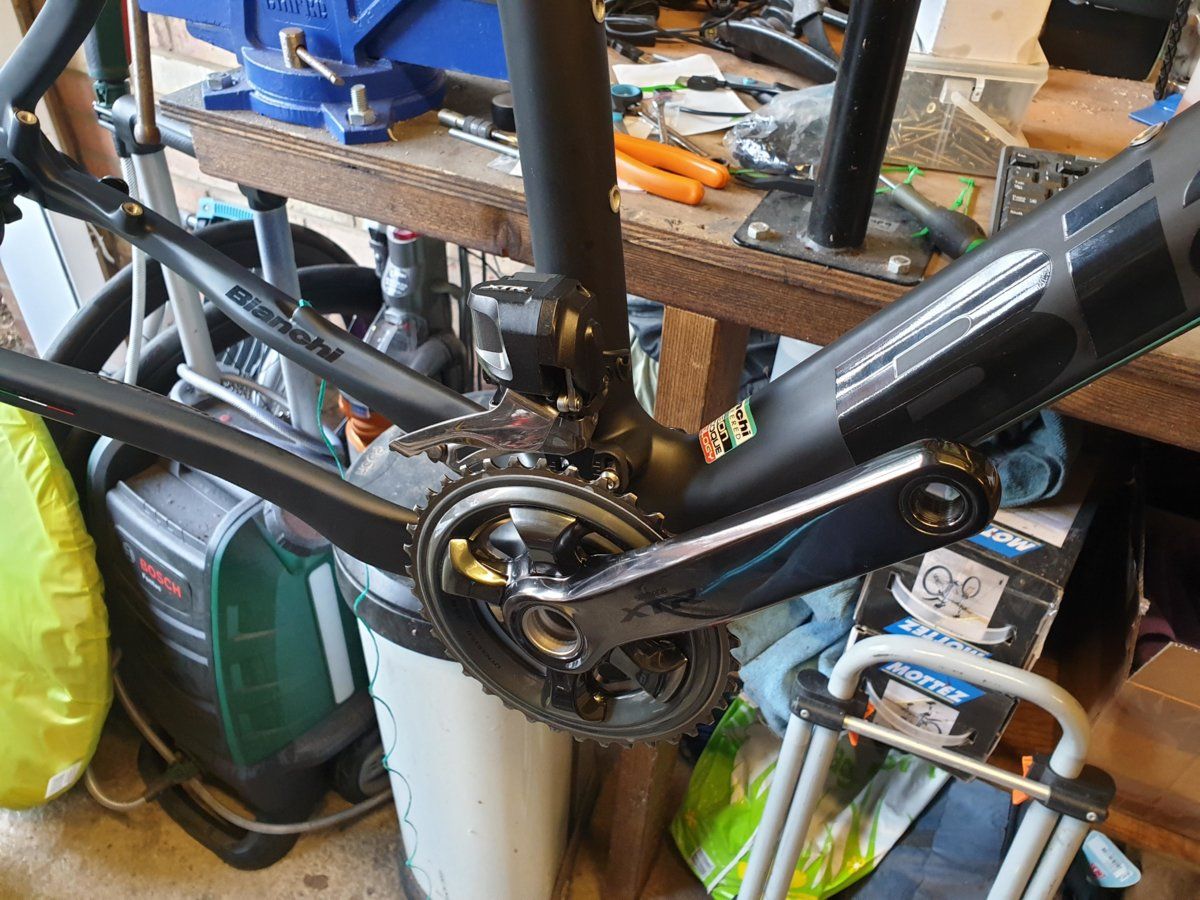 And the rear end, still some bits missing here I think... And the front end. Might end up trimming those bars down a tad 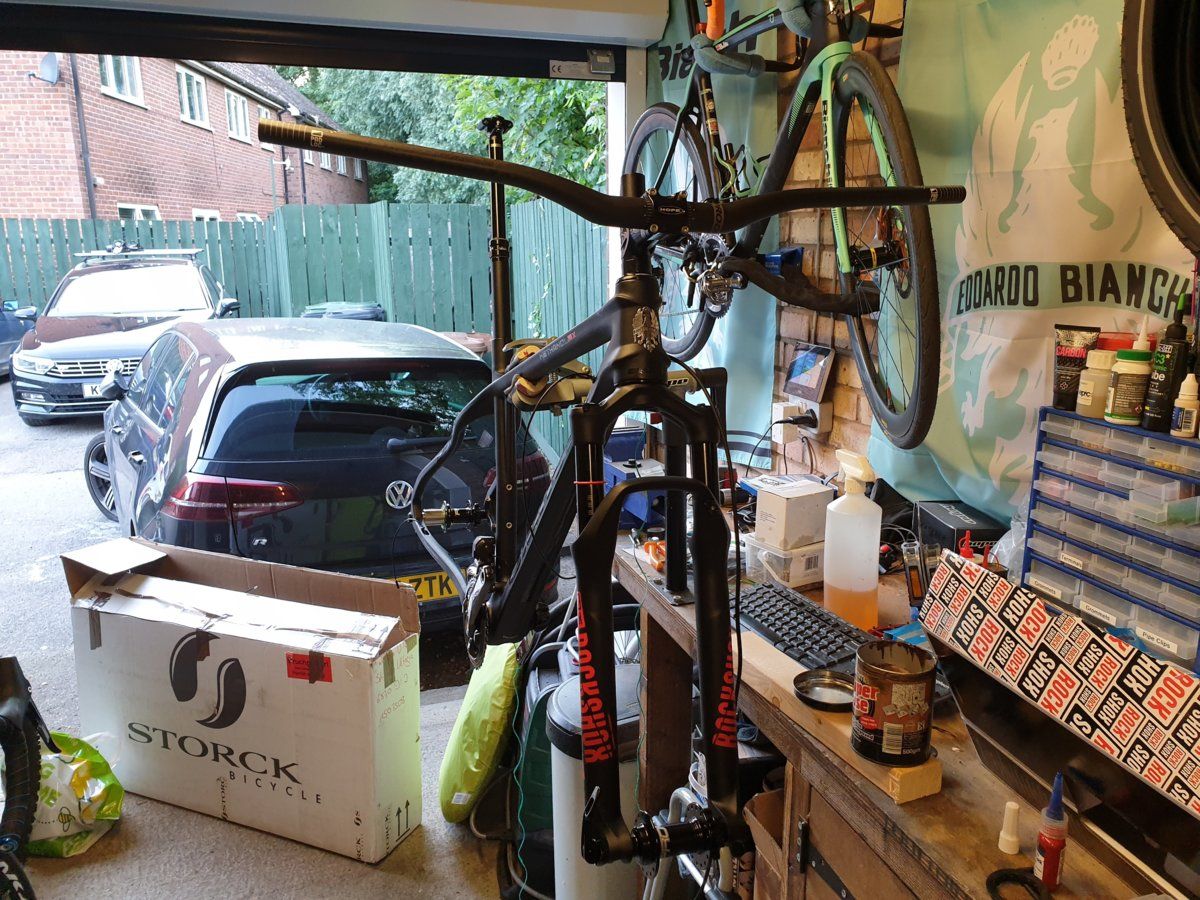 Very nice! And I'm not generally a MTB fan.

Thanks, I'm rather partial to it already

New brakes arrived today along with the Di2 Display. Got the brakes fitted, hoses shortened and working nicely this evening 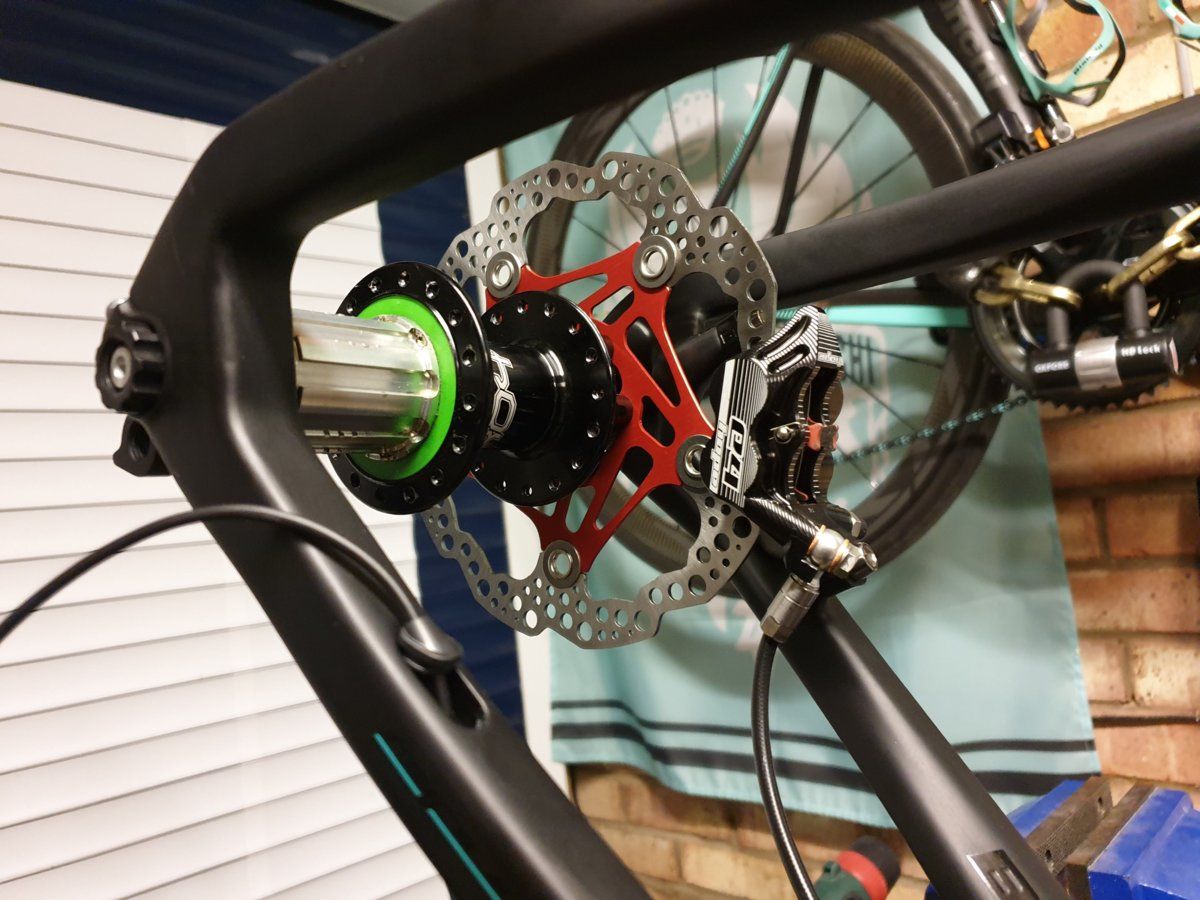 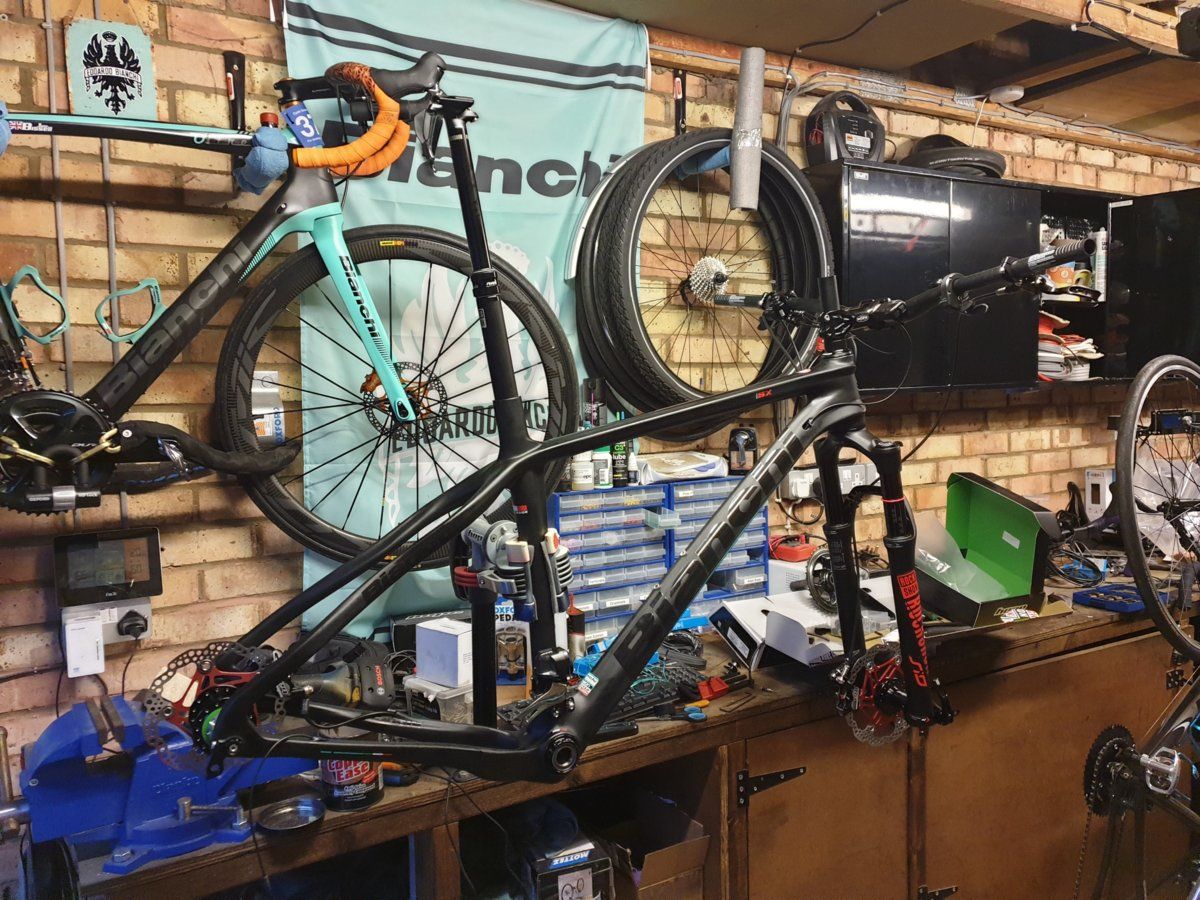 I fitted the display and connected it up - I'm only missing a cable to connect the right hand shifter and the rear mech now. As soon as I plugged it in it beeped at me and lit up, always a good sign

Just ordered some grips and a short Di2 wire to finish the bars off. I also need to work out how to shorten the ridiculously long dropper post hose - it didnt come with any spare hydraulic fittings so I can't just cut it down and bleed it unfortunately, I'll need new hose fittings first

JhnBssll said:
Thanks, I'm rather partial to it already

New brakes arrived today along with the Di2 Display. Got the brakes fitted, hoses shortened and working nicely this evening

Just ordered some grips and a short Di2 wire to finish the bars off. I also need to work out how to shorten the ridiculously long dropper post hose - it didnt come with any spare hydraulic fittings so I can't just cut it down and bleed it unfortunately, I'll need new hose fittings first

i love a self build.....good project that

ive been busy slowly rebuilding my E bike after getting shot of my Di2....theres nothing like a load of parts arriving to bring the little kid at xams out in you lol
You must log in or register to reply here.
Similar threads