Guy Fawkes and the others involved were tried on the 31st of January 1606 and then hung, drawn and quartered in the Old Palace Yard in Westminster.
As Fawkes awaited his punishment on the gallows, he leapt to his death and actually died from a broken neck. Contrary to popular belief, Fawkes wasn't thrown onto a bonfire.

SPY Magazine once sent some of the world’s richest people cheques of 13 cents to see who would cash them. The only people to do so were an
a Saudi arms dealer named Adnan Khashoggi, and Donald Trump.

Manchester
The birthplace of the meat-free diet

Vegetarianism having its roots in a place called the Beefsteak Chapel doesn’t sound very plausible, but thanks to the aptly named Reverend William Cowherd, it seems that it did. The tiny chapel was the place that the cleric preached to his flock about the virtues of vegetarianism, over two hundred years ago.

At a time when many impoverished people were consuming the cheapest meat, the followers of the chapel instead adopted a meat free diet, and went on to form a Vegetarian Society in the city.
OP

Can you provide a source for this?
Honest question/request.
OP

Darius_Jedburgh said:
There is a German War Graves Cemetery in England. Every German from the two wars who died on or near British soil is buried there. It is looked after by our own War Graves Commission, just as we look after all our cemeteries abroad.

It is on Cannock Chase and is a very sympathetic location. I've been, and it is worth a visit.


An infra red photo of the cemetery.
Click to expand...

Reminds me of a dark american service cemetary. Must dig the facts back out of my head.

Blue Hills said:
Can you provide a source for this?
Honest question/request.
Click to expand...

Thanks, will read.
He does have a seriously dodgy reputation.
Seem to remember that he didn't cover himself with glory with regard to michael collins either.
M

On average, your friends are wealthier, and have more friends than you do.

The average person has less than two legs.

Only the Mean average. the mode and median average is still 2.

Do you worry when it's Friday the 13th?
Then you may have paraskavedekatriaphobia (also known as friggatriskaidekaphobia). The scientific terms for fear of Friday the 13th.

Triskaidekaphobia is fear of the number 13. 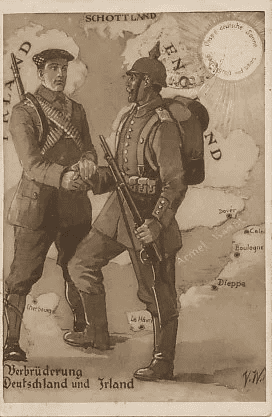 My enemy’s enemy is my friend.
E