I found an old rigid 26" MTB frame sitting on top of a bin the other day, as you do..... No parts on it apart from an old Sachs-Huret rear mech with quite a long cage, so it looks like a MTB mech, not a swapped-on road one.. I want to identify what bike it is, how old it is, and whether the frame is gas pipe or cro-moly. I'll try to take some pictures later and post them up, but in the meantime a description:-.
It had a rattle can spray job, which has now come off when wiped with a rag soaked in thinners, revealing what looks like the original yellow paint. Faint partial Saracen decal shadow in the paint on the R/H side of the downtube. No headbadge fitted and no rivet holes.There's a small square sticker at the bottom of the downtube near the BB on which I can make out the words Saracen, main tubes, MTB, and a reference to a BS standard, the rest is illegible. Welded frame, two sets of bottle cage bosses, seatpost clamp bolt is at the front of the seat tube. Size is 19" from BB to top of seat tube with a 22" long top tube and 425mm long chainstays. Dropouts are vertical and quite nice quality with a circular machined recess in them where the wheel nuts clamp on. Unusual features are a gear cable boss high up on the rear of the seat tube and a rear brake cable boss mounted on a "stalk" welded to the L/H chainstay Forks are conventional welded unicrown and the head tube measures 130 mm tall between the bearing cups. It's an old-fashioned 26" rigid in every way, but it doesn't look like a far-east cheapo effort, so I'm wondering if the material is something like Tange cro-moly?. The downtube sticker isn't a Reynolds style one I'm sure of that. It isn't super-light but it doesn't feel that heavy either.
Last edited: 30 Oct 2018 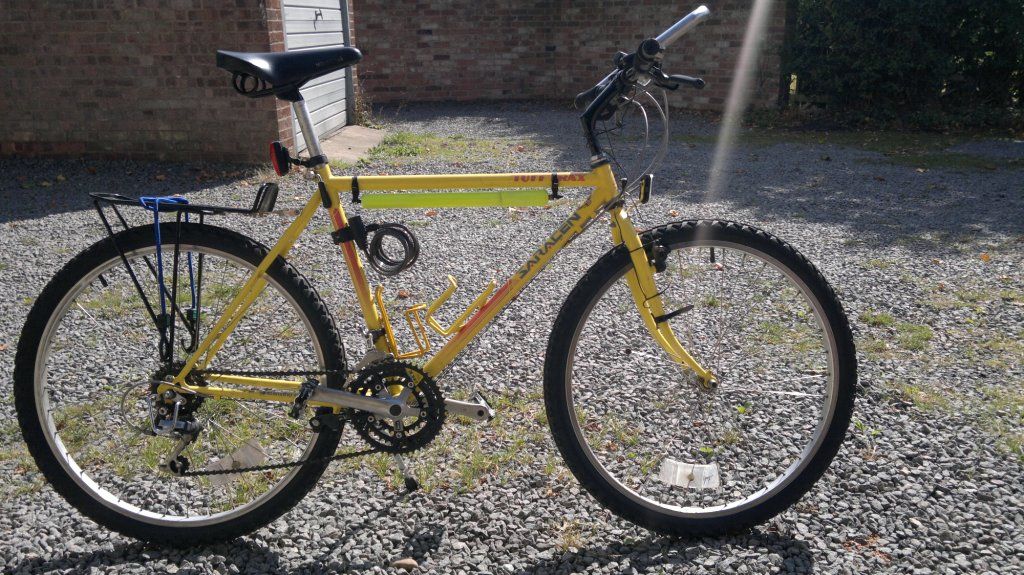 This is my Saracen. It's a 1986/7 Tufftrax. Still with original Bio-pace.
Is yours similar. The yellow is slightly lemon yellow with Shimano Exage groupset. Indexed rear mech but friction front.
OP
S

Yes, the colour is exactly the same, but my frame is a bigger size and the Saracen decal is a different style, is larger and extends most of the length of the downtube. I can't see any decal outline on the top tube. The mechanicals have all been cannibalised apart from the rear mech and the bracket for the front mech. The internal diameter of the seat tube is approx. 26mm. Do you also have a frame tubing sticker, and if so what material is yours made from?
I'm fairly sure from your picture that I have a Tufftrax frame, but possibly not the same year as yours. Were these UK made back then or imports? It looks like a fairly decent quality bike to me, probably cost a fair wedge when new. 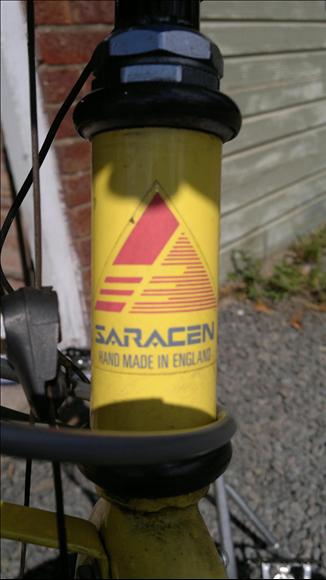 This is the head badge. It is a sticker so no rivet holes. The tubing is chro-moly. I've had to grab pics from a couple of sites I've previously posted them. First is retro bike. The above from velo base.
Last edited: 30 Oct 2018

Thanks for posting that info up, very helpful. I'm certain now it's a Tufftrax frame. Mine has been bashed & scraped a bit so no trace remains of the head badge. I can just see an outline of a decal on my seat tube that looks similar to yours. £340 was a fair whack 30 years ago, that would be about £800 in today's money, so definitely not cheapo machinery!
Looks like it's well worth me building up the frame with some donor mechanicals. I scrapped a tiny sized Trek 850 Mountain Track a few months ago which had some decent quality mechanical bits including alloy seat post and stem. That was also a cro-moly frame so I might be lucky and find the diameters are compatible.

Yes I must do something with it. I've rather a liking for old-school 26" rigid MTB's. The minimalist designs and nimble handling appeal to me much more than any modern stuff with big wheels and suspension.

I hereby add my voice to the chorus of those calling for pictures.

Apart from anything else we're refurbishing a 90's MTB and I'm always looking for ideas to pinch.

I really like the Saracen brand. I have a couple. A 1990 Kili Flier Comp and a 1987 fillet brazed Kili Flier. They are both very well put together frames.

The Comp especially has taken everything I have thrown at it over the years including many races.
OP
S

It's just a frame ATM, and I've only had it a couple of days. I'll have to start trawling through all my donor bits harvested from scrappers to see what I might have lying around that fits. The Trek 850 seatpost is just slightly too big. One from a Dawes frame made of Reynolds 500 slides in easily. Looking at images on the internet, especially on Retrobike, I'm not 100% convinced now it is a Tufftrax. It's very yellow, no question about that, but the rear brake position is conventional on my frame, and not slung under the chainstays. The cables are also routed along the top tube, not the downtube. I just need to find an image that has the right combination of frame fittings, downtube decals, and rear brake position.
Last edited: 30 Oct 2018

Hugh Manatee said:
I really like the Saracen brand. I have a couple. A 1990 Kili Flier Comp and a 1987 fillet brazed Kili Flier. They are both very well put together frames.

The Comp especially has taken everything I have thrown at it over the years including many races.
Click to expand...

I remember when I worked a Halfords in the 1990's we had one around the 200 pound mark, matt dark grey with green and orange markings and a metal badge, and chromo/high ten steel mix. A lovely looking bike and far better than the rubbish steel Apollo Y-frame bike everyone kept buying (against the advice of every staff member from the manager down)
OP
S

Hugh Manatee said:
I really like the Saracen brand. I have a couple. A 1990 Kili Flier Comp and a 1987 fillet brazed Kili Flier. They are both very well put together frames. .
Click to expand...

I've never taken much notice of them up until now, TBH, other than observing that they had pleasing looking steel frames and decent bits fitted. They certainly seem to have a following over on Retrobike, but that is rather a parochial forum when it comes to MTB's, IMHO. They're mad for anything with a Kona or Marin logo on it, yet very few members seem to have less exotic stuff such as Falcon, Dawes or Raleigh - and I'd be prepared to bet Raleigh especially sold more MTB's than many of the niche makes put together.

Some of the better quality and rarer Raleighs have a following there, such as the Max Cromo series, the titanium frames jobs etc. The hideous stuff like the Lizard, Activator etc is almost, but not quite, universally shuddered act.
You must log in or register to reply here.
Share:
Facebook Twitter Reddit Pinterest Tumblr WhatsApp Email Link
Top Bottom