My pick: Deanna Troi, famed counsellor to the stars, never struck me as having any real empathic skills. I’m calling BS on her at long last. 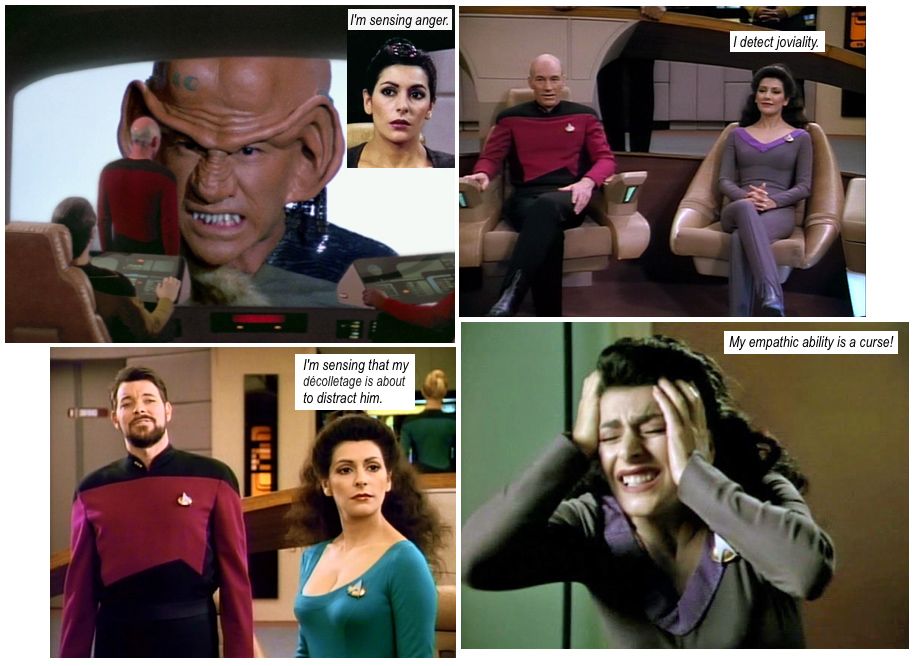 Yep. Definitely Deanna. Or possibly Wesley Crusher in the episodes where they focus on his teenage angst.
Currently in lockdown with my son who is working his way through Star Trek TNG for the first time. He has reached the end of season 3 and won’t let me start Deep Space 9 (my favourite and not watched for a long time) until he‘s finished.

Then I'll pick Geordi La Forge, useless apart from one episode where they used his special vision. Otherwise he was a simpering teenage in a 30year olds body

Although Deanna or if we're going for non-regular characters, Deanna's mother (who is meant to be annoying), are popular candidates along with Wes from some of the earlier parts of TNG, all star trek series improved as they went on. Wes was developed a bit more later on.

Without a doubt it is Reg: 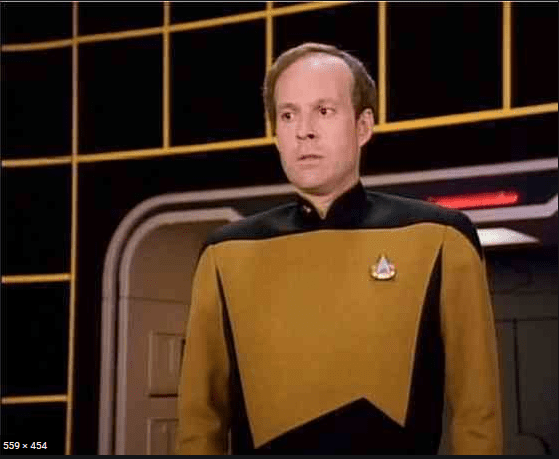 Why oh why did Howling Mad Murdock agree to play him?
OP

Yes, he was narrowly beaten out of Number One spot for me. This is fun:
View: https://www.youtube.com/watch?v=lVIGhYMwRgs

I self-pity the fool who didn't know that was that guy. Thanks for pointing it out.
Last edited: 13 Apr 2020

Location
The Isle of Carl

That Michael woman from the Netflix reboot. Totally unlikable with not one redeeming character.

Most of the aliens from the original series, especially the lizard type ones and ones with a prosthetic arse stuck on top of their head.

anothersam said:
Yes, he was narrowly beaten out of Number One spot for me. This is fun:
View: https://www.youtube.com/watch?v=lVIGhYMwRgs

I self-pity the fool who didn't know that was that guy. Thanks for pointing it out.
Click to expand...

How did I never notice that he did that?!

ColinJ said:
How did I never notice that he did that?!
Click to expand...

It’s something many of us missed.

Speaking of Riker, how did he get to be No. 1? The guy had 0 diplomatic skills - he’s constantly giving aliens an exasperated look. I haven't seen the new series Picard, is there a young Riker, saving Picard's life? (I've never actually watched all of TNG, so it's possible I've missed something obvious...)

As soon as it became apparent that the episode was one of those Data learns something about being a human... I turned it off.

Wesley is a distant second.

For me it’s the Chinese/Japanese ageing Captain in the Netflix series ,

Ffoeg said:
That Michael woman from the Netflix reboot. Totally unlikable with not one redeeming character.
Click to expand...

Watched Discovery season 1. Started season 2 and quickly realised I didn't have a clue what was going on. Too many alternate universes. I gave up
You must log in or register to reply here.
Similar threads