Out on the Hewitt at 10.30am with David from our village. A slightly hilly loop to Thorner followed by a flat loop to Cawood. Great to be out!
41 miles with an average of 13.4 mph. 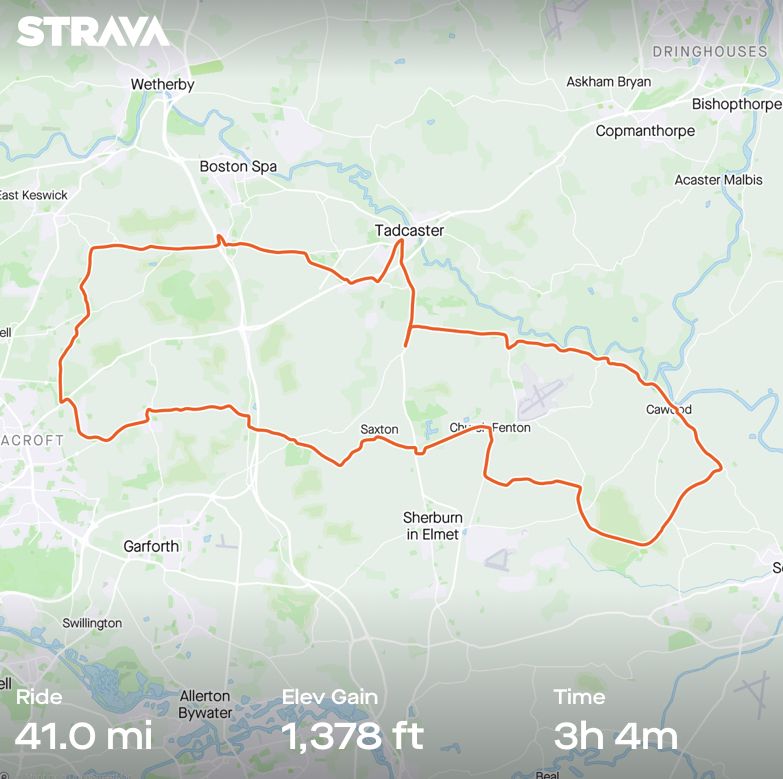 13 rider said:
Normally a 10.6 mile ride wouldn't be much to write about . But I've been off the bike since Tuesday which is not long for some but basically I ride everyday . While on a ride on the 2nd I could feel my back aching not to bad until I stopped at home and went to dismount it felt like I'd been punched in the back . Hobbled into home hunched over . Complete rest the next day and the back began to ease so much so I bike commuted to work on Tuesday on the hybrid much more upright position 16 miles in total . But the back wasn't right and my fairly physical job didn't help although sitting doing nothing makes it worse almost seizing up . So I've stayed off the bike until this morning waited until any frost was gone and the sun was out . Out the door at 11.30 and did my local 10 mile loop out to Swithland and back . The back was ok but getting on the drops I could feel the back so a nice steady ride taking it easy up any inclines . Home with not too much pain but I will certainly be taking it easy for a while longer . The centuries challenges for January are it doubt thankful I got my half century ride in
Click to expand...

(Copied from MHCAM chat zone)
January’s Fondo done with a metric ton loop taking in Tamworth, Nuneaton and some lovely little villages inbetween straddling Staffordshire/Warwickshire. Steady paced, not too hilly and not too icy, my calories were way under what they should’ve been for a ride like this and it showed as I came close to bonking. A schoolboy error but I’d become so fixated with staying in a deficit I never carbed up, stopped off for food nor took adequate snacks with me. Enjoyable no less, but a lesson learned.
https://strava.app.link/DKPPmGlnGmb

As the title says, a gentle re-introduction! Have not been out for a while, lost a fair bit of motivation when my Mum passed away last July, she always asked about my rides and without sounding too dramatic no-one does now (family/friends) so getting out has been a bit of a struggle.
However, enjoyed the little tootle, hopefully its the start of many more miles for me... 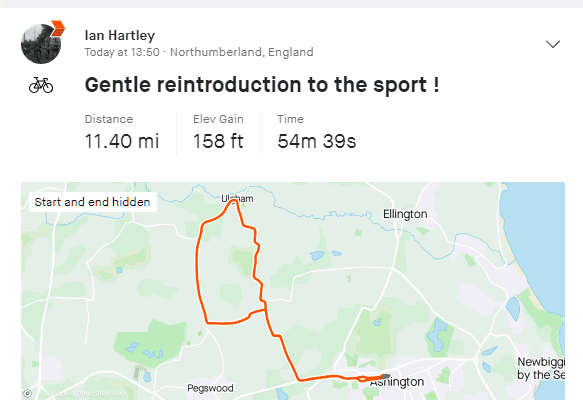 A little bit breezy this afternoon, but the bright sunshine made it impossible to resist a ride after yesterday's rain & gloom all day. No route was planned, but I ended up doing a loop out through Levington and Nacton and a slow ride through Ipswich where the Trinity House vessel Alert was moored up in the marina area 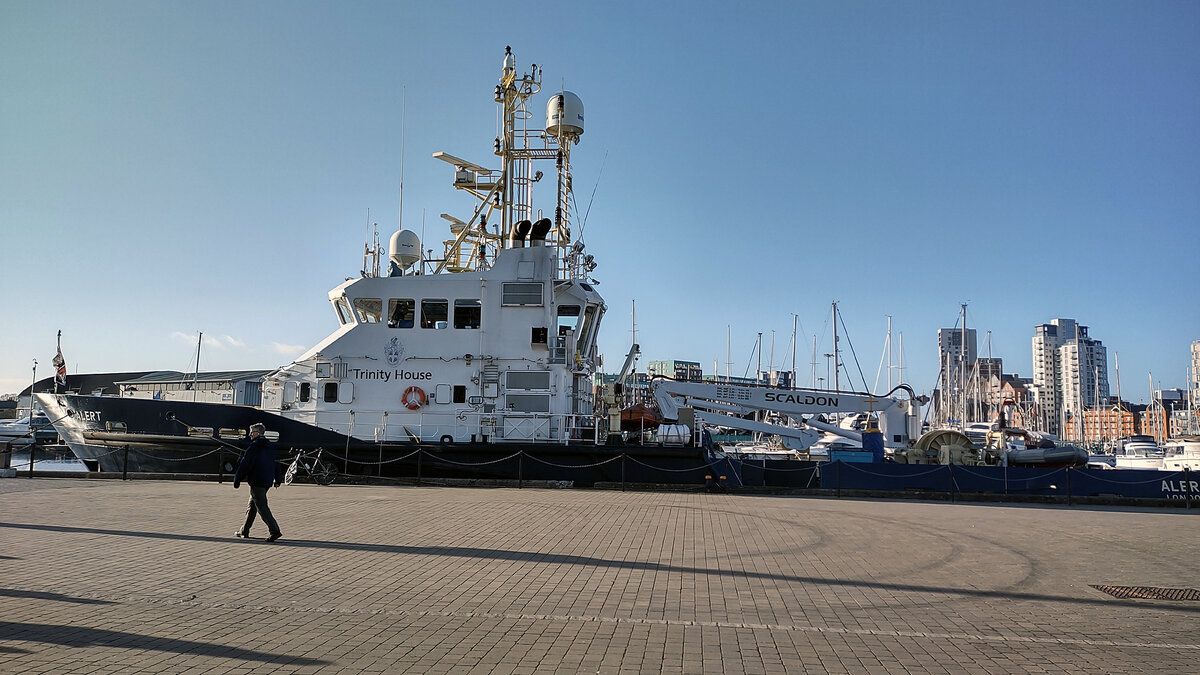 Out of Ipswich up Ranleigh Road and under the A14 on a footpath shortcut, then up to Sproughton, Bramford and Great Blakenham for the first time in a while, over the River Gipping in Claydon 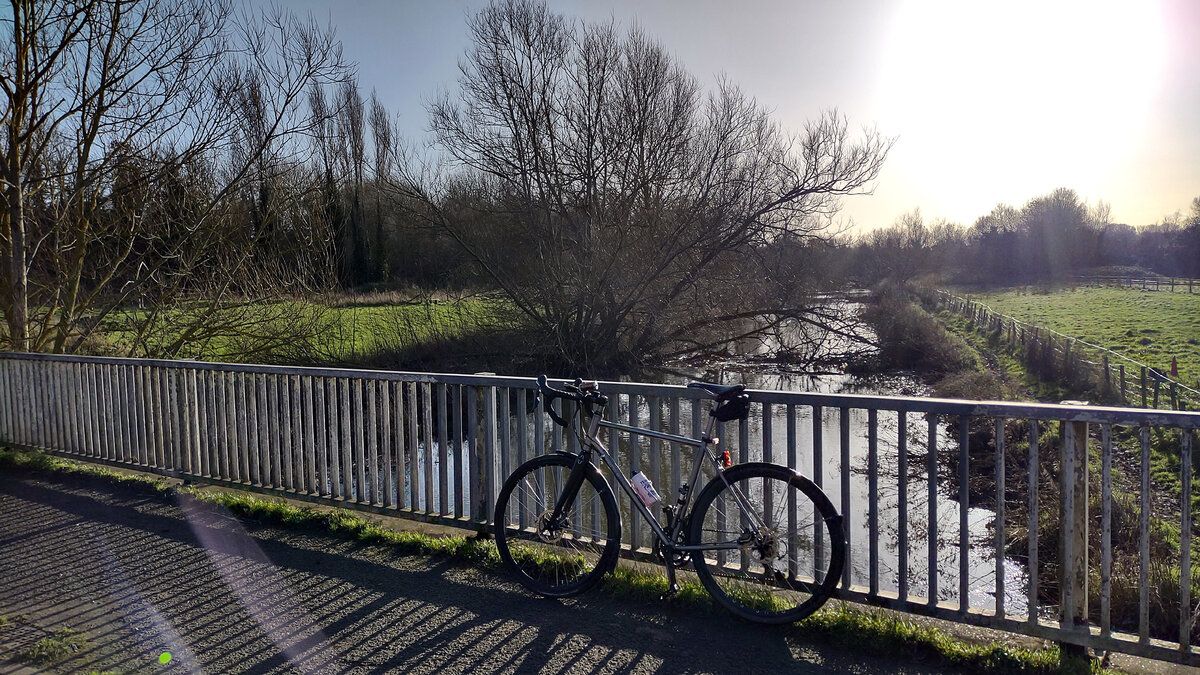 Then back over the north of Ipswich to home via Westerfield, Kesgrave and Bucklesham - a very pleasant 39 miles completed. 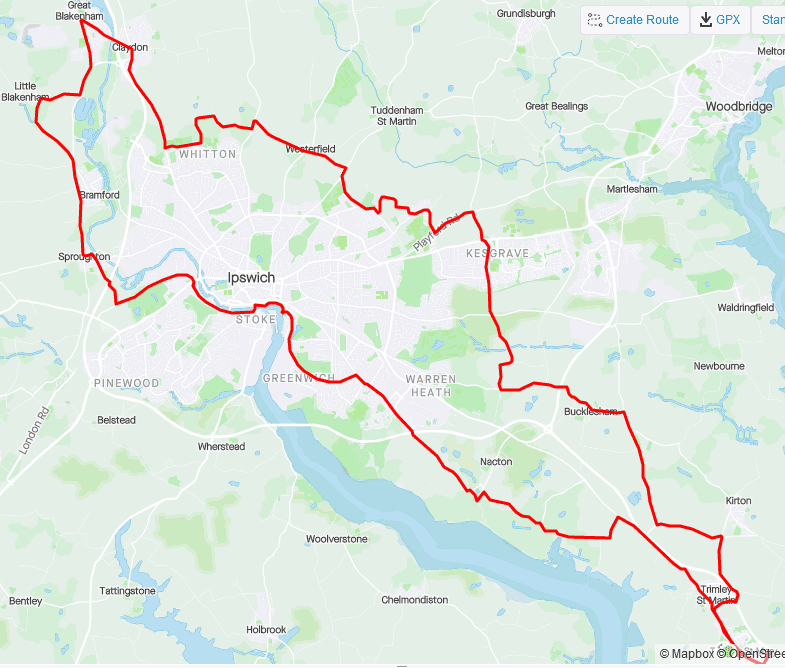 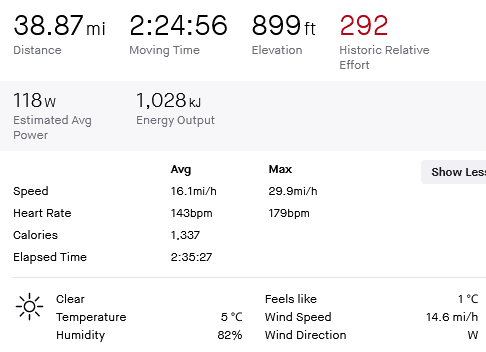 Yesterday was my first ride of the year, only 11 miles to see a friend in need. Wife came along. Must say most enjoyable to get out.

Went out for a ride last week and, well, it was not far. A little warmer this morning, so take the fixed out of the shed and pedal away.

Still cold mind, or maybe I am a warm weather cyclist these days. Anyway, around the usual bit of Holbeck I went, along Great Wilson Street and keep on through Hunslet. After that the road does rise a bit on the way to John o’ Gaunts. Just enough to warm up a bit. A bit further on and turn left onto Holmsley Lane, and something prompted me to turn the camera on.

Down the hill past the railway station and turn left at the bottom, this eventually leads to Woodlesford Lock on the Aire and Calder canal, after a ride through some housing. And the Trans Pennine Way, amongst other identifiers for the same stretch. As ever, this is a peaceful bit of riding, and not much used at all this morning. There were more semi suicidal squirrels than dog walkers this morning. And only a couple of folk riding bikes.

And a couple of boats as well. Not boats, maybe. The things that are raced on the Thames. Anyway, one was travelling in the same direction as me, and I could see the oars. In detail. I have always thought that the blades of oars were symmetrical around the shaft. Nope, the blades hung down from the shafts. Lesson for this morning.

The other noteworthy part of the ride back was the area around the steps at Skelton Grange bridge 6. I did not notice at first, carrying a bike up a flight of steps need a bit of concentration. But, a lot of trees have been felled. Some of them quite large, maybe a yard or so diameter. Seems like some decision has been made about replacing the steps with something more convenient. Crossed fingers here.

More peaceful pedalling to the Armouries followed, and then back on the roads for the final stretch to home. Not the longest ride ever, fourteen miles and 423 feet of up. It was good to be out all the same, have to do it again soon.

And an almost tangled web I seem to have ridden . . . 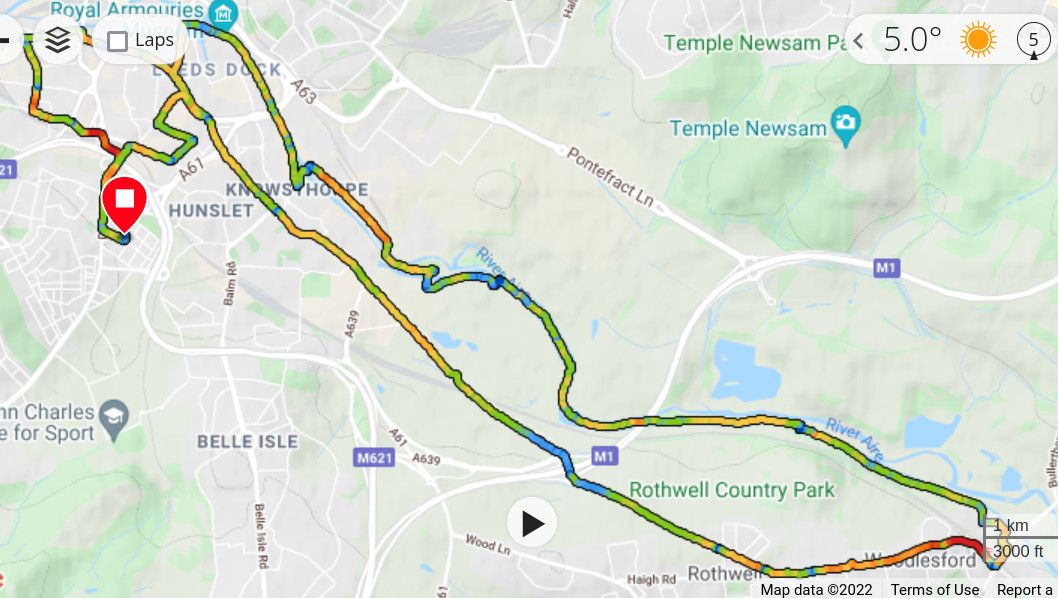 @Old jon funny how the sixth sense prompts caution/camera... that white Citroen close pass, the fun-lovin' criminal pavement parking Audi with the illegal grey plates and then Captain Cockwomble in the Skoda SUV more than justified the cost of the film. A rich seam of potential reporting of driver misbehaviour. Otherwise I hope a safe and enjoyable ride.

well got my first ride in today .. after 2 months of no motivation , was really an errand of mercy. Karon is in the office today and she text me that her brother`s house had a positive test so so that meant her mother in Billingham (has Dementia ) would not see anyone and poss forget to make her self some dinner.
so needs must as they say ... got myself up and out the door ,it was a tad fresh but after a few miles i soon got acclimatized, and it felt good to be out . got there and even managed to work the key safe (dodgy eyes )dont help

. spent a few hours chatting with the oldstick , fed and watered even washed up after too ( highly trained me) then it was time to head back home as the temp was dropping .back the some way almost ,but with a little bit offroad to get away from the traffic . 36 miles round trip and a good deed done

My first evening ride of 2022. Set off about 4:30 and nice to see the evenings beginning to draw out again, as it wasn’t properly dark. The temperature was dipping though, but not much wind which was nice for a change.

I set off down to Meole and when climbing up the shared use path, towards the turning for the village, I came up behind my ex colleague Evelyne, so stopped and had a chat to her.

It was then onto the main road to Hook a Gate and Annscroft, before turning to Exfords Green and then a deviation up to Stapleton Common, to mix things up a bit from my usual route. That lane is always strangely busy, particularly during rush hour, with today being no exception, having to pull in for 5 cars in the space of the half mile or so.

Back onto the usual road to Stapleton, I came across hedge cuttings strewn all over the road, so slalomed through as best I could. Stopped at dads for a chat, before heading out back home. The temperature had dipped even further and there were signs of a frost developing under the starry skies.

After eventually getting across the busy A49, I encountered patchy fog and that continued most of the way home through Condover and along Lyons Lane, encountering 2 cars on the steep climb, as normal

Final section through Betton Abbots was fine, before joining the very busy A458 for the short unenjoyable section and home with 15.66 miles on the clock at 11.7mph avg.

Is that the one that used to be a railway and joined the mainline in Bellevue? Unless I have the wrong Meole of course....

FrothNinja said:
Is that the one that used to be a railway and joined the mainline in Bellevue? Unless I have the wrong Meole of course....
Click to expand...

Not quite that one, but only just down the road from it and I use the one you mean on a regular basis

gavgav said:
Not quite that one, but only just down the road from it and I use the one you mean on a regular basis

Pulley & Hanley Lanes? I've never thought to use them, might give them a go next time I am in town

Arjimlad said:
@Old jon funny how the sixth sense prompts caution/camera... that white Citroen close pass, the fun-lovin' criminal pavement parking Audi with the illegal grey plates and then Captain Cockwomble in the Skoda SUV more than justified the cost of the film. A rich seam of potential reporting of driver misbehaviour. Otherwise I hope a safe and enjoyable ride.
Click to expand...

Yup, that road is usually bordered with dog walkers, and has very little traffic at all. A bit of a surprise to have so much going on. Most of which I did not notice, except the idiot driving in braille. The joys of riding through dormitory towns are few . . .

Day taken off work and an early to mid afternoon ride to Boroughbridge on the Defy – its new mudguards generally okay; a few annoying noises but I think was more stuff stuck between a tyre and a mudguard. Did think the rear one was playing up until I coasted and the noise stopped, um..maybe the chain needs oiling

Outbound via Beryl Burton to Knaresborough where I apologised to a pedestrian (who was still stood on the pavement); I was heading down grade on Boroughbridge Road in the high 20s when a pedestrian crossing immediately ahead went red and the brakes simply were not up to stopping in the available distance

North to Farnham then east through Ferrensby and Arkendale to cross over the A1 joining the A168 to Boroughbridge and a pause in the riverside park.

The return was more of a toil, generally a headwind and now pretty low sun ahead which was making reading the Garmin 530 difficult and for the Varia a Wahoo in such conditions is better IMO as the LED warnings are normally visible.

Via Minskip and Staveley to Farnham and then Scotton to Ripley and Killinghall. Only stopped twice on the return, turning right onto the B6165 after Scotton, and turning left onto the A59 after Killinghall. 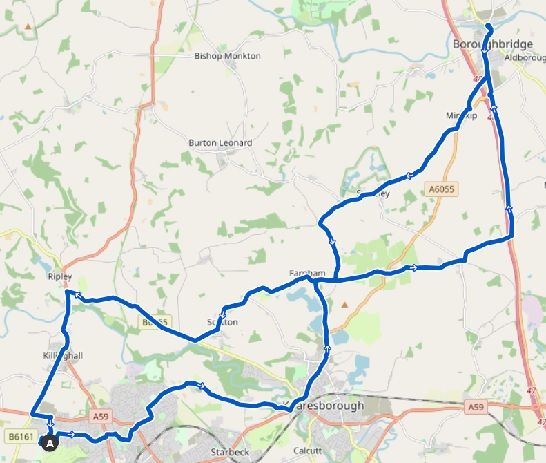 Last edited: Thursday at 08:22
You must log in or register to reply here.