Old roads are the ones best ridden, @matticus

From a SPI-M 'ready reckoner': 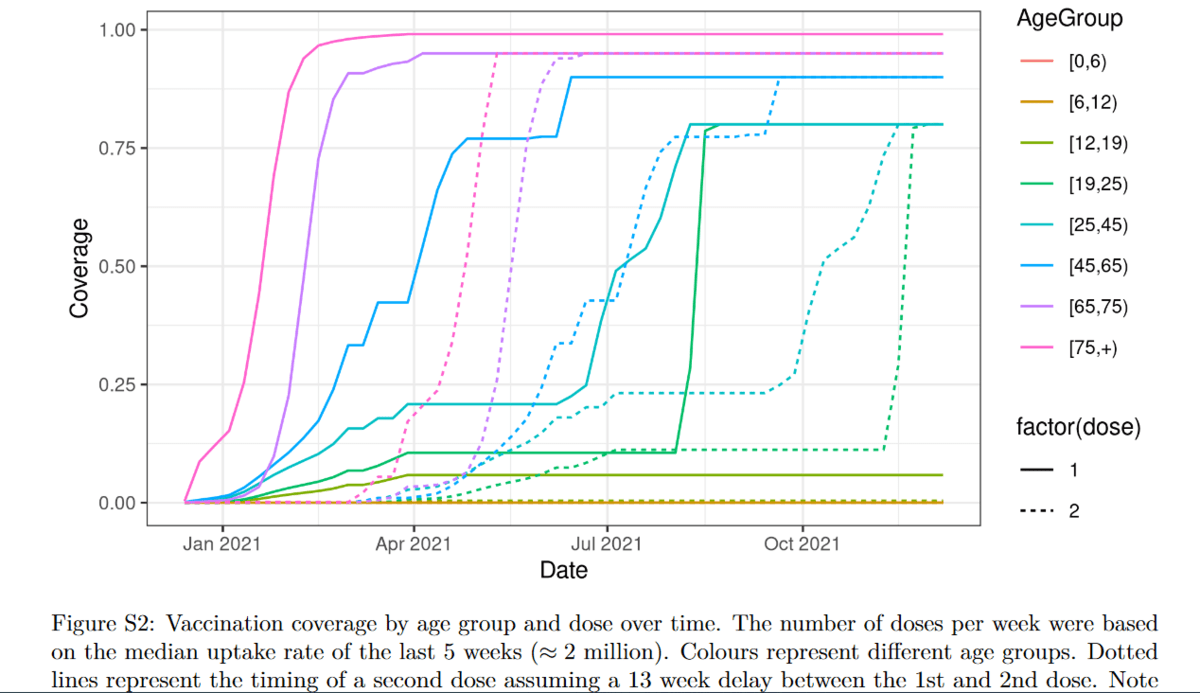 Comment: This assumes a pedestrian 2.0M doses available per week from early Apr (but the image is still useful imo, just dates 'wrong'). Other SPI-M modelling uses the assumption directed by the Cabinet Office of 2.8M per week. Note that current weekly dose delivery (based on 7-day average) is 3.6M. This also gives an idea of the percentages in the younger age groups who were given a first jab in Jan-Mar (those in JCVI Gps 2, 4 or 6). Those percentages are not ones I've seen shared elsewhere.
Edit: I've found this (authority unknown) on percentages received second dose.
It's to one decimal place so it must be accurate

I have been busy today, it's a crazy time in my job.

But one thing has been bothering me about some of the comments around the HCP should know everything, while the victim patient should be responsible for nothing.

If the woman in the story that sparked all this, or clearly those members of the population who don't know which their first jab was, well how they can be so sure the second dose didn't match, they don't know what they are matching to

Craig the cyclist said:
I have been busy today, it's a crazy time in my job.

But one thing has been bothering me about some of the comments around the HCP should know everything, while the victim patient should be responsible for nothing.

If the woman in the story that sparked all this, or clearly those members of the population who don't know which their first jab was, well how they can be so sure the second dose didn't match, they don't know what they are matching to

The Pfizer one was considered unsafe, leaving only the Oxford-AstraZeneca one. The only two in use in the area at the time, simple elimination would give the same result.

The thing you have to take into consideration is that as good as you think your memory may be, it may well differ from what's in your records, which you hope are correct and in use. At the least, they've been checked before giving any treatment.

AstraZeneca reports COVID vaccine sales of $275 million
(Reuters) - AstraZeneca said its COVID-19 vaccine contributed $275 million to first-quarter sales and shaved three cents per share from its earnings, as it posted better-than-expected results and forecast growth in the second half.

AZ has given financial details of the distribution and sales of its vaccine, which it developed with Oxford University. It has said it will not make a profit from the shot during the pandemic. Vaccine revenue included delivery of about 68 million doses [as at what date not clear; 31 Mar?], AstraZeneca said today (Fri 30 Apr), adding that sales in Europe, where it faces a legal case, were $224 million, in emerging markets $43 million and $8 million in the rest of the world
Sales of $275 million for 68 million doses suggests around $4 per dose (averaged).

For those who've had their second shot this week.

Has anyone had an appointment booked for a third in six months time?

My second jab is booked for Tuesday in Derby Velodrome. However just seen a headline in the local paper that 3,000 appointments are being canceled for next Tuesday at the Velodrome due to vaccine shortage. We will see. Not heard anything yet but i guess it takes a while to contact 3,000 people.

lane said:
My second jab is booked for Tuesday in Derby Velodrome. However just seen a headline in the local paper that 3,000 appointments are being canceled for next Tuesday at the Velodrome due to vaccine shortage. We will see. Not heard anything yet but i guess it takes a while to contact 3,000 people.
Click to expand...

Did you book it online? Is there a mechanism to check through the website?
...apparently so, there’s a manage my appointment function
https://www.nhs.uk/book-a-coronavirus-vaccination/do-you-have-an-nhs-number

Mrs CR got her first moderna dose this morning.

vickster said:
Did you book it online? Is there a mechanism to check through the website?
...apparently so, there’s a manage my appointment function
https://www.nhs.uk/book-a-coronavirus-vaccination/do-you-have-an-nhs-number
Click to expand...

Thanks I had a look at that but it just said I am not eligible to book for a second dose! I am not really very worried I will wait and see if it is cancelled - it said in the paper that anyone canceled would get re booked Saturday the 8th so no big deal.

lane said:
The Doctors booked it for me. I can't look at the appointment on that system. I will wait and see no big deal.
Click to expand...

Ah...I did ask if you’d booked online (I can’t see any details around my second either as the first was organised through a vaccination centre (GP) not online
C

I was told three times that I was getting AZ, before the needle got stuck in me, including being offered a leaflet tucked inside the SPC for the medicine I was getting explaining the changes that have been made recently, and being asked for my card with the batch details of the medicine stuck on to it, under the label which clearly stated AZ from the time before. The team checked that.

Also on the computer were my details which had the dose on from before. I know it happens, trust me I know, but getting the wrong dose in a MV centre is not easy without some serious lying going on. It may be more likely in an LVS or a pharmacy, but the big centres have the checks in place.

The smaller and less well resourced the site, the easier it is for a mistake to happen, so all those calling for nurses going round on bike jabbing anyone and everyone wherever they can be found, be careful what it is exactly you are wishing for. I can already hear the clamour for peoples heads if that roll out happens and the opposition say 'how could this have been allowed to happen?'

I had not seen this so share it (my precis).
More than 700,000 AstraZeneca doses 'secretly' flown to Australia from Britain
8 Apr 2021 (The Sydney Morning Herald)
Australia’s vaccine rollout was helped by 717,000 AZ doses manufactured in the UK rather than from factories in Europe as widely inferred. The need to source jabs from the UK underscores the difficulties Australia and AZ have faced in extracting supply from the EU under the bloc’s tough export controls. Not a single AZ dose has been exported to Australia from Europe (31 Mar). The first 300,000 UK-made doses landed at Sydney on 28 Feb. Another batch from UK arrived in March, after Italy and the European Union blocked the export of 250,000 doses.

UK has sent vaccines to its overseas territories such as Gibraltar and the Falkland Islands. Who knows which other countries, besides Australia, have received AZ vaccines made in British factories? The UK has domestic production capacity, but its early programme was reliant on vaccine imports from Europe. The UK also received 5M AZ doses from SII Puna, India in March.

Australia had received (Q1) more than one million doses of Pfizer vaccines from the EU. AZ had told Australia it could only provide 1.2M doses in Q1 instead of the expected 3.8M. However only 717,000 doses – the ones from the UK – had arrived (@31 Mar). AZ is producing the vaccine at no-profit for the duration of the pandemic.

More than 50 million AZ doses will be made 'domestically' in Melbourne ( CSL-Behring Australia and Seqirus) under licence from AZ in 2021 however only 1.3M of the forecast 2M doses were released by 31 March (expected 1M a week from April onwards). Most of the early vaccine supply (?1M but reports vary) was sent to Papua New Guinea (another ex-British colony).

Comments:
1) By 1 May Australia had given a first vaccine to about 2M people so this points to CSL production not ramping up as well as they'd hoped. This experience of difficulty reflects that of the plants in Europe and the UK.
2) I am surprised, given the reported capacity of the two AZ plants in UK, that the UK vaccination programme roll-out has been hampered by lack of supply, unless a proportion is being exported (not to the EU).
Last edited: 2 May 2021

then there are these morons. went for my regular 6 month dental cleaning. when done I chatted briefly w/ the Hygenist & I said how happy I was to be fully vaccinated, & then the she told me she had no intention of getting vaccinated at which point I changed my appointment to someone she knew has been vaccinated. as I checked out at the reception desk, the other 2 ppl behind the desk, also told me the same thing. I said really? in a Doctor's office? after all we've been thru? then hiding behind a plastic divider & face mask one of them started to rant about how there are so many other ways to die & that even ppl that have been vaccinated will die & her religious faith ... I wished them luck. I will not be going back to that office. I think now I know why my favorite Dentist for the last 30 years had had enough with "the company" he sold his practice to: Mondovi Dental

rockyroller said:
even ppl that have been vaccinated will die
Click to expand...

While sympathising with your mini-rant I picked up on the quote above.
Modelling (considered by UK's SAGE fed in by SPI-M) suggests that in UK in the next hopefully suppressed wave# (wavelet

) of those who tragically succumb (having had a positive test within 28 days) there will be more who have received both doses of vaccine (+7 days before positive test) than deaths of people who have not been vaccinated. This is based on a function of the IFR for the older (fully vaccinated) cohort versus a much younger (no underlying conditions) cohort (eg under 30s) and the protection from disease afforded by the various vaccines (90% protected = 10% not protected). What's the take-away? People need to manage the (albeit low and decreasing in UK) risk to themselves and consider, for summer 2021 at this stage, whether there are situations/environments and social behaviours they could choose to eschew without much sacrifice.
#BBC, 30 Apr: Prof Van-Tam said while vaccines could reduce a third wave of coronavirus, it was "inconceivable" that there will not be further bumps in the road. "The modelling consensus is clear, we will have what's called a third wave," he said, but he added he was hopeful it "might just be a third upsurge and much less significant" due to the vaccine rollout.
Last edited: 4 May 2021
You must log in or register to reply here.
Similar threads