Have a good one, wind looks perfect for you.

On my way. Hoping we've dealt with the rain quota last weekend....

Just ridden down to London for the start, from... Cambridge.
All dry here, light wind. Should be a good night.

Wish I could have done this one. This has been a hard week and I'm needed at the weekend...

Went rather well. Tailwind all the way, no major mechanicals, arrival ETA of 8.30 proved spot on. On the 9.44 direct to Kings Cross, so hopefully back home at one or so. More to follow later...

Completely redundantly, I took one for the team again on the way home from Mordor Central. After a warm, dry night I've just been soaked for the second time, in a spectacular deluge that caused plenty of exciting flash flooding and took my shoes from dry to full squelch in under ten minutes (remember this is on a recumbent, without the benefit of water trickling down your leg).

For those wondering about the stripes on the cyclepath:

In 2005, as a celebration of the 10,000th mile of the national cycle network, Cambridgeshire County Council and Sustransjoined forces with the Wellcome Trust Sanger Institute to create a DNA-inspired cycle path. The path, which runs from Addenbrooke’s Hospital to Great Shelford, is decorated with 10,257 colourful stripes which represent the four nucleotides of the BRCA2 gene.

BRCA2 (Breast Cancer Type 2 susceptibility protein) was discovered at the Sanger Institute by Prof. Michael Stratton and Dr Richard Wooster in 1995. This tumor suppressor gene binds to and regulates another protein to mend DNA breaks. Mutations of this gene produce short proteins that are unable to repair broken DNA and can lead to the development of various cancers.
Click to expand...

That was a good one. Nice to see people again, a good route with some lovely riding in the early light, and the bonus for me of getting home and to bed before midday.

Here's a pic of the double helix at the Shelford end of the DNA path. Shame I missed the ride :-)
Looking forward to trying the Whitstable one though! 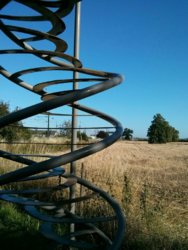 Despite being biased, I think the ride to Cambridge went very well, after a 3 year gap. The change in road infrastructure in London from 2016 was very evident, meaning we were often on no-through roads, or segregated lanes, meaning a much improved experience heading north-east out of the city.
The new route also meant we avoided the boy racer crowd normally experienced through Epping Forest, by going through Chigwell, and then we were out in the countryside, with gentle ups & downs and lots of wildlife.

I saw only my 3rd live badger in 14 years of doing night rides, along with bats, owls and deer. Comments about Essex having a lot of night life must be true. Having said that, despite a lot of cloud cover, the sun was never far below the horizon, with it starting to get light before 3am.

The one downside to a more easterly route was that the half-way stop at Birchanger Services was more than half-way, so some people were struggling a little bit by then, but at least there's a convenient bail out station nearby.

It was 6 am by the time we left the services with only 27 miles to go. Last minute, I'd put in a couple of minor changes to make for straighter roads so in the end we arrived in Cambridge on schedule at 08:30 where local knowledge from Rob meant being able to leave the bikes at the back of the Wetherspoons.
In the end we had 14 first-timers come along which is impressive and I was very pleased that some of them also joined in and helped with the way-marking which eases the pressure on the other volunteers. A special well done to 12 year old William for his longest ever bike ride. Thanks also to Adrian for "All-Upping" and especially Greg for valiantly dealing with the sole mechanical issue due to broken glass.

It did seem like very slow progress out of London, even discounting the puncture delay, but I suppose that's the nature of cycle infrastructure: Lots of stop-start traffic lights and the like. I also find it relatively hard work in a group, because you can't really see what's coming next (it's probably a bollard and a 90 degree turn behind some bushes or something). The traditional Dun Run route is quicker, but as you say - avoiding the boy racers of Epping Forest is prudent. The cycle path on Lea Bridge Road is a very welcome addition - wish they'd had that when I was living in the east end.

Like the Maldon ride, some excellently chosen lanes. This time with a more rolling flavour - just enough short sharp climbs to keep you paying attention, without qualifying as proper hills.

The final run into Cambridge was flat, warm and acutely allergy-inducing. I'm wondering if I got a face full of pollen from a rider in front clipping some of the undergrowth on one of those stretches of cyclepath or something.
C

A fantastic ride with a lovely route and very sociable crowd and thank you to the ride leaders and all uppers.
Really enjoyed my stint waymarking in the morning,and managed to avoid the rampaging Essex Deer.
One question, is the Hatfield Heath the same one we pass though on the Maldon ride as it would make sense to do the half way stop at the café there rather than at the services.

Chrisbpr said:
One question is the Hatfield Heath the same one we pass though on the Maldon ride as it would make sense to do the half way stop at the café there rather than at the services.
Click to expand...

Thought it was,if the Cambridge ride happens again might it be an idea to ask if that tea room could open for us rather than lining Starbucks coffers....just a thought

After the Friday Night Ride to the Cloisters last year, the other blue university city this year. And not coastal again, but first destination that begins with a C, I think?

Having missed the only prior installment, I was keen to attend this time round and put that right. Usual 2130 making-no-time finish at work, usual dash to the train eight minutes later, thankfully with usual result. Another ten seconds and I'd probably have missed it, but even then the 2208 still gets to Waterloo in plenty of time if so. Hung around the arch opposite Costa for a while, but none other of tonight's gathering seemed to have gone via there, so round to the NT a bit earlier than usual, where a sizeable number, not all of them from St Neots CC (though it seemed almost that way!) were waiting.

Early stretch was indeed a bit slow for multiple reasons, but thanks to Rob's puncture we got to appreciate a rather splendid bit of street art just off the Lea Bridge Road (sadly, Street View doesn't have it), by the artist Joe Furlong. Amy took pictures so hopefully she'll post them. Definitely more pleasant than the Dun Run route (as least as I remember it...), though we did go past the very Essex nightclub on Woodford New Road that route also takes.

The first not-half definitely took its toll on some of those less used to the mileage, not just young William. A few of the St Neots gang had the need for speed, so decided to return home at somewhat higher speed. Hopefully, they'll all be back some time. Along with @arallsopp (it's been a while since he made it, and he's missed!) who managed to recruit a neighbour. A couple of others decided a train was their best option. Starbucks proved a perfectly adequate spot for restorative purposes, rather better services than J31 (OK, damning with faint praise there....) though I'd agree with @Chrisbpr on investigating the Hatfield Heath possibilities for this as well as Maldon.

By the time we left Birchanger, we were well behind anticipated schedule, but those last-minute changes seemed to work out very well. And always nice to travel on cycling infrastructure that doesn't suck. Wetherspoons provided usual adequate breakfast, and I settled for just the one drink refill before heading round to the station for the KX service (I'd bought the ticket already, opting to spend the four quid over the Liverpool St variation to get home quicker). The train was on the platform, but the doors were locked (despite the frantic button-prodding from people who still don't get that doing so does not work, ever). Fortunately, they were eventually opened, and I got on. Got to sit on the floor with the Litespeed in the vestibule, as it was very busy. When I was on board, I spotted our old friend TMN on the platform- presumably headed the same way- but she didn't make it on (I tried waving but she didn't see me).

Trip from KX to Waterloo was even more of a horrendous slog than usual, thanks to multiple roadworks, and I missed the intended service down south. But not too long for the 1130, and then bed ASAP....

Thanks one and all. Am not on the tour, and acts of flaming German rock preclude York-Hull, but I'll be there for Eastbourne. Apparently it's a bit hilly. Never have guessed, I don't know that area much do I?