Home improvements - time the house had some TLC!

Thanks mate, very kind of you

I dont think I'd be able to make any money as a builder, I'd take far too long

I'll potentially do a bit more digging next, maybe lay a few edges of block on this side, before I get a grab lorry in to get rid of the spoil. It would be good to get it all gone in one, but that in itself is a logistical problem because I need to dig down under the spoil pile

Its not just a case of letting the grab lorry to the work this time, as the gas main is down there somewhere and I'm not feeling all that lucky

I hosed the steps down yesterday afternoon, I think they look rather splendid when they're wet 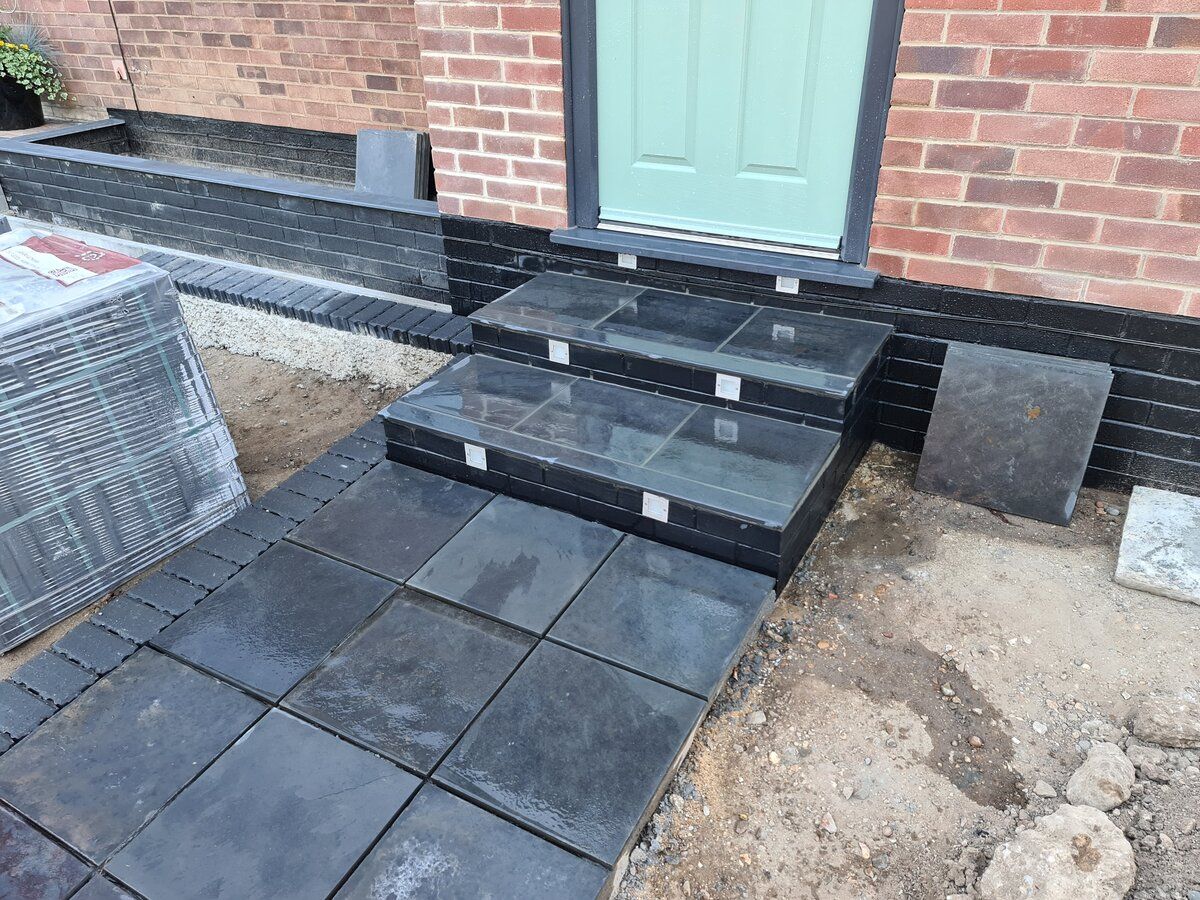 And here's the current state of affairs... 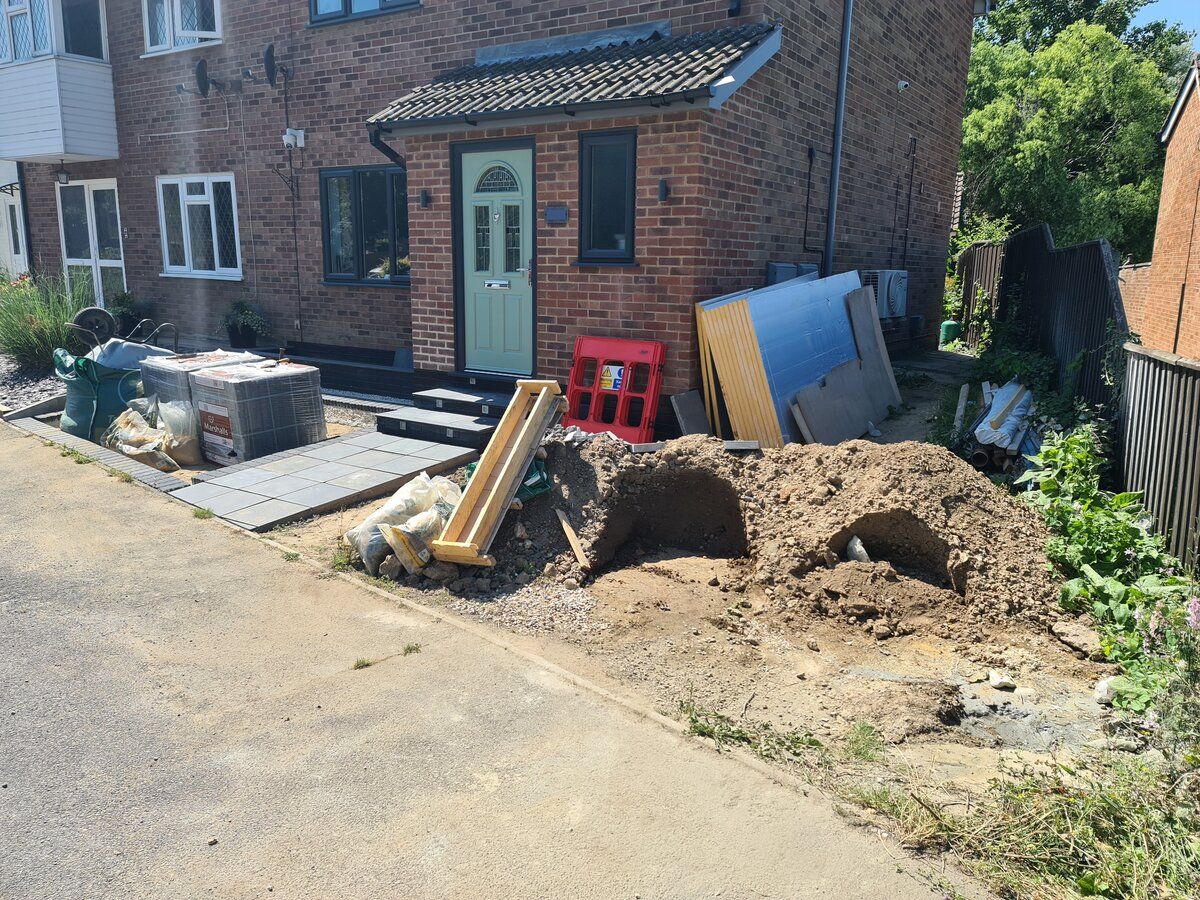 I'll get the insulation and some of the other detritis moved in to the back garden this afternoon hopefully so I can plan my next move... I have several slate tiles left over so I am considering working them in down the side, potentially at the back of the drive by the new fence/gate that I'll be building.

I can see the back garden being the next project, because I've positively ruined it

Most of the patio needs to come up anyway to extend the drain for the new loo, but the lawn is also wrecked and the decking has seen better days

I have very similar slate, albeit with a lot more ‘rust’ in it. Be very careful in the cold - they are lethal with even a tiny bit of frost. I laid 50m2 of it and had to re-lay a couple as you are completely right, they don’t like staying in place.
OP

I spent a few hours out front after work this evening. First dug a trench down the other side of the path then mixed some concrete and laid some blocks. I managed 3 mixes before I had to call it a day in time to shower and go out for dinner. I seem to be living life perpetually exhausted at the moment

Good to be making progress though, however slow 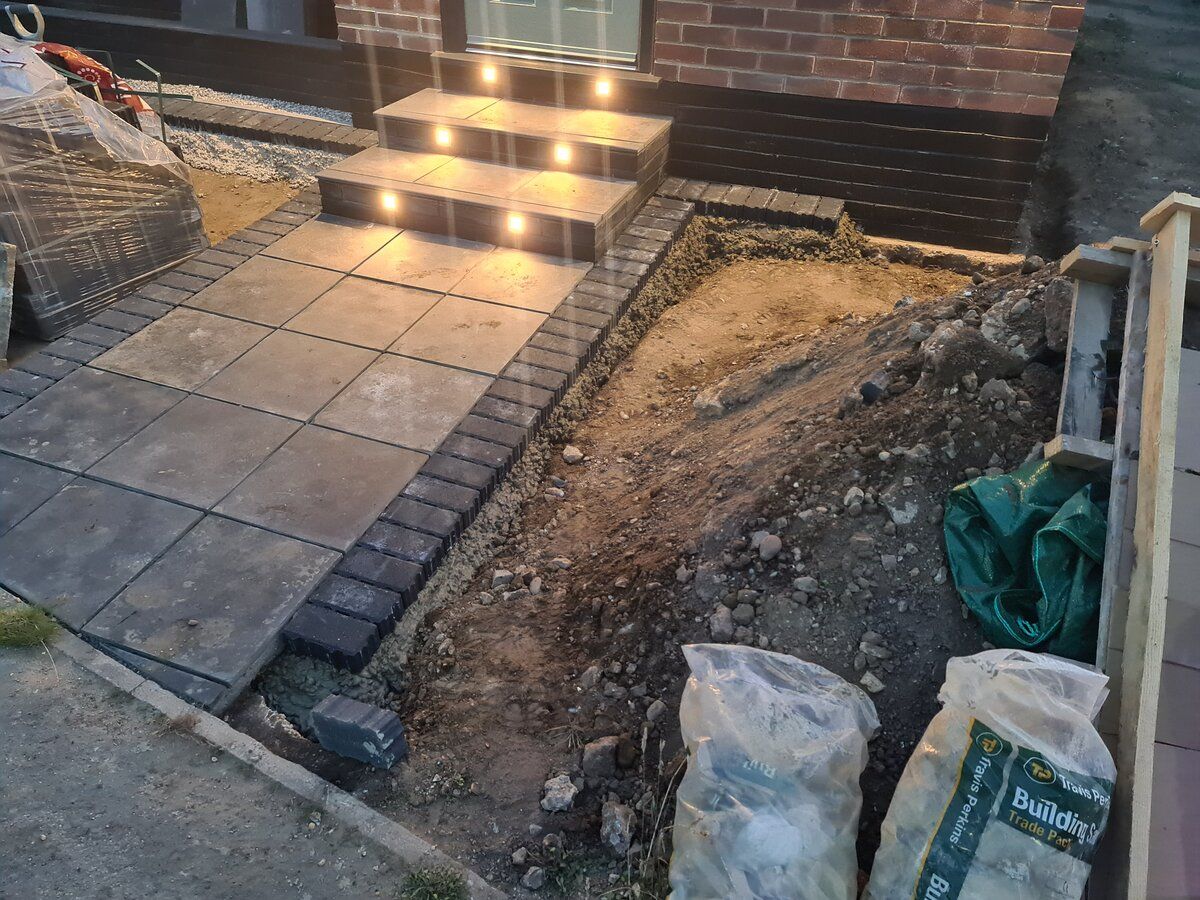 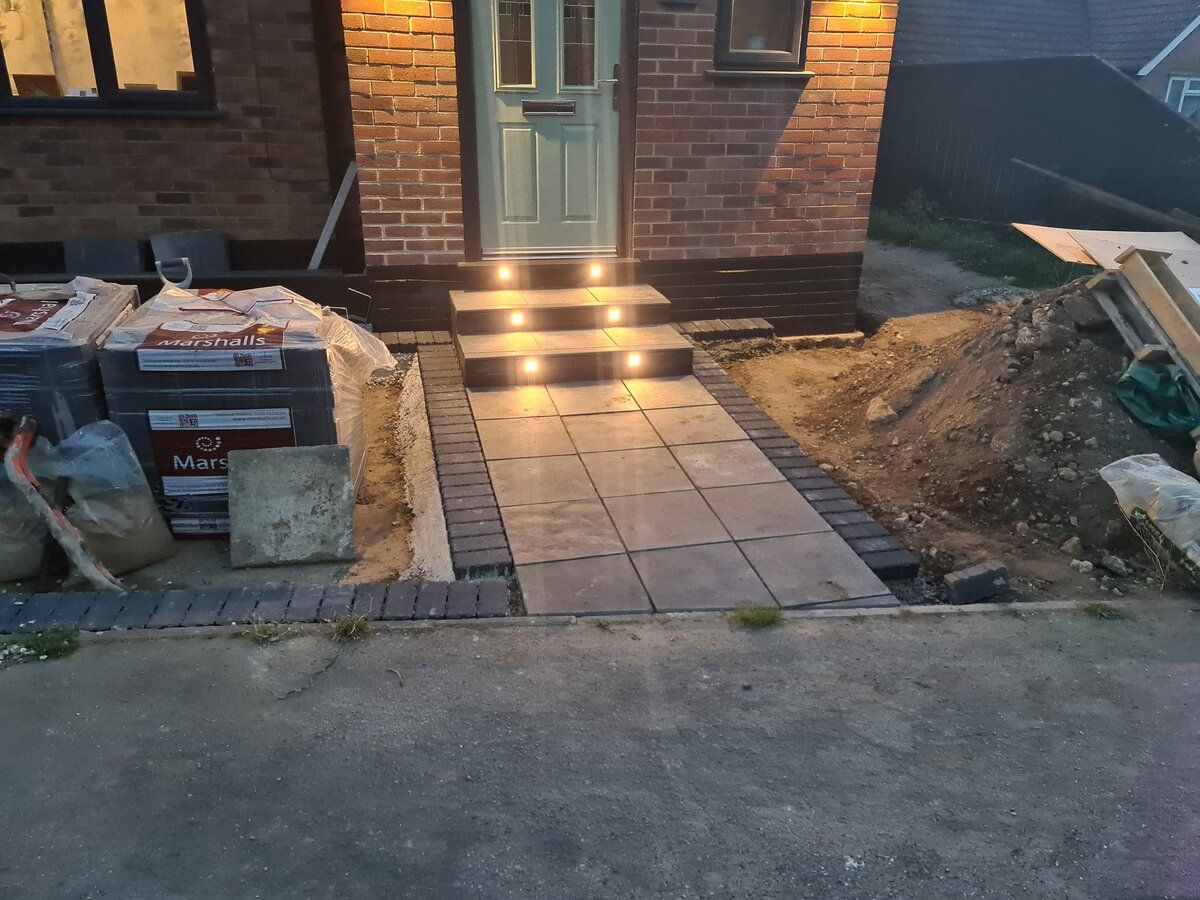 I'd have laid them in a curve.

DaveReading said:
I'd have laid them in a curve.

Far too advanced for me I'm afraid

Too advanced for me too. I hit things with a hammer, and then hide the mess bynusing silicone sealant to glue something over it.

It works, but its hardly craftsmanship!

I doff my hat to the skills and committment of Jhn 'Darcy' Bssl.
OP

I had a bit of a tidy and did a bit of digging after work this evening. I've booked the next muck-away for Tuesday so plan to get as much rubble on the pile as I can before then to minimise the next load

I'll be glad when I can hang the mattock up for a while!! 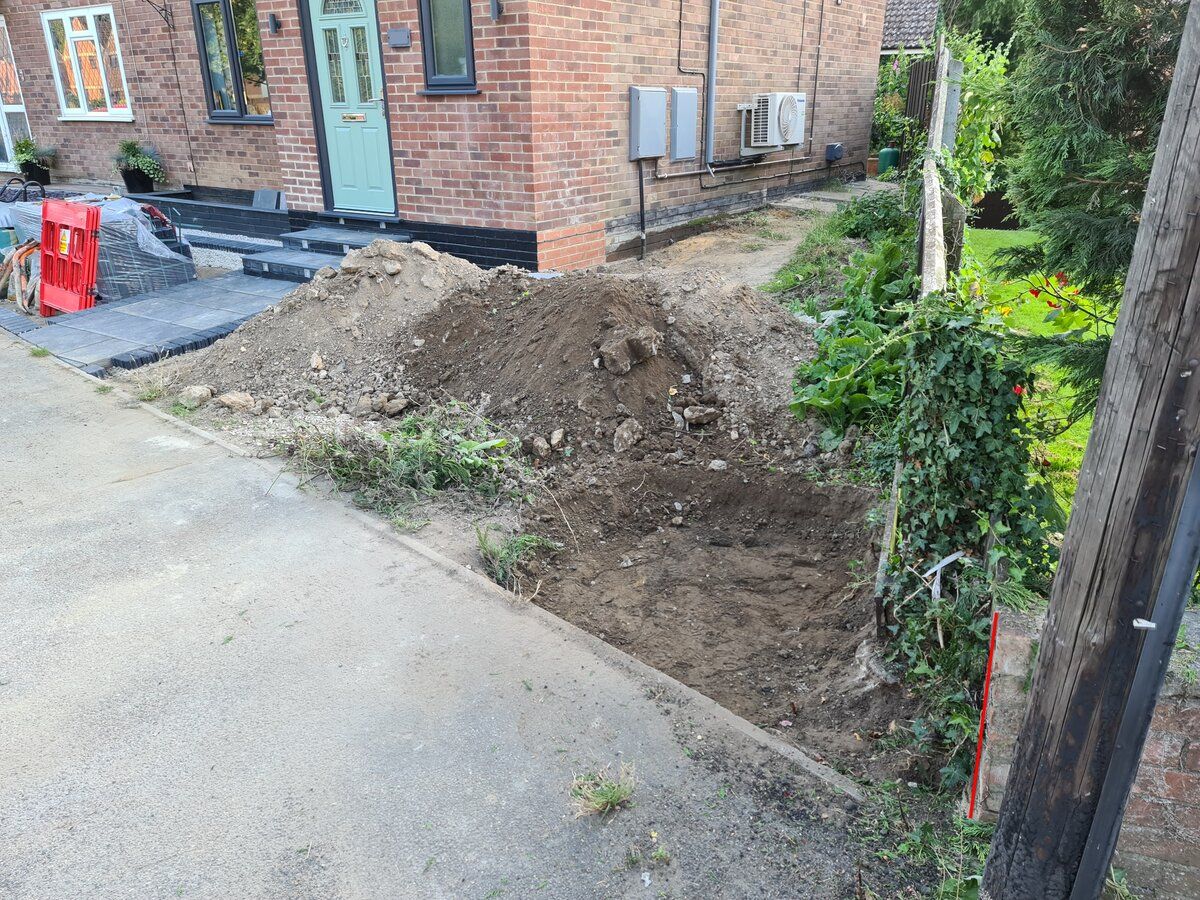 I cant remember if I've already mentioned it, but a recent chat with the neighbour revealed the fence is actually ours and isn't in the right place - I've marked our real boundary with a red line along the edge of the wall in the bottom right. I reckon I can get an extra 6" all the way along the fence-line when I replace it, valuable extra room for opening doors when there's a car parked there! The neighbour is happy with this as the boundary is at the top of a retaining wall, he isn't losing any useful area by putting the fence back where it should be, only gaining a new fence

I'll be painting the bricks along the side below damp course soon too, the insulation had been in the way before now.
M

Installing new skirting board over my insulated and reconditioned floor.
We chose the most wiggly ogive shape in MDF. For inside joints you use profile cut not mitre. Cutting the profile of the wiggly shape at the end is a pita. MDF does not cut as cleanly as wood. I fired up the dremel to do fine shaping.
I might have to strengthen the cut shape with pva glue.
Youtube is not much help

What paint will you use to paint below the damp course?

Drago said:
What paint will you use to paint below the damp course?
Click to expand...

I've been using Zinsser AllCoat, seems to do a decent job and gets good reviews

MichaelW2 said:
Installing new skirting board over my insulated and reconditioned floor.
We chose the most wiggly ogive shape in MDF. For inside joints you use profile cut not mitre. Cutting the profile of the wiggly shape at the end is a pita. MDF does not cut as cleanly as wood. I fired up the dremel to do fine shaping.
I might have to strengthen the cut shape with pva glue.
Youtube is not much help
Click to expand... 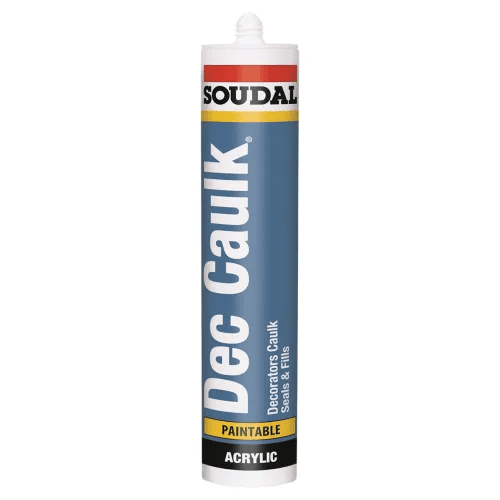 I've just read through this thread, and it's very impressive, well done to you.

I need a nap just from reading it.

I did some more digging today, my mound of earth and rubble is getting mighty impressive 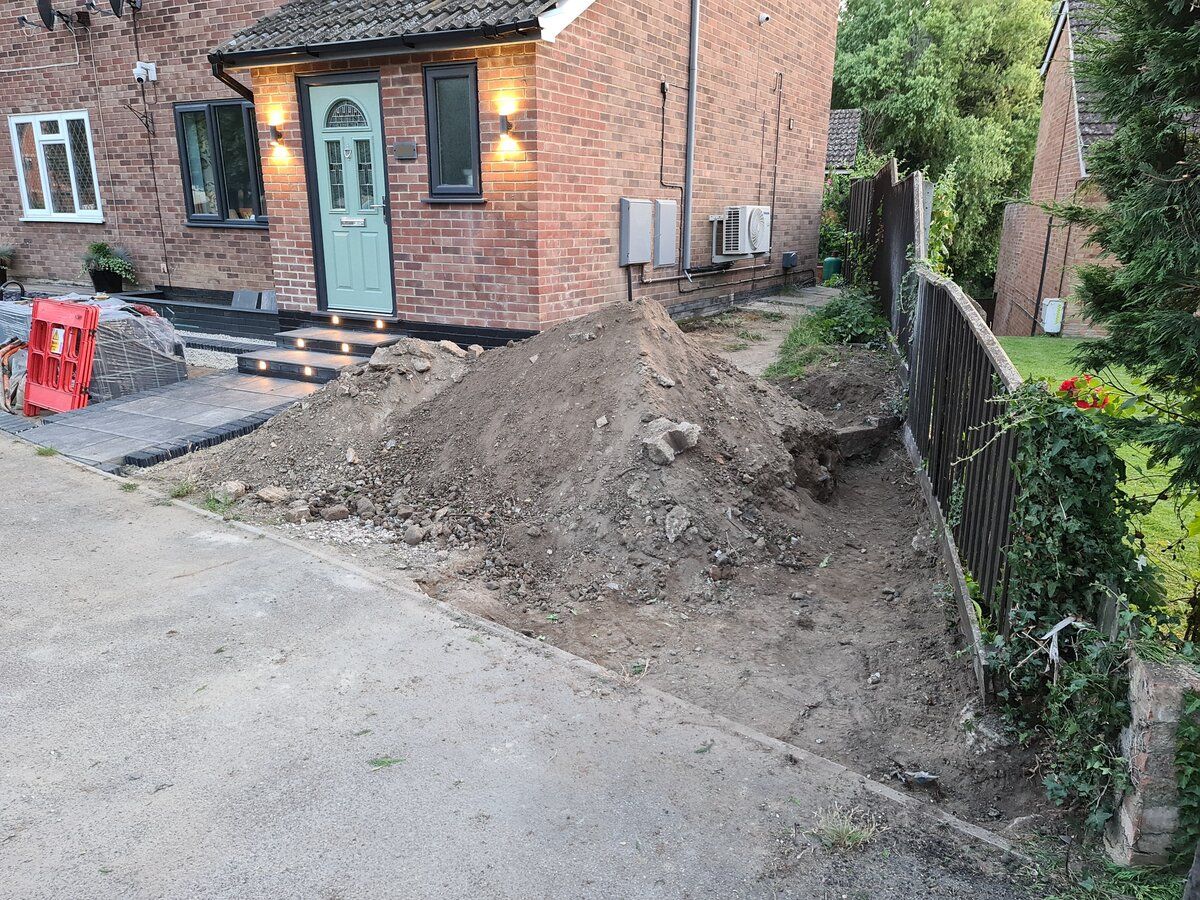 You can just make out the new buried wall I found this afternoon too... 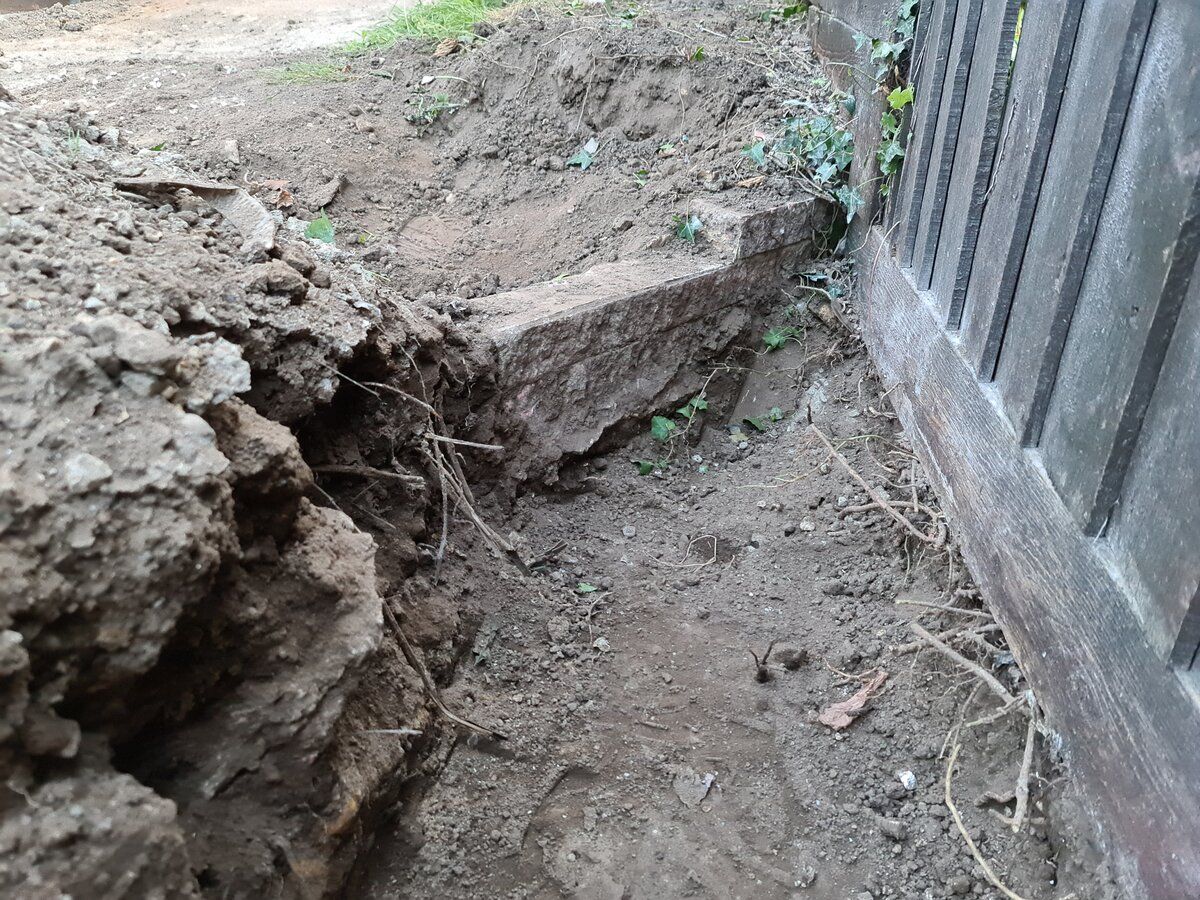 Excited to get this lot taken away, it will feel like the home stretch when all this digging is done

Well, for the driveway at least... Then there's just the kitchen, the hallway and the downstairs loo to sort...

With lots of rain forecast over the weekend I thought I'd get out early and repair an error I made last week... In my haste to dig around the footings I'd forgotten to expect the incoming service ducts and put my mattock through the electricity duct 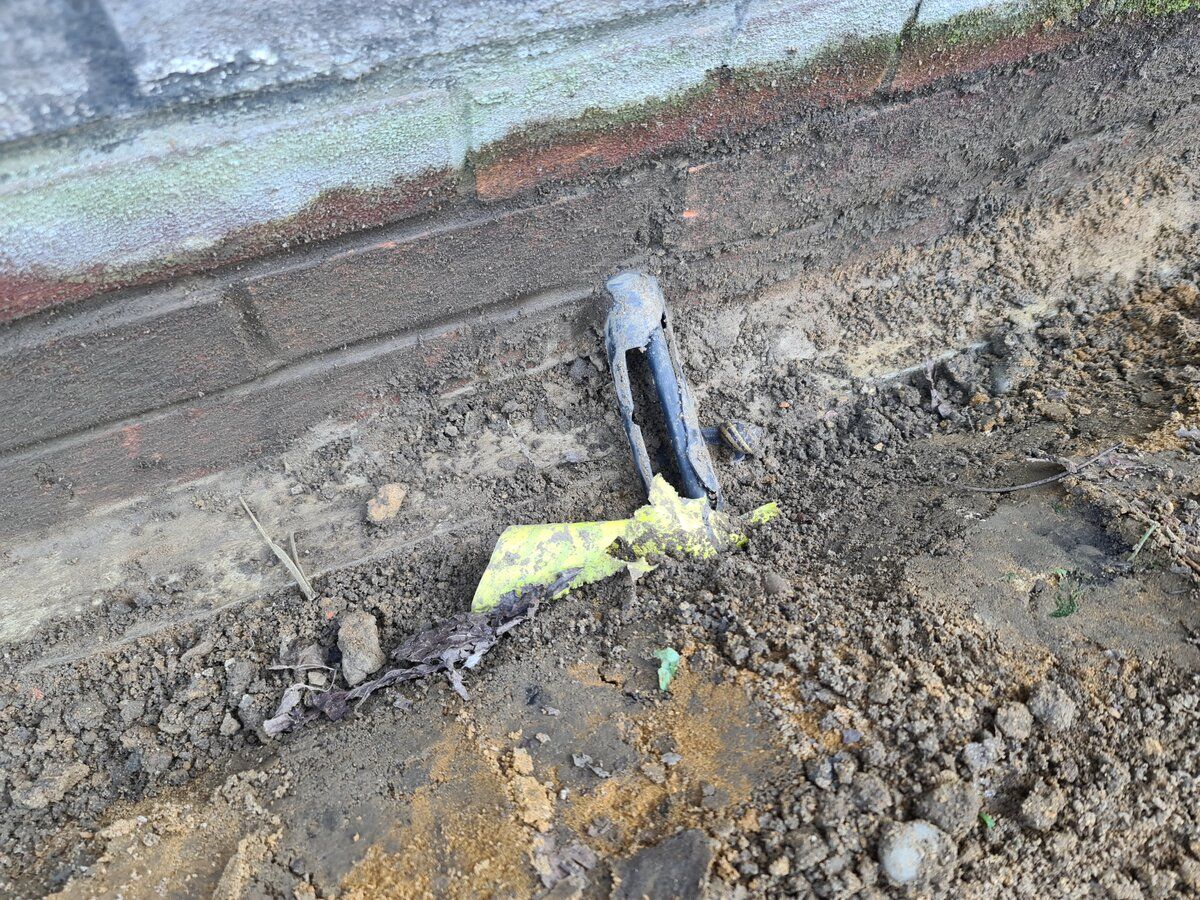 I didn't touch the cable fortunately, but didn't like the idea of the duct filling with water and causing problems in the future so figured I'd repair it with some fibrefix wrap. The plan was to dig around the duct a bit and create some room, then find a few more of the broken shards of plastic and put them back where they should be before wrapping with fibre fix.

That plan very quickly changed when I dug a bit further and found this... 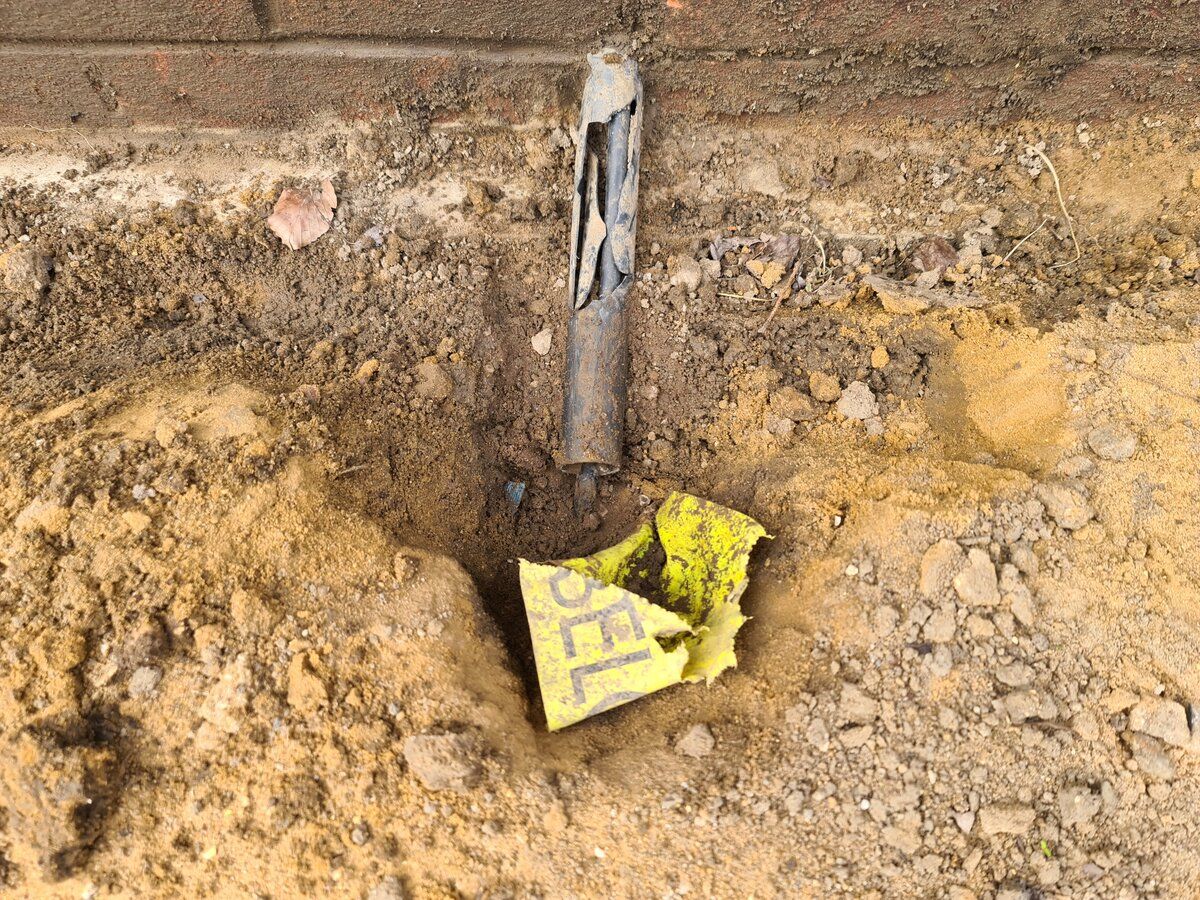 Back to digging then!! I've continued my trench alongside the fence - the plan here is to remove the fence at some point and build up a concrete block retaining wall alongside the original retaining wall to sure it up a little. The original doesnt go as high as the ground level on my side of the fence which is odd, so my new one will give the driveway something to perch on and prevent it ending up on next doors lawn in a few years time 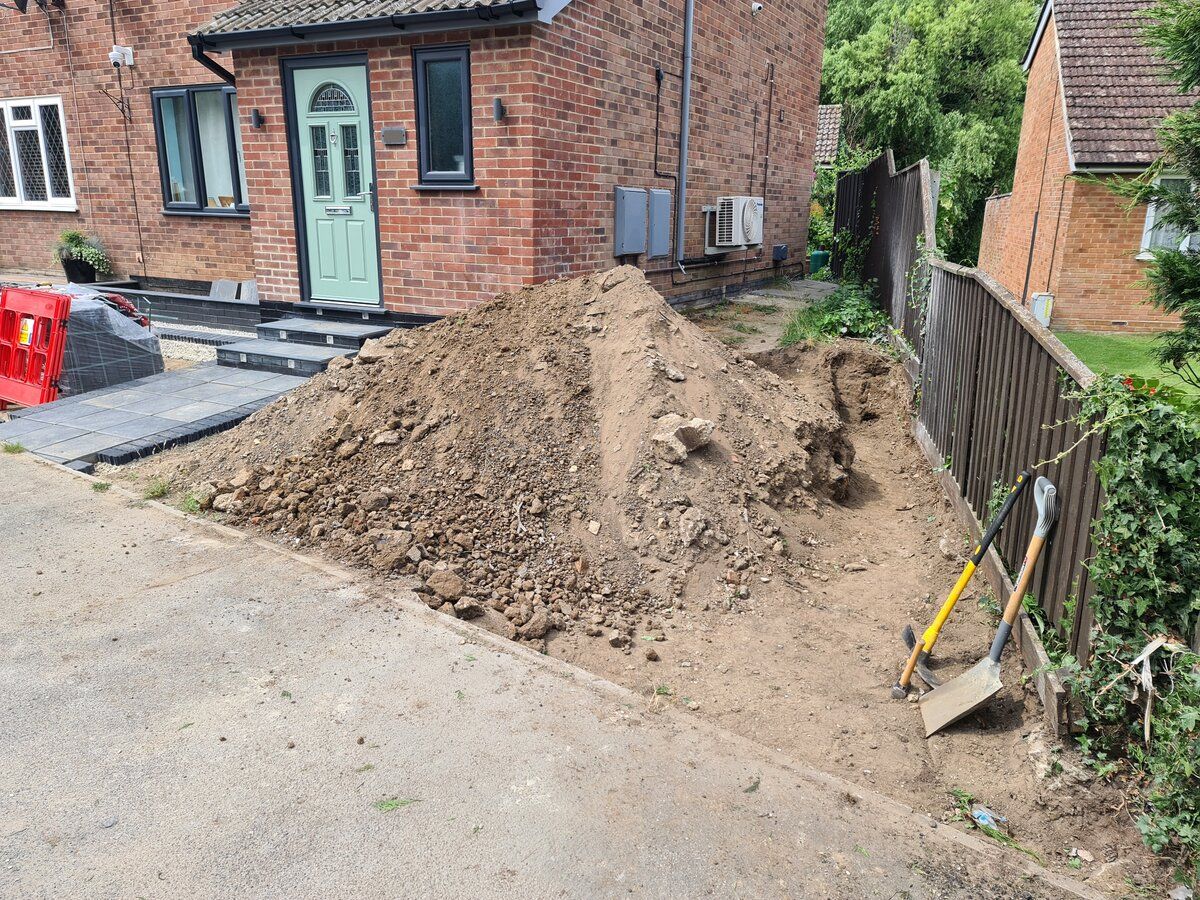 I though I'd found trace of an animal tunnel at one point... 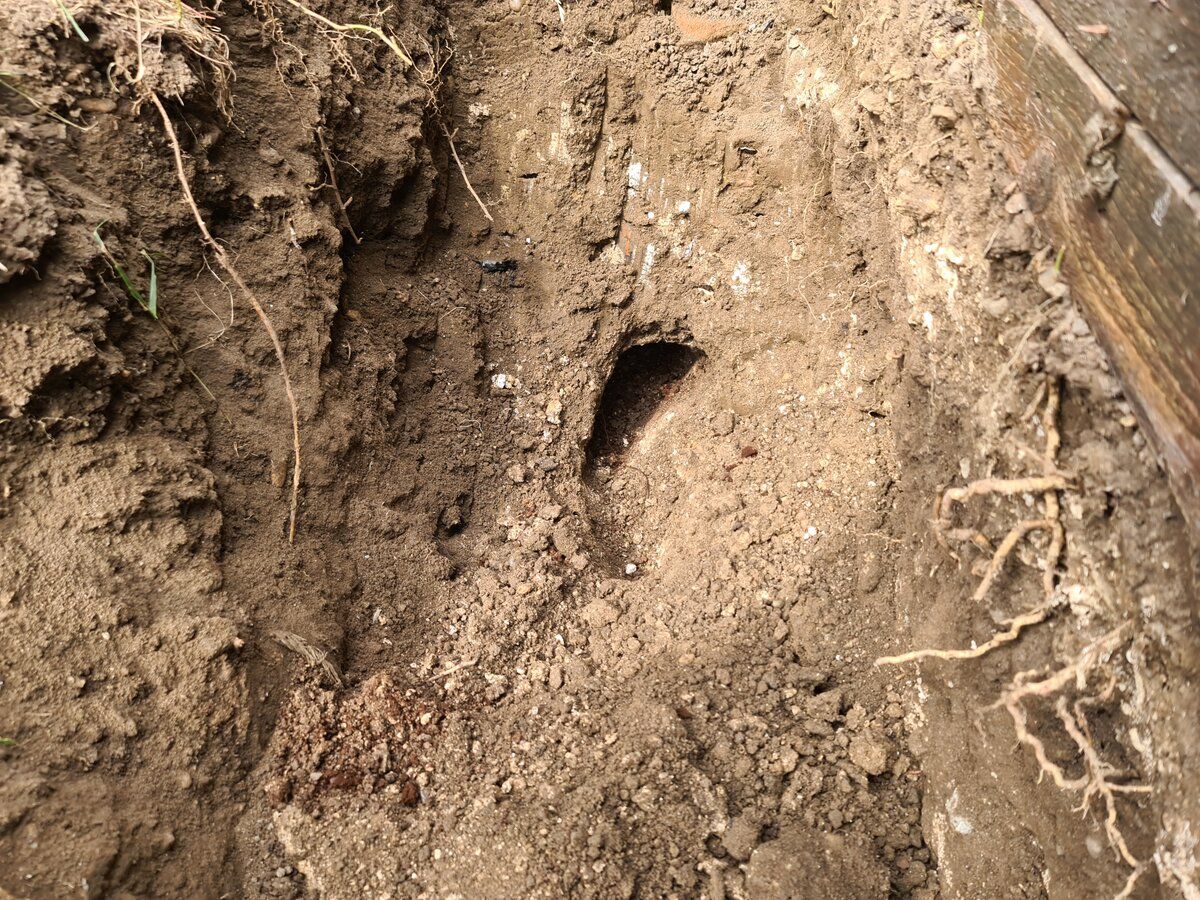 Closer inspection found a decayed bit of timber heartwood in the bottom and lots of rotten timber around it, and a flash photo in the hole seems to show its a cavity rather than a tunnel... Presumably some builders waste buried. Hopefully not too many more cavities down there as I want a decent base for my wall 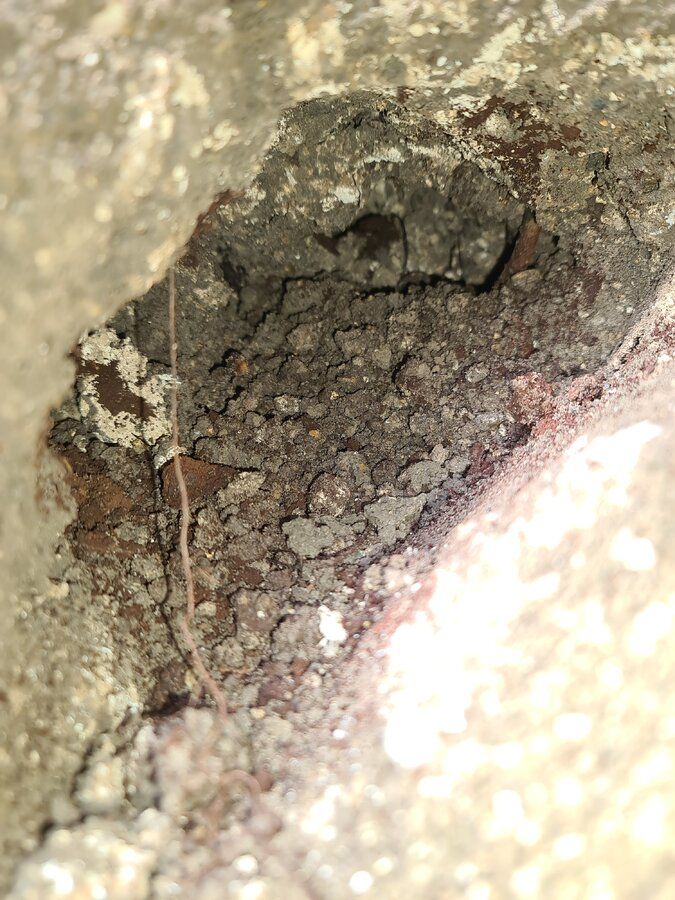 Anyway, I finished my day's digging with only a few square meters left to go down the side. The driveway will finish between the meter cupboards and the aircon unit - nearly there now 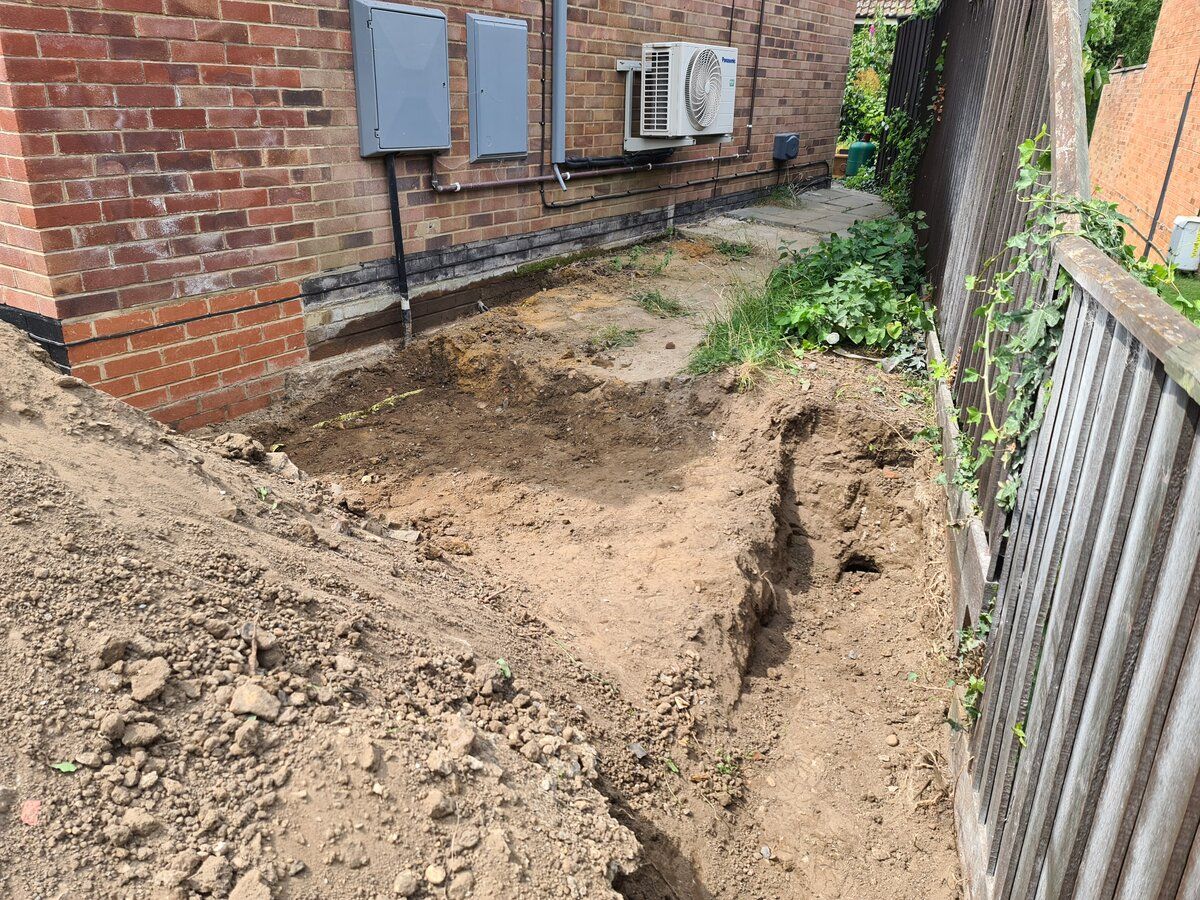