Primary or Secondary a on a dual carriageway (left lane)

I did my cycling proficiency. But they told me to ride in the gutter.

400bhp said:
I did my cycling proficiency. But they told me to ride in the gutter.
Click to expand...

Aye, you're out of date, need re-training

City/Town Centre DC's, primary. Out of town DC's, secondary, unless my speed is close to that of other traffic in which case its back to primary. Less chance of not being seen.

Aware you said to ignore the roundabout, but to give an indication of the roads used locally, starting from home.
I come out onto single carriage roads, cars on one side. Two miles on I'm on a road thats wide enough for three lanes. Then onto a marked lane dual carriage way, roundabout(lanes marked) onto an elevated section(175 foot drop), marked lanes near the second of two roundabouts. Remaining on the dual carriageway that a 1/4 mile on becomes a single lane on the uphill side. Narrows further then its downhill, two lanes coming up.
On the way down, its easy to match traffic speed. Two marked lanes, 100 metres before a set of lights and onto a three lane section.
Its a pattern that repeats itself many times.

I won't ride in the gutter for anyone, so it's primary all the time.

On a dual carriageway, a car ought to be passing in lane two, so it makes little difference where you cycle.

Pale Rider said:
I won't ride in the gutter for anyone, so it's primary all the time.

On a dual carriageway, a car ought to be passing in lane two, so it makes little difference where you cycle.

Nice in theory but in practice and from experience thats not always the case. I had to cycle in the past and recently on dual carriage way from Plumstead to woolwhich southeast london. Yep there is a cycle lane with lots of nice little drop off points for buses.
They will over take anywhere and everywhere if you give them the space. Stick to where you feel safe.

Location
The 'Shire (Lanarkshire!!) & the Netherlands

Tim Hall said:
Primary. Those urban, 30mph, dual carriageways are lovely. The motorist gets plenty of room to overtake.
Click to expand...

I have one of those on my route to work. I am passed on a regular basis by cars/vans/lorries etc doing in excess of 50mph.

As for the OPs original question - primary

400bhp said:
I was wondering where everyone else would position themselves in this example.
Click to expand...

Hard to say without actully being there, but just looking at the pic, which shows a nice wide road not crumbling at the edges, I'd opt for tertiary 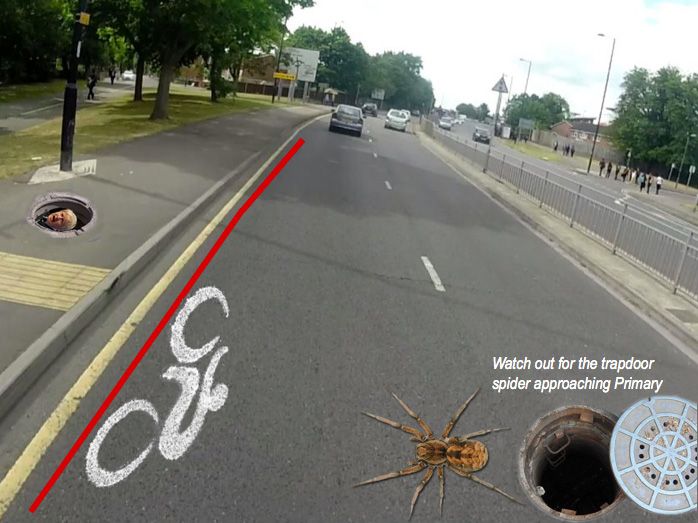 400bhp said:
Just ride your bike. All this talk of primary and secondary is so pedantic and dull. A strong position is all that is called for dependant on traffic flow.
Click to expand...

Maybe a little harsh – it's understandable why the subject comes up – but it I don't usually think in terms of primary or secondary either; I also just ride, often in "a strong position", often not. Mostly I go wherever it's legal and nothing is in the way. Have never been harmed by these habits, knock wood, though I did once come off and knock myself unconscious after tipping into a pothole on an empty road in the middle of the night. I believe I was in primary position at the time.

Reading a story about Bob Breedlove, an ultradistance cyclist who was killed 10 years ago, one finds this: "He always rode within four or five inches of the edge of the road. Never even in the center of his lane." Hundreds of thousands of miles in the "gutter" without a problem. Until there was, and it doesn't look as if had anything to do with his road positioning. Granted he was often on American highways, where you would have to be exceptionally brave to take primary.

My thinking has shifted somewhat. Having done a fair amount of touring over the years, I quite happily positioned myself in what many would consider the cycliste inferior position and very rarely suffered difficulties with other road users. When I did have close calls they either weren't close enough to fluster me or whatever unease I experienced dissipated quickly. Having read (or at least skimmed) Cyclecraft I knew all about "spending quality time in the motorists' 'zone of maximum surveillance.'" My experience was that my cyclecraft was working.

On one local road in particular, a ruler straight mile which frequently invites motorists to redline it before the next speedbump village, the close calls started piling up until I was finally forced to re-evaluate the habits which had stood me in good enough stead. Inspired by my wife, who travelled that way to commute to the train station, and whose bike has been known to cause eyerolling because it's on the leccy, I finally started experimenting with primary on that stretch when oncoming traffic looked to create a pinch point. It worked. Which is what it's all about: using whatever works, when it works best.
Last edited: 18 Jun 2015
You must log in or register to reply here.
Similar threads