I sent my old dura ace crank that failed off to get replaced today so I stuck an older Ultegra crank in temporarily. The Ultegra is a 10sp 50/34 and the Dura Ace was an 11sp 52/34. The internal chain width is supposed to be the same regardless of speed and its only supposed to be the external width of the 11sp chain that's different. The front mech probably needs adjusted but its running quite smooth and I stay in the big ring 99.9% of the time round here, so for a temporary bodge its hopefully ok.

Typically, I wore out my pedals over Christmas too so there a new set of them fitted. I hope the tension adjusters are set fairly neutral

I will probably loosen the left one (the foot I unclip 1st) after tea just to be safe.

She is built up. The rear mech was easy enough to index but the front mech was totally out of line and high/low limits were completely off. Had to faff round for a few hours to get it set up nicely with no grating. Just needs mudguards and pedals and then I can set up the position.

A bit of drivetrain swapping today.

The cheap SRAM Apex chainset I won on Ebay turned up on Thusday and it was in really good condition with hardly any wear on the chainrings, so the high mileage unit (also SRAM) on the Van Nicholas commuter was removed along with the bottom bracket. A new BB and the new chainset were fitted, along with some new rear brake pads and jockey wheels for the rear derailleur.

The chainrings were then removed from the old crankarm and put aside for future spares use. The FSA chainset & BB were then removed from the Giant flatbar and the 44T single ring from this was transplanted onto the old SRAM crankarm and the whole unit fitted to the Giant along with the old BB. For good measure a new cassette & chain were also added as the old ones were very badly worn.

Nothing major I removed the cores of my gravel wheel stems, inserted 60ml of sealant into each, replaced the cores and reinflated. Sometimes the road bike sealant top up is so clean and easy but other times it's a right mess.

Progress update:
Mudguards on,
700x32 gravel tyres on,
Lights and accessories fitted,
Temporary pedals put on for shake down,
Position set up.

Just waiting for my look keo pedals and some new shoes to arrive. 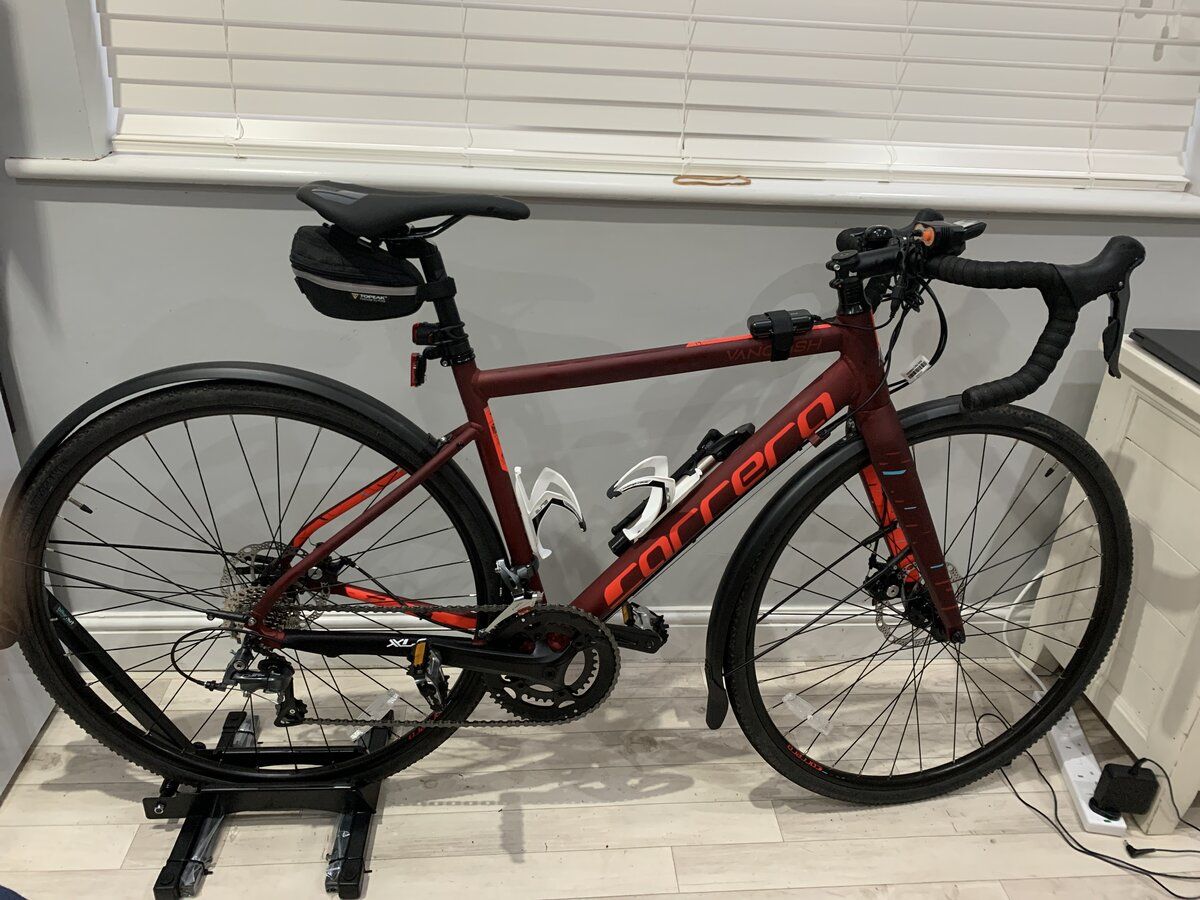 I spent some time today dealing with an unexpected minor domestic emergency, the end of the set of vertical blinds in the bay window had been dragging on the window sill, it looked like a screw had worked loose, I got my step ladder out and had a look, it turned out the screws had been put in with no raw plugs, the holes had enlarged and after a dozen years use the whole thing was hanging on to the ceiling by its fingertips, a search of various bits boxes and tool boxes revealed I hadn't got any suitable raw plugs, I'd got hundreds but not one that would do the job. A quick trip to the local pound shop to get suitable ones and I was able to get the job started, at which point it all came crashing down, so once I got it all sorted out I had to put it up from scratch, job done now and its all back up, now enjoying a.

My filthy Paul Hewitt winter bike cleaned and lubed and new mudflaps from Raw fitted to try a limit splatter to both drivetrain and riders behind.
https://rawmudflap.uk/product/3stripe-mudflap/ 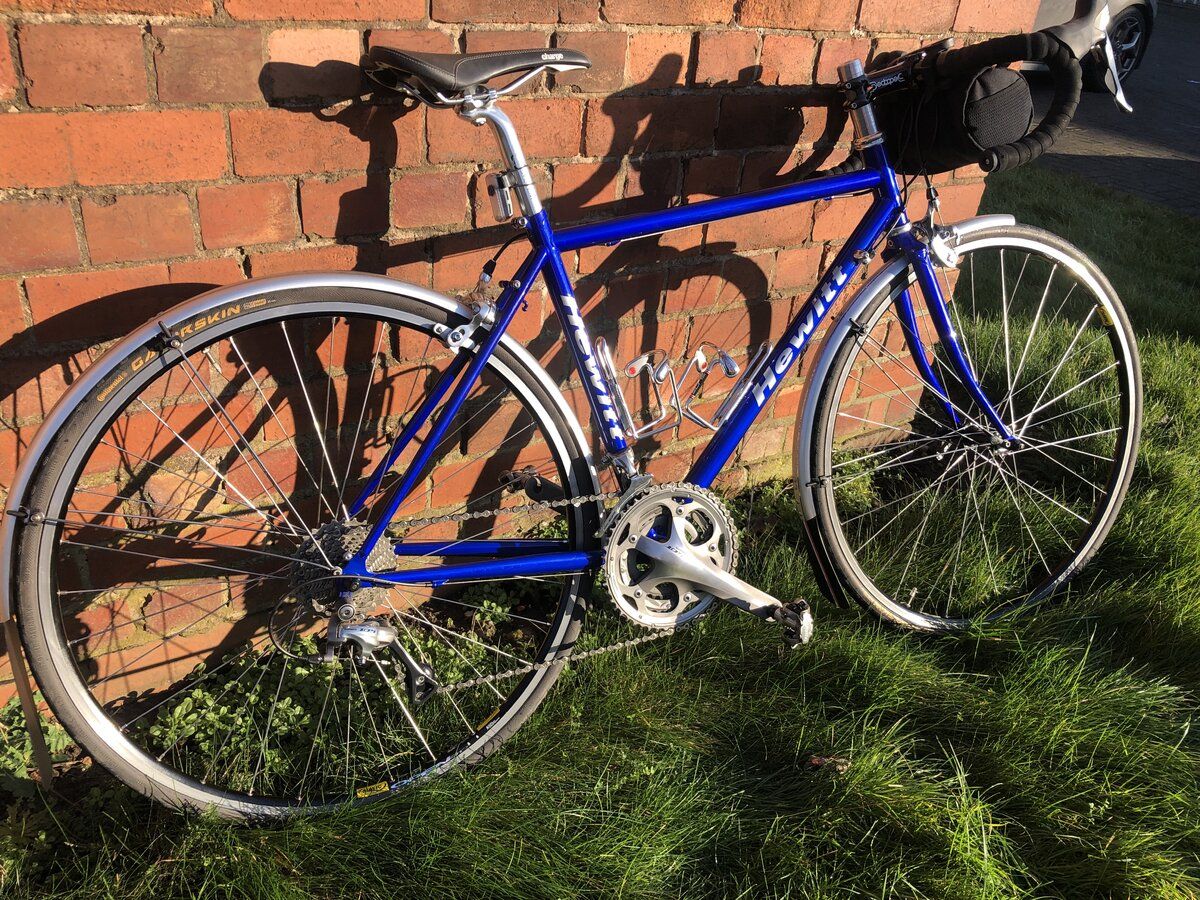 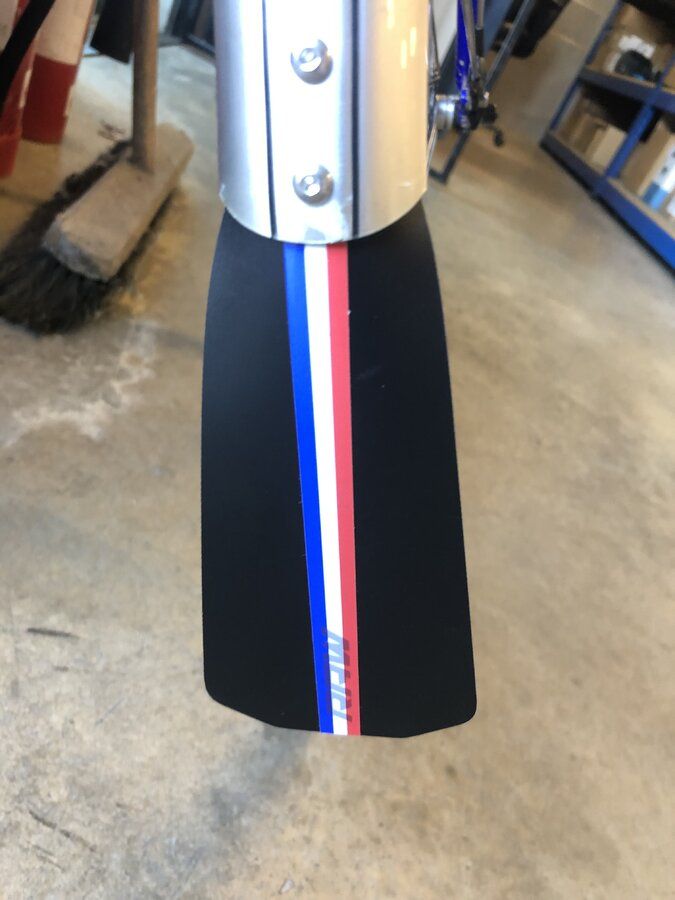 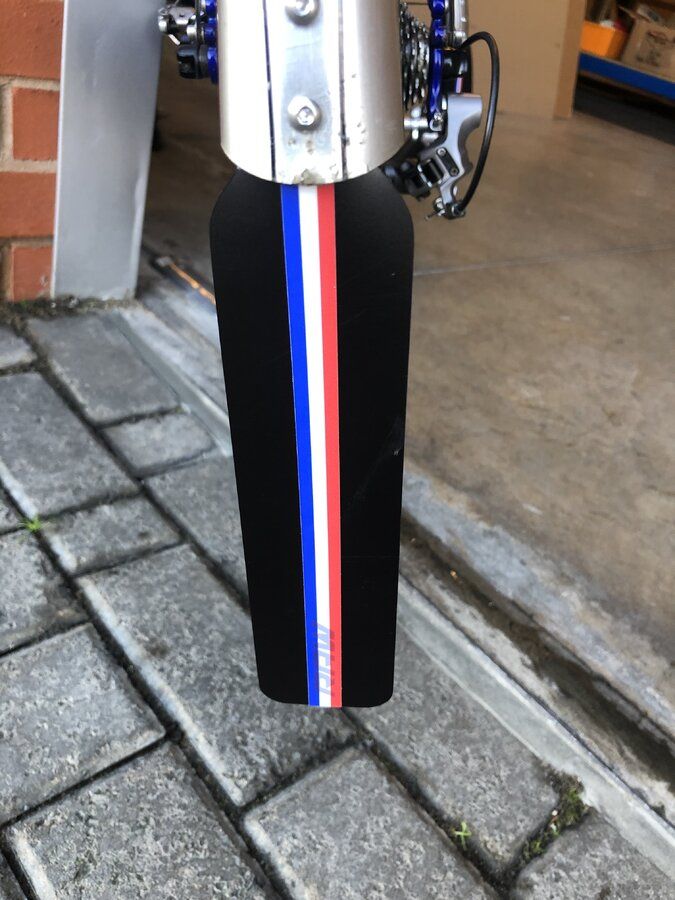 Some fettling and finishing to the Rourke this afternoon. New brake cables inner and outer, a bottle cage from the spares box, new Tortec mudguards with added mudflaps from RAW and finally some new bar tape to finish. 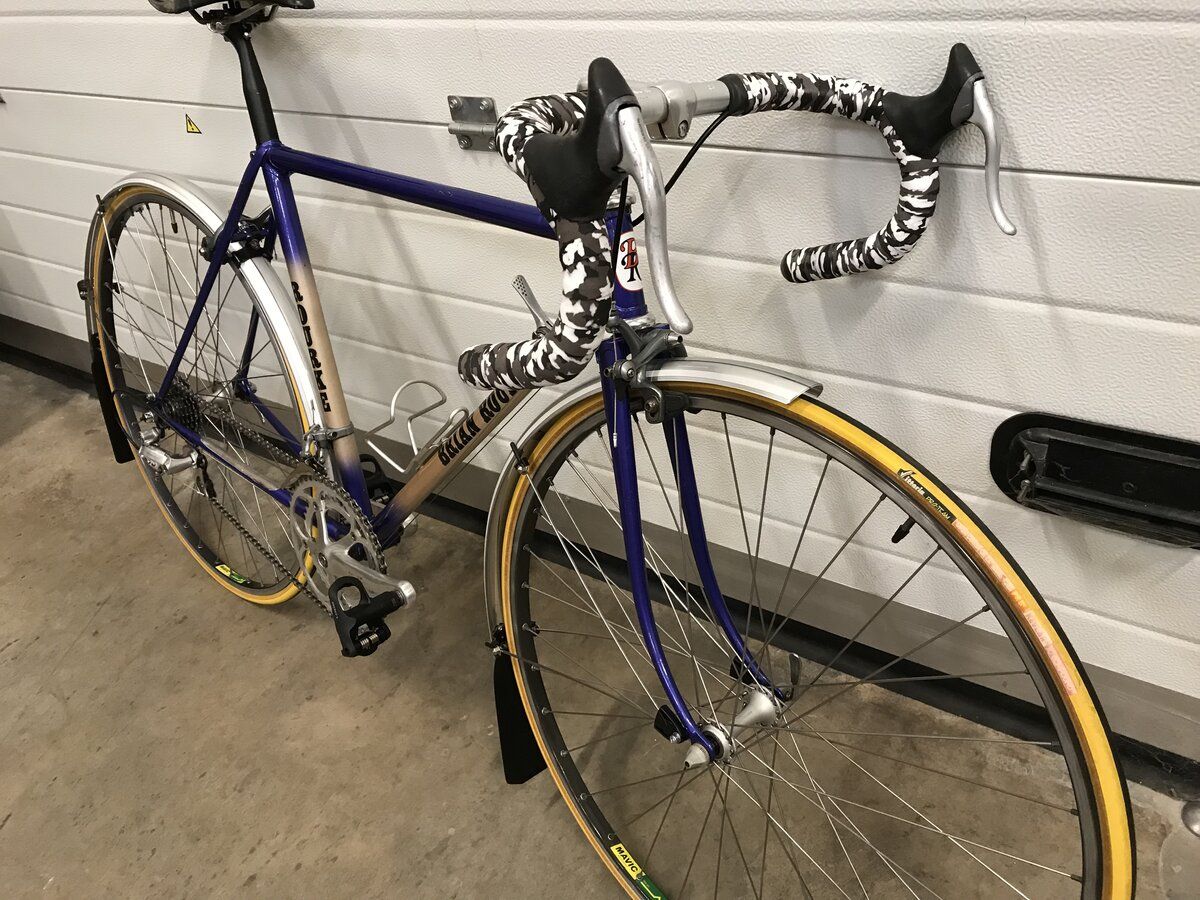 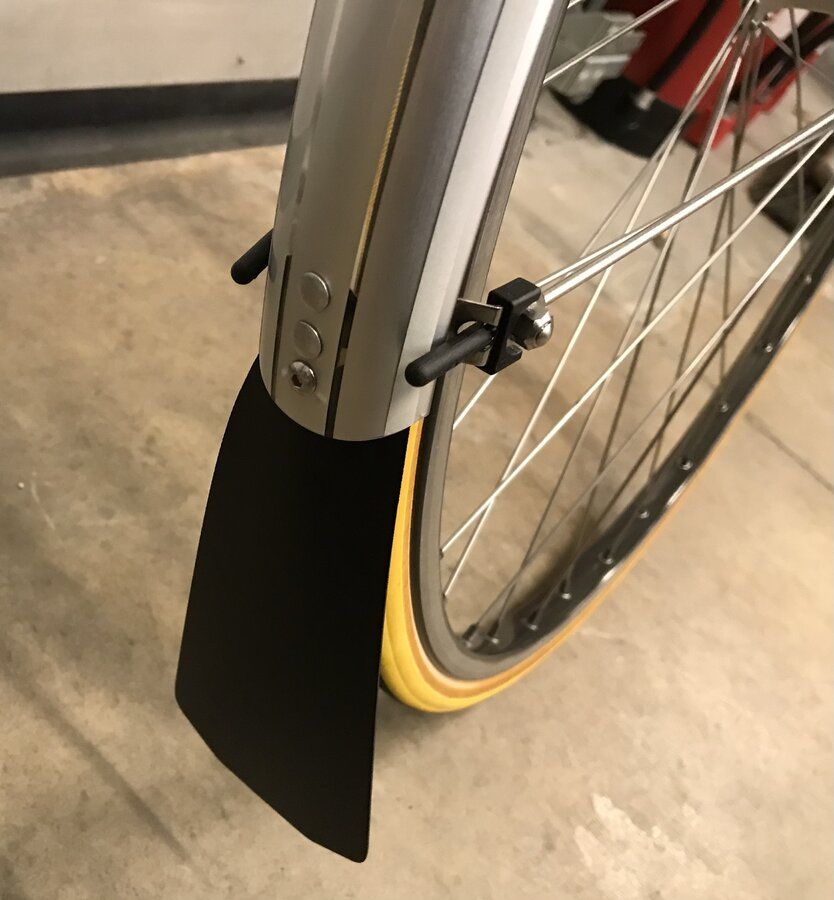 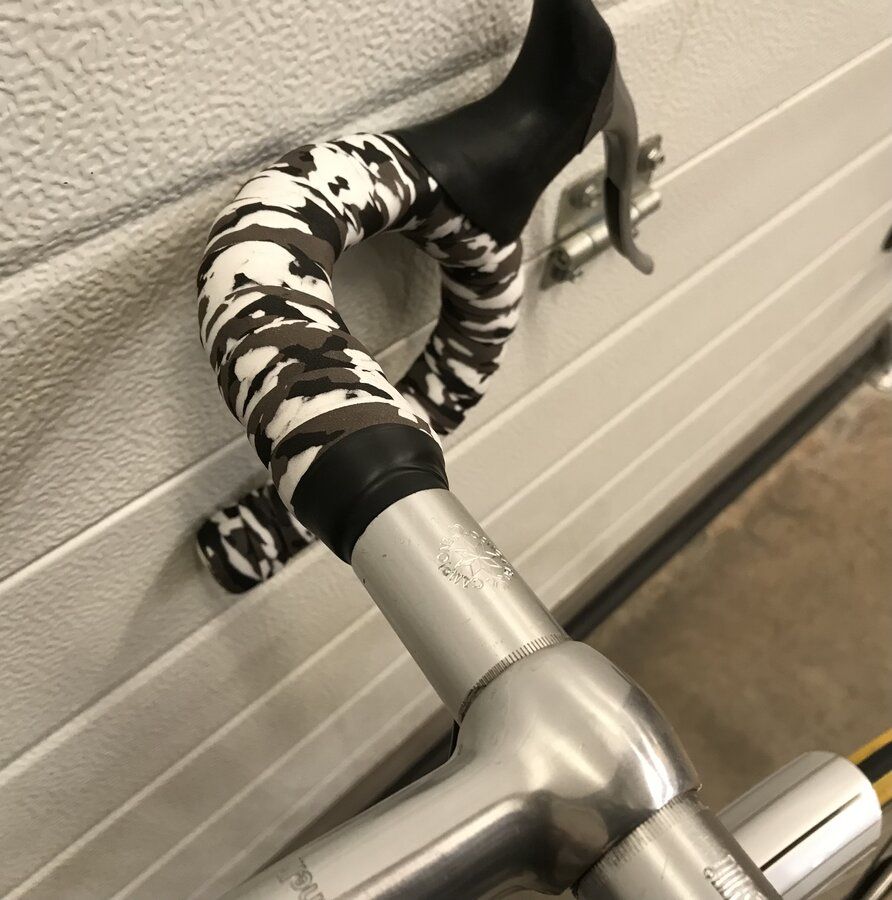 I replaced the element in my fan oven. A bit more hassle than I was expecting. Steak and mushroom pie to celebrate!

Getting a little bit of mudguard rubbing on the Trek, so took a look under the brake bridge and it appeared there was about 3mm space between the bridge and the guard, but because of the mount I couldn't move the mudguard any higher. Ordered a replacement metal mount, and filed down about 3mm from the bracket (same mount I was using already, which was a replacement for the weak plastic mount that was causing a rattle). Used my lunch today to take the mudguard off, replace the bracket with the new modified one and refit.

The guard now sits a little higher on the tyre and there is a much smaller 1mm gap, so hopefully that will reduce the rub (only really happening when starting off from still when the load through the wheel is greater).

Carried out some adjustments to the new to me Galaxy , ie saddle and suspension seat post replaced , adjustable stem re positioned as were the levers , some lube added to the rear sti unit and finally tyres inflated oh and a road test

Two new Carnac helmets from Planet X (another £9.99 offer a couple of days back) which both had a twisted strap

Treated a bit of rust on brake levers and applied some touch up paint. Not back on bike till Sat, so plenty of time for it to dry.

A bit more fine tuning around the Galaxy tonight .

Managed to get all 4 gears running on my Wayfarer today after some very helpful advice on Facebook.

Really enjoying riding it at the moment.
You must log in or register to reply here.

Re: the "What Have You Fettled Today?" thread

what have you learnt today !

What have you learnt today?

What have you rescued today