13 rider said:
@Noodle Legs is that the delightful Orton on the Hill climb ?
Click to expand...

It is! It’s where I met the Nuneaton lads and today we went down it. Cracking little climb though

Noodle Legs said:
It is! It’s where I met the Nuneaton lads and today we went down it. Cracking little climb though

Down is the best direction

Only 2 of us from our group were free for a ride today and as the route planning was not mine I had no idea what I had let myself in for other than “it’s 40 miles and flat “
I did my usual ride down to Ellesmere to meet up at the usual place before we set off on the bit I did know towards Overton, the road is finally being resurfaced which meant a stretch of lovely smooth tarmac. Turned in Overton to Marchwiel where we took a detour through the industrial estate before getting back onto quieter roads to Marford and Rossett. Carried on through Holt, Farndon, Shocklach and Worthenbury before heading back into Wales to Bangor on Dee, Overton then back into Shropshire to Ellesmere for coffee before heading home. It was a lovely route passing through some very nice Cheshire villages, some great views and managed to include Shropshire, North Wales and Cheshire. It was also longer than 40 miles

Have not posted for a while...need to get back in the habit.
Like others, lovely morning today, but I'm stuck every weekend as have my little 'un, however today I was picking her up at 10 so that gave me an hour or so if I could get myself out of bed...and to my surprise I did!

Only 13 miles but really enjoyed it, the only down point Strava telling me I did exactly the same route 4mph quicker 4 years ago

Even stopped for a photo, thought the yellow was quite striking :-) 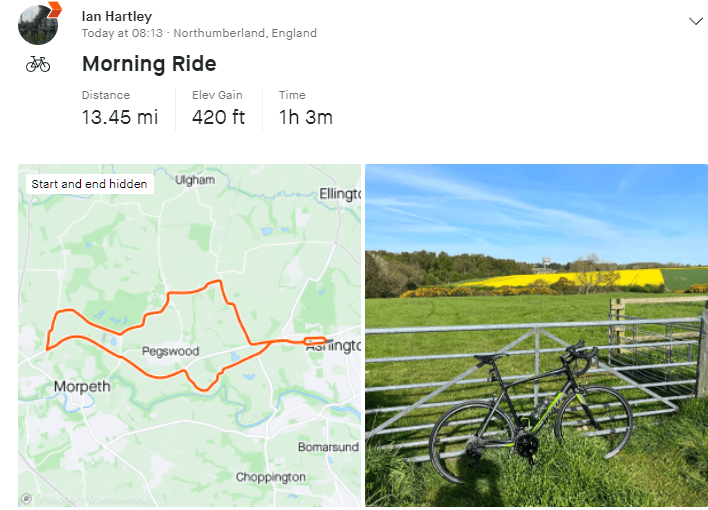 13 rider said:
Down is the best direction

its not to bad , just ruddy sharp and steep !

cyberknight said:
its not to bad , just ruddy sharp and steep !
Click to expand...

You need a decent run up and no wind

Noodle Legs said:
You need a decent run up and no wind

its the false flat before it that grinds you down

cyberknight said:
its the false flat before it that grinds you down
Click to expand...

It wasn't actually today (which was travelling) but the last week has been spent cycling in Calpe.

After collecting the Hire Bike (a rim brake Orbea Avant) the first official day took us a route up Col De Rates. I was 90sec faster than my self in 2009 and there was more to give https://www.relive.cc/view/vWqBgd7dPYv

The second day almost didn't last long when my gear cable snapped at circa 8.5miles in Teulda. After adjusting the limit screws so I was in the 3rd or 4th smallest cog (I forget which one) rather than spending the day alone I decided to press on there was only one short sharp climb anyway, the circa 2 miles long 5.7% [Montgo Climb](https://www.strava.com/segments/6663453), again compared to myself in 2009 I was slightly faster up the main 1mile 6.3% section and with the climb and with the segment finishing just over the crest (where I must have stopped pedalling in 2009) I am 28 sec faster and I was the fastest up the climb on the day https://www.relive.cc/view/vevYo7jQ3J6

I was expecting bad legs on Day 3 but they weren't but when it was suggested that we went to the north of Benidorm and save the relatively bigger climbing for another day I didn't argue. https://www.relive.cc/view/vKv21dzG1oq

Day 4 was torrential but whilst some decided to make it a rest day some other idiots decided to ride. It wasn't actually too bad until we came down the fast main road descent into the north of Calpe, then the heavens really opened. https://www.relive.cc/view/vQvxnWAe5B6

Day 5 in contrast was back to the ideal weather of the day before and we decided to make it a longer one. I miss judged the main climb though and thought it would be 2 or 3 miles longer so I had too much energy left so I used some of it up on the 6miles long undulating climb to Alcala https://www.strava.com/segments/6080552 I managed to be second on the day behind a pro (although his KOM is 6 min faster

) We decided we'd save Cumbre Del Sol until another day. https://www.relive.cc/view/vevYozVNzy6

Peurto De Tudons was next up for Day 6 its a long climb but I was saving my legs for Cumbre del Sol the next day but whilst I was fresh others were not and talks of Cumbre del Sol were a bit subdued. https://www.relive.cc/view/vrqokz5NKyq

So the last day was a bit more subdued and Cumbre del Sol will have to wait. https://www.relive.cc/view/v36AP9MY4ZO

50 miles was the goal but legs felt good so ended up doing 60, potentially could have done more but I'm at work tonight.

Didn't take many pics today and have already posted the lighthouse ones in their respective thread. 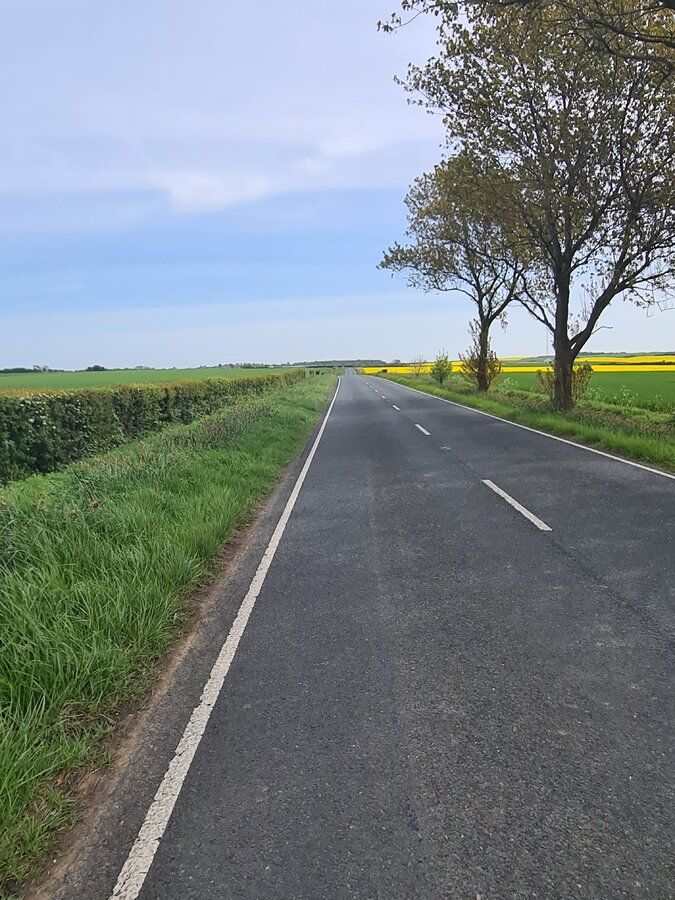 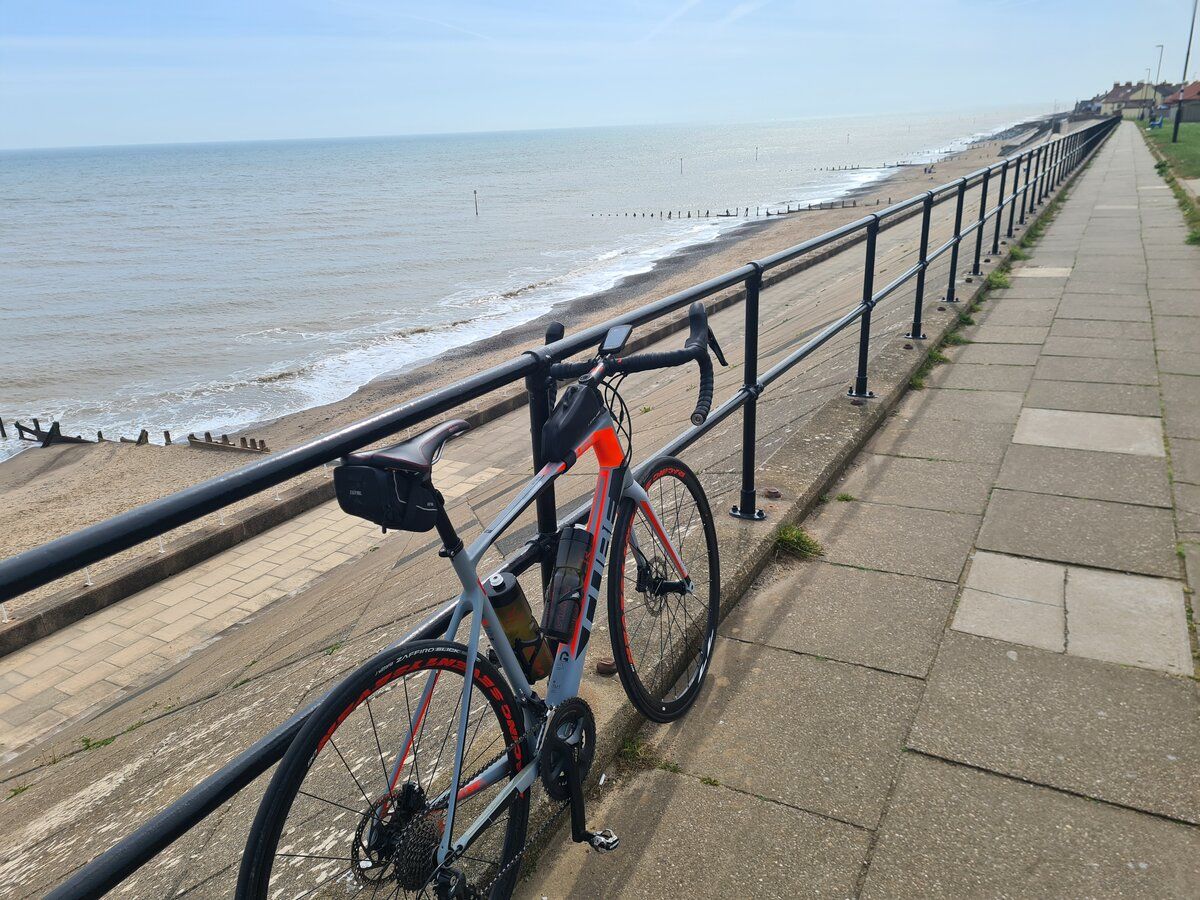 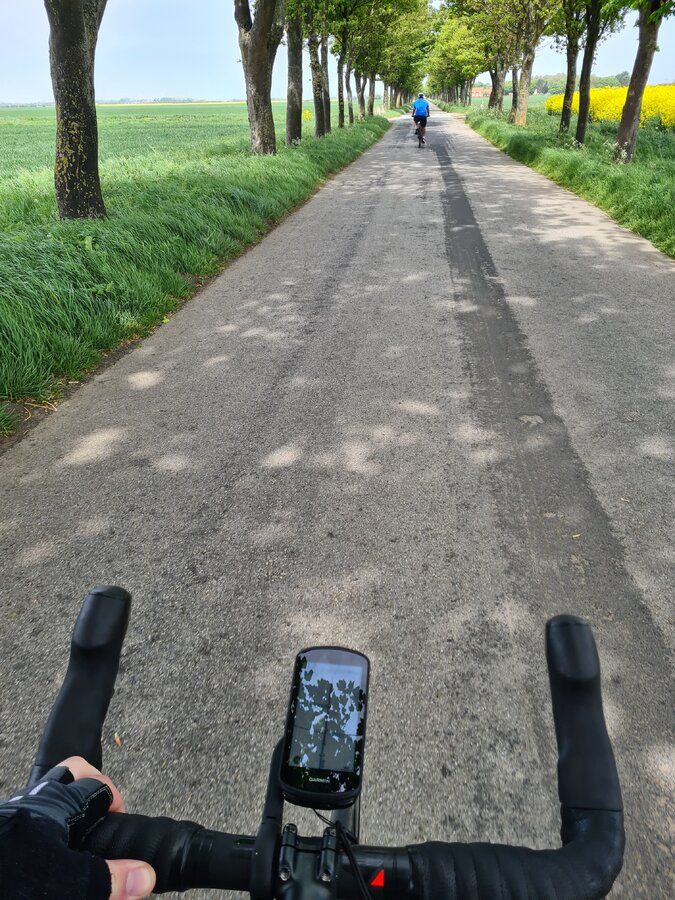 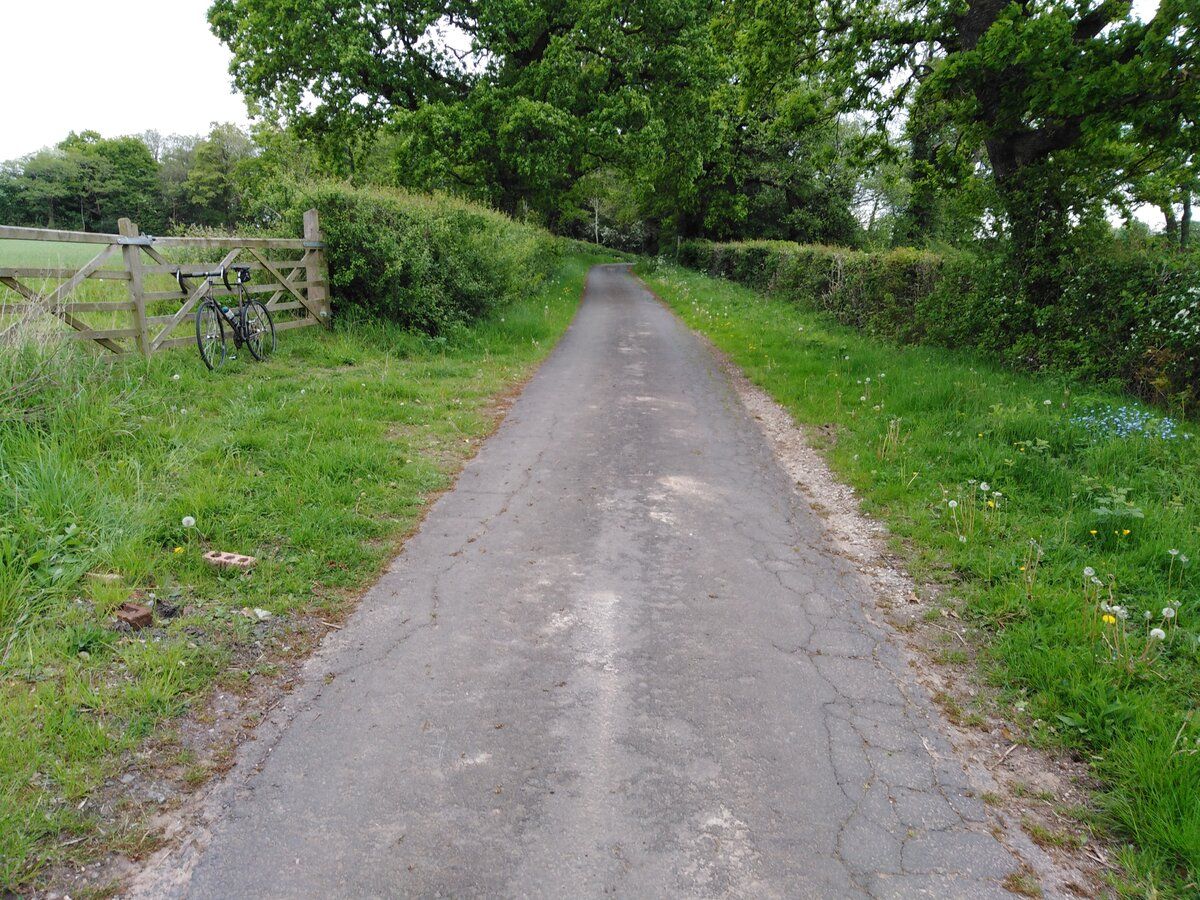 No, it's a fake photo! There aren't any potholes

So yesterday evening some colleagues and I set off for a post work spin on the MTBs around Cannock Chase.

This had been weeks in the planning, my mate Ollie and I never having set foot in the place so very excited to get going and various factors had been an obstacle as to why we never went earlier. But yesterday was finally that day, work finished so it was all systems go! Arriving around 1645 we unloaded the bikes and set them up ready for the ride. 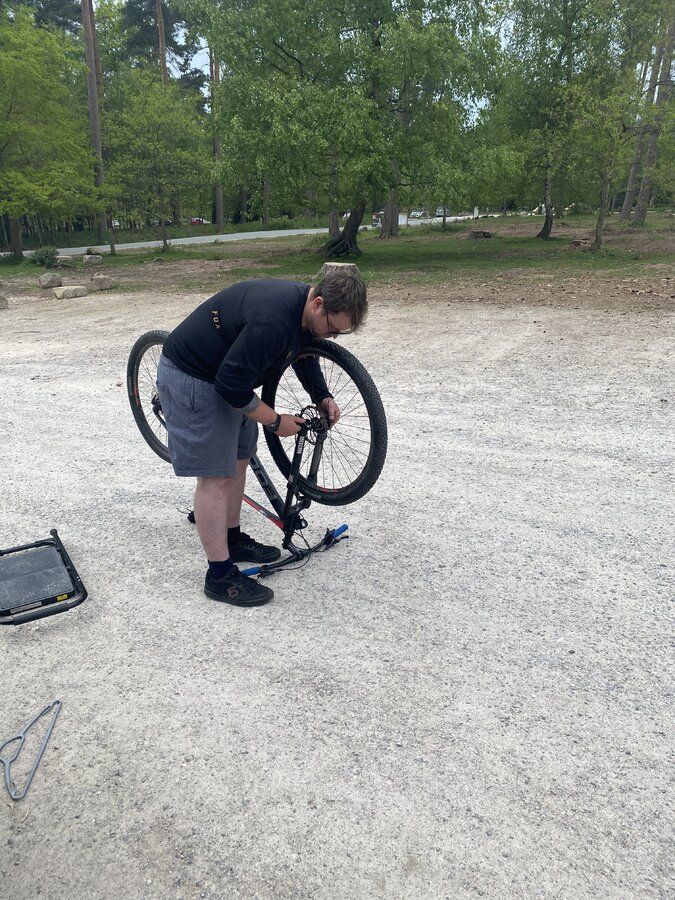 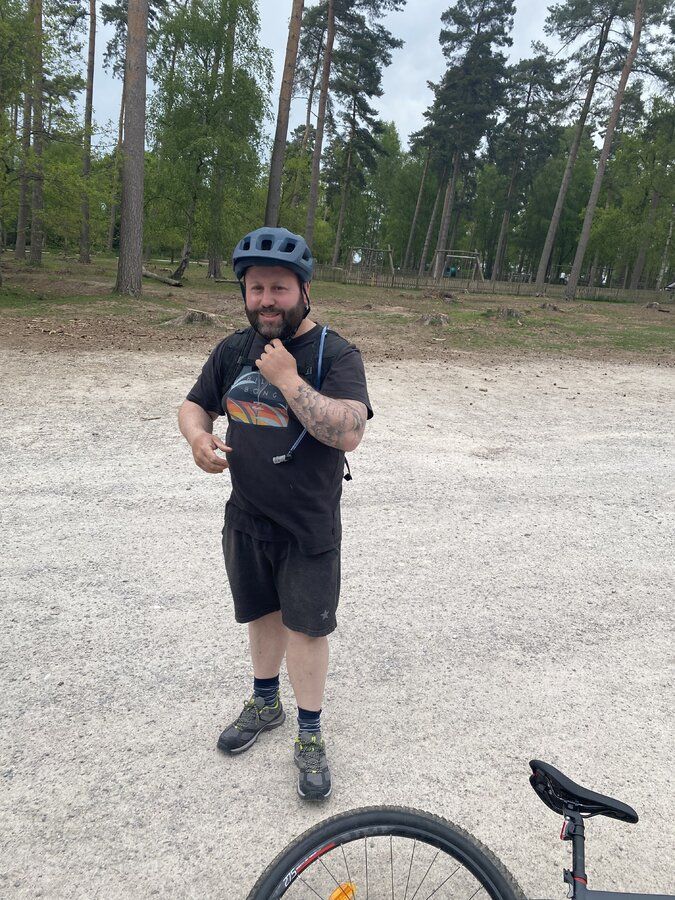 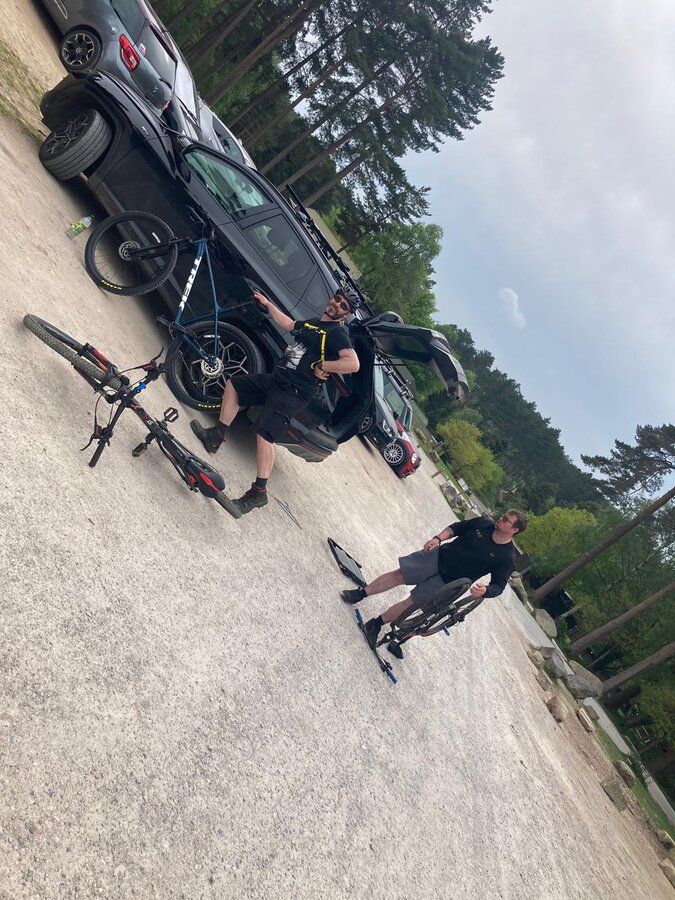 My other mate Will is a regular to these parts and so Ollie and I were happy to tuck in behind and follow his lead. Starting off on the ‘blue’ route, this was a warm up of sorts for the main event ‘red’ route which was soon to follow.

As we began our switch from blue onto red trails I’d managed to get in front of Will, which turned out to be a bit of a curse. You see, I had my GoPro strapped onto my chest which was active and filming and because I was in front at this point I missed the almighty thud and visuals of Will clipping a rock and hitting the deck!

A quick giggle and a dust down later, we pressed on, berms, lumps and bumps aplenty on the first couple of sectors before making a left turn up a long, steep, gravelly hill.

As I dropped into my dinner plate of a gear to spin up I heard Will shout “aaah- chain’s come off, keep going I’ll catch you at the top.”

So I pushed on, Ollie just behind, thankful for reaching what turned out not to be the summit but flat enough for a breather and a drink. 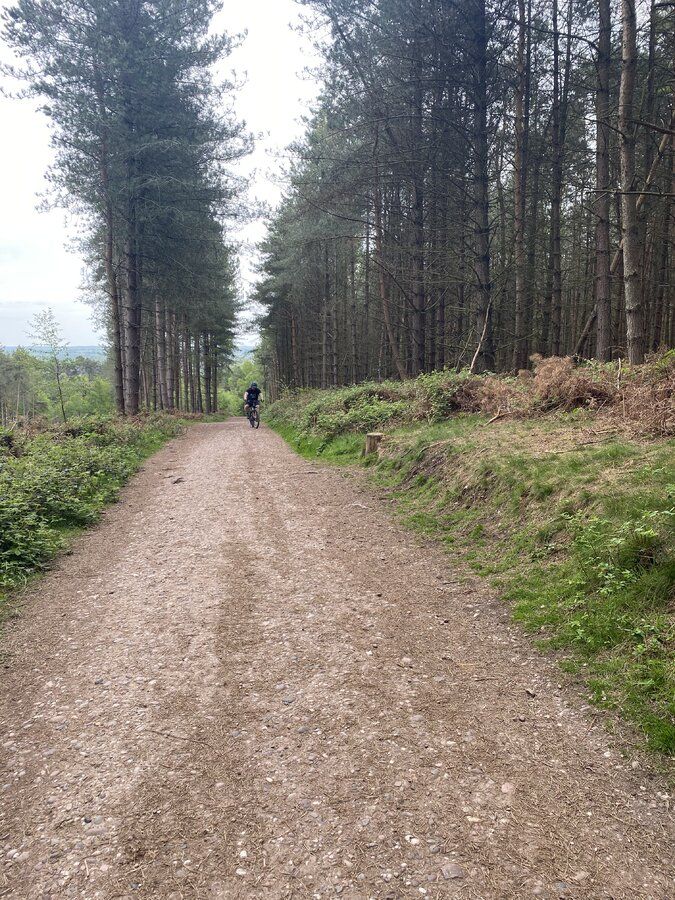 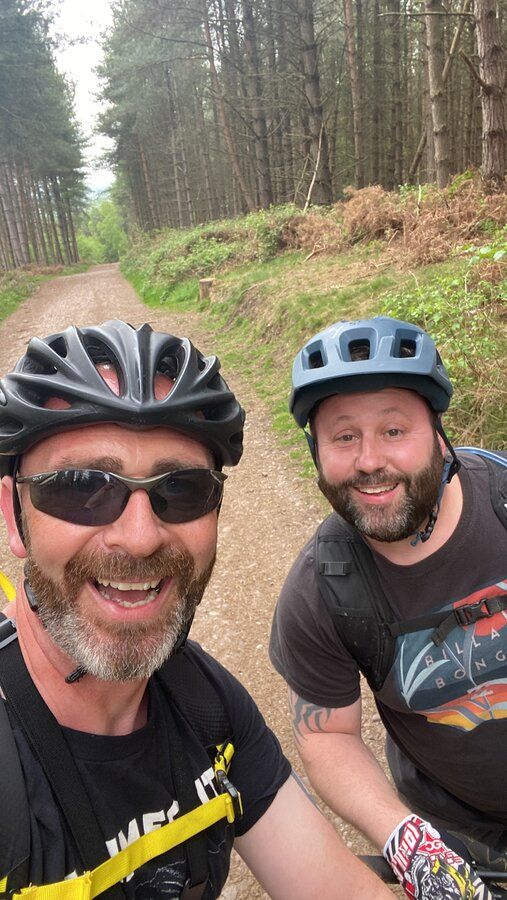 We noticed that Will was nowhere to be seen so we turned back to check in on him and that’s when disaster struck.
As we got back to him it became very obvious that the ride had come to a very abrupt end after just 1.5 miles….. 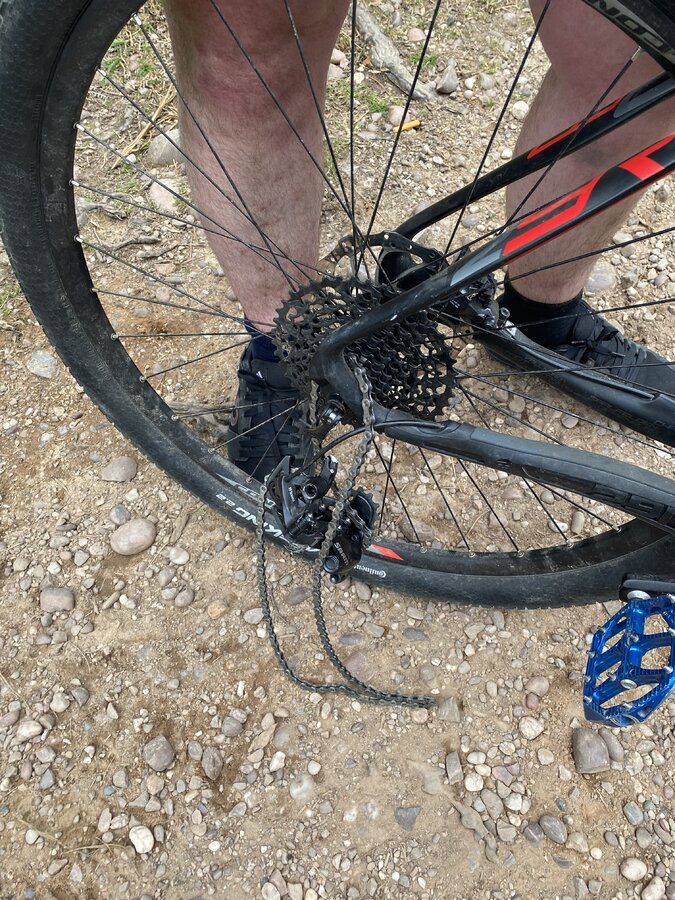 Turns out his hanger had snapped off and so that was the end of that. We made the walk of shame back to the car, too late to take it to the bike shop on site and having done a little over two miles in total. 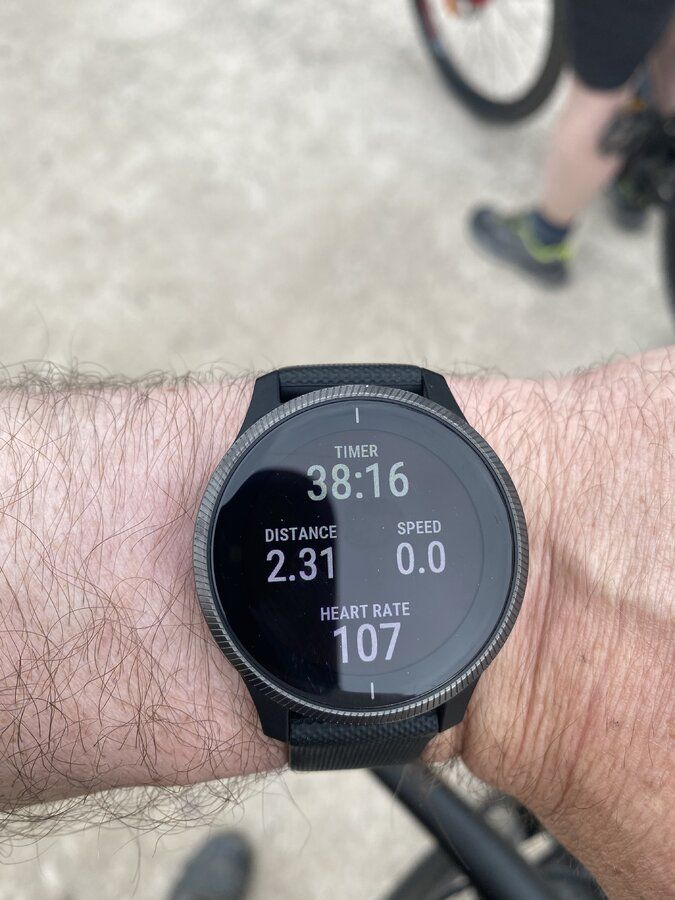 Instead, we sought solace in a nearby pub and made plans for another crack at it at a later stage over a couple of cold Morettis!!

I can't match the distance or rather lack of but i can sympathise having washed out in the forest on Sunday stacking it straight into a tree stump, also breaking my mech hanger (gravel bike) however i was two miles from the end of my ride rather than the start.

itboffin said:
I can't match the distance or rather lack of but i can sympathise having washed out in the forest on Sunday stacking it straight into a tree stump, also breaking my mech hanger (gravel bike) however i was two miles from the end of my ride rather than the start.

Yes on a positive slant, we could’ve been deeper into the forest than we were so at least it was a short walk back (as the crow flies). I’d have also taken it near the end!
You must log in or register to reply here.