Home improvements - time the house had some TLC!

I've not done much to the extension for a while for various reasons, 10" of snow being one of them, but today I have finally made a bit of progress

Our phone line had a fault which required an openreach engineer to come out - he found the problem quite quickly, some knackered old copper cable, and during the course of fixing it we took the opportunity to route the cable in through the new wall as I had intended to do. Once he had left I fitted the cable covers I had purchased, one small job ticked off the list 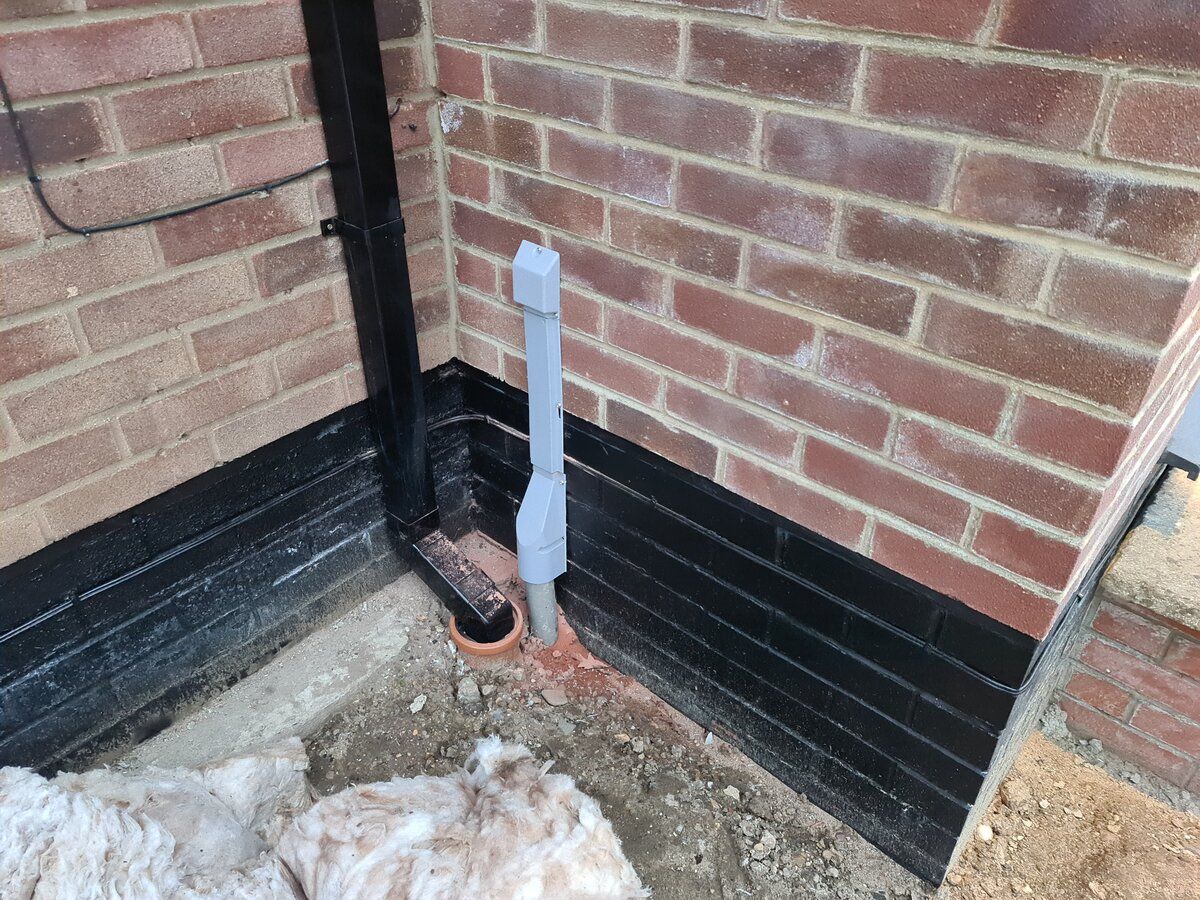 Next job to tick off was the soffit and fascia on the end wall, it was the last bit that needed finishing so I was happy to spend a few hours getting it done... 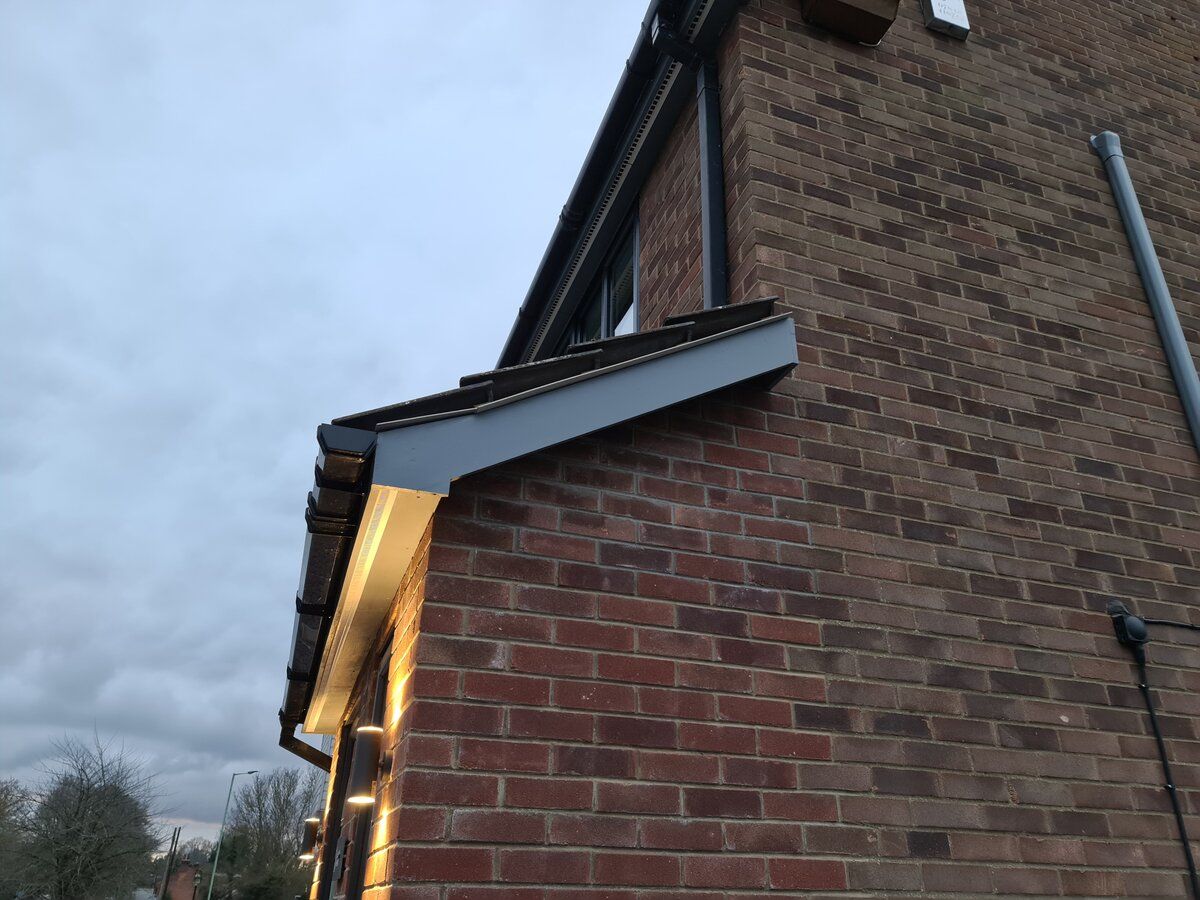 Next time I'm mixing mortar I'll stick some under those end tiles, same on the other end. I need to finish the flashing too but I'm putting that job off as I don't want to climb on the roof - I'm rather hoping my friend can do that bit for me when he's here to knock through

With it getting dark I moved inside and whipped the old door off it's hinges then started removing the frame. This is as far as I got today, tomorrow I'll carry on sawing through the bolts and cutting the mastic out until the frame is free - I had planned to use a bit more brute force and ignorance but a neighbour has asked if they can have the old door for their daughters garage so I've had to change my approach 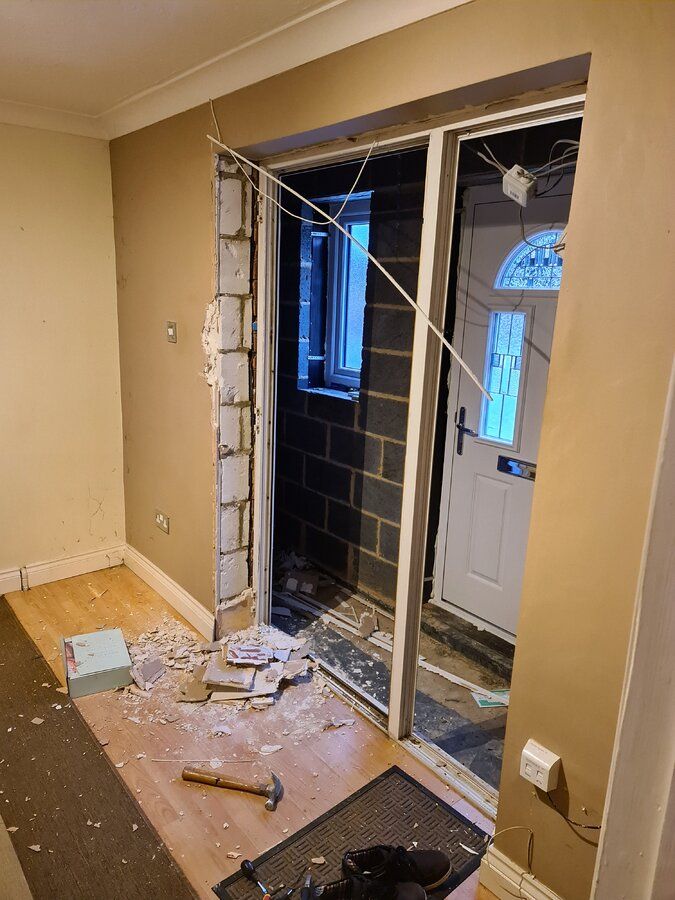 It'll then be a week or so wait for it to be made and delivered, at which point my friend will spend a weekend propping, smashing and installing it for me

So what are you gaining John? Are you squeezing in a downstairs loo?
OP

Gunk said:
So what are you gaining John? Are you squeezing in a downstairs loo?
Click to expand...

We currently have a hall that takes up almost a quarter of the ground floor, and no downstairs loo. This little extension will allow us to partition the corner of that hall off to create a decent size downstairs loo and a small entrance hall. I'll then knock the remainder of the old hallway through, increasing the size of the open plan lounge/diner

I managed to get the door frame out intact today, it was a bit of a wrestle but we got there in the end 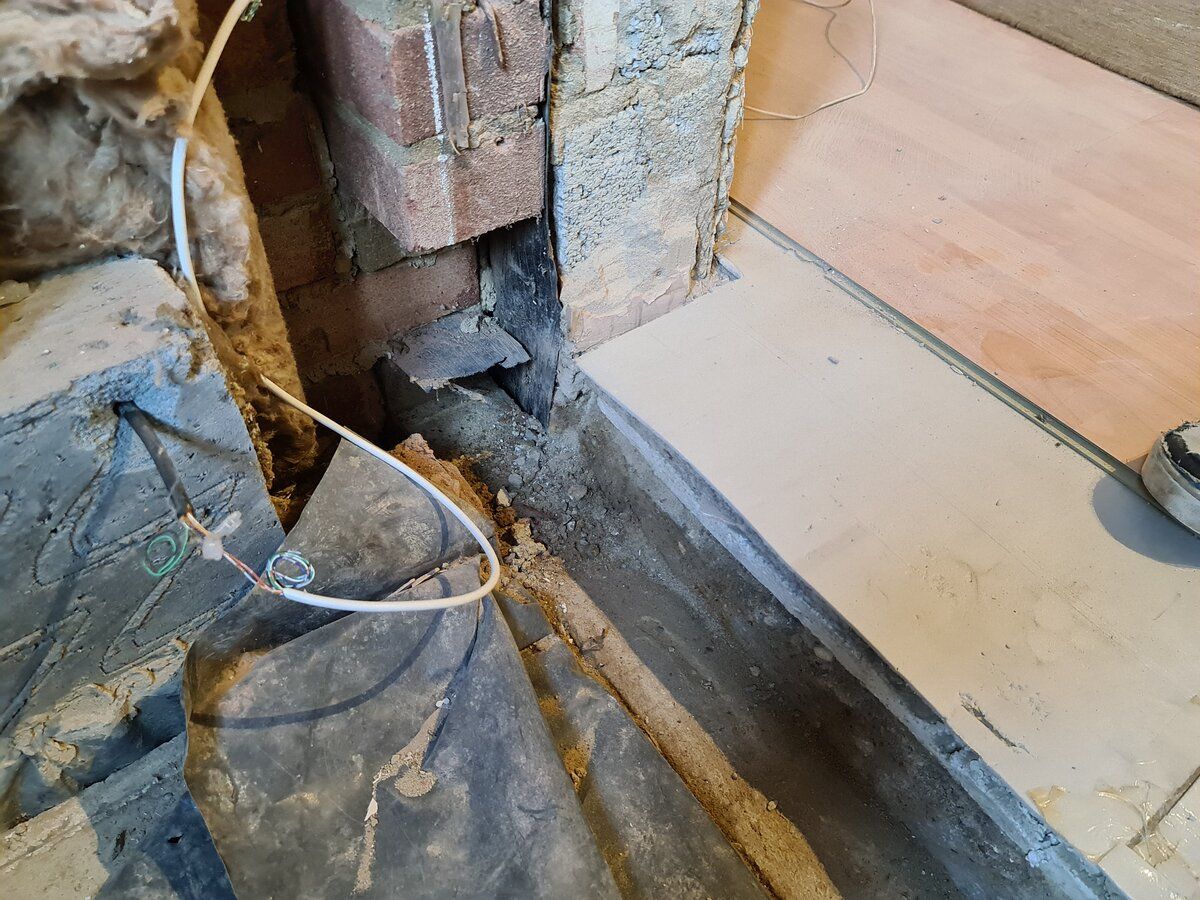 Anyway, once that was out of the way I chopped some ceiling out and exposed the joists and knocked a bit of plaster off in a few places, then cleared away the bulk of the debris. Despite the internal doors all being closed we'll now be dusting the entire house for a few days 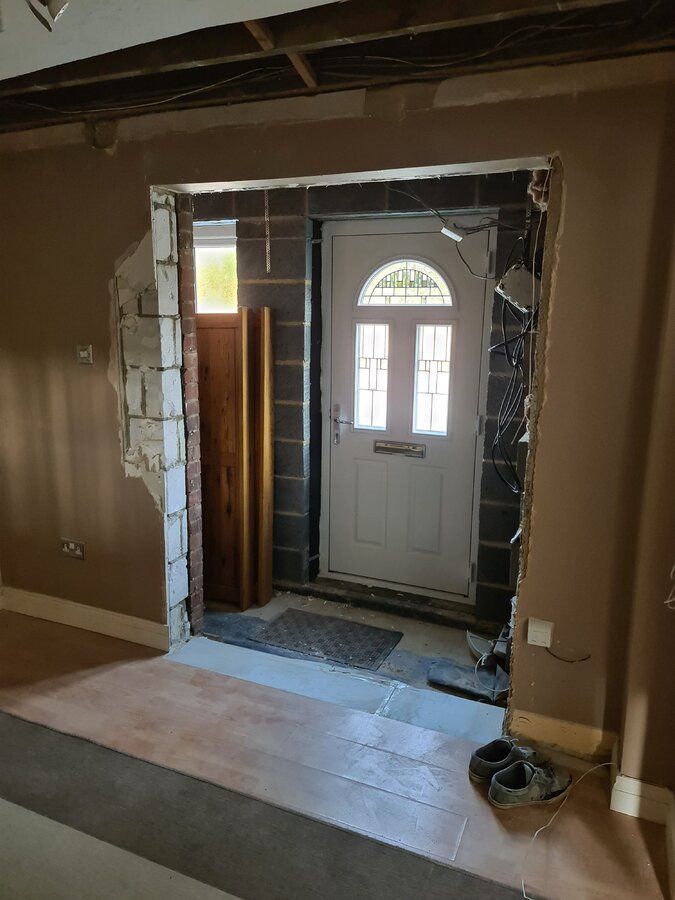 Any work done in the house.....dust arrrgghh.
I've been following this thread for a while and the brickwork is superb for a none brickie, I can't wait to see it finished.

Hicky said:
Any work done in the house.....dust arrrgghh.
I've been following this thread for a while and the brickwork is superb for a none brickie, I can't wait to see it finished.

It's coming together slowly, I've got the structural engineer coming over this evening so that's another step forwards

I've saved a lot by doing the bulk of work myself so didn't make sense to go with the cheap option here.

Pleased with progress, need to save up some pennies to finish the driveway and think about buying some materials to start the internal partitions now

Minor update, hopefully a bigger one in the near future

The steel arrived last week and we're pencilled in to install it and knock through on Monday and Tuesday next week, all being well 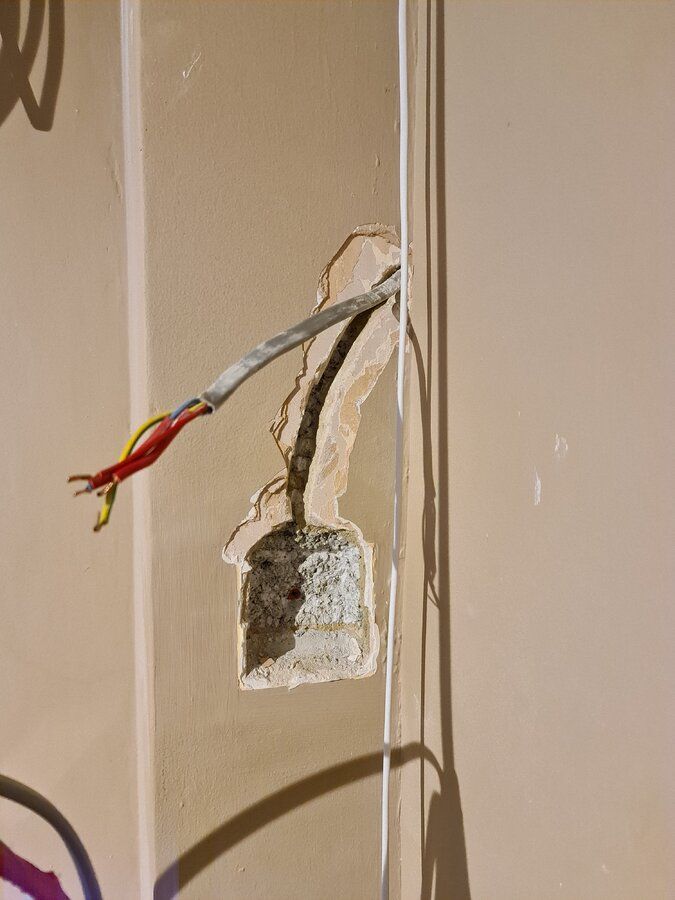 Still, I guess the bonus of running the cable like that is it means you can drill a hole directly above the switch without having to worry about hitting a cable... If only they'd done the same on the other side of the door, where I found this beauty under the top layer of plaster... 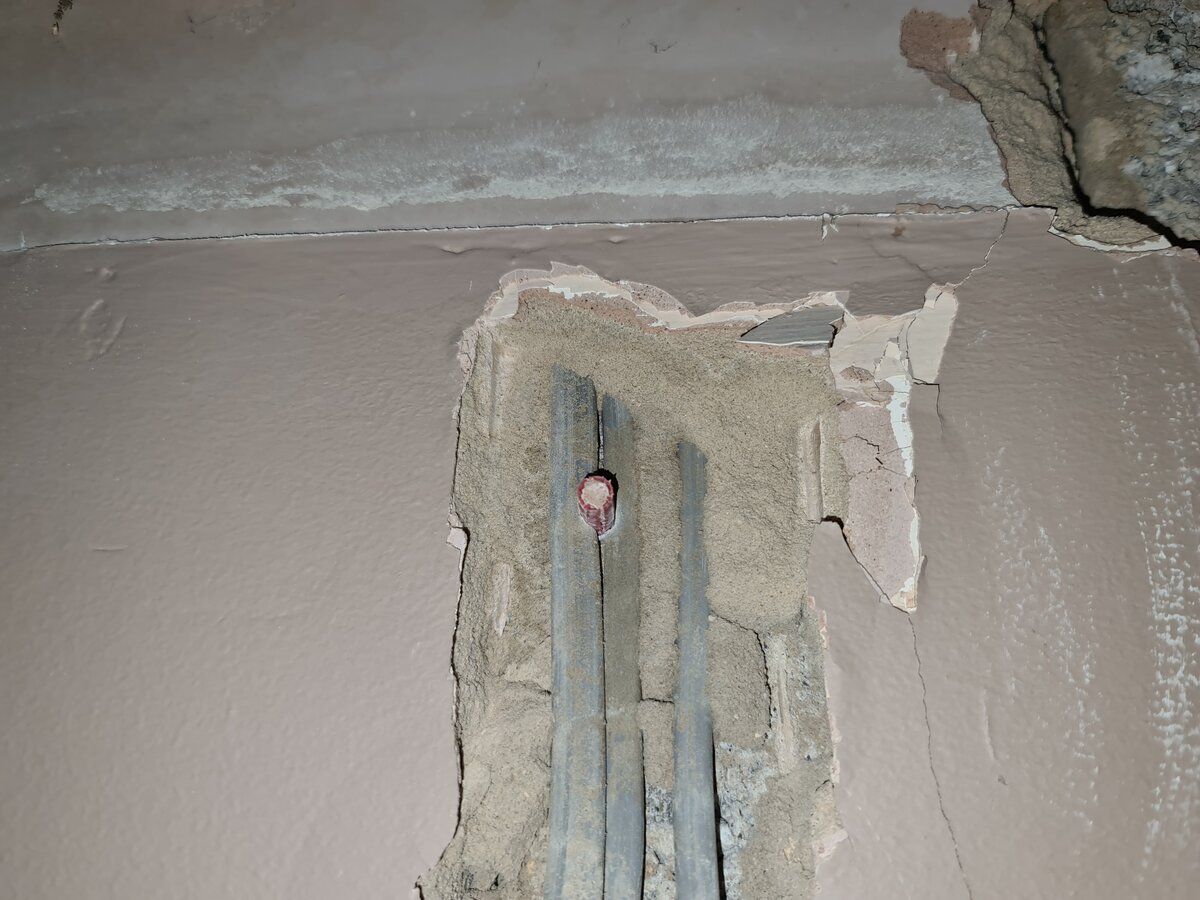 Not quite understanding how the electrics worked at all with a hole drilled through two cables I investigated further to see if it was a glancing blow and had missed the conductors... 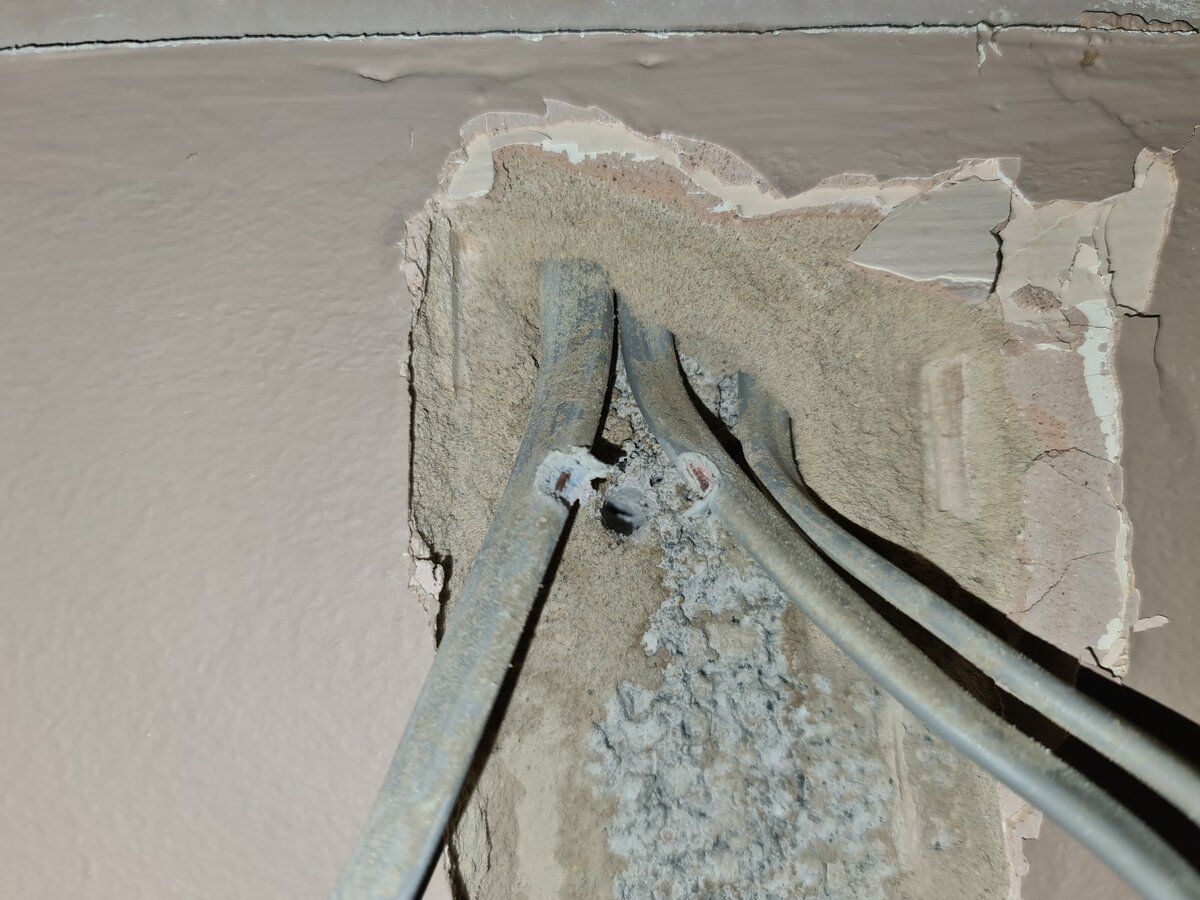 Straight through both copper cores

I traced them back and found that through shear dumb luck these are both switched live conductors and, presumably, both were off when they drilled the hole and plugged it

Unbelievable really... Presumably the same skilled tradesman had added the extra cable to this wall box and pushed the grommet out, damaging the insulation against the sharp metal edge 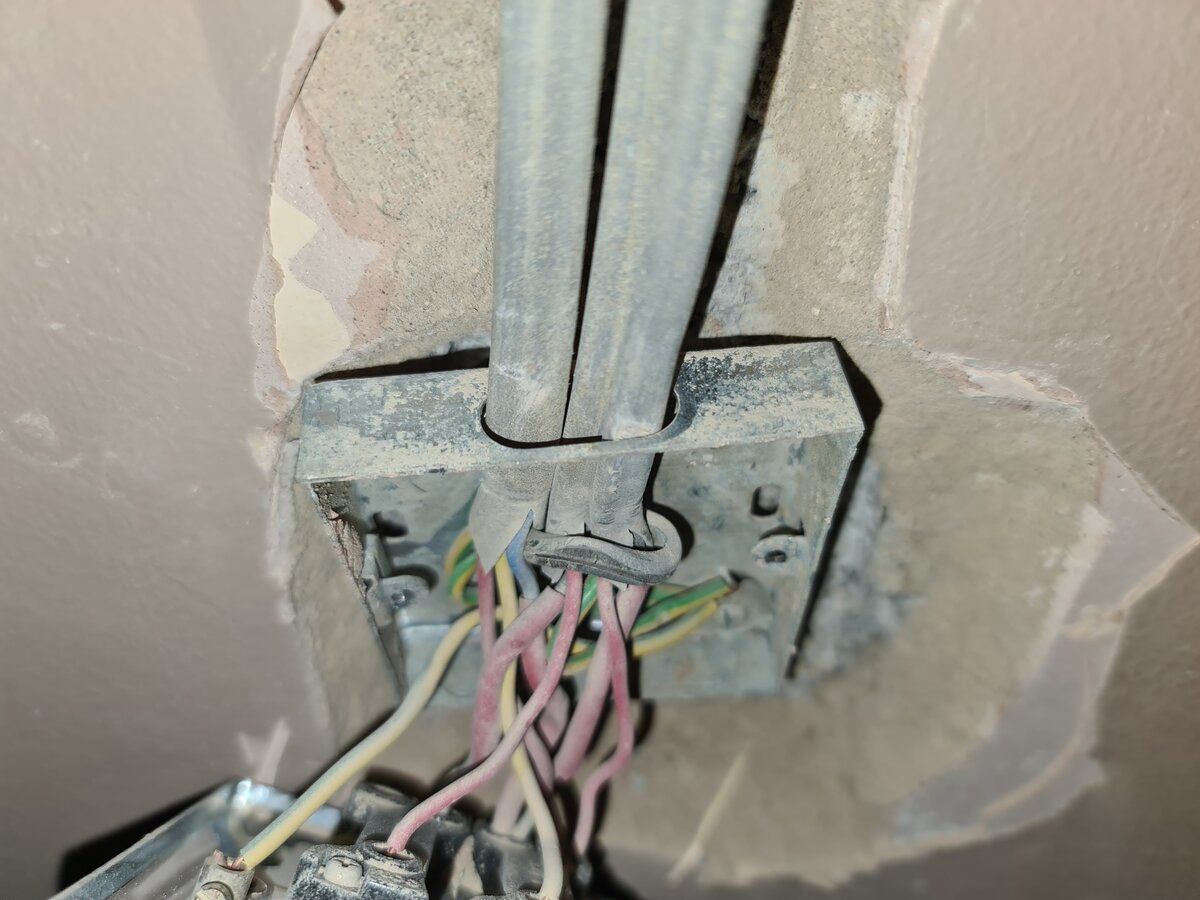 I wonder how much of my house is built like this

Oh well, I've ripped out all the dodgy stuff and made good so it's all working again but with no cables in the way of progress 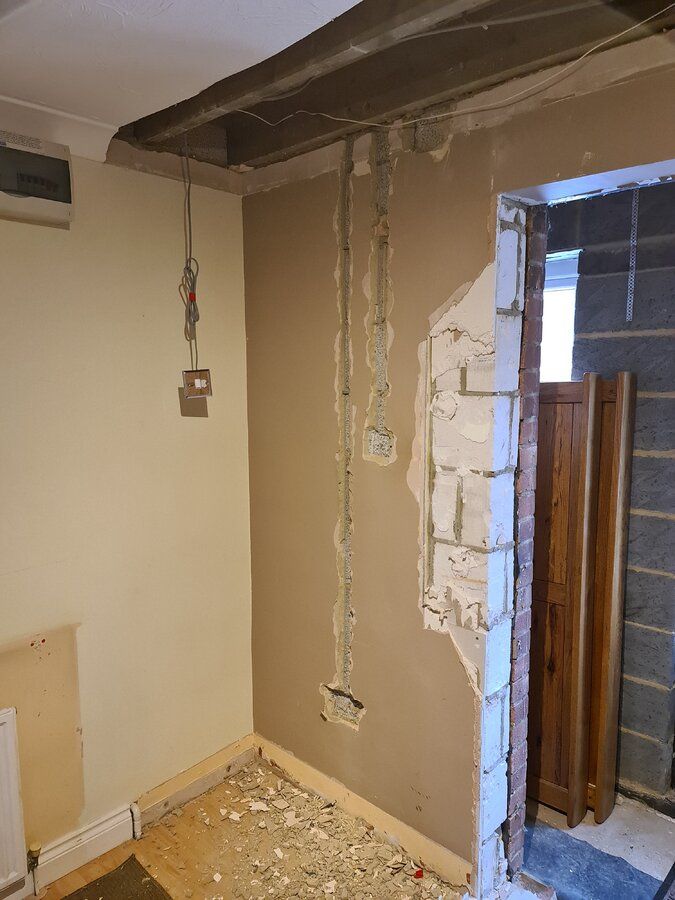 JhnBssll said:
Still, I guess the bonus of running the cable like that is it means you can drill a hole directly above the switch without having to worry about hitting a cable... If only they'd done the same on the other side of the door, where I found this beauty under the top layer of plaster...

Not quite understanding how the electrics worked at all with a hole drilled through two cables I investigated further to see if it was a glancing blow and had missed the conductors...
Click to expand...

Oh dear! Was there a touchable screw associated with that rawl plug then?
OP

irw said:
Oh dear! Was there a touchable screw associated with that rawl plug then?
Click to expand...

Fortunately not, I didn't even know the plug existed as it was buried under the top layer of plaster. Any associated screw had long been removed

I’m sure most of our houses are hiding the odd horror.
OP

A successful day of demolition today

We've just bolted the two beams together so first thing tomorrow we'll lift them in to place and prop them, then install the pad stone on one side and post on the other. The post will need to have concrete cast around its base, then its just a case of waiting for it to go off before the props come back out 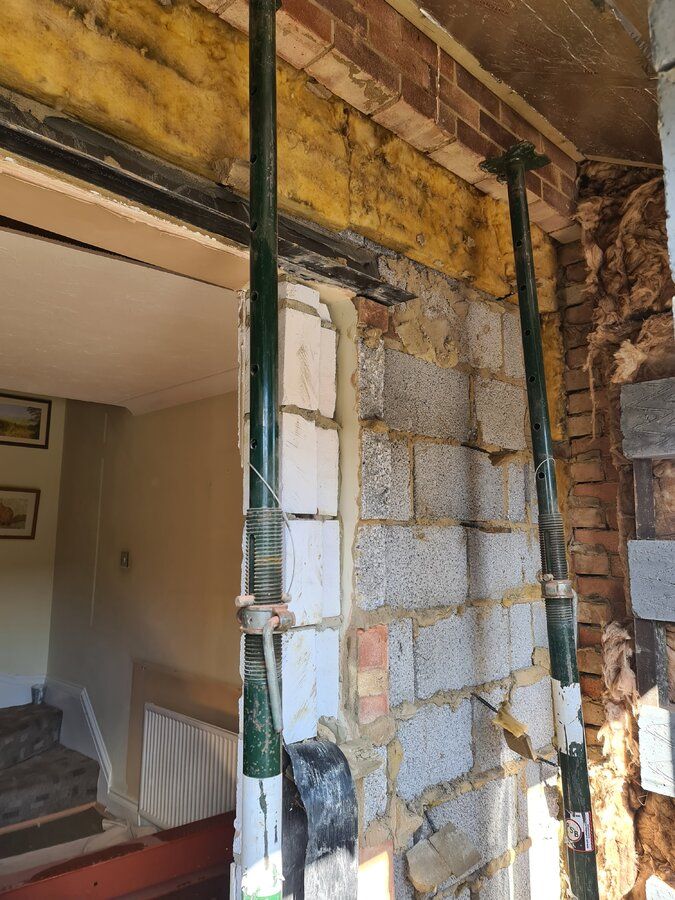 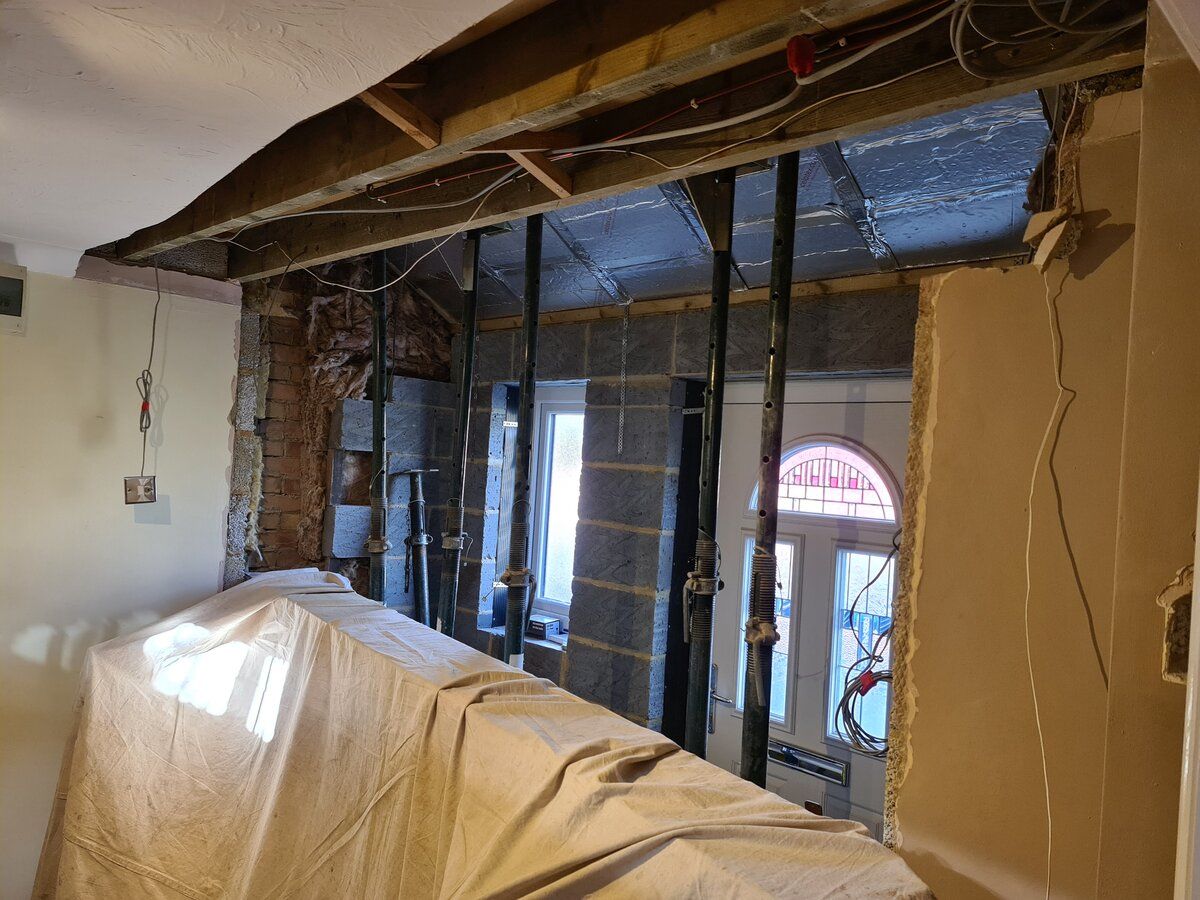 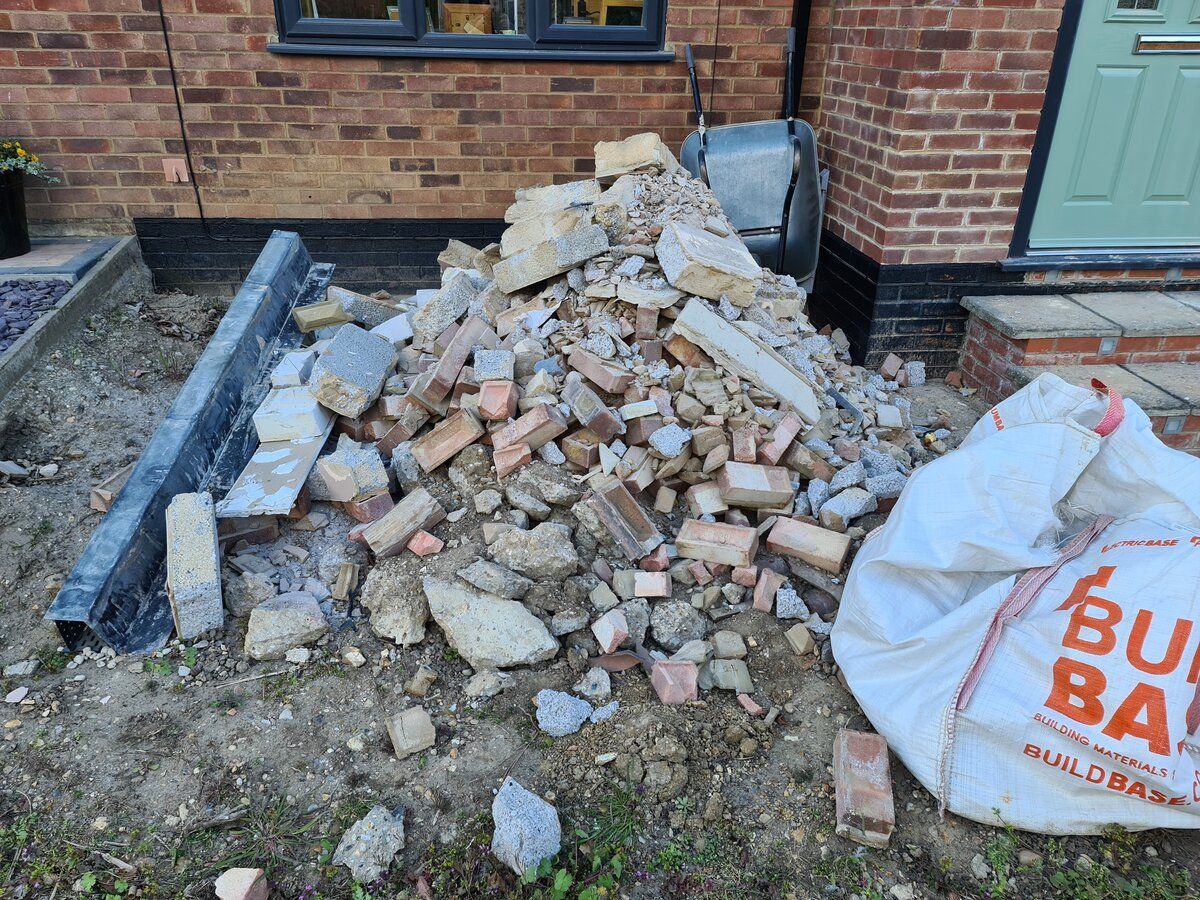 I had my friend over again this morning to finish off installing the steelwork - he's done a cracking job, really pleased with the outcome.

We finished yesterday with the old wall out and the two beams bolted together ready to lift in to place. We started this morning where we left off, by slowly hulking the 140kg of steel up above head height with the use of a couple of trestles and some weetabix

With the beams up flush with the floor joists and the mortar bed above it nicely squished on both leaves of the wall the brick padstone was built up to support it - note the neat brickwork, suggesting rightly that it may not be my handiwork 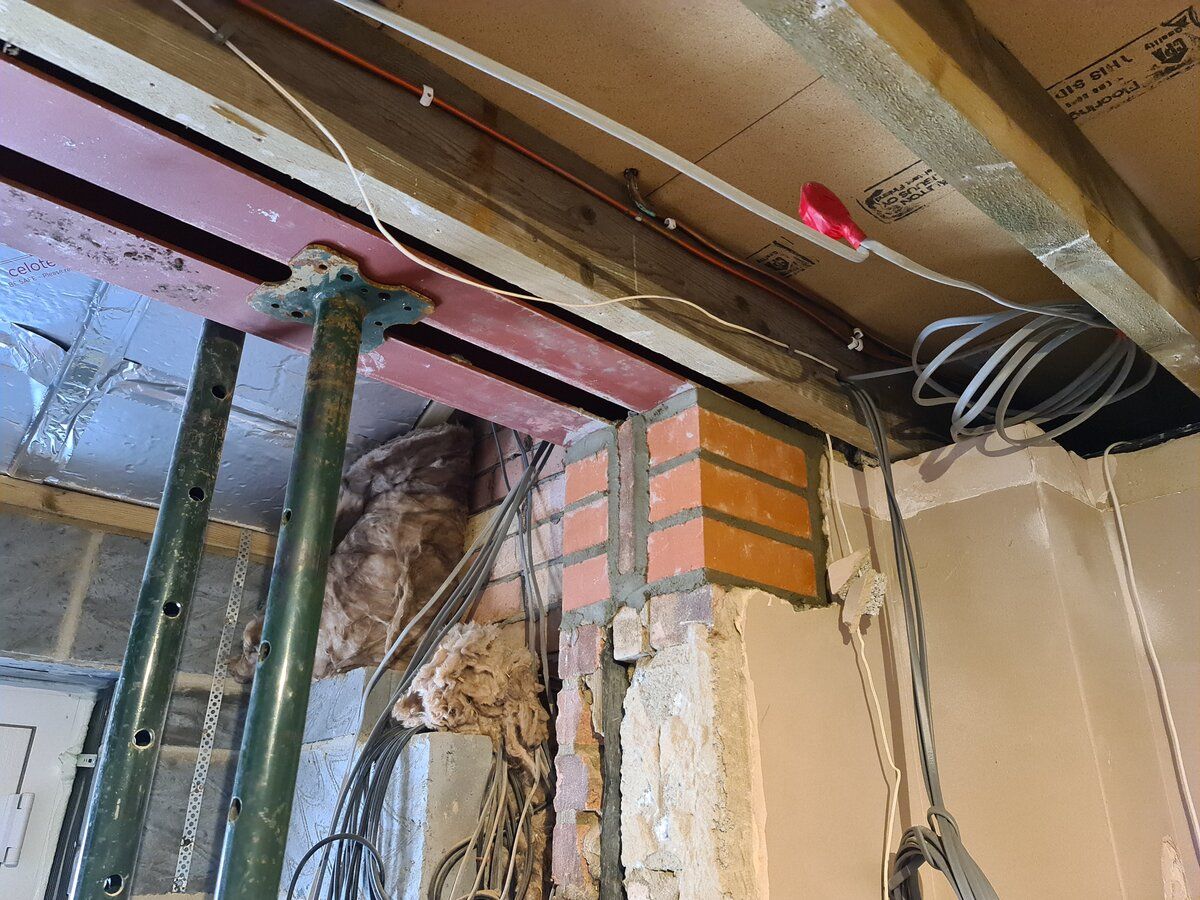 We then turned our attention to the other end, where a steel post will transfer the load down to the original foundations - we had to dig out the brickwork to get down to concreteand make an opening large enough for the 100mm2 post base to fit down in to it, then cast and pour concrete around the fixing bolts. In a day or so I'll nip them up to make sure everything is solid but I honestly can't see it going anywhere in a hurry now it's in and bolted together 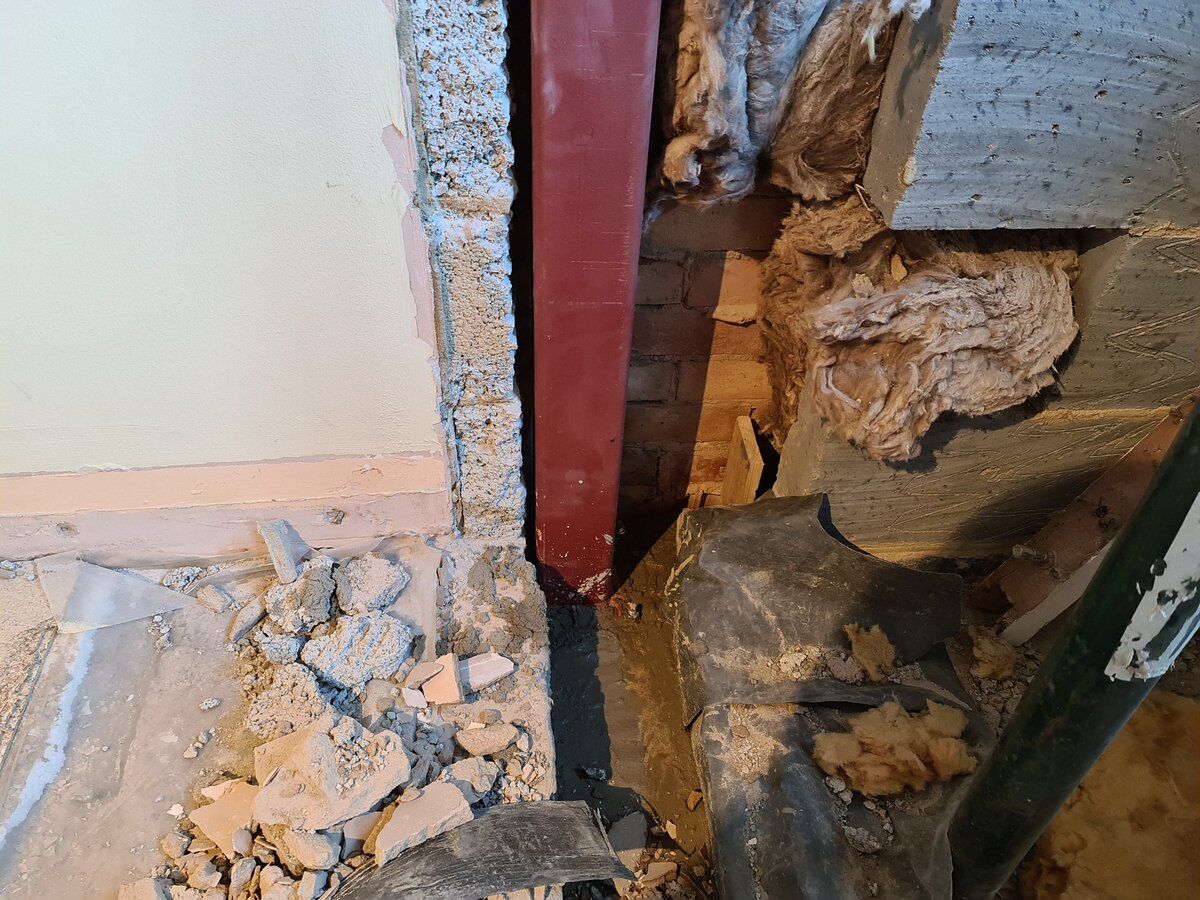 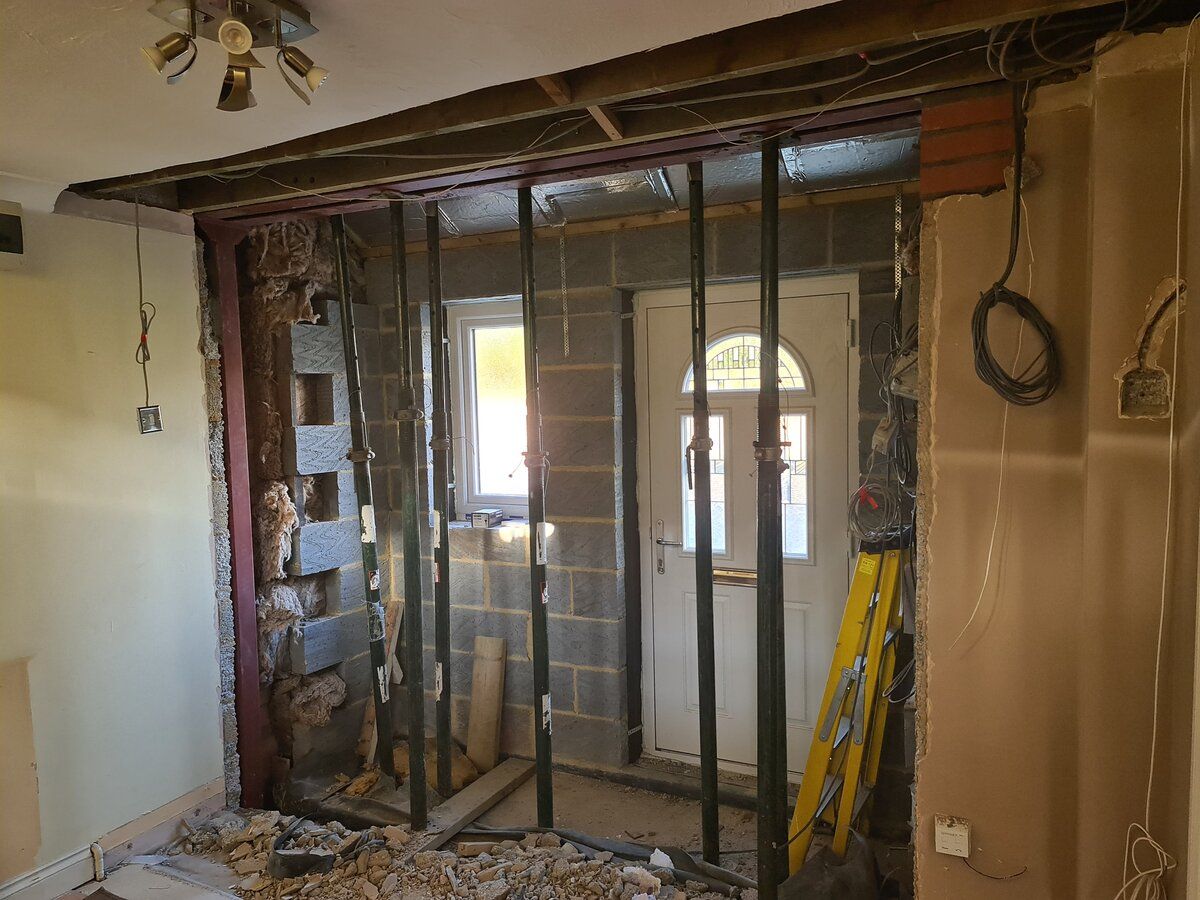 I've still got a decent amount of rubble to clear up

Also the post isn't yet tied in to the existing blockwork - I'll nibble it out in 4 or 5 spots then have some tek self drilling bolts to screw in to the post before back filling with a resin anchor. Once thats done I'll have to finish the floor and blockwork before getting the building inspector back in to check out the progress

You never know, we might have a downstairs loo this year at this rate