What have you bought for the bike today ?

With my new wheels arriving soon, yesterday I bought a cassette removal tool, chain whip and a chain breaker. I test rode another bike a few weeks ago and it made me realise how underpowered my current brakes are, so while I was at Decathlon I picked up a pair of brake pads. Now, I had only had a few hours sleep, and it didn’t occur to me until I was on the way home I bought a pair of brake pads, as in, one pair....for two wheels.. good one, so I’ll have to go and get another set of brake pads at some point. I also looked to get some kind of chain degreaser but they had nothing in stock

I picked up a Specialized Phenom Expert saddle for my mountain bike. I already have one on my road bike and love it. It's rated highly for road and mountain so I see no reason not to have the same saddle on both bikes. Now the two most imortant connections to the bike will be the same for both my bikes. Phenom Expert saddle on both and Time ATAC Alium clipless pedals on both. Now it's time for a new pair of shoes. Got sized for a pair of Specialized Recon 1.0 shoes. Now I just have to find someone with my size in stock in black.

You wouldn't believe it with my bad spending habits but I didn't buy anything for my bike this week. I have been eyeing up Wahoo element though....

Just received the new Fat Lads At The Back,winter jacket in black & orange,looking forward to some warm dry cycling now !

Well,the new wheels arrived from Hunts. They look great, and they're light AF, but jesus christ am I having issues.

All went swimmingly moving the cassette over and re-indexing gears. It was difficult to get the tyres(Michelin pro Endurance 4's) on to the wheels initially so I used a tyre lever as a bit of help. Turns out in both cases I'd pinched the inner tube when I did this and had to replace both inner tubes. Nice one!

At some point in the day I'd noticed my (almost brand new) track pump from decathlon isn't registering any pressure until about 30 psi, then it was registering ok, so i assumed it was working fine once above 30psi.

4th and 5th inner tubes we're at now. I've got a blister on my thumb from struggling so much to get the tyres on to the wheels, I'm pissed off already, I just want it done so I can actually ride them before winter.

So we go again, no tyre levers, get the tyres on and tentatively pump them up. Success! They're holding air!

I don't know exactly what happened, but it sounds as if the valve gave way.

Now i'm beyond pissed off, just completely fed up. I'm venting to a friend about how I cannot be farked, fed up etc. *BANG*, Another unmistakable rush of air. The front had decided it didn't want air in it either.

5 inner tubes punctured so far and I still don't have a set of usable wheels. I wanted to see what had happened in the front but I can't even get the tyre off now so this shoot will wait until another day. Probably farking April when the weather picks up.

) and spare fittings,plus some bike stands.

A Lusso Leggero thermal jacket, Northwave winter boots for the SPD equipped bikes and some Five Tens for use with the MTB & flatbar bikes 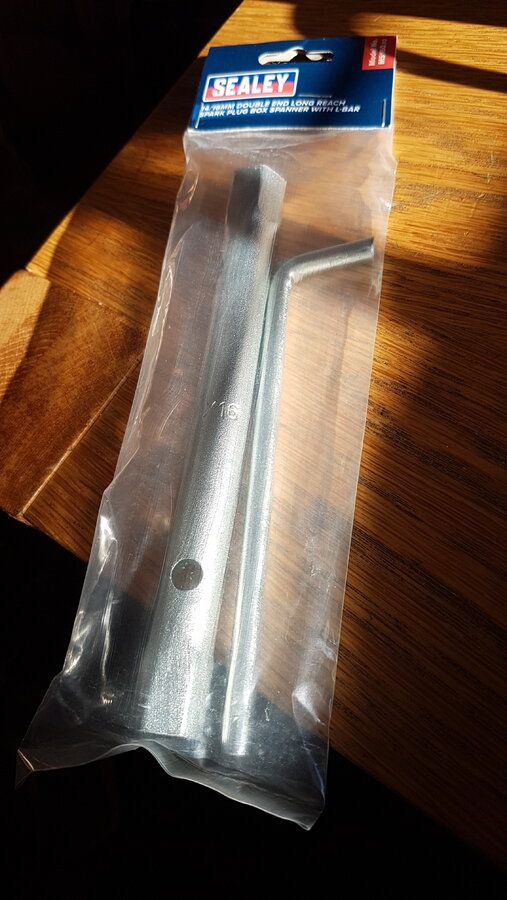 This, to get the Revell crank bolts off...

razabbs said:
My rant from yesterday
Click to expand...

Today I've ordered some puncture repair kits and new inner tubes, think I know the issue; hopefully all the inner tubes I went through can be repaired, at least.

It was a couple of days ago, and it hasn't arrived yet, but THIS left SPD pedal! My £5 offer was accepted. (My old pedal's bearings feel so knackered that I am sure the races will be damaged too. I was going to try to service the pedal but cut myself trying to get inside and promptly gave up! 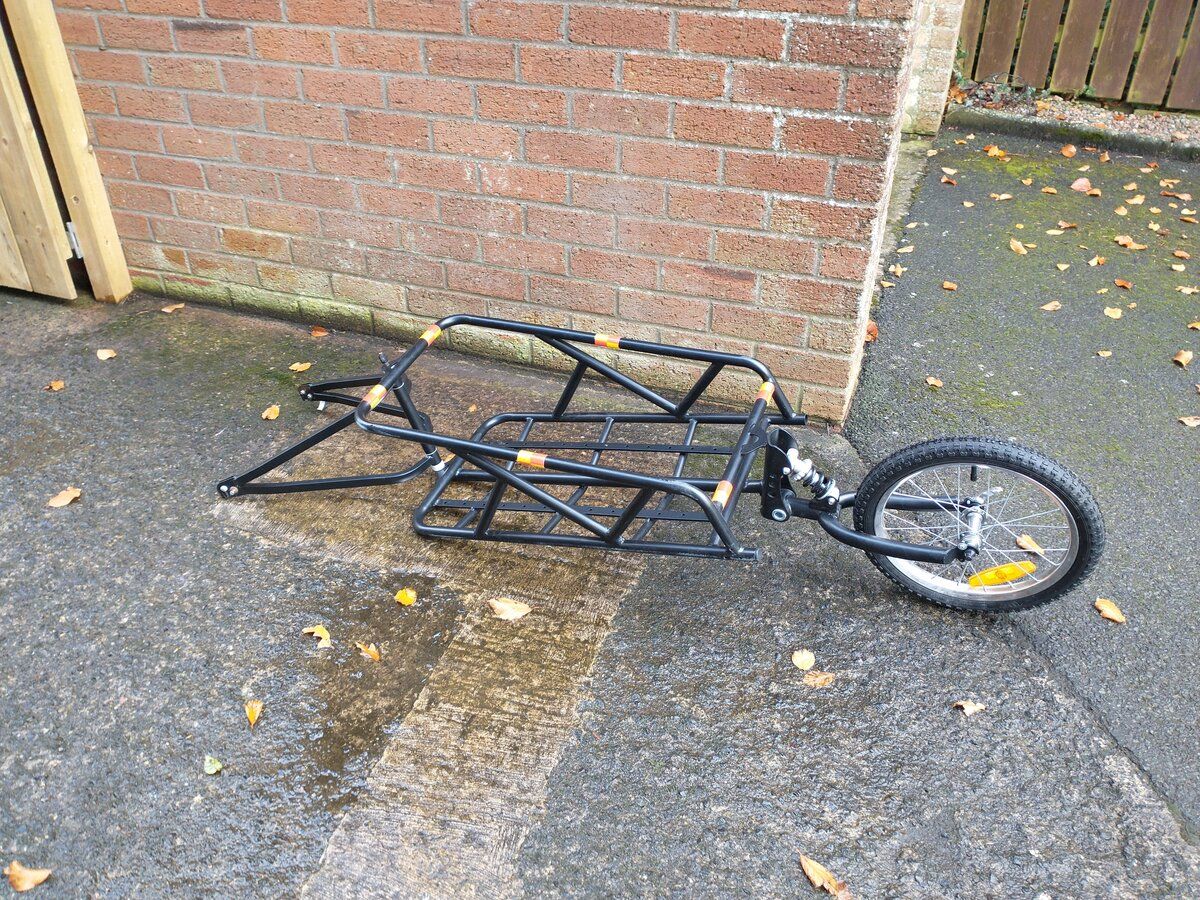 New arrival... Bob trailer. Just got to work out how I'm going to connect it to either my fat bike or Alfine hub tandem as the supplied skewer with the correct trailer fixings won't work with either!

Prescription cycling glasses. I had a pair a couple years ago but they met a grizzly demise and I've ruined a perfectly good pair of normal glasses through wiping road/trail grit from the lenses.
Just waiting on the prescription inserts to arrive and then I can go out and look as ridiculous as all the other roadies

ColinJ said:
It was a couple of days ago, and it hasn't arrived yet, but THIS left SPD pedal! My £5 offer was accepted. (My old pedal's bearings feel so knackered that I am sure the races will be damaged too. I was going to try to service the pedal but cut myself trying to get inside and promptly gave up!

The pedal arrived today, a day earlier than expected. The surfaces are scratched but that was as explained and shown on the ebay listing. The bearings feel really good and I'm sure that the SPD mechanism itself will be fine - I've never had a problem over the past 20 years on 4 or 5 sets of SPD pedals. £5 well spent!

I have since managed to get the old pedal apart so I may try to sort that out after all. If I do fix the old pedal, I'll have to look out for a used RH pedal to match the one that I have just bought!

I will be needing another 1 or 2 pairs of SPD pedals for my next couple of bike projects.

pedals for the MTB. also added the old pedal extenders again, now that fall/winter is here. feet no longer hang over the edge. the snow boots haven't shown up for bike rides yet, but they're comin' 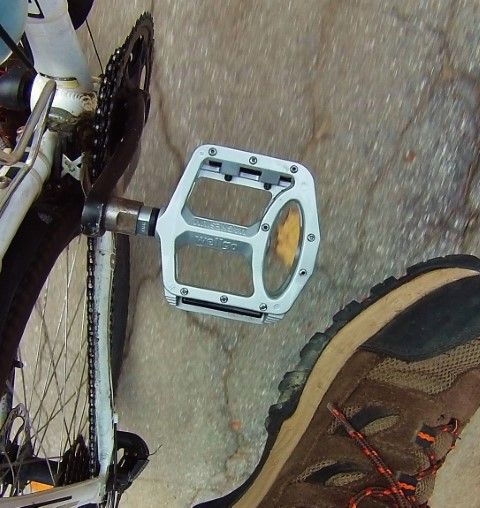 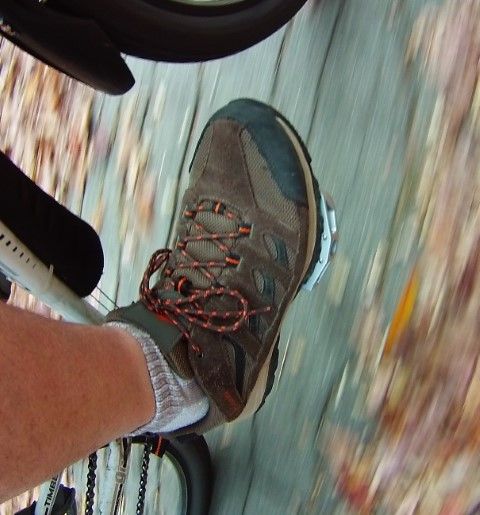