Below freezing overnight and a bit nippy this morning so thought a lot of the muddy trails would be pretty solid, how wrong I was, quite a quagmire. Lovely morning for an MTB ride over Towton Moor, through to Bramham Park, Boston Spa and back home. 20.6 miles I’m filthy and knackered but a fabulous ride. 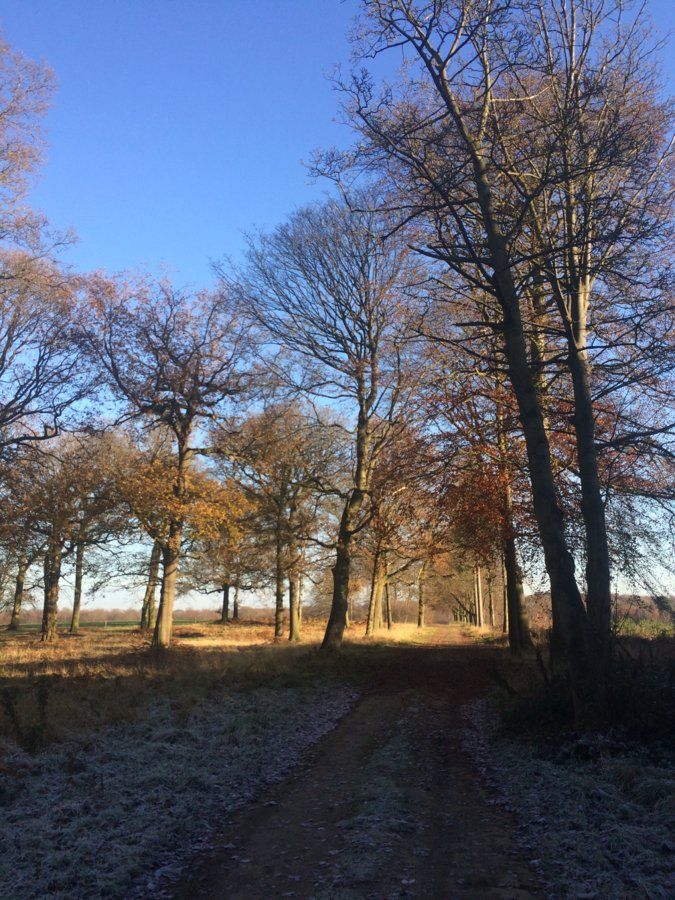 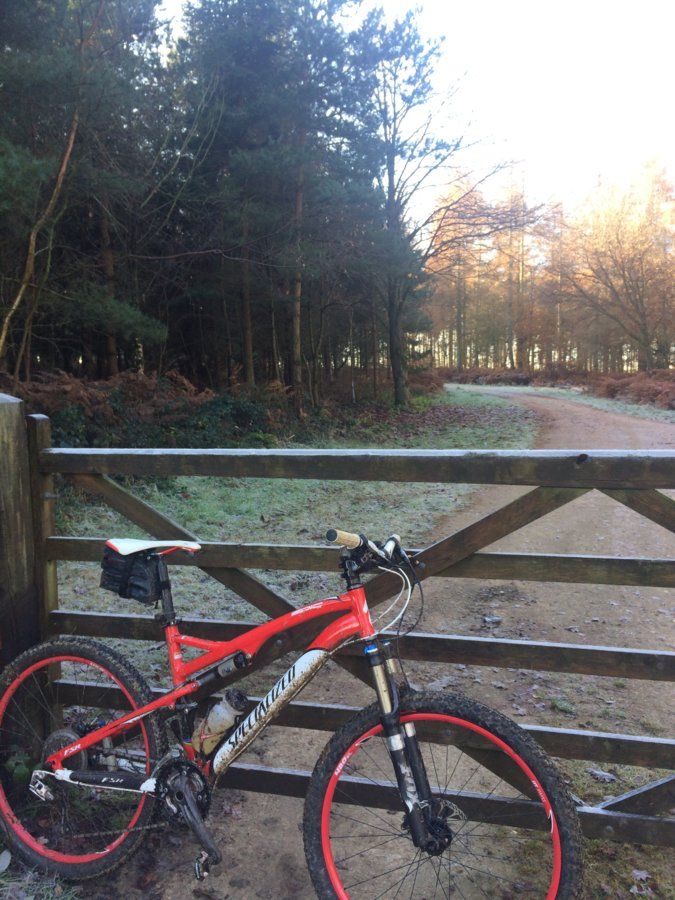 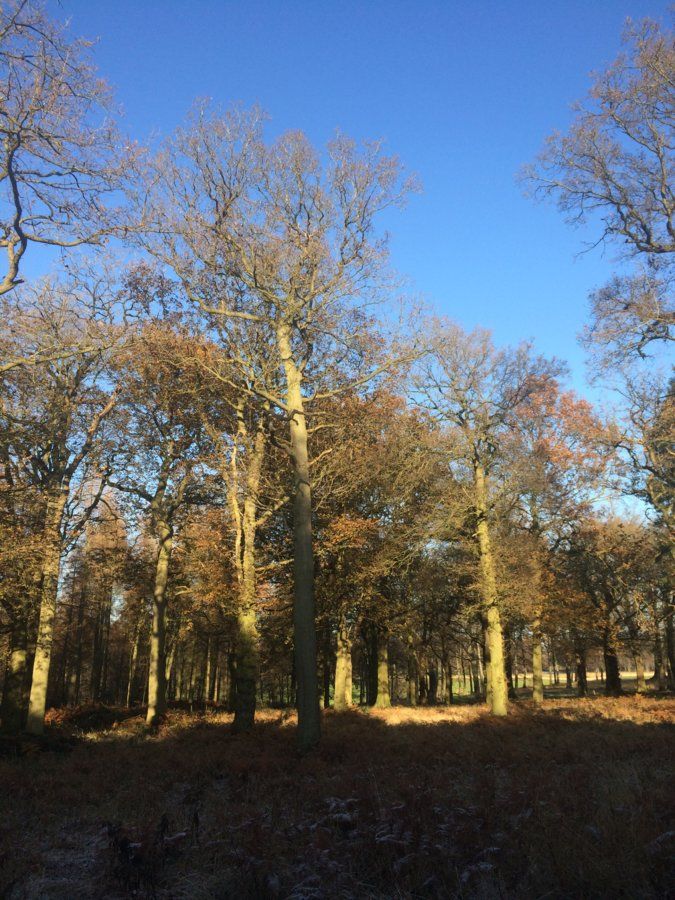 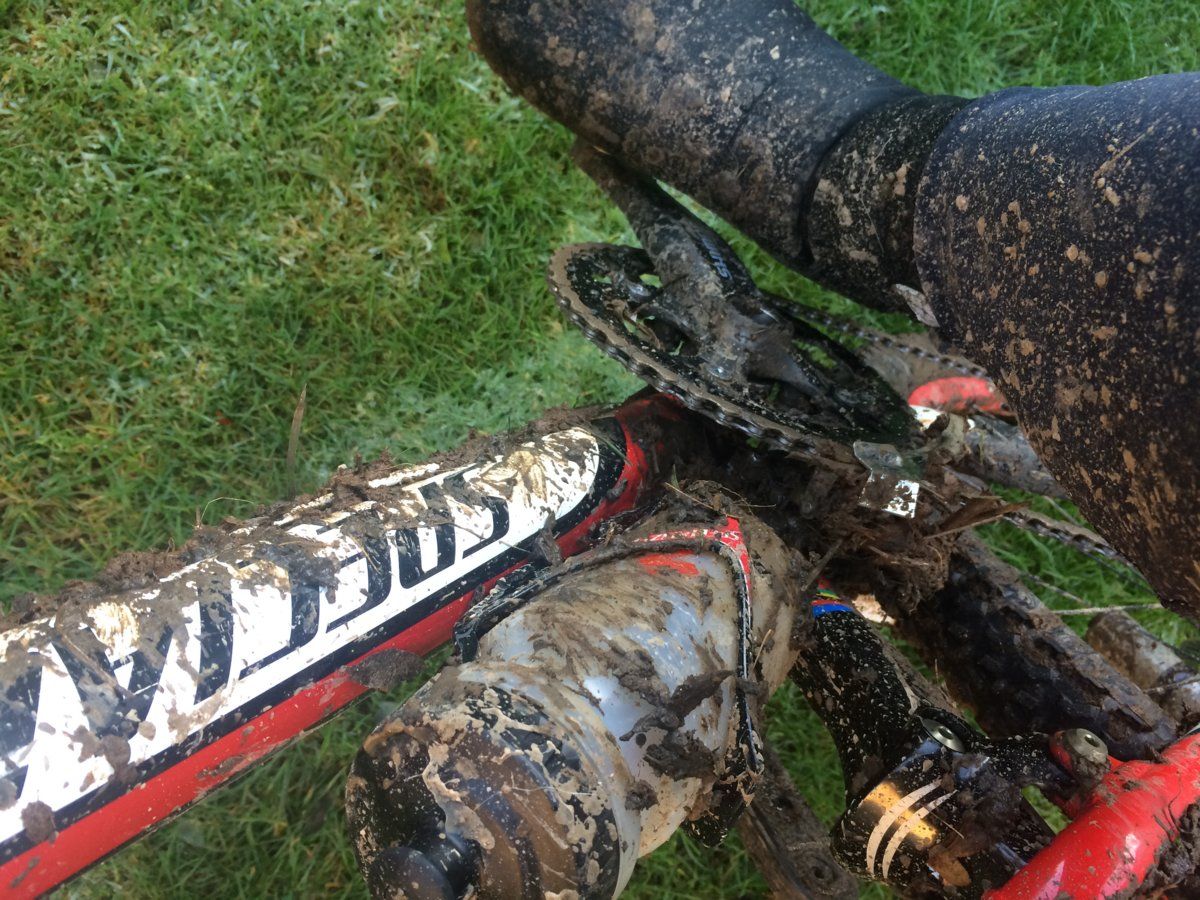 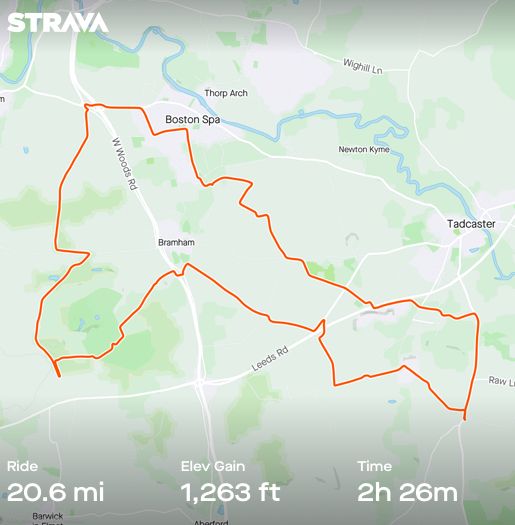 This was literally the only opportunity this month I had to fulfil the challenge obligations and it was 50/50 whether or not I’d drop out. Looking out of the window at an extremely cold landscape and negative temperatures I had to muster every bit of motivation I could to haul myself out of the house!
Met up with some of my Saga CC compadres a little after 8am for our little pre-planned trip down to Lichfield. It was 2 below on arrival and didn’t really get much warmer as the ride started and progressed, reaching as low as -4 in more remote areas.
I was in full winter garb, including cling film round the tootsies and latex gloves under my winter gloves, for a little added protection!
This paid off, at least for a short while, when one of the crew heard that all too familiar “ssssssssssssss”........

Yep. First flat of the ride less than eight miles in. Turns out it was the valve itself that had unscrewed. As none of us had the tool to tighten it back in, we pleaded with Rob to just put a new tube in with a view to repairing the dodgy one at home.

After about half an hour of faffing about with it, he relented and I gave him on of my spare tubes. Of course, the lack of movement in such conditions made starting off again a massive chore, as my digits were now borderline numb!

Several thoughts entered my head at this stage:
Do I make my excuses and go back to the car?
What the f- am I doing here?
Should I have just laid in bed?
Do I get to Lichfield and grab a train home?

I (foolishly) opted to just bat on and get to Lichfield, eventually warming up a tad, though not entirely, but enough to be able to cope with the frosty, slushy roads, freezing fog and poor visibility.

Arriving in Lichfield, two-and-a-half hours after starting and having only covered 28 miles, literally and ironically outside of a bike shop, Will got the all too familiar “sssssssss” treatment too.....

We pulled in at a cafe some one hundred yards up, Will desperately trying (in vain) to fix his puncture while the rest of us thawed out. He soon came inside, defeated and despondent, too cold to attempt said repair. We talked him into taking his bike to the shop outside which he developed his puncture so that it could be fixed while we defrosted somewhat.

The cafe was nice- busy and a tad expensive but no complaints about the quality of the food which, for me, was a bacon butty with three rashers of thickly cut, “locally sourced bacon” washed down with a latte and followed by a cream tea. Ok wasn’t of Cornish standards but I was in no mood to quibble about the technical aspects of the dish!

An hour later, defrosted and ready to crack on, we fetched Wills bike from the shop- all fixed and with TWO new tubes- and pressed on with getting back to Willington.

It was no warmer despite it being midday and I just resigned myself to the fact that it was going to be another cold slog back to the warmth of my waiting car in Willington.

This half of the journey passed without incident, making our way through largely familiar villages and lanes, being mindful of the potential ice rink beneath our wheels!

As we crossed back over into Derbyshire, a bright yellow anomaly began to emerge from the sky which had a profound effect on our core temperatures. This anomaly I later found out was called “the sun,” apparently it appears in many parts of the world, sometimes for many hours a day, and on occasion it has graced these shores, though it is rare......

Enjoying the warming effects of this bright yellow sky ball, and conscious that following the pre-planned route would not deliver the miles I needed, I decided to split from the rest of the group so I could follow an alternative route to get the job done. I was also able to nab a couple of pesky veloviewer squares in the process, which were evasive for many weeks due to the roads being largely underwater. Today they weren’t, and the squares were got. However the “anomaly” had been replaced yet again by freezing fog and the old core temperature (and digits) began to plummet again........

On completion of these squares, I needed just 7 miles to complete the challenge and so I had to think quick to provide an alternative to what would have been maybe five miles back to the car. I was able to do this, and arriving back in Willington I was at 62 miles dead, so to get over the line I had to quickly circle the co-op car park to squeeze out what I needed to get it done.

Back at the car, 62.3 miles to the good and very chilly I was able to thaw out as I made the half hour journey home, pleased that I grabbed the point I needed by the skin of my teeth. 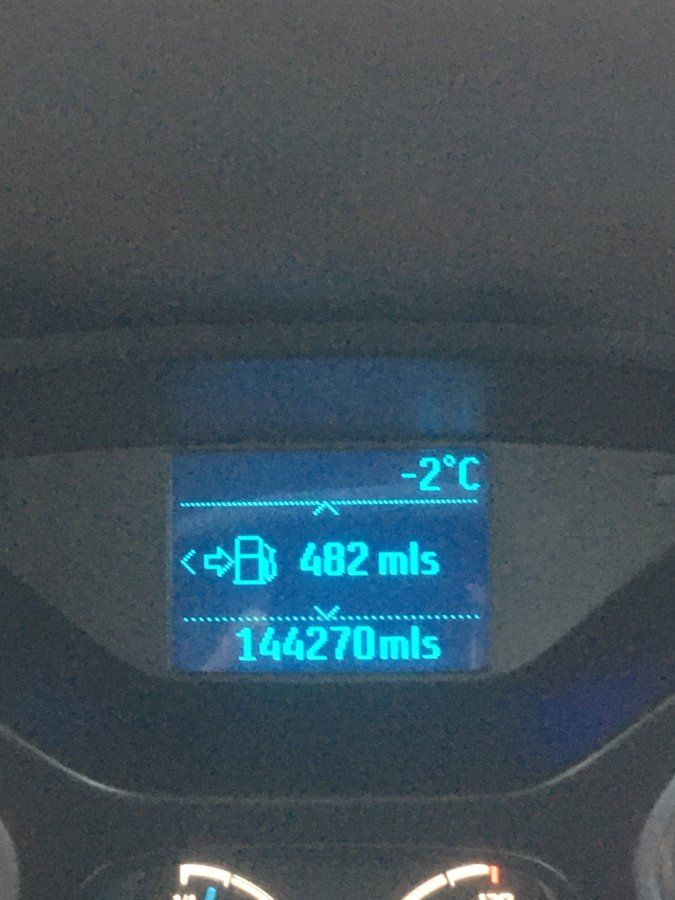 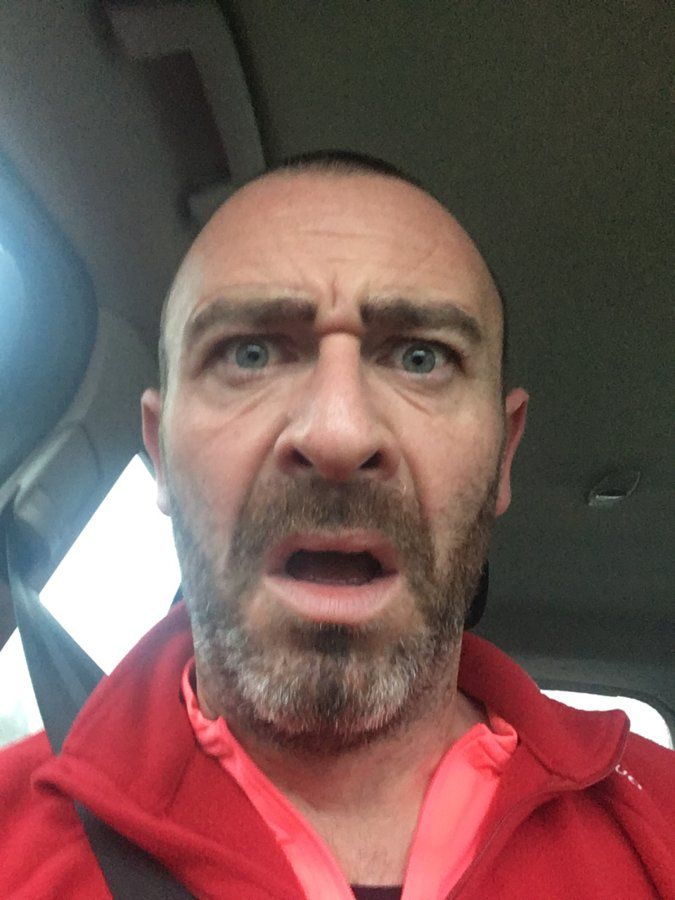 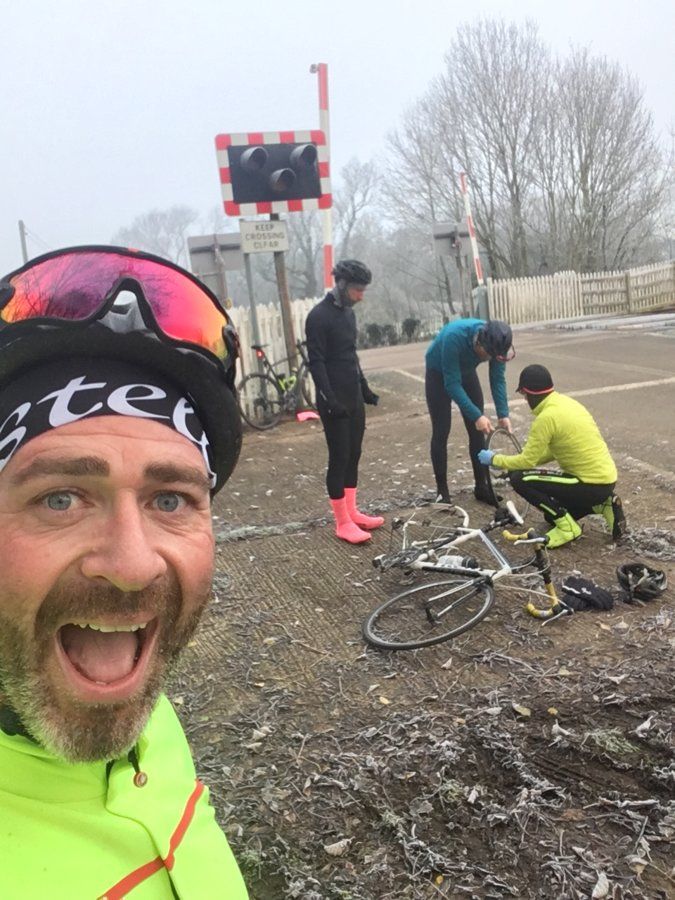 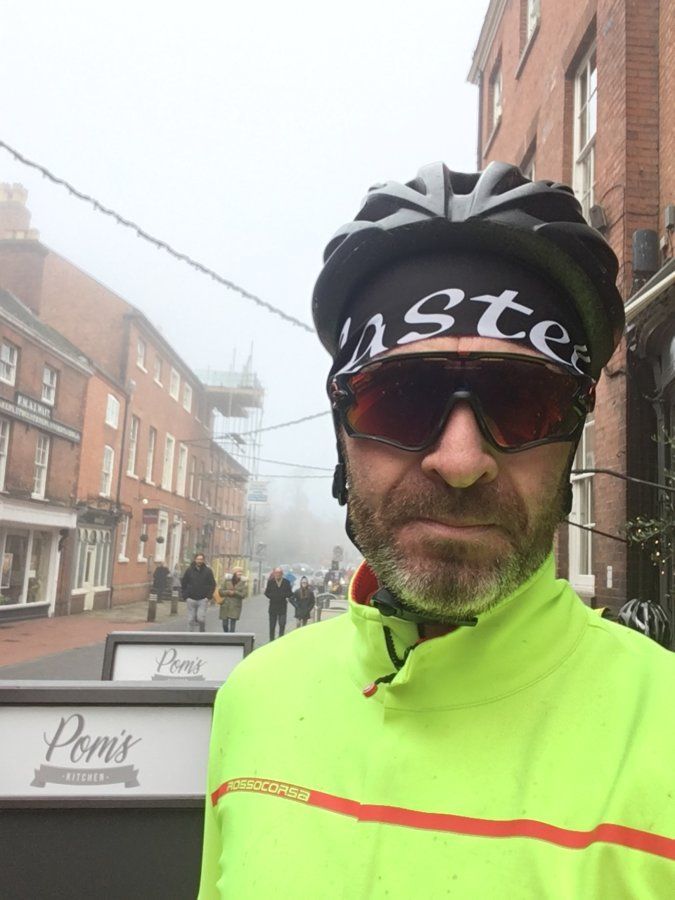 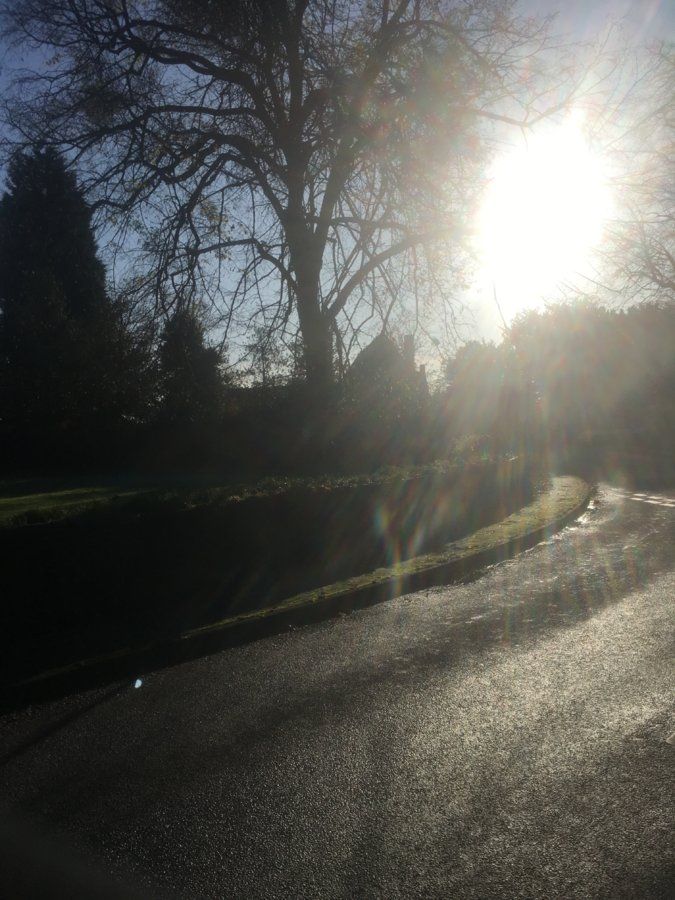 6 out today. Margaret PR, Sara P, Steve E, Pete M, Rob A and me. We took the traditional route to Fladbury. I stopped to chat to Keith W at Defford. He was waiting to meet the CTC riders. A bit further on the CTC ride came the other way with Bill D in the role of leader. Sara had a visit from the puncture fairy above Nafford Locks where the Avon was flowing fast. The cafe did us proud before we continued in traditional fashion. After the airfield the road was closed but we were allowed through with a safety warning. The ford at Pinvin was 4 feet deep and the brook running fast and cloudy. Sara peeled off at Drakes Broughton while Pete called the Stonehall Common dodge. The ride had been run on frost free roads despite a drop in the temperature in the night. Indeed after midnight the temperature had risen. We had some lovely sunshine too. All in all a very pleasant outing. 57 smiles 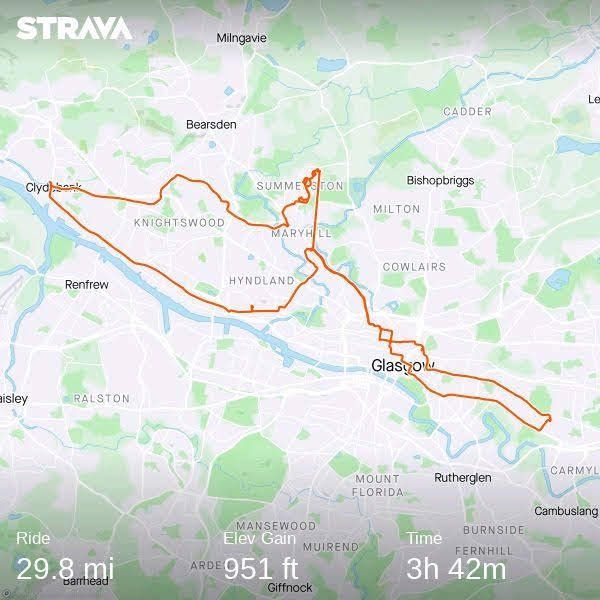 Family stuff to do today.
Clydebank first and despite the frosty start I opted for the canal path. Just took it slowly and got there safely.
Headed back towards Glasgow via Partick and Maryhill , then east to Tollcross.
Back home via the city centre with a stop at Evans to buy new shoes. Their website said the ones I wanted were in stock.... they weren't.
So Shoeless Joe headed home.

First slight Strava hiccup for a while.

Saturday was a nice ride into town, a bit of shopping and a ride home. Waited till after ten when it warmed upto above +2.
Lovely to be out even though the lanes are quite messy. Out for almost 2 hours nice and chilled and a big smile planted on ya face.

Left the house this morning at 06:30 to meet @13 rider to do our December imperial century. Nice easy 11 miles to the meeting point with toasty hands and feet thanks to the warmers I bought from Lidl.

I arrive at the meeting point first but within a couple of minutes @13 rider turns up and we set off. Straight onto and up Humble Lane, it is icy but it normally is around there, we get up the hill and descend gently towards Ratcliffe on the Wreake but the other side is ice free but we continue at an easy pace. Through Gaddesby and onto Pasture Lane which has permanent signs warning off ice!

The roads are now looking frosty but ridable, into Great Dalby and bang, @13 rider is down

Luckily he is okay and more importantly so is the bike. We decide we are being stupid so walk back into Great Dalby and ride to the A607 and ride the main road back to Leicester, ride abandoned

As mentioned above I had a bit of tarmac interaction on today's ride I'm perfectly ok just a slightly scuffed jacket and the bike fine I managed skillfully to protect the bike with my body .We probally pushed are luck and was too ambitious but we live to ride another day. The good bit unintentionally I finished the 50km challenge

13 rider said:
As mentioned above I had a bit of tarmac interaction on today's ride I'm perfectly ok just a slightly scuffed jacket and the bike fine I managed skillfully to protect the bike with my body .We probally pushed are luck and was too ambitious but we live to ride another day. The good bit unintentionally I finished the 50km challenge

Good job you weren't wearing your new posh jacket. Our lass was a bit surprised when I walked in the door. I told her I missed her so much I had to come back from the ride to just see her

13 rider said:
As mentioned above I had a bit of tarmac interaction on today's ride I'm perfectly ok just a slightly scuffed jacket and the bike fine I managed skillfully to protect the bike with my body .We probally pushed are luck and was too ambitious but we live to ride another day. The good bit unintentionally I finished the 50km challenge

I'm glad you're okay. Not good conditions for it here either.

galaxy said:
I'm glad you're okay. Not good conditions for it here either.
Click to expand...

Ditto. Have an automated no cycling warning, it's the frozen water sat on the cover of the garden table just outside the back door.

I was the only one hard stupid enough to turn up for our club ride today. Stuck to the club route anyway, and got in 44 miles of very pleasant cycling in glorious sunshine. No ice, but my toes tell a different story. Rode out to the South via Whitminster, Frocester, Cam and Stinchcombe to the Tortworth Farm Shop Café. A couple of hills and a black coffee to keep me warm. Then back via Newport (no, not that Newport), Cambridge (no, not that Cambridge) and Frampton. Other than one small flood, which I managed to get through without dunking either foot, nothing untoward today. The others missed out.
Cheers, Donger.

I also have an automated no cycling warning - in this case, if the cats don't want to go out, then neither do I...

Had to abort ride today. Waited until 10:30 saw the fields were white but was surprised how much ice was still about when I set off. Was particularly bad on cycle paths but better on roads heading toward Kent estuary. Thought I’d be ok on my normal quiet lanes under trees but these were treacherous in places. Headed to Carnforth and the wonderful Brief Encounter cafe at the station, excellent soup and cake. Arrived back at bike to find a flat front tyre, fortunately being at a station, a train showed up so I jumped on it to get home. Frustrating but in one piece. Flat turned out to be a loose presta valve core, had a few issues with cores unscrewing recently.
Last edited: 1 Dec 2019

club ride today , took it steady as the roads were dicey to say the least !
https://www.strava.com/activities/2904392661

cyberknight said:
club ride today , took it steady as the roads were dicey to say the least !
https://www.strava.com/activities/2904392661
Click to expand...