wafter said:
Looks like a nice ride and raises another great point that in these times of plague night rides have to be a fantastic idea for avoiding other people - it's still a bit chilly at night for my tastes though!
Click to expand...

It was blissful, there were a few boy racers out burning about on the quiet roads though.

Arjimlad said:
It was blissful, there were a few boy racers out burning about on the quiet roads though.
Click to expand...

I bet - I love the peace and solitide of riding at night; although for some reason never seem to do much. Also rightly or wrongly I feel less comfortable about riding far from home / covering a lot of distance at night.

Jenkins said:
I'm fairly lucky that most of the roads round here are not in high population areas, while the vast majority of the other cyclists & walkers using the roads are going the other way to me so it's fairly easy to follow the distancing guidelines.

As I'd taken the day off work to go to a (cancelled) event in Norwich, I took the opportunity to get out for a few hours this afternoon on another glorious sunny day, but with a bit of a cold easterly breeze. Out via Levington & Nacton to Ipswich where the lack of people & traffic was really noticable. I then headed for Wherstead and a loop of Alton Water and down to Shotley but unusually doing it in the anti-clockwise diretion. Other than the continued lack of traffic, at Stutton the biggest sign of the efect of the Government's shutdown was the complete closure of Alton Water park with the gates being locked shut - on any other day like this, the place would have been packed.
View attachment 510300
Continuing on through Holbrook, Harkstead and enjoying the view at Erwarton down the River Stour towards the River Orwell & Felixstowe
View attachment 510301
I got to Shotley and then headed back towards Ipswich through the villages of Chelmondiston, Wolverstone and then down the Freston hill to one of my favourite sights, which I make no apology for posting yet again, especially on a day like this
View attachment 510302
Again avoiding the busiest areas of Ipswich, I went round the top of the town and home via Rushmere St. Andrew & Bucklesham for a most welcome 50 miles of fresh air.
Another sign of the changing seasons - we've had the whites of snowdrops, the yellows of daffodils and now the blues of bluebells are starting to make themselves evident
View attachment 510305
https://www.strava.com/activities/3213060759
View attachment 510306View attachment 510307
Click to expand...

Good right up again. I know most of those places. On a day with blue skies the Orwell Bridge almost looks majestic.
By the way the blue flowers are grape hyacinth (Muscari). I have been caught out with those too.

Arjimlad said:
It was blissful, there were a few boy racers out burning about on the quiet roads though.
Click to expand...

I saw them out as well yesterday, it makes me so b.... angry they think it is a holiday. There are a lot of youngsters who are helping out at the supermarkets etc and I was served by a delightful lad yesterday who would have been at university but said he wanted to earn some extra cash. Good for him.

(could get to like this )... had to call at Dr this morning drop of my prescription so thought as it was lovely i would go back the scenic route.. 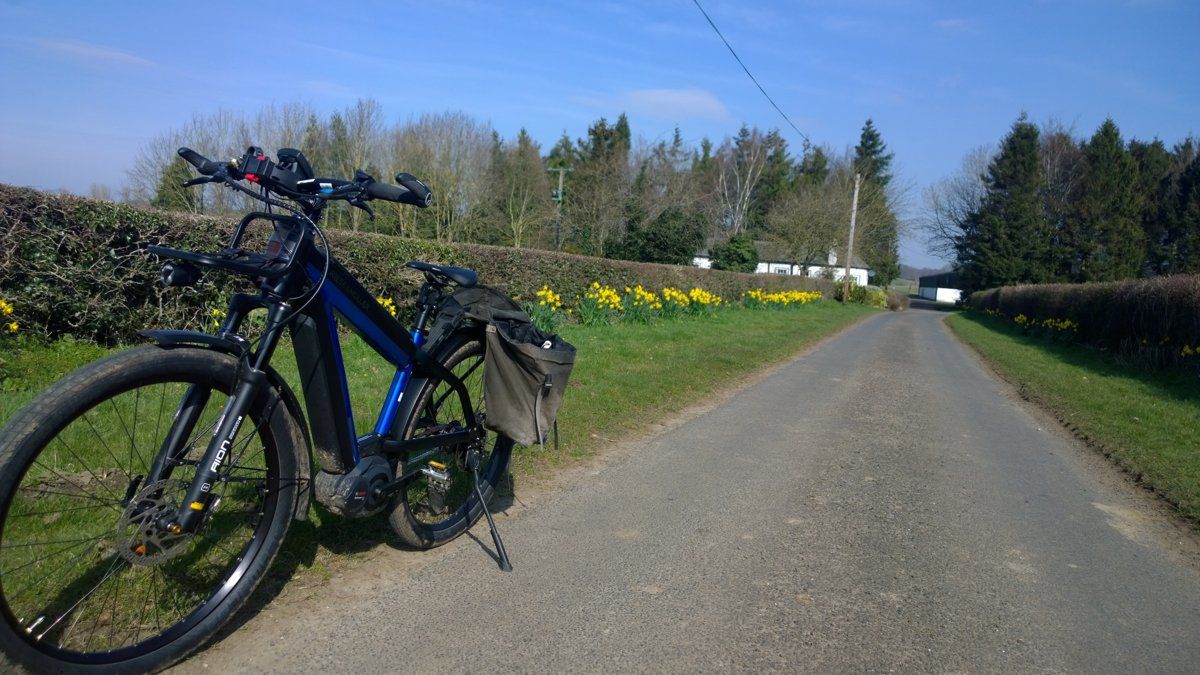 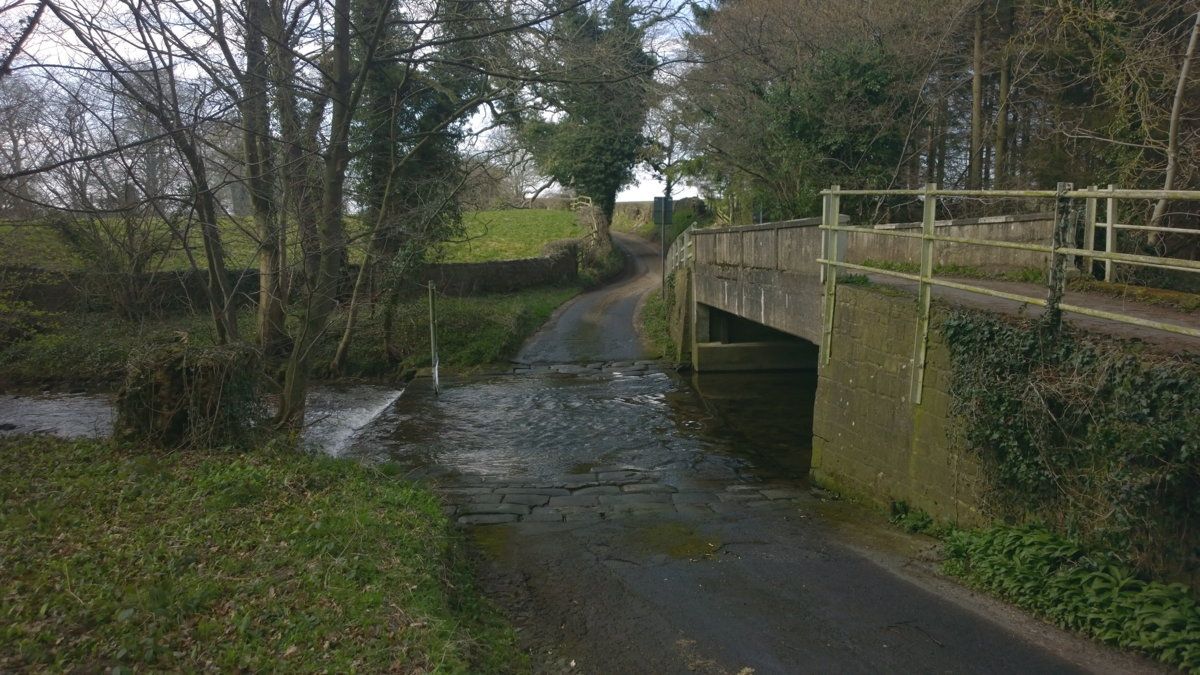 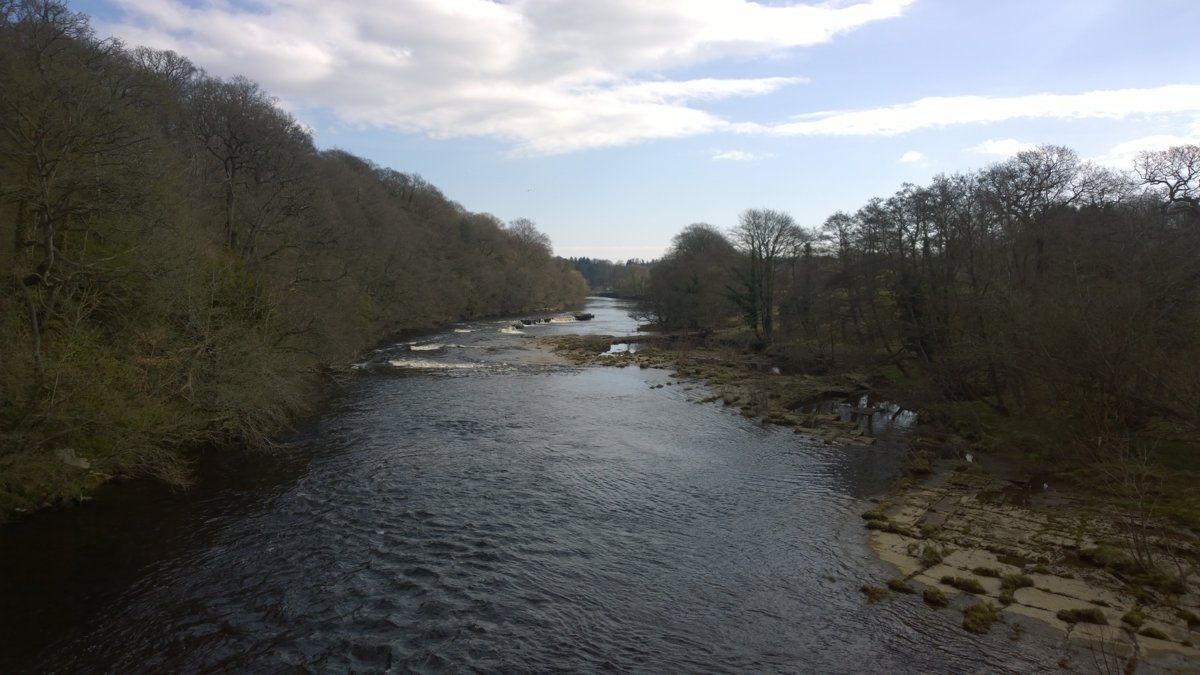 Almost the same route as yesterday, except stopped off at my Sisters, [yes, I know we're not meant to/allowed.] but kept isolation, distance for coffee stop since everything is closed.
Came across a man struggling on an e-bike. Turns out it was neither switched on, nor battery charged. He brought it to exercise on whilst off work. Didn't ask what he did for a living but he had some nice cycling type attire and a flash e-bike but clearly no idea.
I smiled all the way home!

Lovely day here so I did the Mach Loop. The A470 was completely empty. Even quieter than usual here that meant almost complete silence. 21 miles in total for me. I am a happy bunny. 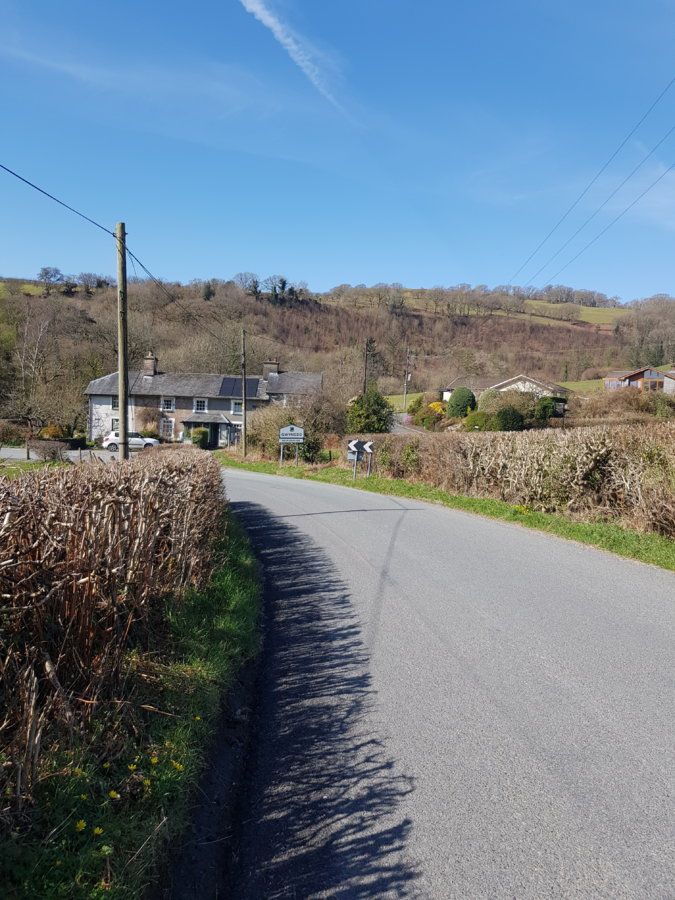 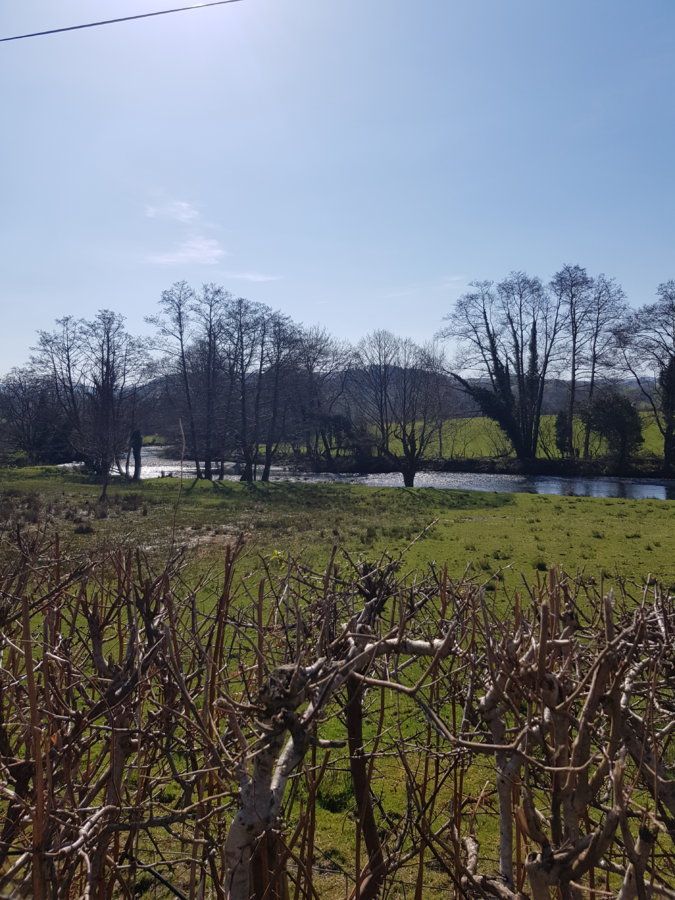 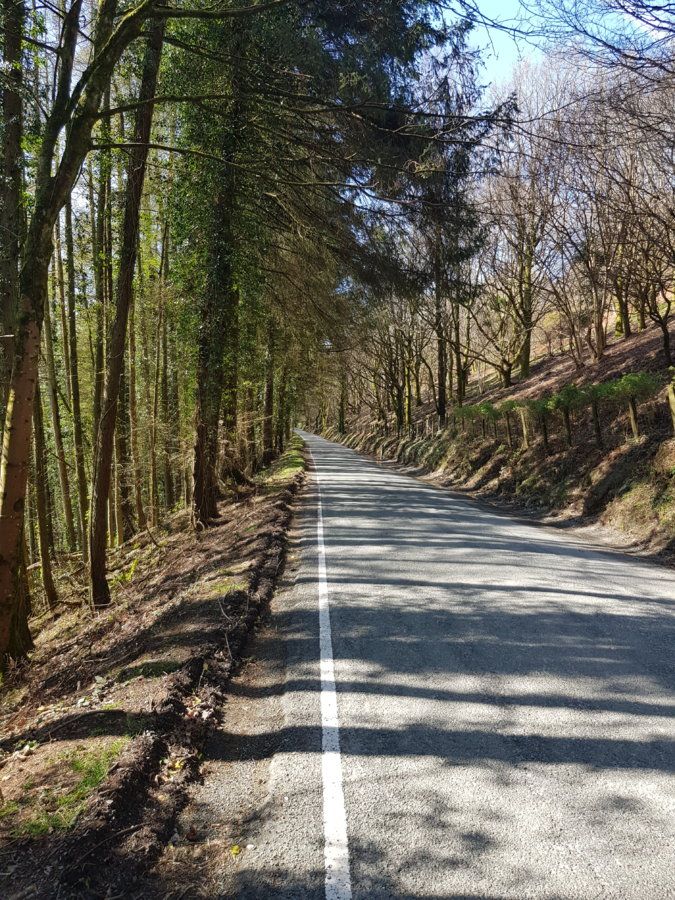 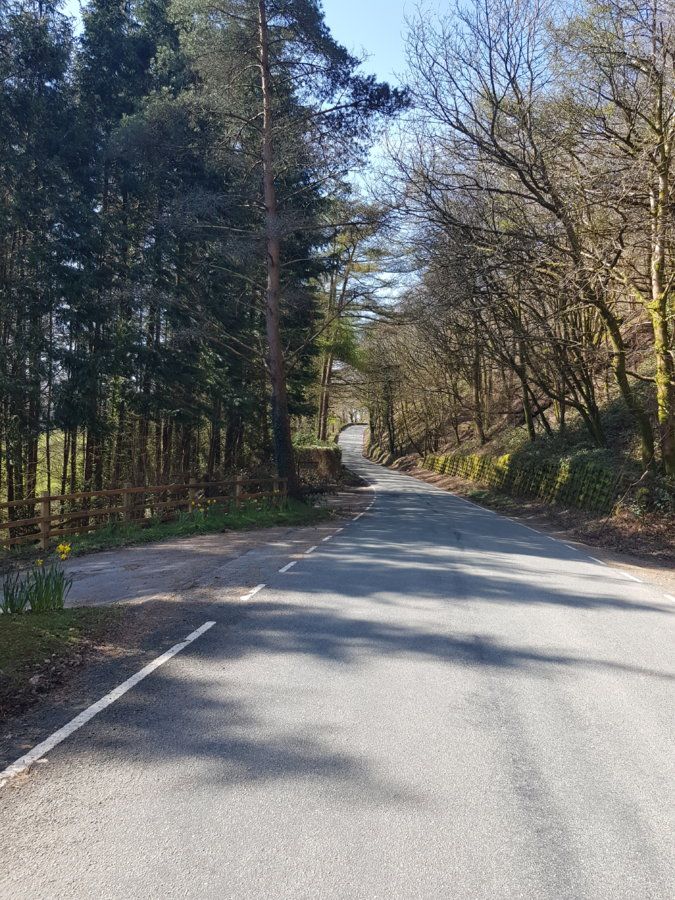 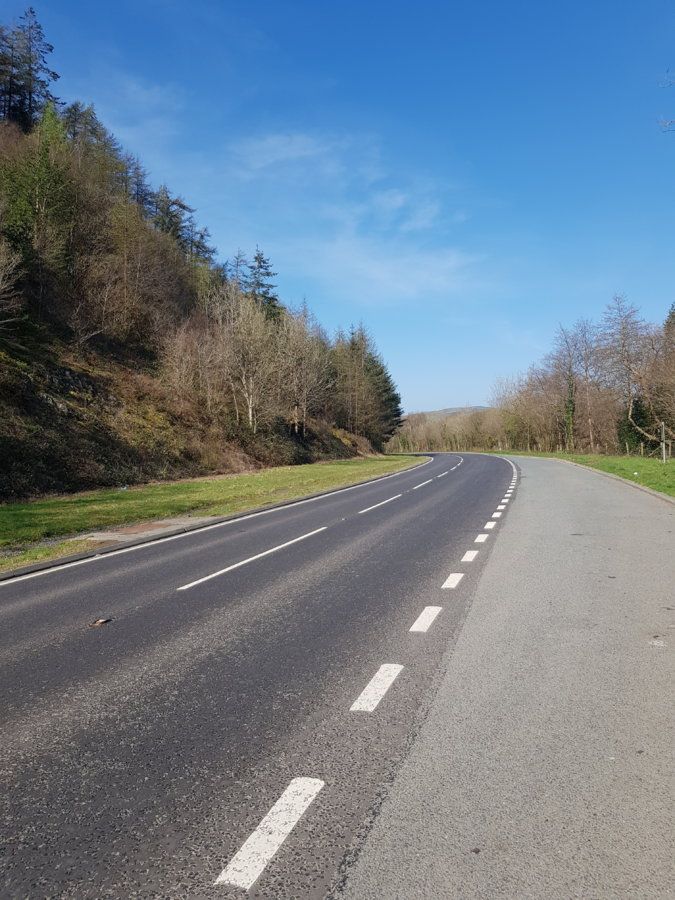 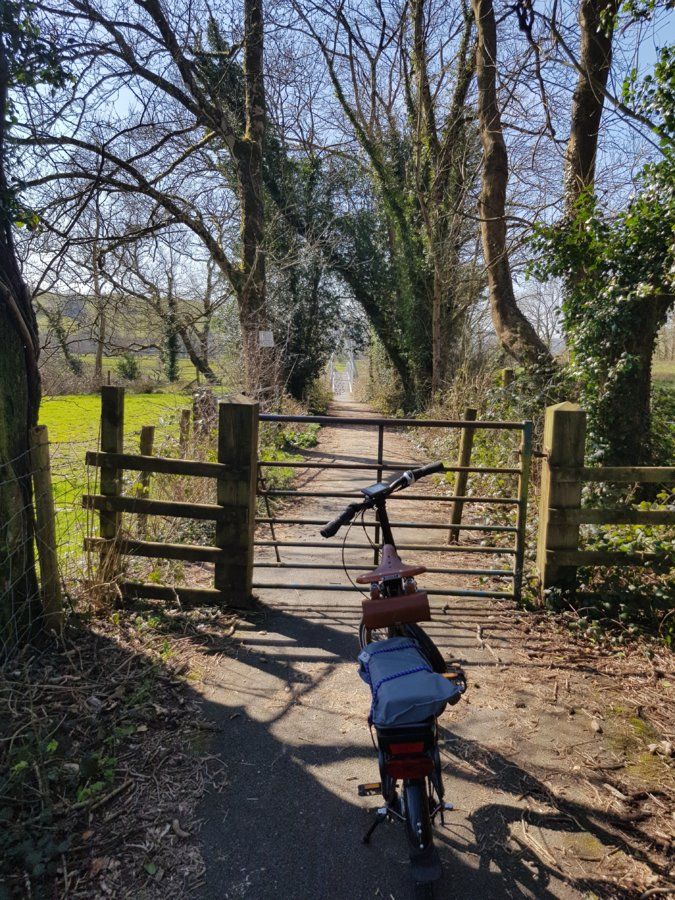 Lovely day for it, too.
Edit to add: I really felt it on this ride, just had so much fitness loss over the past two years. No more damned surgery!
Last edited: 25 Mar 2020

A late morning Boris approved bike ride today, again on the hybrid as the Defy needs a new gear cable and my spares all turned out to brake cables. Fitted the hybrid with a dual Garmin / GoPro support and my old GoPro unearthed as could not work out how to flip the image on the Lidl 4k, as the camera would be upside down, and whipped the speed sensor off the Defy.

North through Killinghall on the A61 where the number of cyclists appeared to notably exceed the passengers on the bus.

Took the Ripley by-pass for the first time since the Worlds Senior Mens time trail and again what a difference it was then, tents up and crowds partaking of drinks. Now just a forlorn tourist sign and far too many estate agents boards.

Turned off along the narrow lane to Nidd where for once the outline of the village church amongst the trees was readily evident to a camera.

Then pass Brearton to the B6165 and the northern end of Nidd where the entrance was nicely lined by daffodils.

It was now the Garmin finally shut down, it had spent the entire ride searching for satellites and in doing so had expired its battery. I know it was never good on clear blue sunny days for some odd reason but this was ridiculous. Looks like a Wahoo mount needed for the hybrid. Fortunately had got Starva recording on my mobile.

Back at Ripley largely followed the outbound route, was slightly concerned how quickly I was gaining on another cyclist on the climb away from Killinghall but any thoughts of trying to see if it was safe to pedal down the middle of the road were discarded as he turned off.
12.5 miles @ 12.3mph avg despite a mis-indexing Halfords 7 speed freewheel. Had it put on in an emergency need it for tomorrows commute last year and really needs replacing. Three lowest gears are fine but beyond that its game of chance. 677ft climbed 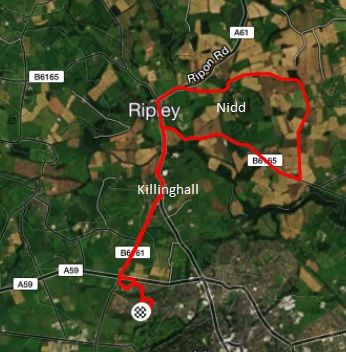 Took the Brommie into Oxford this afternoon as I needed to collect some stuff from the office. Only 8 miles but although we are experiencing awful times, it was lovely to ride in such glorious weather on empty roads. It was a nice distraction. 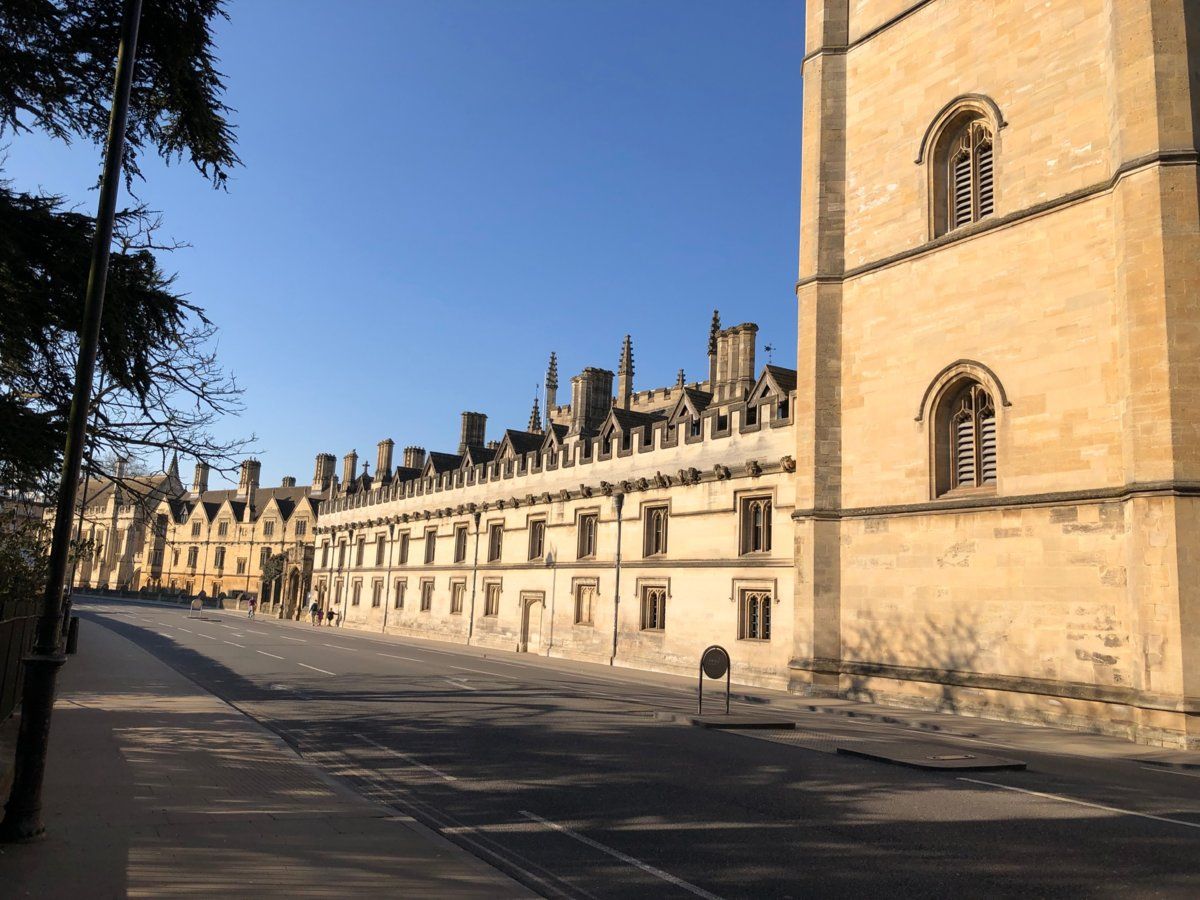 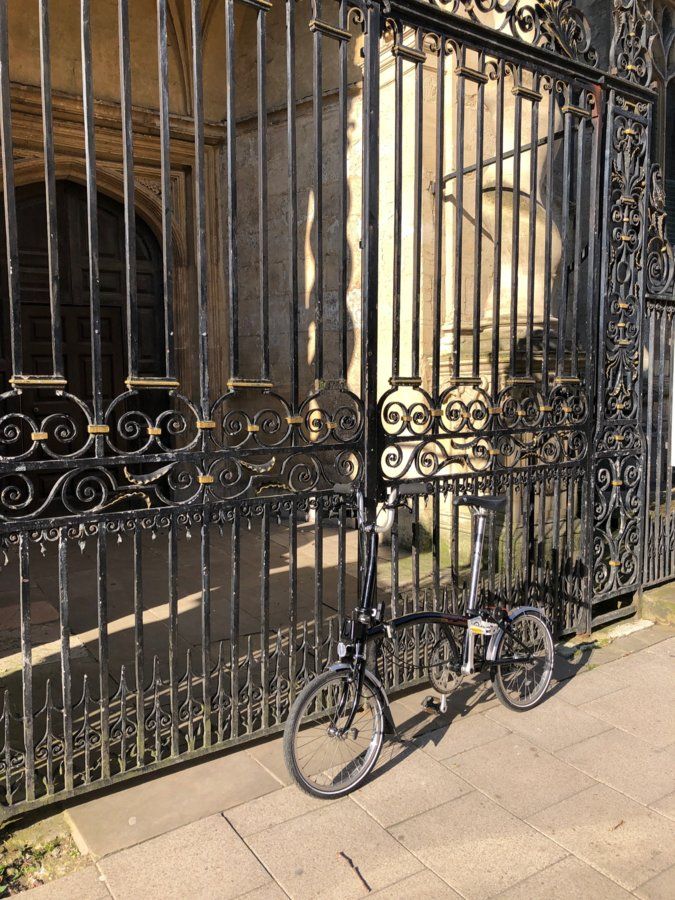 A loop down to Yealmpton, Worston and back to Newton Ferrers , then I picked up some prescriptions from Wendy at the pharmacy. I delivered them to houses in the village. Combining cycling with public service. 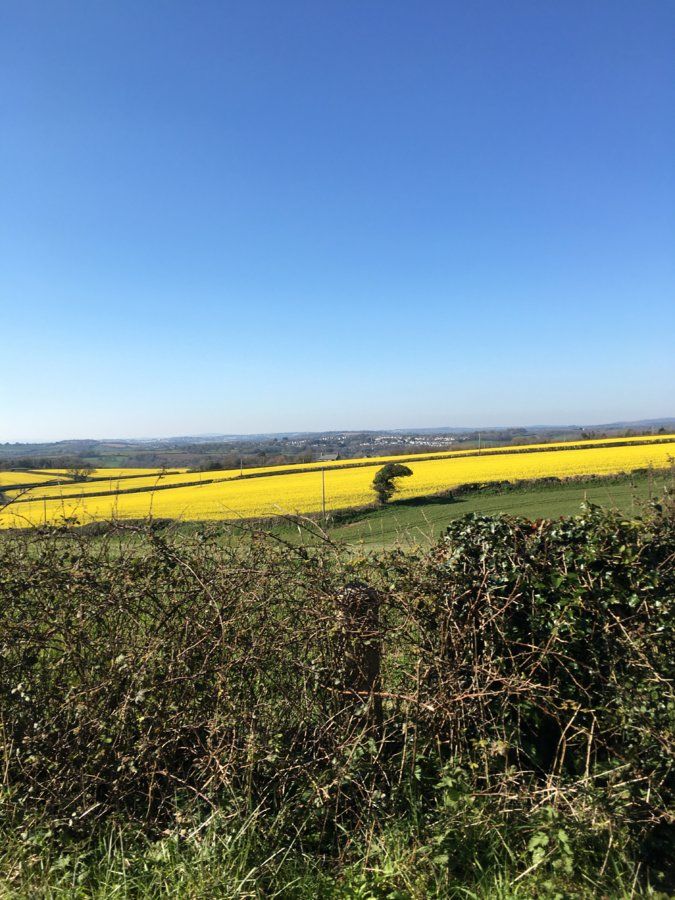 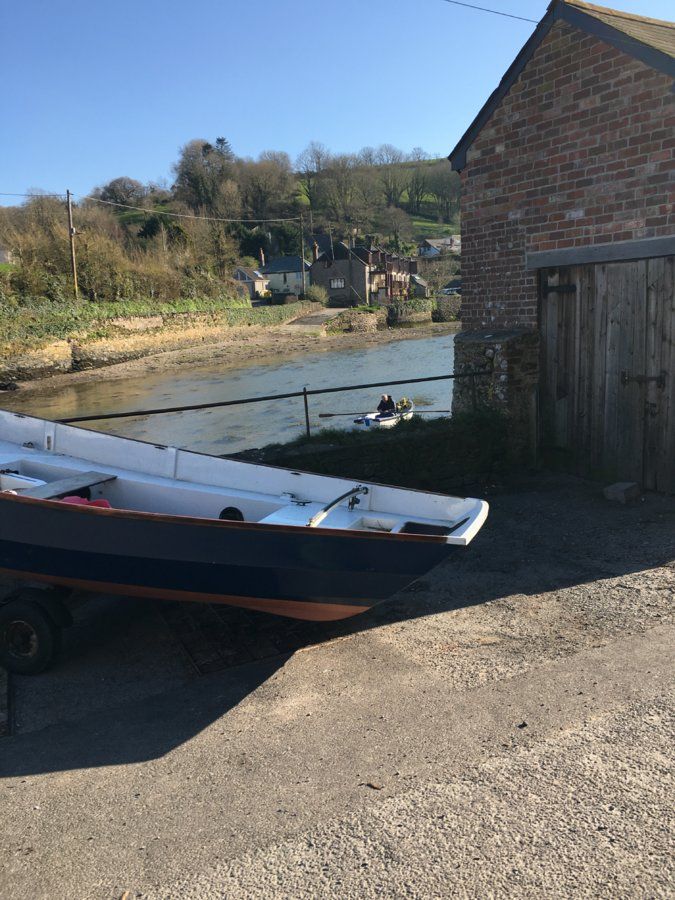 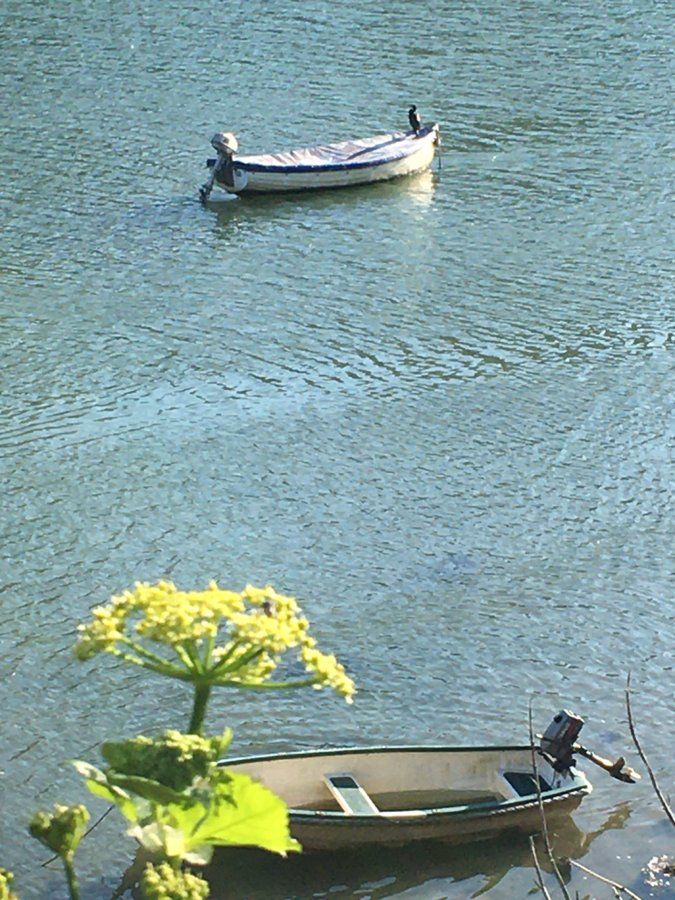 What a superb spring day. I was a bit later than usual heading out today. No meet time with pals now. It's that time of year to resurrect some of the longer rides so I aimed at Acton Green. On the way up I met Martin S coming the other way. So we had a bit of a chat at distance. I think it's going to be like this for quite a while. Over the top at Acton Green it's a nice drop to Bishops Frome and the run to Burley Gate. Ocle Pychard is an interesting name. I crossed the two Hereford roads for Mordiford to cross the Wye then on downstream to cross again at Hoarwithy. Strangely the usual gaggle of swans were absent. It's a lovely run climbing away from the river to eventually top out on the Marcle ridge. Then it's a fairly standard run back made superb by plenty of wild daffodils still in bloom. 66 solo smiles

My son was slowly going up the wall this afternoon bless him. Both kids have been dealing well with social isolation but it has been tough, so it was time for some forest bathing to decompress. We headed out next to the river towards a quiet section of forest that's criss-crossed with lots of tracks and my son led the way. Picking random tracks at will, criss-crossing this way and that and exploring. We had a great time in complete solitude just enjoying the peace and quiet before emerging next to the river and having a small snack on it's banks. Then we headed back to home, registering just over 12km's of blissful decompression. 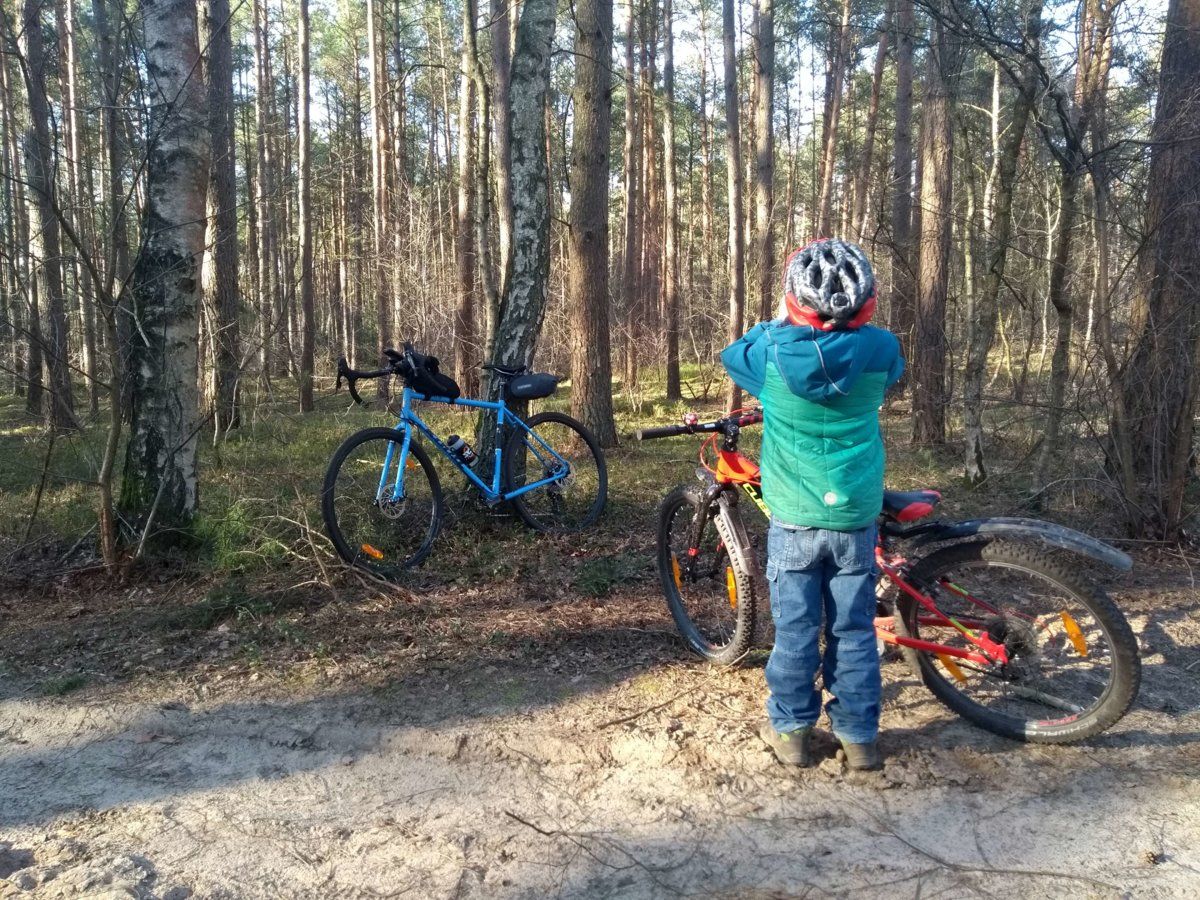 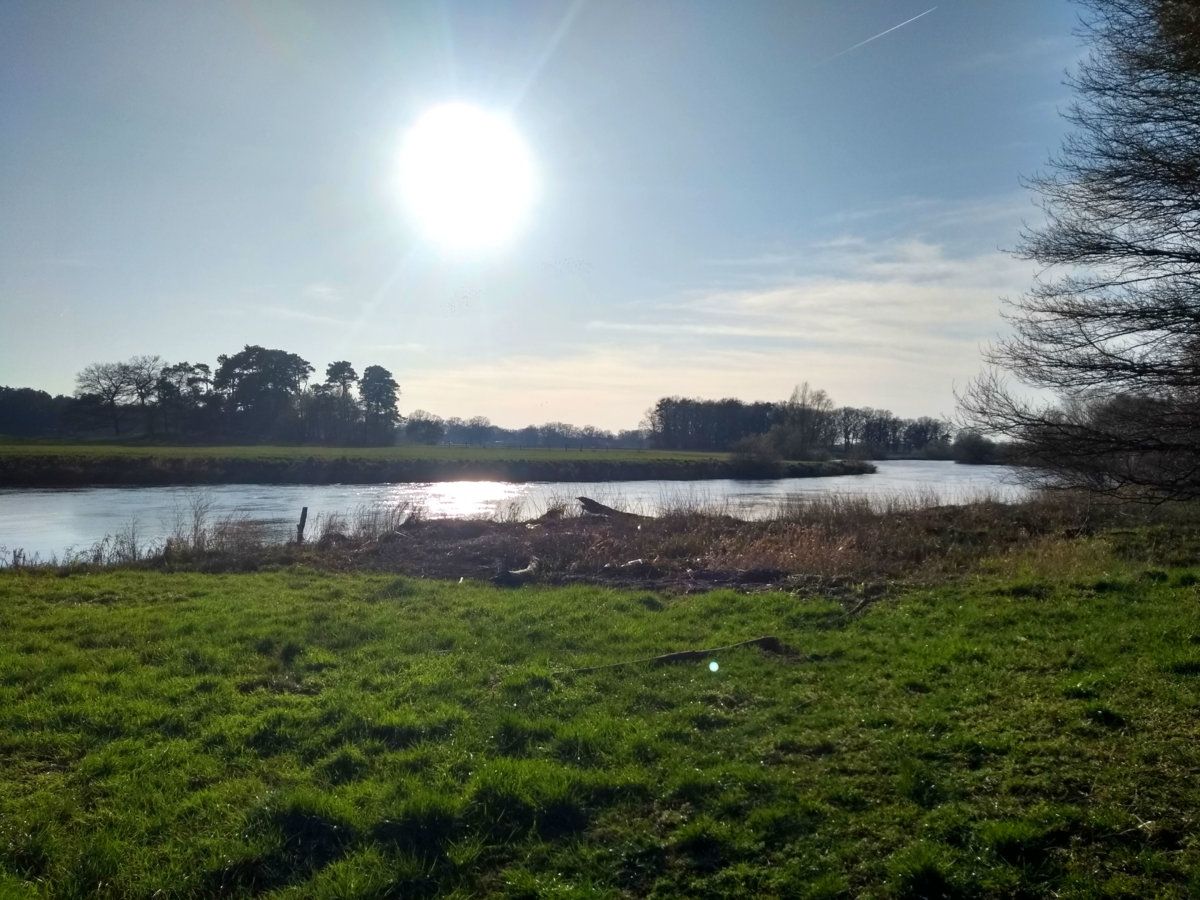 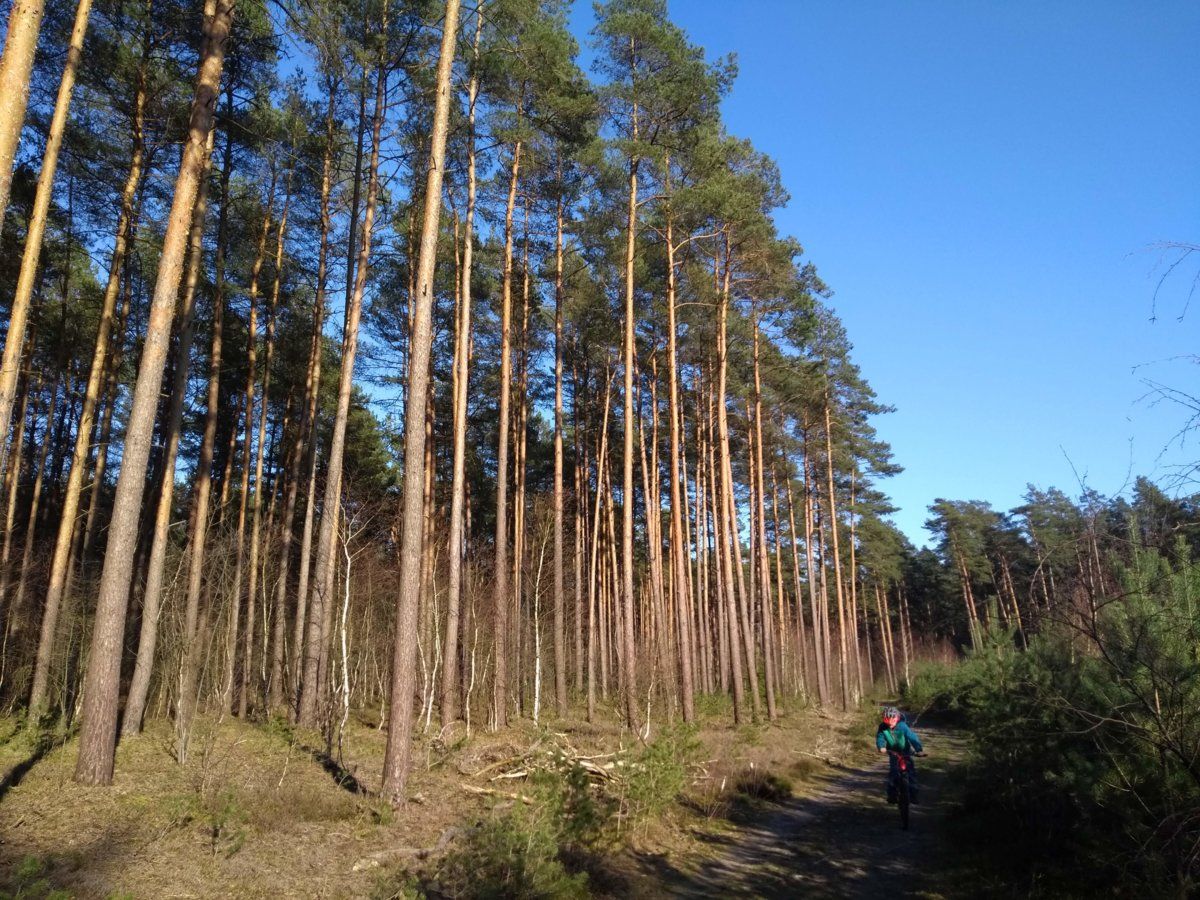 A 37k hilly leg-stretcher today in surprisingly warm sunshine.
https://www.strava.com/activities/3217018202
This is the Sidbury by-pass. 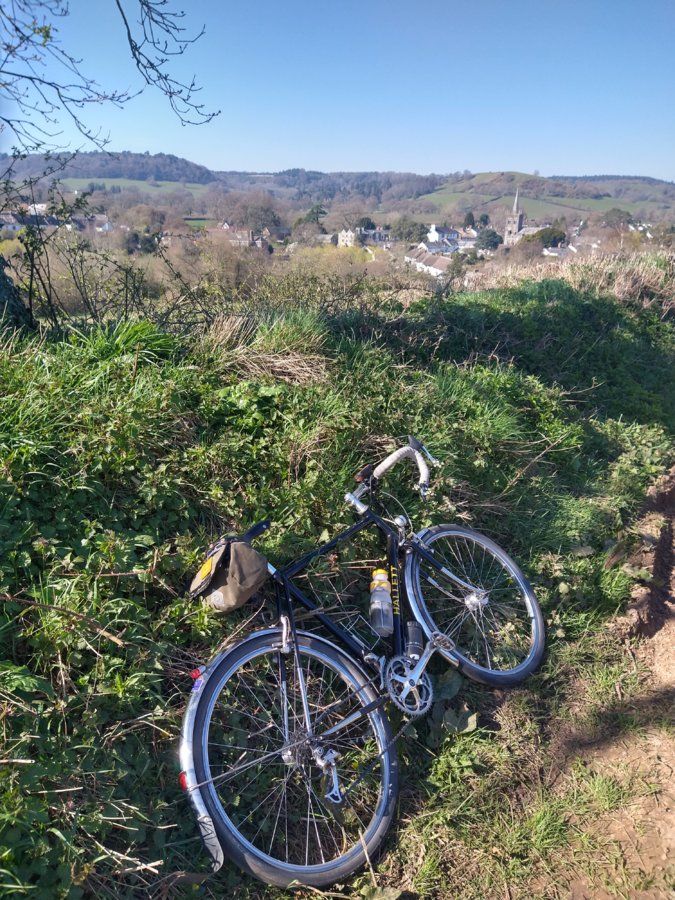 Headed out for an evening ride, after a real down day, yesterday, where I’d pretty much decided I wouldn’t ride until the restrictions were lifted, but a video chat with my boss today, where he said to me I should get out for my Mental Health’s sake, made me change my mind.

I avoided the Town as much as possible, by going straight out onto the A458 and then onto the, usually, quieter roads to Betton Abbots, Eaton Mascott, Berrington and Cound. Whilst there was virtually no traffic, I saw 10 cyclists in the first 3 miles and then on the narrowest lane, 10 runners!! All were meeting the rules, I.e maximum of 2’s but it made social distancing a little trickier than I thought it would be, on normally quiet lanes. Early dings of the bell, and I hung back until they’d moved to the side, before passing as wide as I could, meant we were just about ok.

Thankfully, after Cound, it widens out a bit, as I continued to Acton Burnell and then back along the, normally busy, but today only saw 1 car, road to Pitchford and Cantlop.

When getting back to Betton Abbots, a police van came from the Shrewsbury direction. He didn’t stop me to ask anything, though and so obviously wasn’t bothered at me being out, which made me feel a bit happier about it.