An enforced day off work - the boss phoned me yesterday and told me I was to work from home today as they'd instigated shift & roster changes in the light of the latest Goverment advice. No problem except as I've got no equipment for home working all I could do was be on call just in case. Therefore I couldn't go far from Felixstowe in the unlikely event I had to go in as an emergency so I just picked a local 20 mile loop of Levington, Nacton, Ipswich, Buckleshem & Falkenham and did it 3 times!

Another ride for me today. Just 15 miles In some 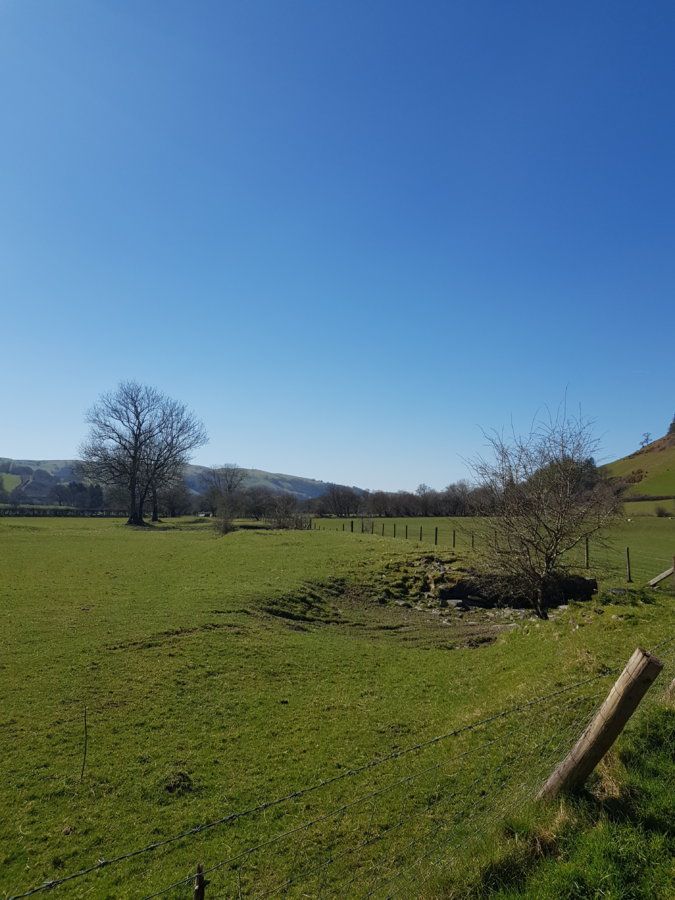 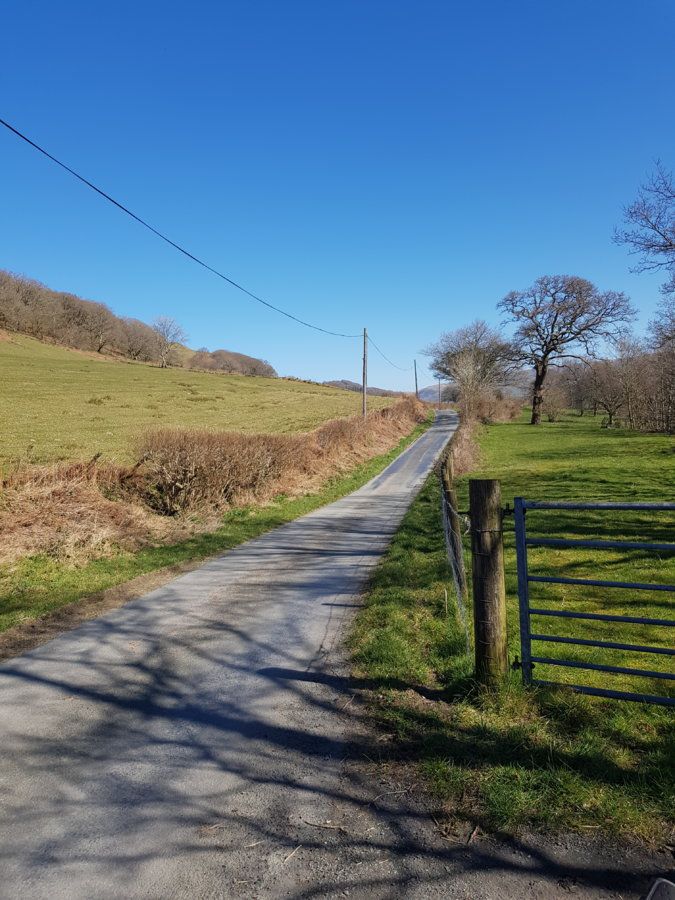 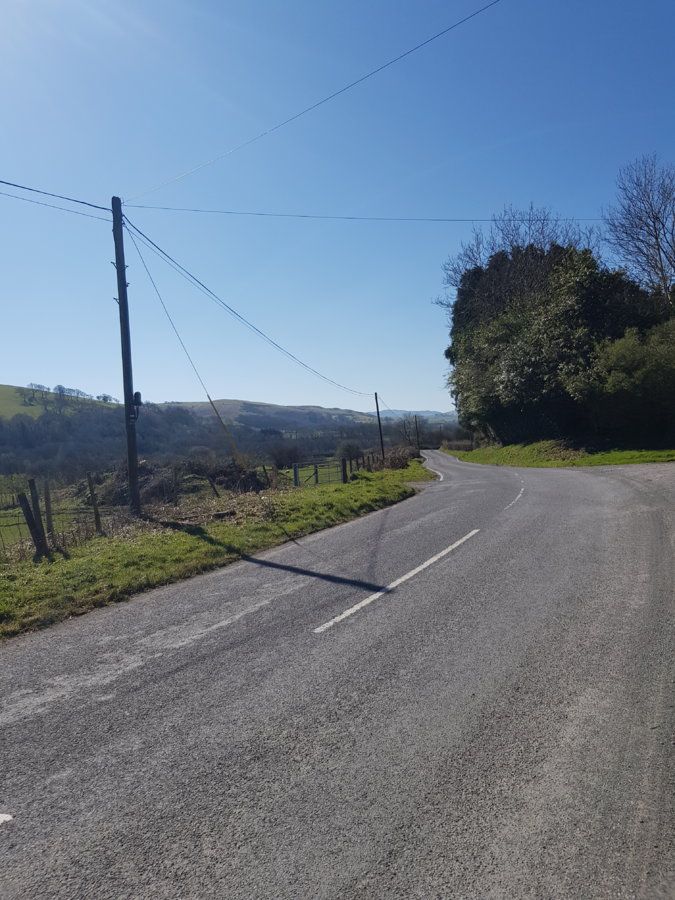 what cool weather. Lots of sun though.

4 cyclists, 5 walkers and half a dozen cars.

At long last got out for a run on the trike today. Took the car up to a small car park near Glengorm Castle on Mull and met no cars on the way out at 1000 and on the road which has a good surface passed one Glengorm car and one looking for parking to walk a nearby rough cycle track only suitable for mountain bikes. Chilly wind and the cattle herd had wandered down near the farm so no problems with them. They are peaceable highlanders but being so low down near them makes me nervous tho’ a bike is ok. Only did about 9 miles but this is my first trip out since Christmas so the hilly bits were a bit of a push. Going back home there were cars tucked into all sorts of strange places as people distanced themselves for exercise.

I’ve been riding out from home, I’m not sure driving with the bikes on the roof is an essential journey.

I'm limiting myself to one hour rides, alone or with Ms AllUphill. 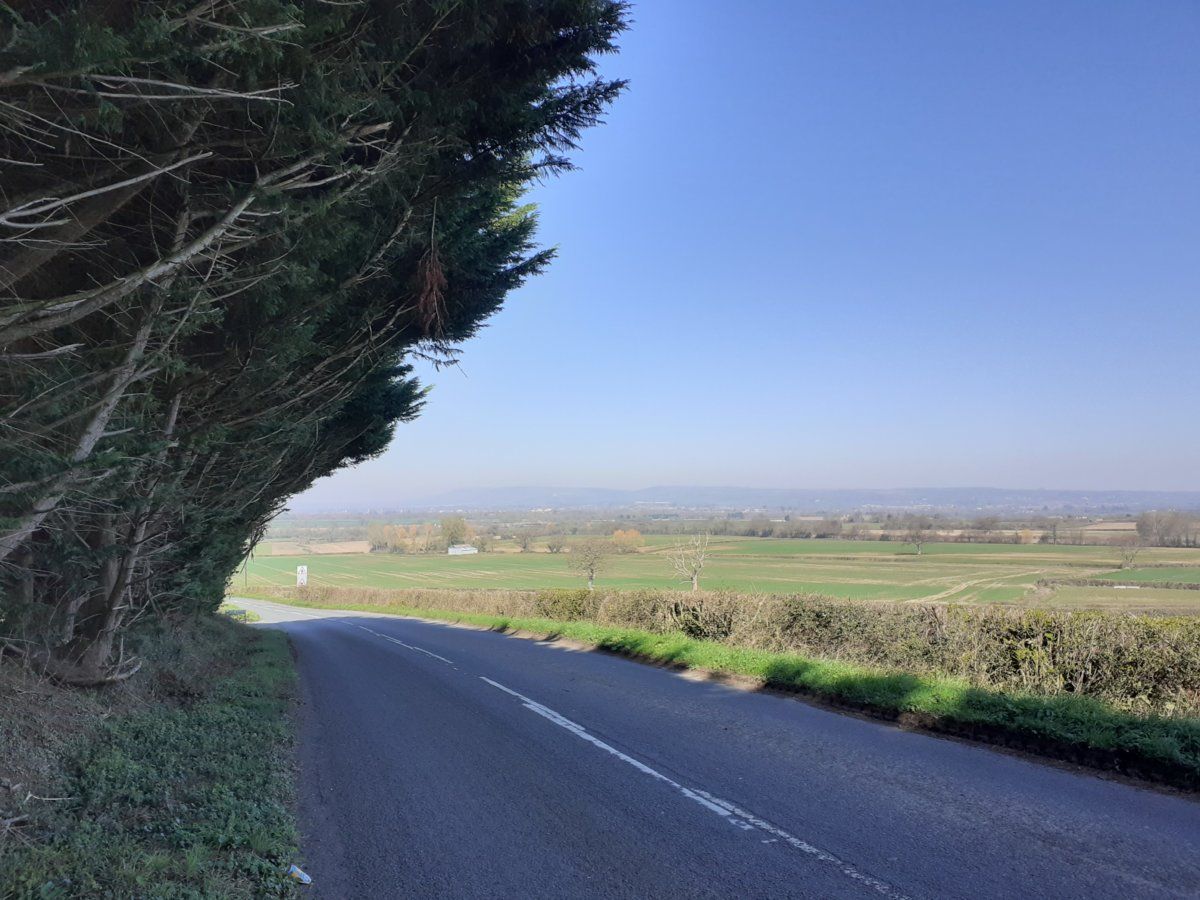 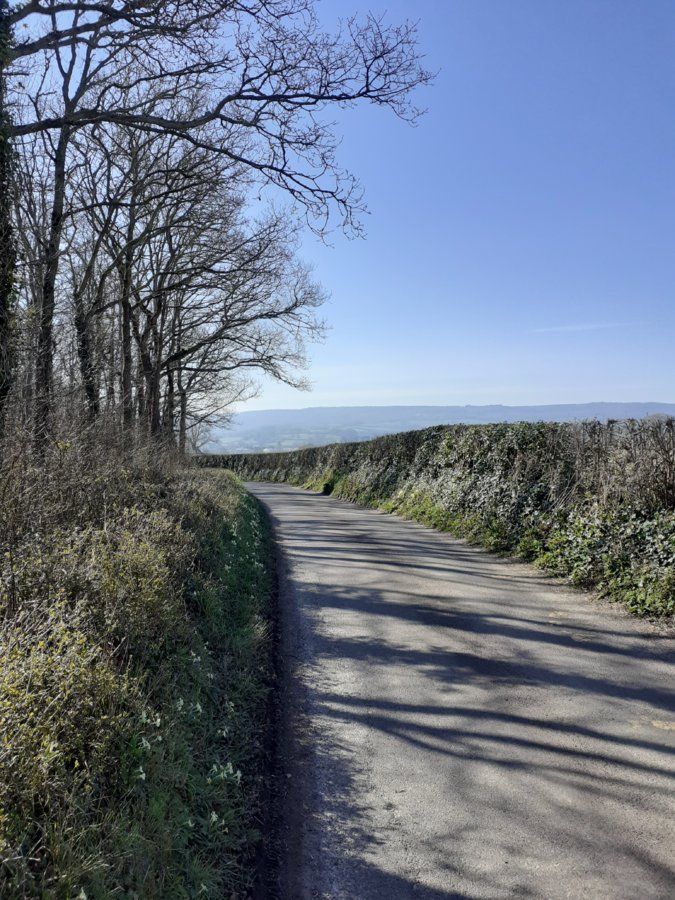 A very bright one degree out there this morning, and the promise of warmer. Lets take the fixed out to play.

A neighbour was just returning from shopping as I was about to go, eight or ten feet apart we chatted for a bit. I was asked where I was going, or ‘did I just ride wherever?’ So I recited a list of places I intended to ride through, said farewell and went. Into the depths of Holbeck and realised the list was a ride I do every now and then. Just checked, January was the last time. So thought to ride it again. The first bit after escaping from Holbeck is through Hunslet and up to John o’ Gaunts, this being the start of a few different routes.

Turn left to head towards Woodlesford station and spin down the hill at the side of it. Left turn to cross the Aire and Calder Canal, and then the Aire itself before the first of two steps up into Swillington. The second of these usually has me breathing a bit hard, but seemed easier this morning. Reached the top, the road rises all the way through Swillington, and the day was so clear I could see the Hook Moor wind turbines high above Garforth’s roof lines. And after riding around the northern edge of Garforth, then passing Park House Farm, Hook Moor is next.


And on to the gates of Lotherton Hall. A left turn here, expecting a bit of a sideways shove from what had been a tailwind. Nope, a very calm morning, I might just have been pedalling well. A very short stop, drink only, I had forgotten owt else, and then ride through Aberford to Cattle Lane. Down a bit, fields both sides of the road now, then up a bit. Mostly level till the drop to cross Cock Beck and then up to Barwick. Did I mention all the riders? Singles and pairs just about all the way around, it was a bit unusual to see an empty stretch of road in front. Encouraging.

Scholes next, and I found that big bump on the bridge again. Must keep the eyes on the road. A bit of the A64 leads to Thorner Lane, and two more lanes to the A58. Where are the roads for the numbers in between? I dunno. Anyway, the quick twiddle down Boot Hill, pass the clock and downhill again to cross the river at the edge of town takes me to the street I live on. A smile for twenty nine sunny miles on quiet roads. Cannot ask for better.

A once familiar ride 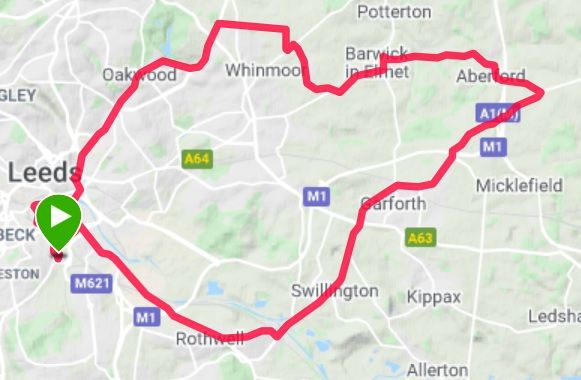 Decided to add a north loop through Tavistock to see if I could top 10 miles today.
Just outside the PO and a VW Caddy slowly runs me down. Managed to not fall over, but rear wheel (,50 miles on it) out of true enough that I had to undo the V-brake to get it to turn. Paid me on the spot what I asked for a new wheel, and I trudged the 300m back home...
Total including walk home:0.73 miles, 1.9 mph avg, 21ft of up... 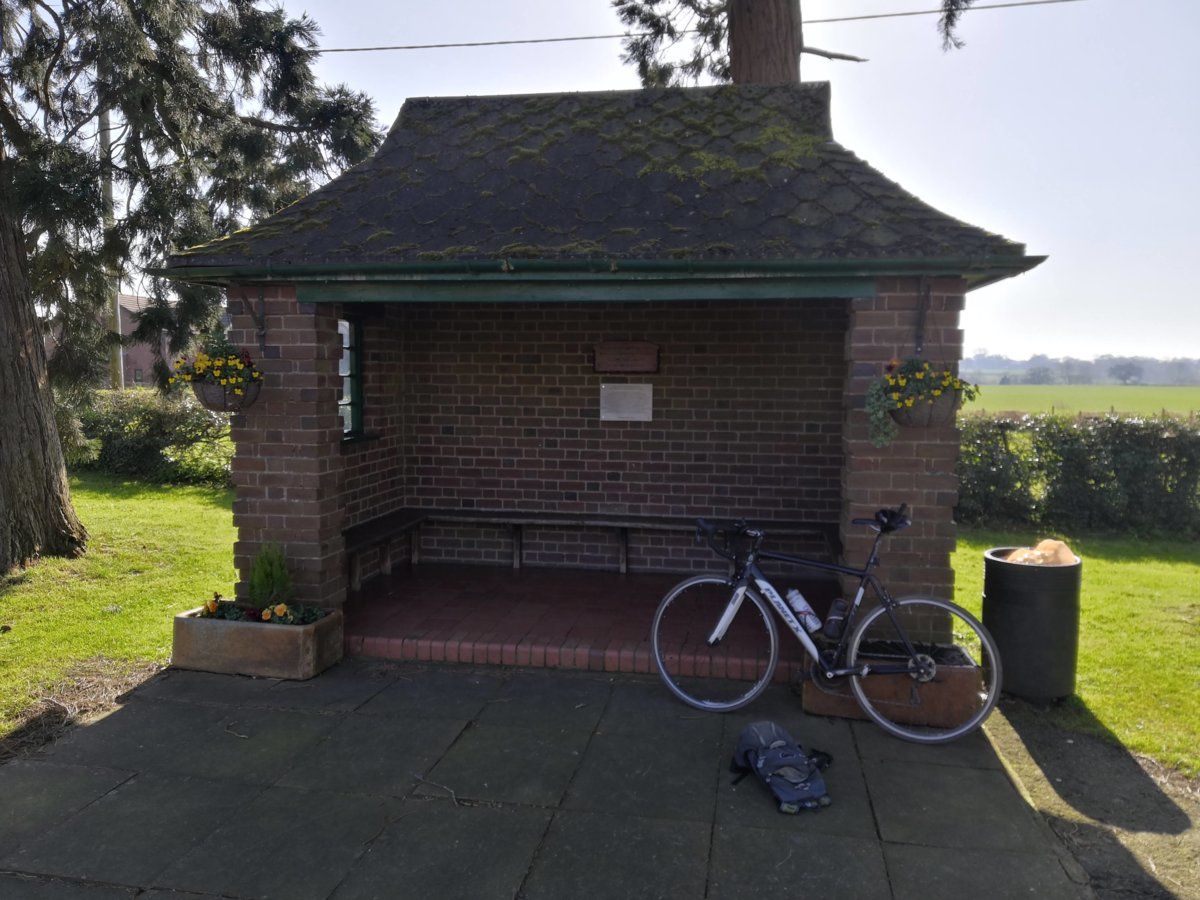 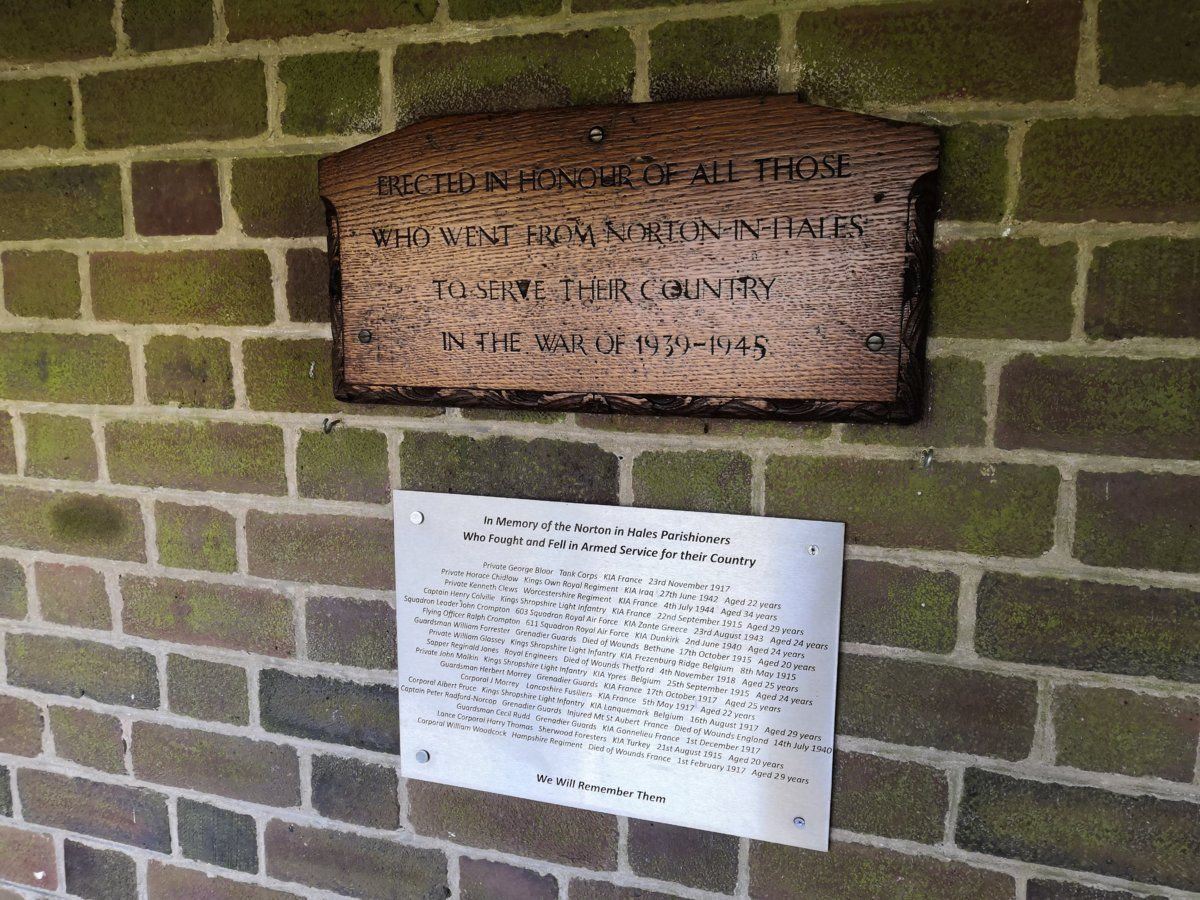 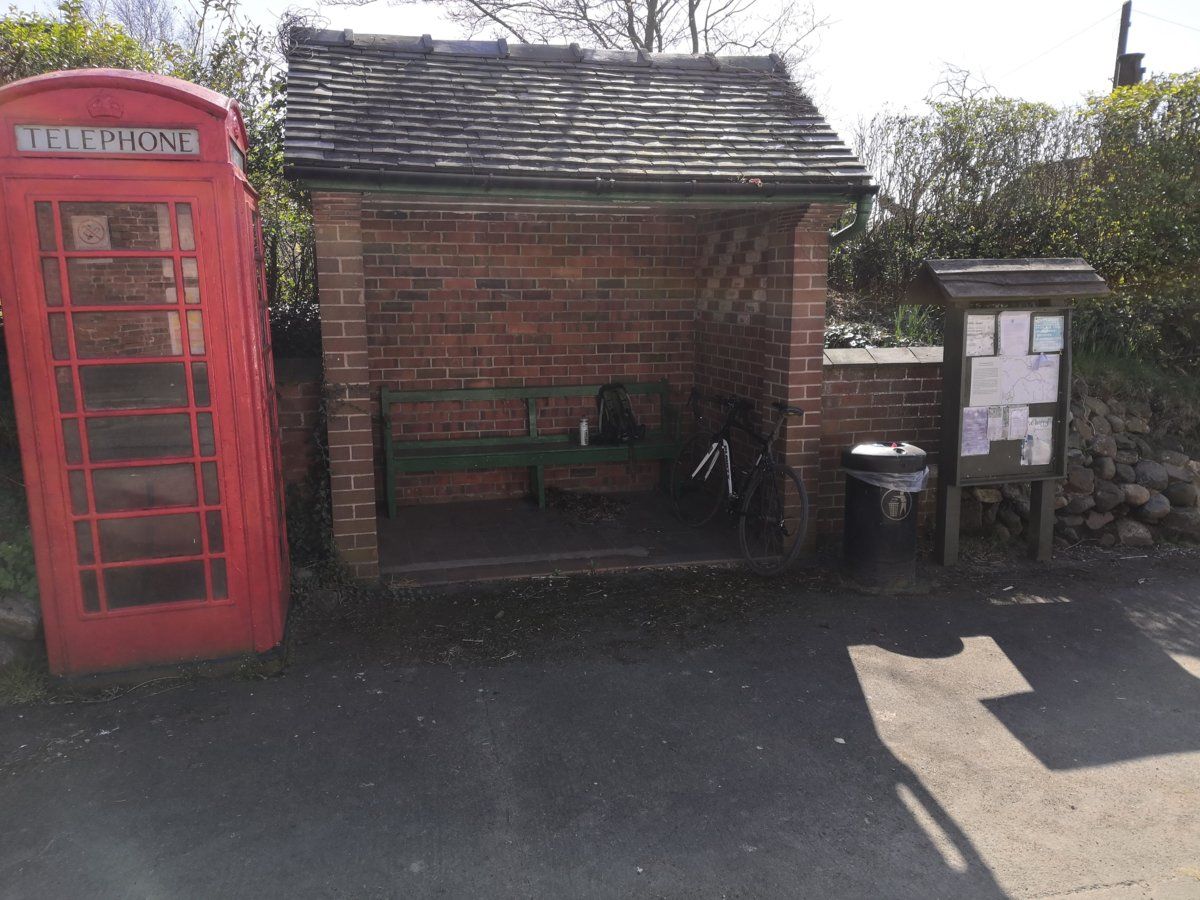 The Fragrant Mrs P and I did another 2 X Birds 1 x Stone thing, to get something we could not get yesterday, a smidge under a 20 mile loop and apart from TFMP's minimal interaction with one person in a shop we had no contact with anyone what so ever. The only photos I took are with my Go-Pro whilst in motion, didn't want to hang about. Lovely weather, a little headwind on the way out, no dick heads in cars. 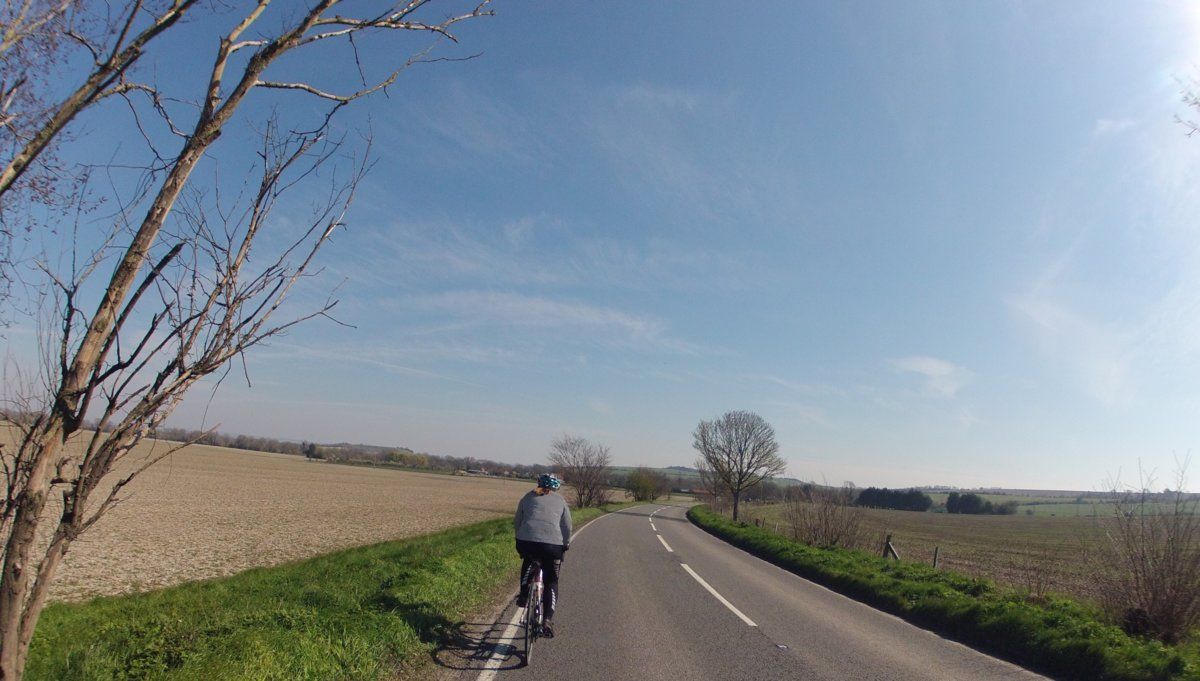 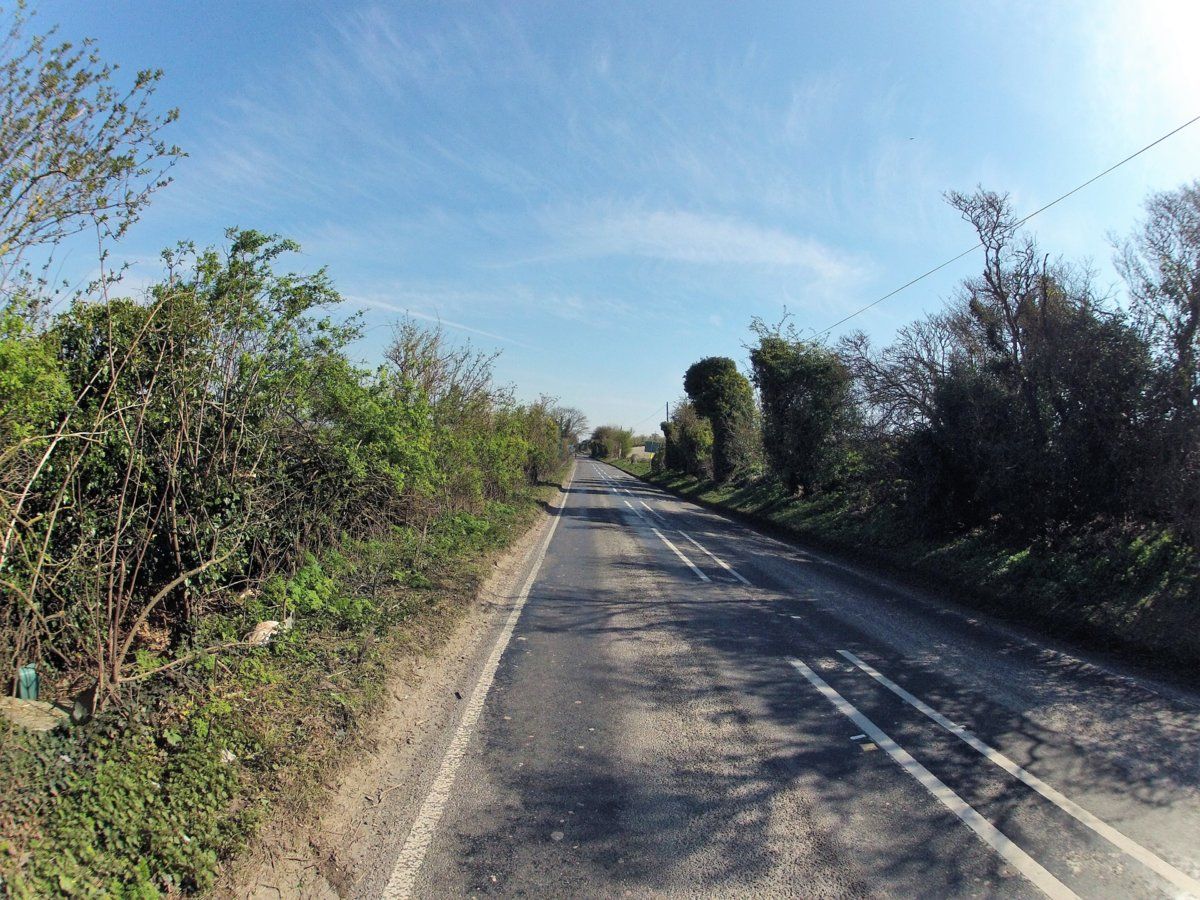 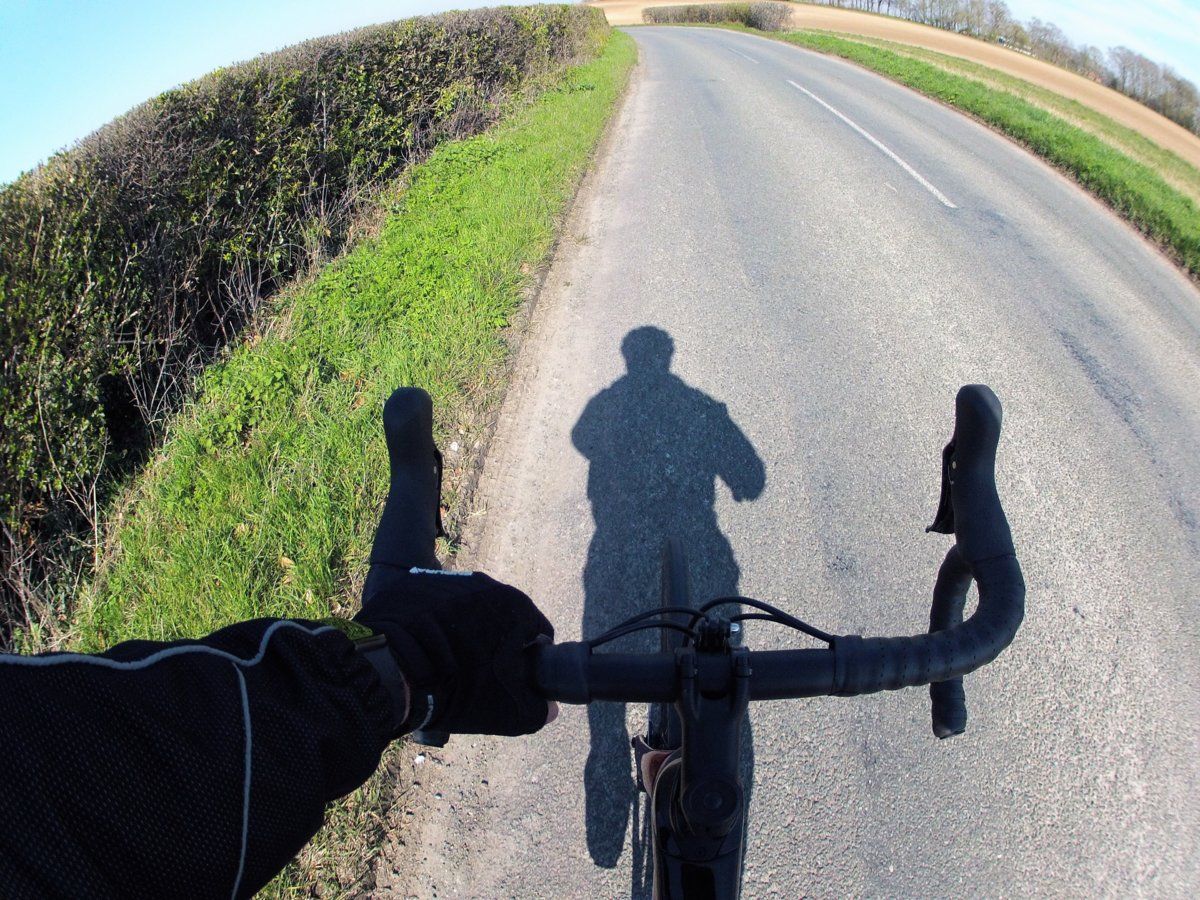 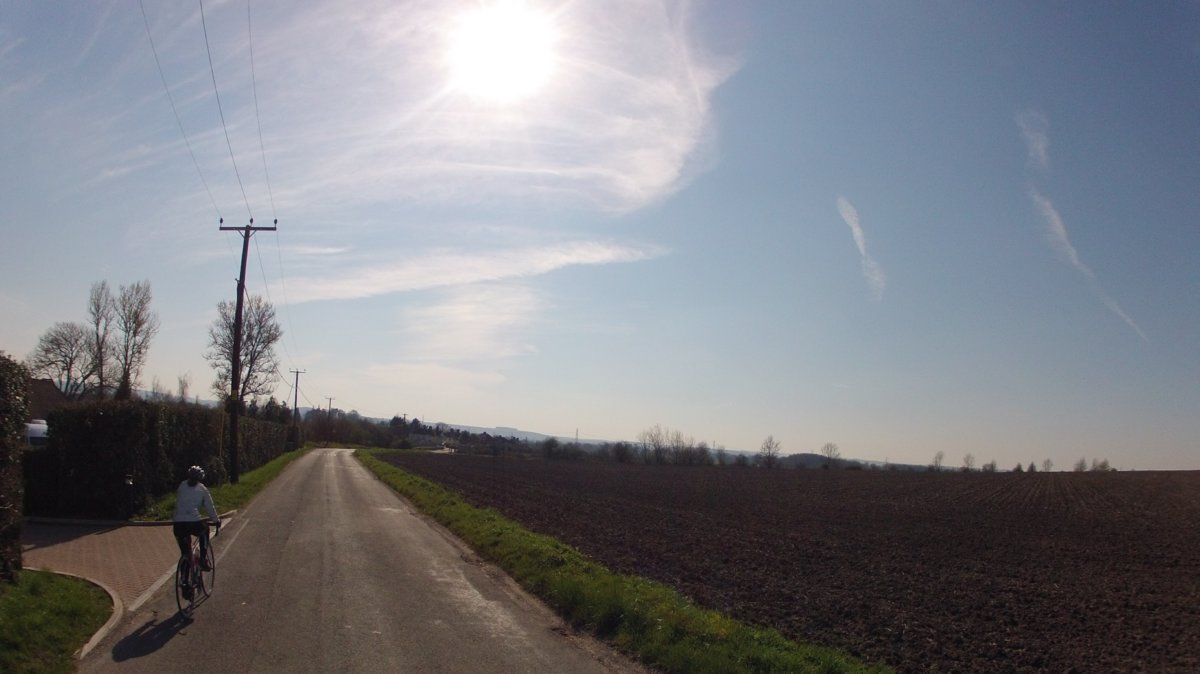 EltonFrog said:
@ianbarton your links are not working.
Click to expand...

Thanks. I think they are now.

Another late morning Boris approved bike ride – same initial route as yesterdays and the hybrid now equipped with a working Garmin after resetting it so at least I can see how fast slow I am going. Turned west to Hampsthwaite where a local resident obviously aware of cyclists habits informed me from a distance that a village shop (actually the café but I presume its now a shop or takeaway) had made some freshly baked walnut cakes. Skipped on it due to my food allergy and headed onto the climb towards Clapham Green, where just as the road kicked up more 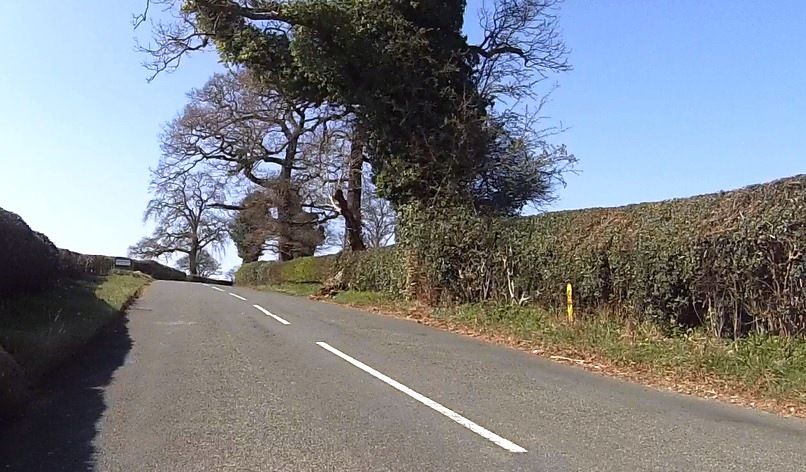 a change of gear saw me grind to a halt as the chain overshot but on turning the pedals by hand it promptly jumped back onto the cogs. So a brief walk to the lesser slope beyond and continued to find a mass of daffodils, bench, Nidderdale Area of Outstanding Natural Beauty sign and a direction sign with more arms than most.

Turned left then right and stopped to play with the rear derailleurs limit screws. An elderly couple on ebikes passed by and once I set off we seemed to have a game of wide passing cat and mouse–with the continuing climb they eventually won.Headed around Menwith Hill and across the A59 to turn east onto Penny Pot and the big mistake I had made hit me as there would be no really fast ride to up the average mph as their was a definite headwind which the nearest wind turbine at Knabbs Ridge windfarm all too clearly displayed. 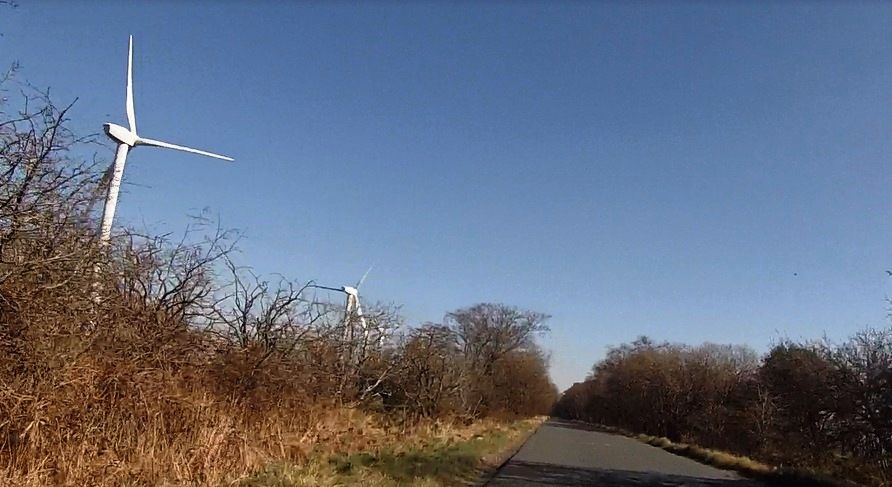 Decided to avoid the country park and instead headed north down the long decent and then up the shorter northerly climb of the Oaker Banks to pick up the outbound route. Suspect on a lighter bike the northerly climb can properly be accomplished simply from the speed gained on the down grade but on the heavy hybrid the speed fell away seemingly quicker than applying the brakes. 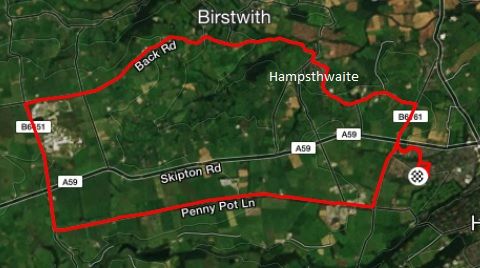 Used my hour-and-a-bit exercise furlough a little later in the day today, heading out to Saul Marina and back by a slight variation on my usual route. Yesterday's exercise was a gentle stroll down to the banks of the Severn with Mrs Donger. We both agreed we'd never seen so many people out walking, even on bank holidays and summer weekends. Everyone has been behaving well though, keeping their distance as instructed. It was nice to head out at a quieter time of day though. Returning via the A38 has been a good move both times I've ridden since the lockdown, as I've not encountered a soul on that four mile stretch.

Today has been a good day for wildlife spotting, with a beautiful woodpecker visiting our fatball hanger in the garden, and an industrious little water vole spotted in a water-filled ditch in Saul on this evening's bike ride. A very pleasant 16 miler on my number two bike while I wait for my new pedals to arrive in the post for number one bike.
Stay safe everyone. Donger

Another prescription ride. Some of the people I’ve delivered to are younger and fitter than me, but the pharmacy are flat out.... I’m doing it for them.
After the deliveries I went on an extended ride. I rode the reverse route to Darkie Hill. Going down was bloody steep, but at the bottom it was straight into 14% that didn’t really let up. Back via Membland and Bridgend. 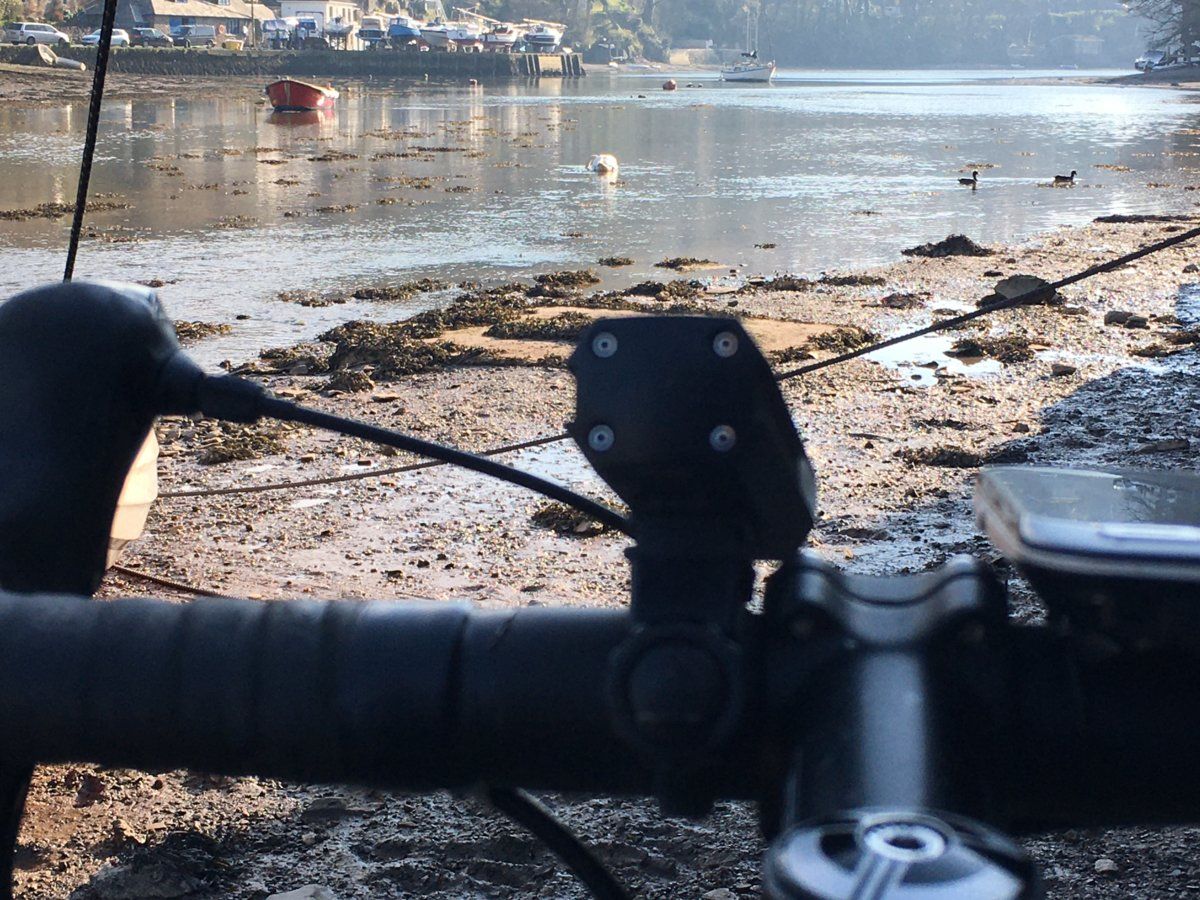 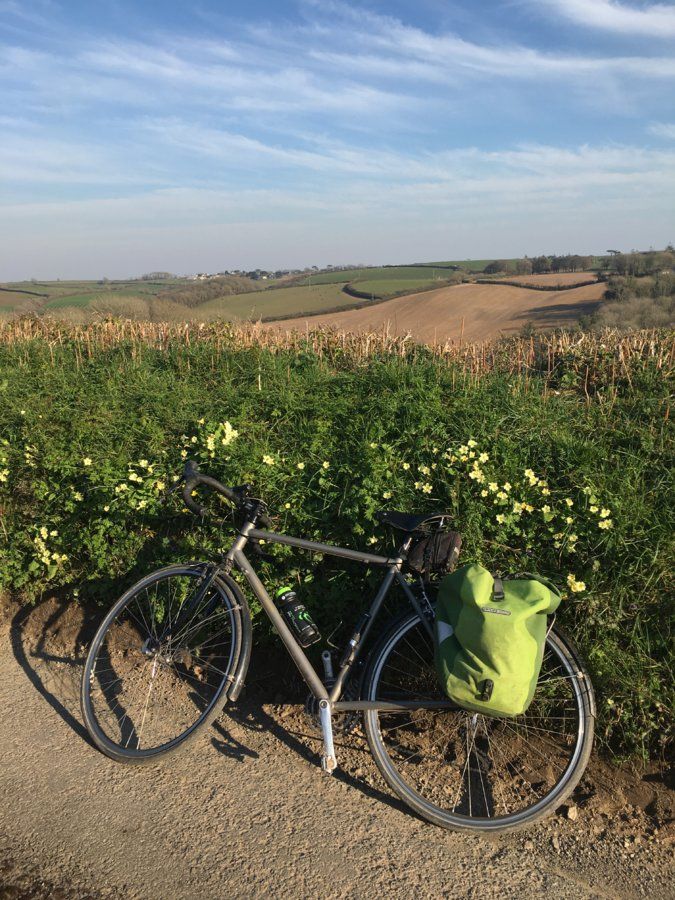 My son and I rode into Oxford today and took the road bikes, first time I’ve ridden the BMC since I bought it in back in November, gelled with it instantly mainly because the 51cms frame fits me perfectly. The potholes on the Botley road ruined part of the ride but the ride along the tow path to the small park made up for it. 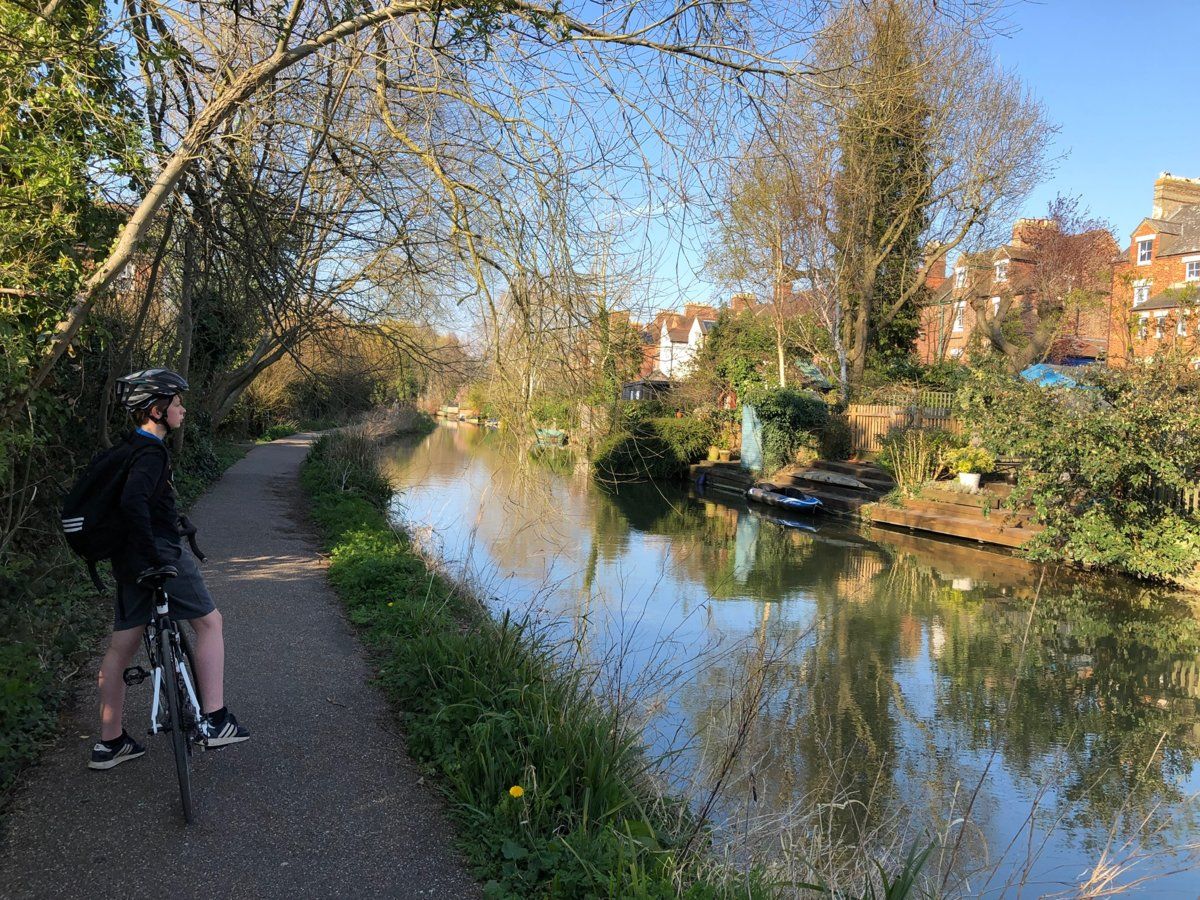 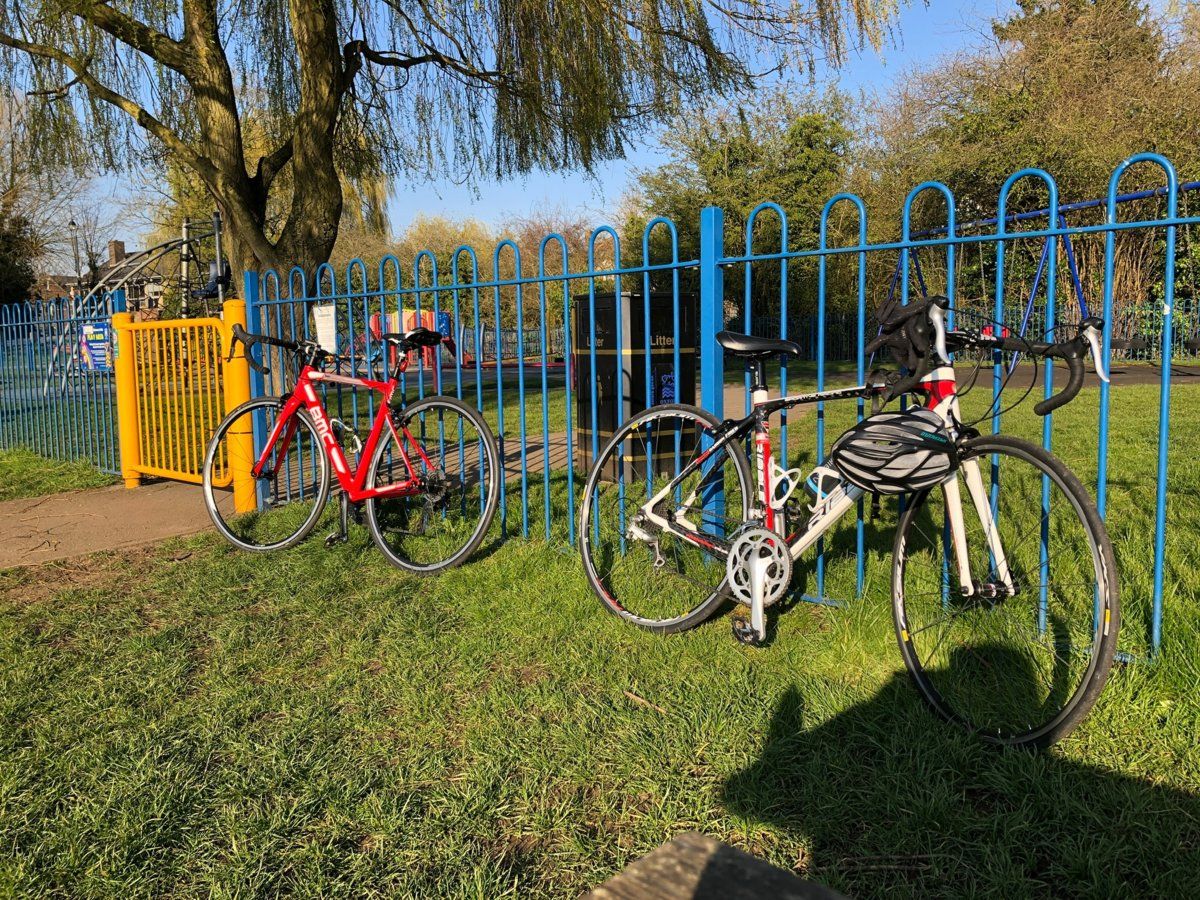 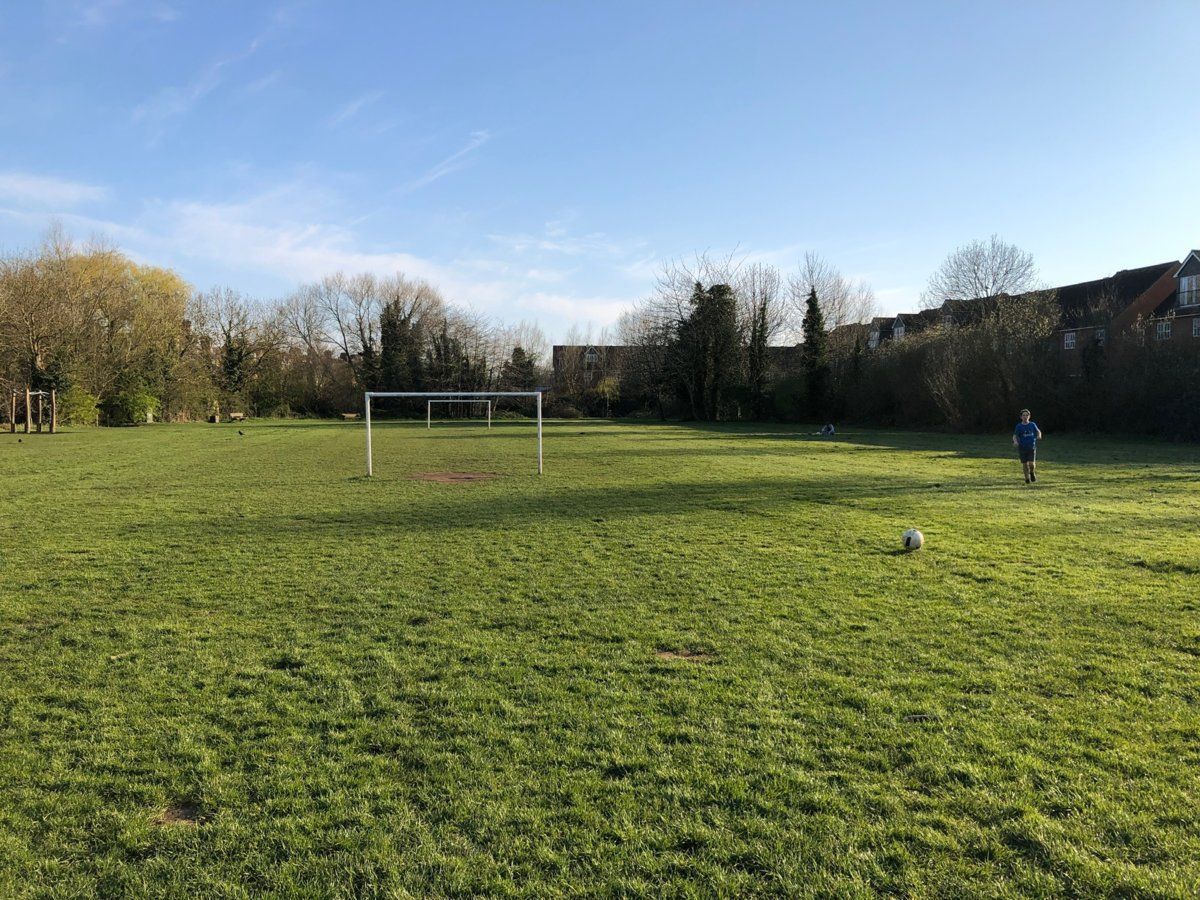 Another pleasant evening dose of approved exercise, round the short Acton Burnell route again but the opposite way round for variety.

There were fewer people out and about as I started off this time, which could have been because it was a little chillier this evening but it might be that they are starting to feel more wary of going out.

Departing the village, the roads were noticably quieter despite me being out a little earlier than last time, but they weren't completely empty. On the way to Condover something flashed as I approached a van parked in a layby...... have I just had my picture taken and why?

I doubt it would have been a good picture from inside the cab as the flash would reflect off the windsceen. Ho, hum.

The rest of the ride was pretty straightforward. The afterglow of the sunset looked fabulous and gave a nice light that faded away into dusk as I went round the loop. There was one other cyclist at Pitchford then only a handful of cars and a crop sprayer on the way through Acton Burnell. From Longnor to Condover I had the road completely to myself and then only two vehicles passed between Condover and the A49 which could hardly be called busy itself. Nearing home there were very few people still out walking. I got back just in time to take part in the applause for the NHS which I'm pleased to say was taken up with enthusiasm round the village.

Something I completely forgot to mention last time was the gears - the indexing on the RH lever had been intermittently not latching on the downshifts over the previous few rides and when I investigated it disappointingly appears to be a sealed unit. Since the only option seemed to be a new one I thought I couldn't lose anything by trying to dribble a bit of oil through the only gap I could see. Surprisingly it seems to have worked - it now clicks into every gear properly and the lever action is light and accurate like new. Pleased with that. 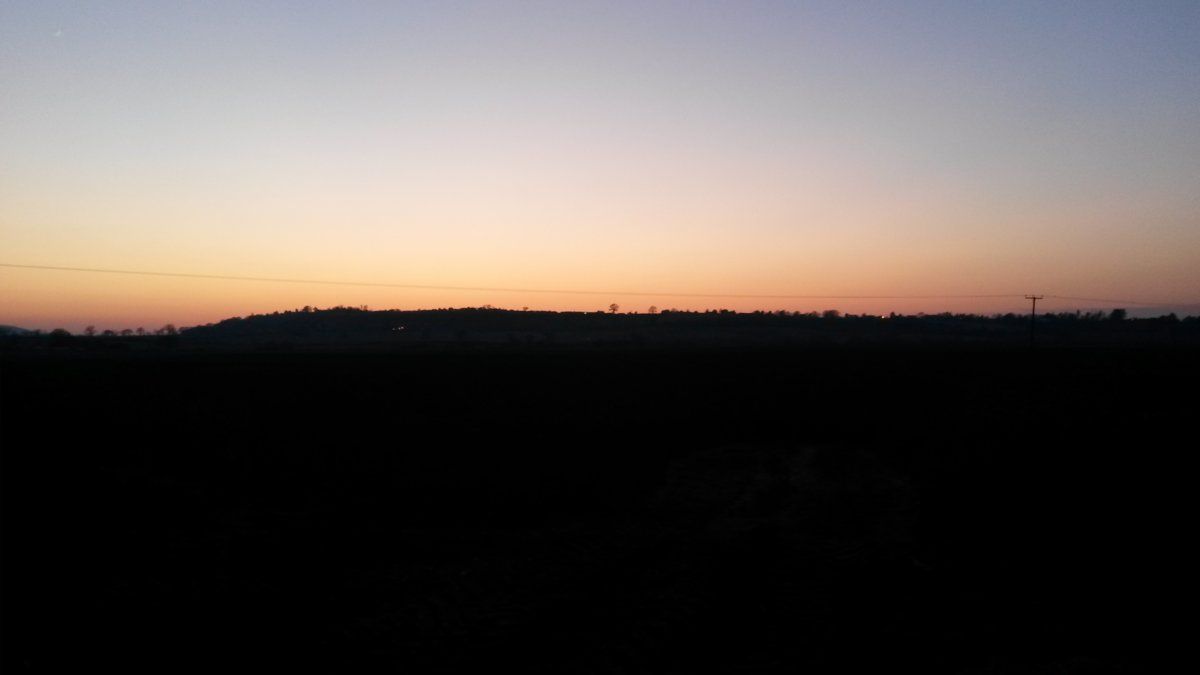 Afterglow of the sunset from just outside Condover. 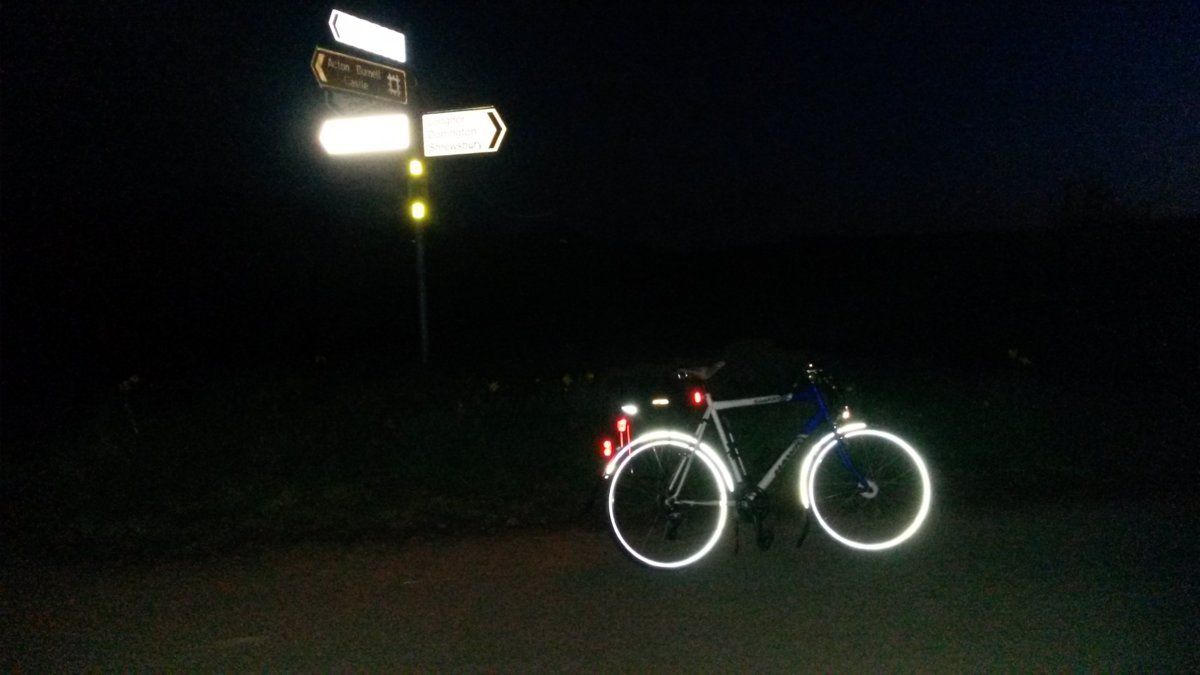 A snap at the crossroads near Longnor. I wonder if I have enough reflectives on the bike?