What is it with the wind this year - stronger today than yesterday so if the ebike could talk;
EB - Off to Sainsburys again?
Me - No
EB - Oh!.....Not been along here before... Ah! Morrisons then?
Me - No
EB - Oh!....Must be Lidl then
Me - Yes
EB - Through Calcutt and along Abbey Road I presume
Me - Yes and No, not Abbey Road, up Briggate
EB - Gulp
Me - I did charge your battery up
EB - Even so

So largely a repeat of yesterdays ride as far as the showground with a second clipped off yesterdays ebike KOM on "Worlds Full Climb", albeit still 38 seconds slower than a bike powered by Tom Pidcock.
Turned north at the showground and then north east to Calcutt , down Blands Hill over the Nidd on Low Bridge and up Briggate. Resorted to Shanks's Pony pass some TTLs close to Lidl
On the return avoided them before heading across the Nidd again, this time on High Bridge and up the hill on the A59. Turned off to join the rural part of Bilton Lane.
As I hit suburbia I turned off as the headwind was definitely worse than yesterday to take an indirect route with some shelter. Resulted in my usual errors of missing a right turn with subsequent U turn and trying to turn right onto a busy A road for a left off it when turning left and right off would have been simpler. 15.83 miles with 1340ft up.
Combined ebike outings since Monday; 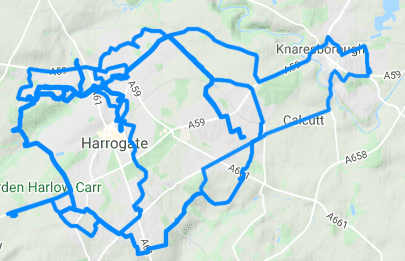 Pale Rider said:
Is there any sign of the opening of the new more cycle friendly lift at the ped tunnel?

The existing one is a bit of a squeeze with my lumpy ebike, particularly if I'm with a chum.

That, and I do fancy a go on the new one, which for the benefit of out of area readers is a funicular-style glass box.
Click to expand...

Didn’t know they were fitting a new lift ?
the escalators are still not repaired I’ve always just used them with the bike

A quiet 'trundle' with 3 others to a Cafe in Neston (Wirral) this morning. Lovely weather, a bacon butty a coffee and a good chat. Isn't that what cyclings about

I love those country lanes, which are presumably originally cart tracks so deeply eroded and covered with shady hedges that have grown into trees. A good respite on the hills on a hot sunny day.

Another great club social ride today. 42.2 miles for me, out to Berkeley then across to the Cotswold escarpment for the only climb through Stinchcombe to the "Leaf and Ground" cafe at Dursley. This was a new cafe for us to try out, and we were all quite impressed. Not many outdoor seats available, but a big long Cotswold stone wall made for adequate seating.

Sadly one of our number had to abandon on arrival at the cafe due to somehow wedging his chain between the small chainring and the frame, mangling his chain in the process. We left him at the cafe with lovely sunshine and far reaching views to the River Severn. There are worse places to break down and wait while your wife comes to fetch you in the recovery vehicle.

We really enjoyed a new and very rural descent past Cam that avoided Cam Pitch and gave more views of the Severn, before speeding home via Frocester and Whitminster. Great company, great scenery, quiet lanes. It's what it's all about for me. Loved it.

Mark pallister said:
Didn’t know they were fitting a new lift ?
the escalators are still not repaired I’ve always just used them with the bike
Click to expand...

Last time I was there you could see the glass box at the top of the escalators on the south side.

It had bits of construction type stuff inside it.

It's years behind schedule - like everything with that tunnel renovation.
G

Very windy but decided to go for it. Forecast was better for Bowland than the Dales so headed south east. Did 52 miles with 1400m of climbing. Steady climb over the trough of Bowland then down to Dunsop Bridge, was going to stop but the cafe was reduced to just a take away cabin with big queue. Carried on to Newton, then SW over Newton fell which was bigger, steeper (24% in places) and windier than anticipated. Just made it without stopping! Then down to Chipping to find my usual cafe closed and for sale, fortunately the country store has a good selection and serves coffee. Nearly didn’t get in as I got stuck in a procession of 30 tractors, seems it was a YFC, not a demonstration. Staggered back home shattered but happy. 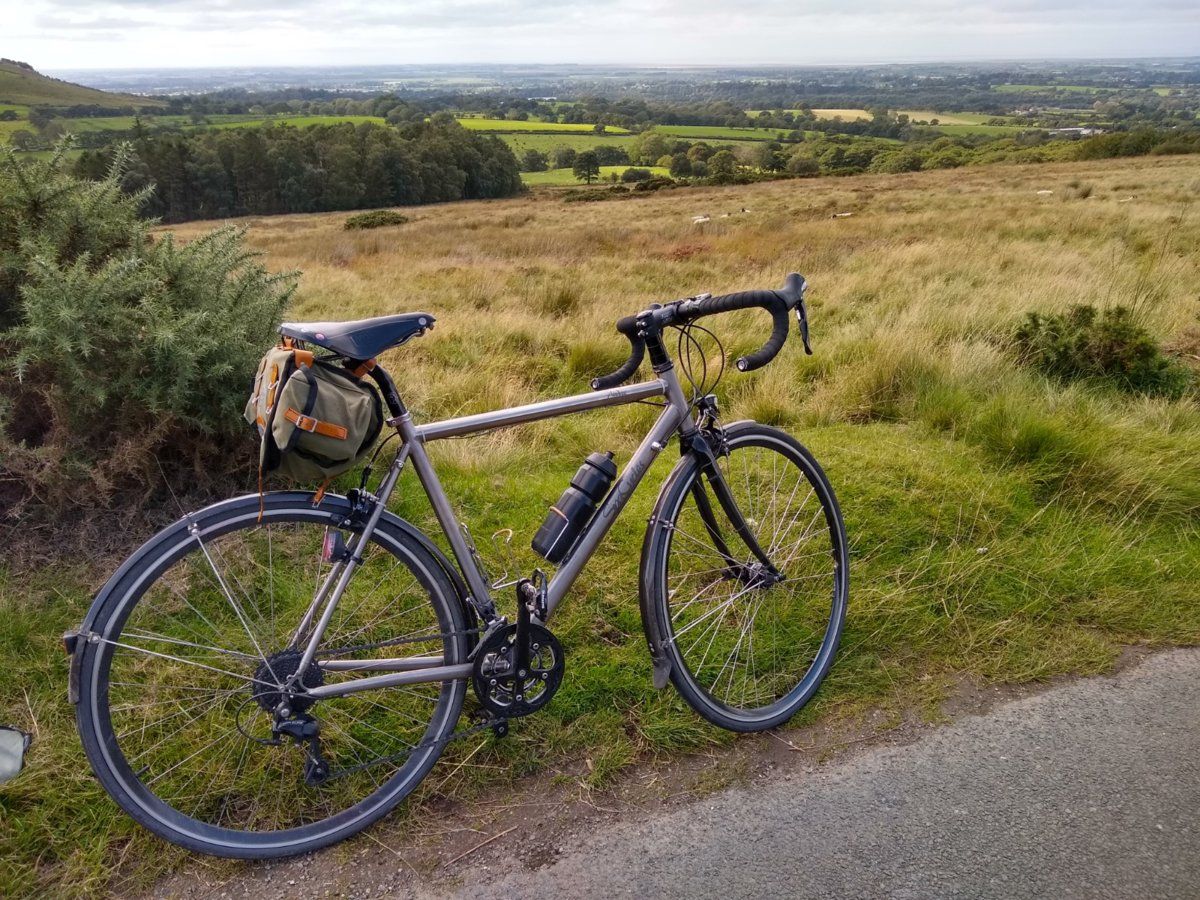 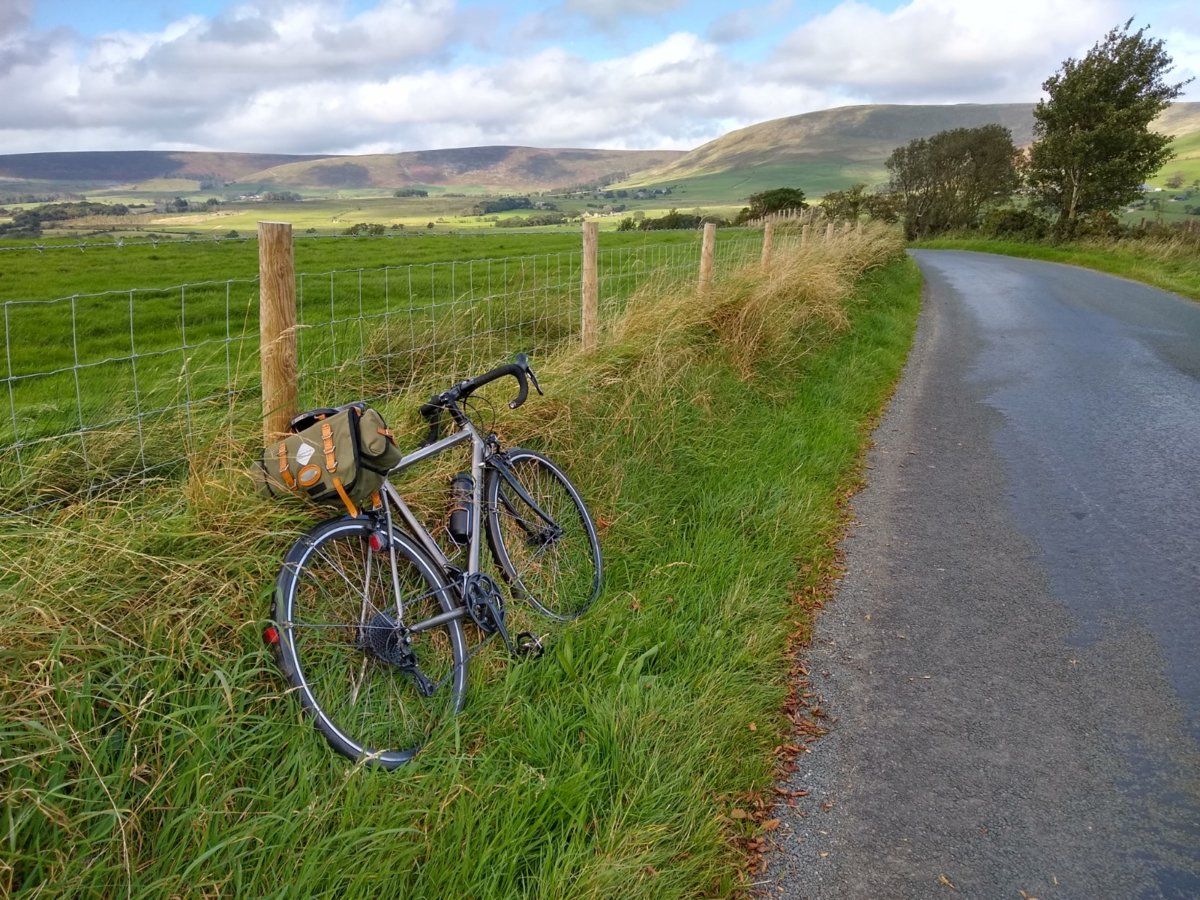 Andy in Germany said:
Finally made it, 100km.

off to make the imperial ton before you post ?

Couldn't get out until after lunch, but what a fantastic afternoon!

100k and 2000m climbing round the Peaks. No descriptions, just pics.

Today's was another informal Cc ride to destination Nice Pie . Planned route was 30 miles as I wanted to complete a metric century I was out the door early for some extra miles . Did my normal route out to St Bernards Abbey but coming down Swanimote rd I went left at the crossroads on to Warren lane which I had never riden before and it was lovely a nice quite gem . Rejoined my normal route at Belton heading back down Charley rd was my first feel of the wind stronger than I thought . Got to the meeting point at Quorn just on time I could see @Supersuperleeds talking to @tallliman who wasn't in cycling gear . A quick chat and he confirmed he wasn't feeling great so wouldn't be joining us but had come to see us off . We were soon joined by @Noodle Legs so after a quick catch up the 3 of us set off . Off through Barrow ,Prestwold ,Wymeswold chatting away and we worked out the last time the 3 of us rode together was coming back from the UCI world champs in Harrogate a year ago . Up the climb of Narrow lane and onto Nice pie . Coffee and sausage or bacon sandwichs were consumed as we're leaving bumped into a mate just heading into the cafe so another quick catch up and were on are way to face the headwind home . Up the Wreake valley where we did a couple of deadend roads so @Noodle Legs could grab a couple of velo viewer squares as he's a bit behind the rest of us . Into Rothley at the crossroads we all headed different ways . All 3 of us completed a metric century 75 miles for @Supersuperleeds ,68 for me and 65 for @noodlelegs and great ride in great company . We will try again next month to get the four of us together

what a lovely day , took my time enjoying the day , if it wasnt for a Customer coming to collect something from me . i may have kept going, guess we wont have many more like this, we can hope ,

Back to Knowsley for the second of three track sessions with my son's team plus a stack of guest riders / 2021 team members: https://www.strava.com/activities/4054899749 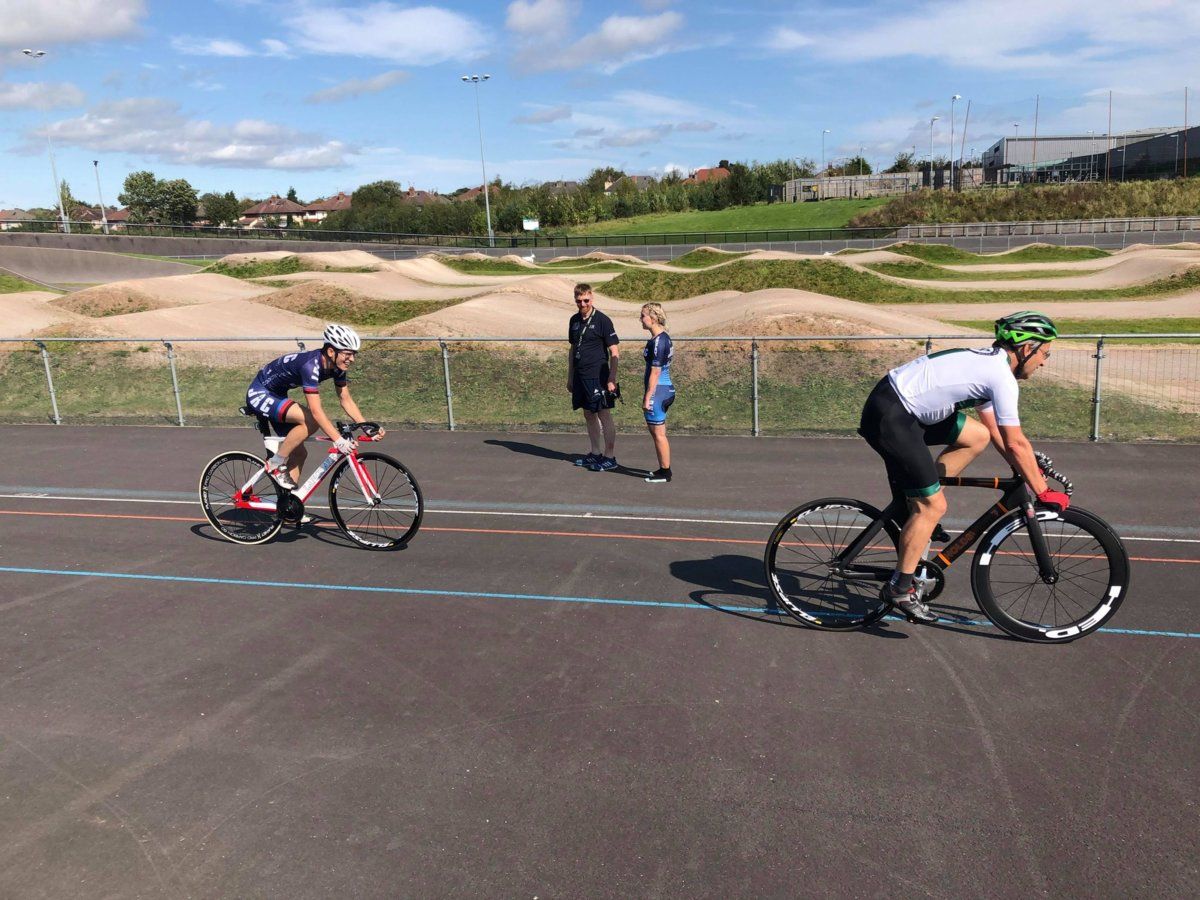 No other photos as almost all were under 18.

A warm and bright start to the day, the weather that is. Things seemed to be slow and awkward this morning, took about three hours to leave the house. Still, no problem. Took the geared bike, the Bob Jackson it had better be now, I had decided to ride to Harrogate in a fairly erratic manner.

Leaving Leeds, same old same old, Oakwood and Slaid Hill. Quite a breeze helping me on my way, Wike Ridge Lane was quickly ridden, even the climb out of East Keswick seemed faster than the usual crawl. Linton next and bad navigation. Reached the T junction and turned left, brain in neutral. Half a mile on I realised this was not the road I had intended to use. Pedalling closer to Sicklinghall every minute. Instead of Spofforth.

Then I trusted to memory. At the bottom of the village is a right turn onto Stockeld Lane. Or there was. So I kept going and yes the lane was there. After the first few hundred yards there was a gate with a walkway round it. Uphill gravel surfaced riding is what I bought the Spa for. Anyway, one more gate and a couple of cattle grids later I am on the road to Spofforth at last. It was busy. All the way to Harrogate it was busy. Never mind, family visit accomplished, time to ride home.

Knaresborough first, lets ride along the riverside road. And it was crowded, as guessed. The centre would have been as bad, I told myself, and uphill too. Reach the Wetherby Road, turn right, next is Little Ribston. A series of bends bordered by nice houses. North and Kirk Deighton and then Wetherby. The A58 felt like a good choice of road, and reaching Bardsey I changed my mind. Up Rigton Bank, by that was steep today. But it takes me to the top of the world road, AKA Milner Lane, and the ride through Thorner, again!! and the climb of Sandhills.

That is almost it, just wheee!!! down Boot Hill and the last five miles pass under thetyres speedily indeed. Front door in sight, grin on mug, and 52 miles says the garthing. With upness reaching over 3000 feet too! Not surprised I am tired.

No video yet, maybe next week. Still the map and stuff though . . . 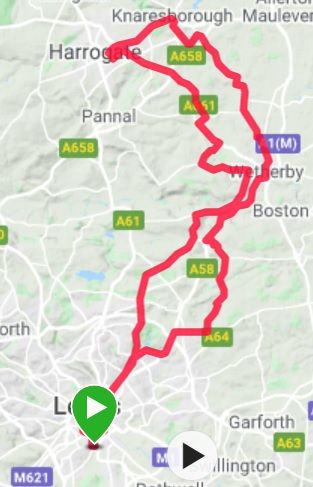 All above sea level, and it felt like it was!

Another sunny morning but a bit windy, started off towards Whixall where they are having a scarecrow competition with lots of scarecrows in gardens, farms and even climbing up the outside of one house. Carried on through to Alkington with a short wait to cross the canal over the swing bridge while a boat passed, back to Hollinswood, Coton, Abbeygreen, Waterloo, Edstaston, Ryebank through Horton to the Ellesmere Road to Loppington where the wind was much stronger. I decided to go to Brown Heath, English Frankton, Pikes End then through the woods to Lyneal, Welshampton, Hampton Bank, Northwood and home. Lots of people out and about today and not much traffic. 26.5 miles @15.8mph. 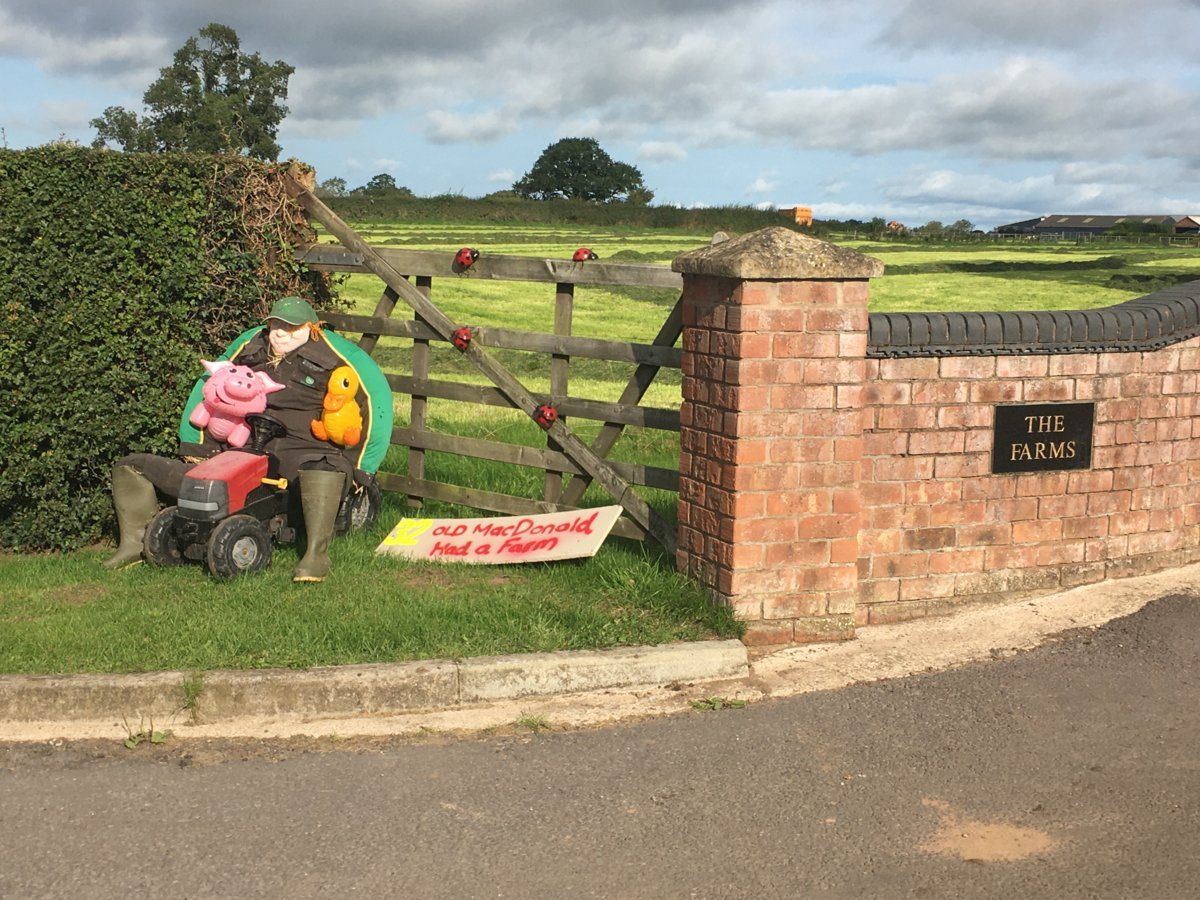