AndreaJ said:
I must admit I have had better ideas although it wasn’t that bad when I left!
Click to expand...

Still wish I had ventured out

Grant Fondo said:
Still wish I had ventured out

I tried that 'venturing out' this morning. Four miles later I was back home.

Old jon said:
I tried that 'venturing out' this morning. Four miles later I was back home.
Click to expand...

My short trip the other day was of this nature! Bloomin' brass monkeys

Old jon said:
I tried that 'venturing out' this morning. Four miles later I was back home.
Click to expand...

I ventured out walking the dog this morning. After about a quarter of a mile, even though we were sheltered by the wood he sat down and refused to go any further.

Sun shining, clear skies, bloody freezing !
Set off before 0800hrs from Sprotbrough Doncaster following the Greenway to Toll Bar then the CTC route out to Braithwaite car park along the canal.

The Greenway has received a layer of tarmac over the last 6 months. 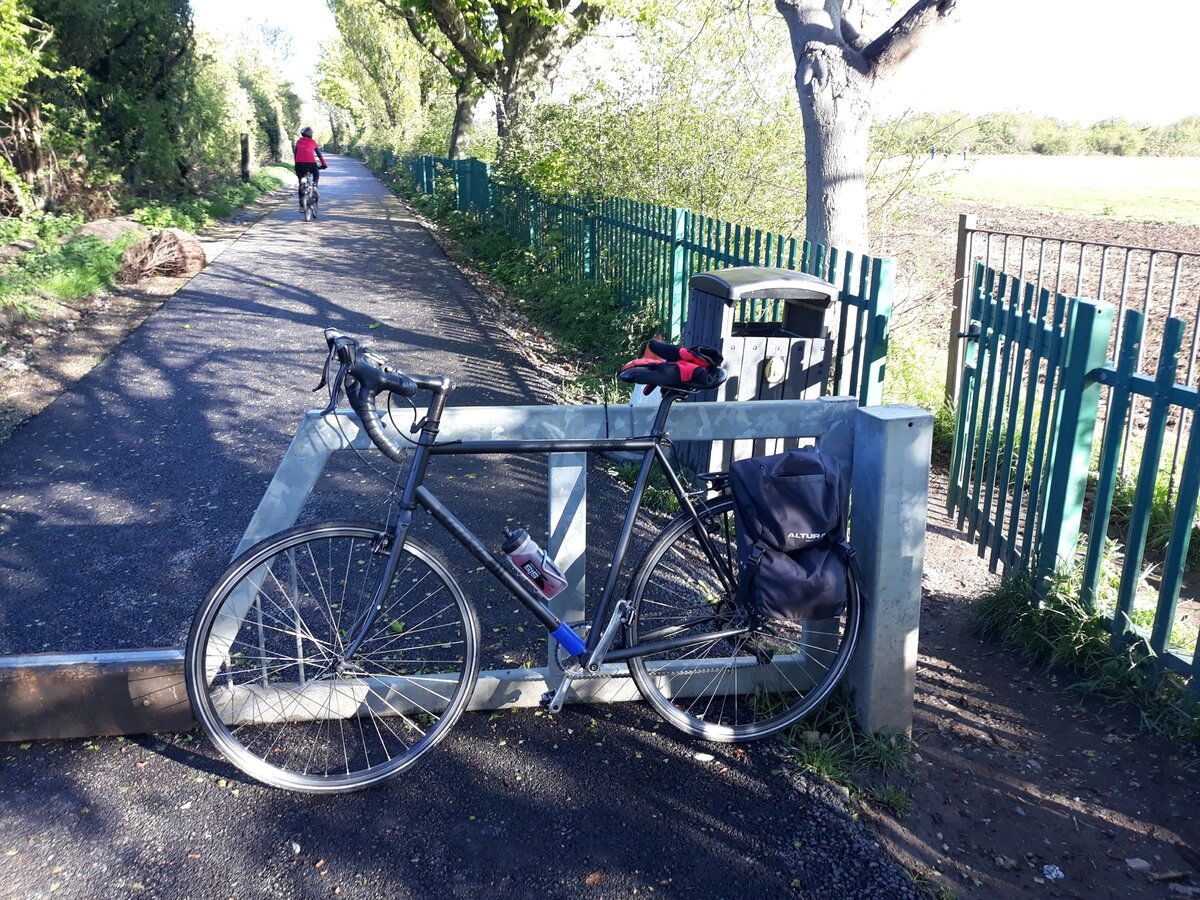 The fully manual, watch out for the trains, not very level crossing. 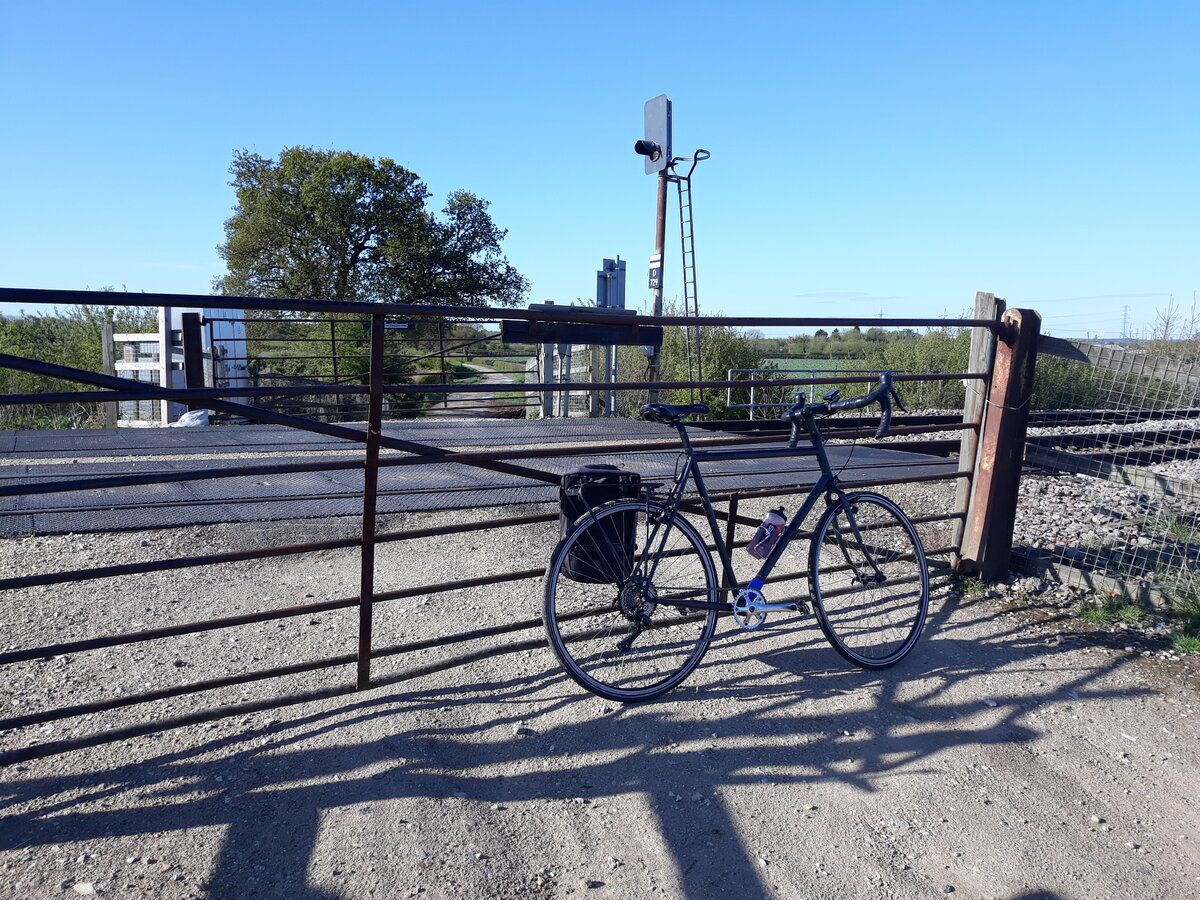 Another view of the canal lift bridge at Braithwaite car park. If starting from home or Doncaster this is my “turn”. I often drive here to start my circular rides on the Doncaster plain, to Selby, York, "Tour De Power Stations" .. etc. 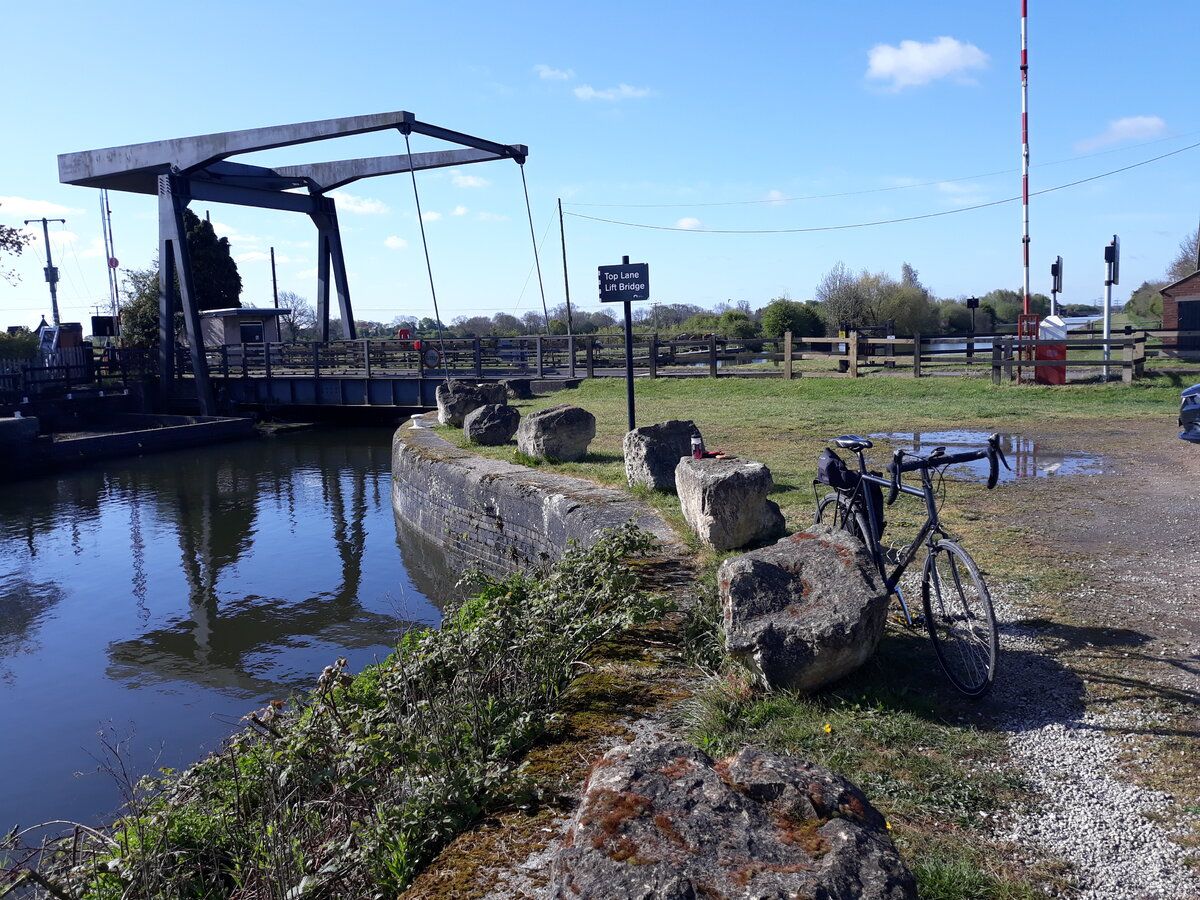 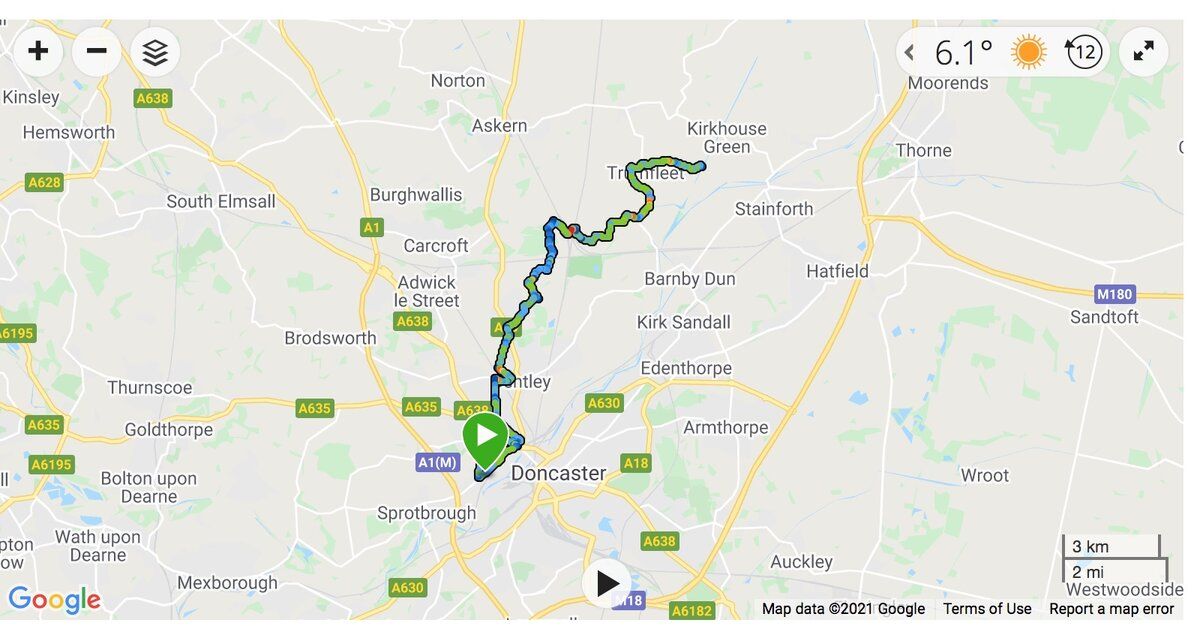 Another very short ride...P fairy and tyre damage. Edit: front tyre! Cannot remember the last time, or even if there was ever a time, when I've had a front flat before... 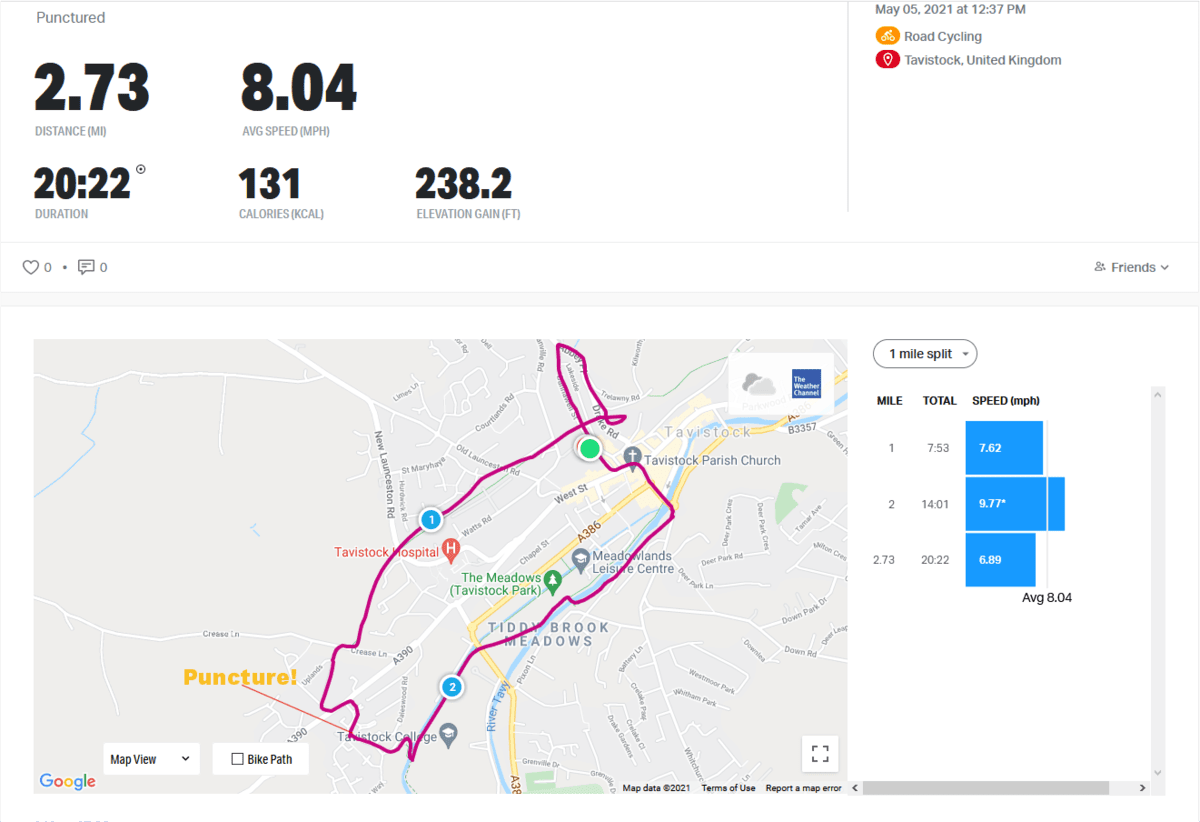 Nothing inside the tyre, and only after fitting a new tube did it dawn on me that the outside of the tyre was damaged, although I don't think this caused the flat. Tyre has done a fair few miles on the crap surfaces I usually ride over, so not unreasonable.
Here's the damage after gentle re-inflation, just enough to get me home. It had started to bulge more by the time I'd returned and got changed. Escaped Derby and headed west . At the village of Sutton I met a friend /fellow cyclist coming the other way ,we passed a few minutes remembering past rides etc . I continued to the Villages of Foston and Sudbury . Doveridge was reached , here I made a point of looking at some items of interest to me .
This lovely old Elizabethan farmhouse is the oldest house in the village . It dates back to 1600 according to a history of the village blog on the net . 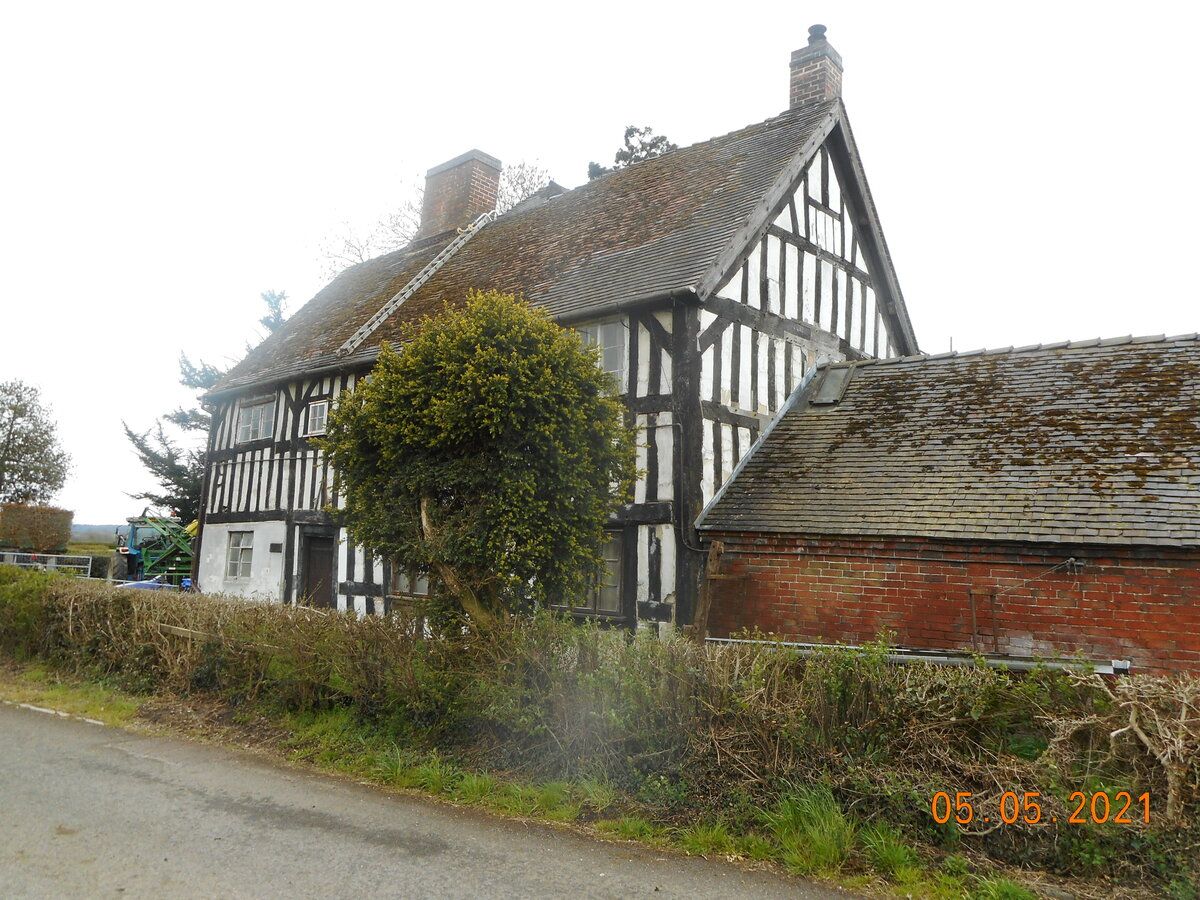 The real gem is its venerable yew tree which is said to be 1.400 years old! it is the 2nd oldest yew in the country . 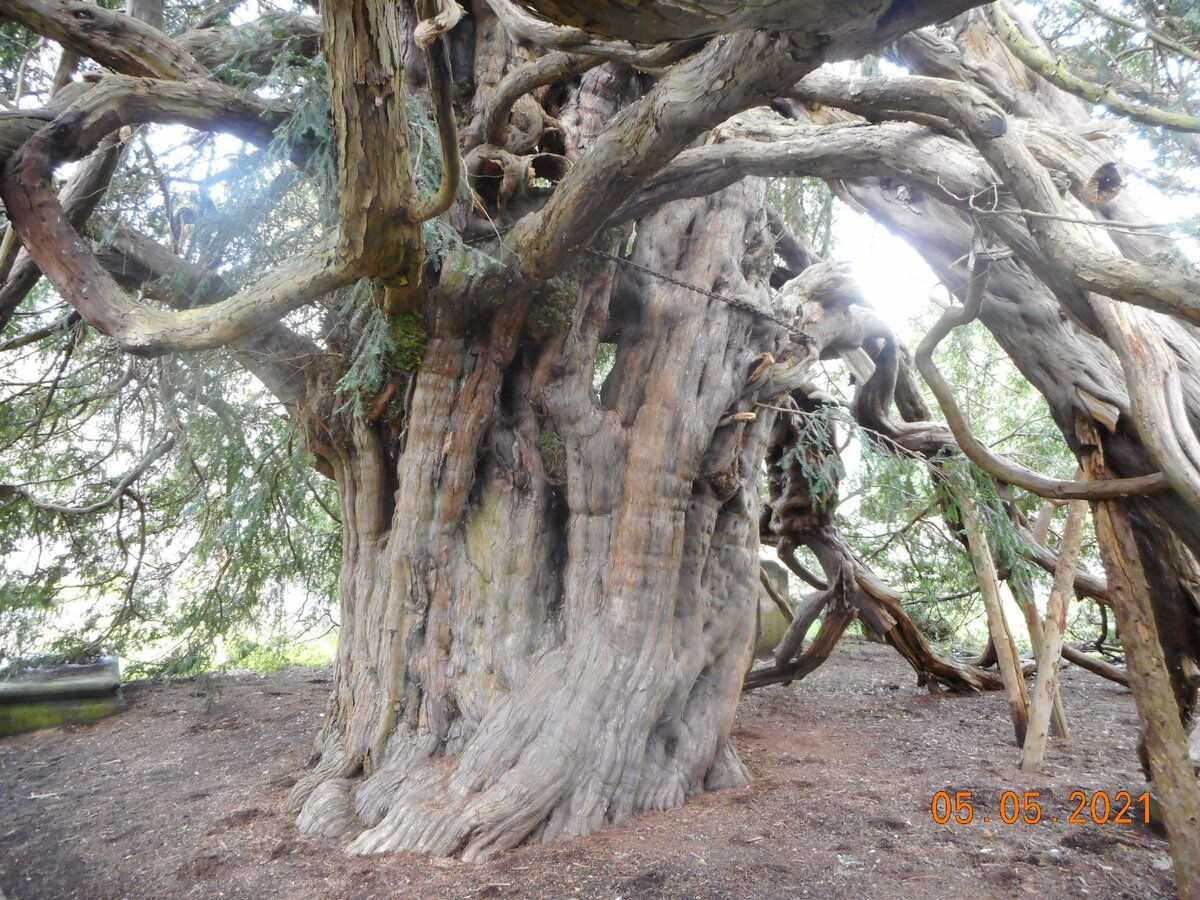 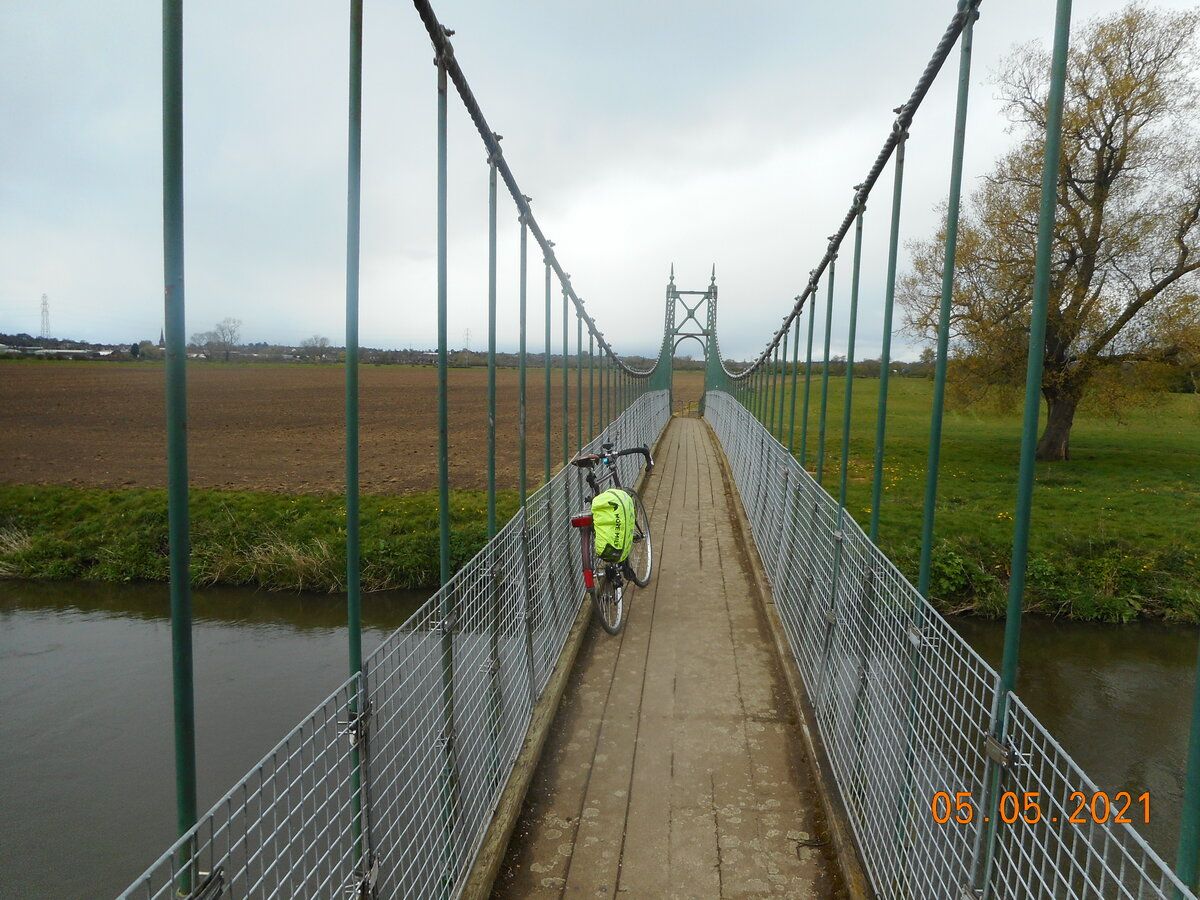 From here I crossed the fields to Uttoxeter via the footpath .
Through Uttoxeter and onto Loxley Green ,Kingstone and over the Blythe . A short section of the A518 and a fine view of the remains of Chartley Castle . 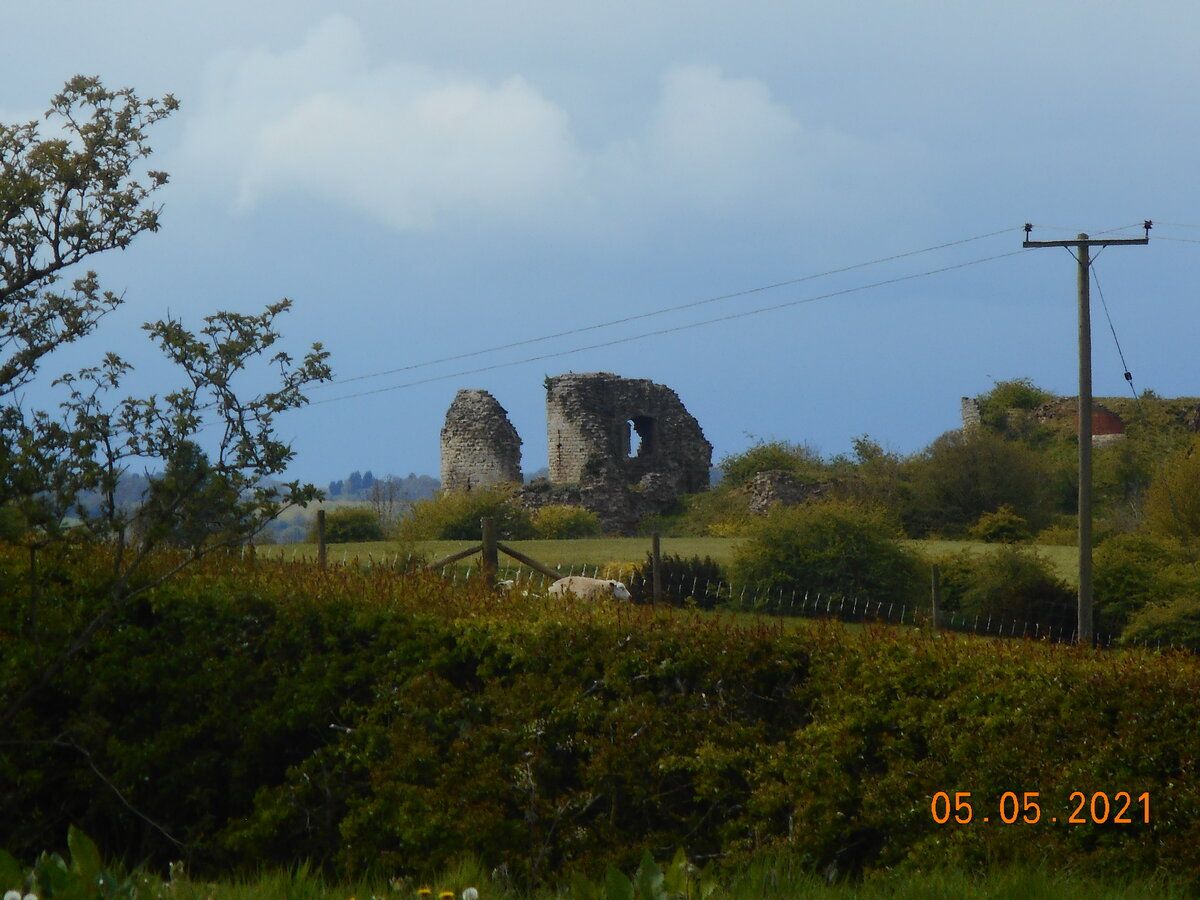 Into Stowe by Chartley ,wandering through the lanes to Dapple Heath and Abbots Bromley . Refueling with a sandwich from the village store .
The rain caught me here and stayed for the next 1/2 hour .
The final part of the ride took me through Hanbury and Tutbury returning home from here in bright sunshine .
Last edited: 5 May 2021

Today's ride started in pleasant bright sunshine, however 3 hours into the ride and a black foreboding sky appeared on the horizon, shortly followed by thunder claps, forks of lightning and piles of hailstones pouring from the sky. I took cover under an obliging big tree and waited for the near maelstrom to pass, within 15min it stopped and then bright sunshine appeared again, so I got back on my bike, riding away as if nothing had occurred.

On the way back from work. 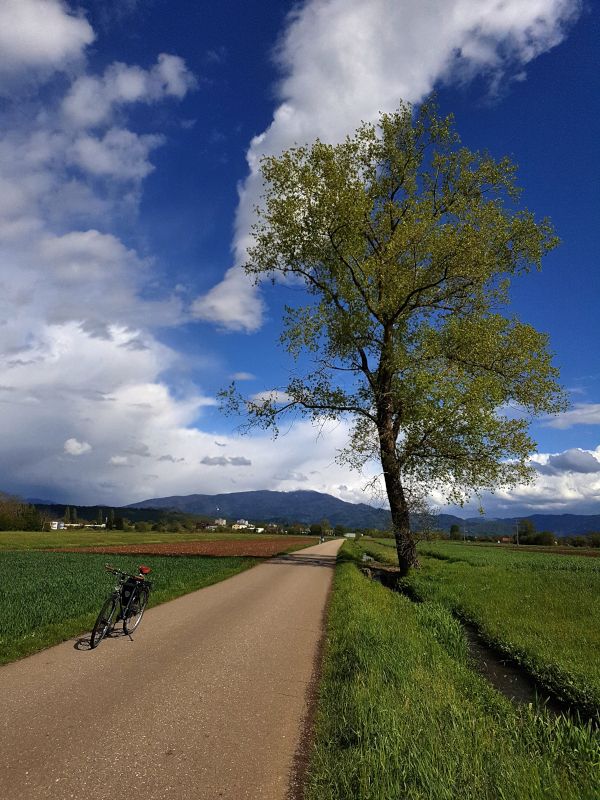 No pictures on the way in as it was absolutely pishing it down...

Club mid week tempo ride today with 4 of us taking turns in the wind
just a quick spin around the block for about 25 miles at evens pace , total for me 37 miles at just under 19 avg Daughter 2 had karate in Hanley Castle, so took the bike in the car and went for a spin round Hanley Swan, Welland an Upton while she learned how to beat people up.

Caught the tail end of a hail shower for the last couple of miles, it was funny hearing my bell ding as the hail stones hit it.

Just under 11 miles in just over 40 minutes. Great fun.

A day off work today but woke with zero motivation for a ride .A couple of days of dealing with doctors and social services about my mum's failing health has left me drained . I had promised to take my Auntie (mum's twin) to vote so picked her up did are democratic deed and went for an alfresco coffee at the local cafe . Had a really nice chat which lifted my mood and was told to for a ride so on arriving home donned the lycra and out the door at 12.00 . Headed out to Odestone on what was a regular route but hadn't done for over a year . Plenty of climbing up to Markfield then up and down all the way to Odestone ,had already worked out the old route wouldn't give me 50km probably why I not riden it recently . Back to Market Bosworth via Barton in the Beans and Carlton . At Bosworth instead of turning for home I headed out to Shenton and back to Bosworth took the normal route home including @pawl "Death Hill" I did nearly die at the top as the kick up at the end always catchs you out but the cemetery is handly placed to your left if you don't make it . Home via Ratby and Groby . 35.4 miles with 1650ft of upness at 16 mph so glad I got out my mood definitely lifted as I smashed it up some hills

This morning was a bit gloomy when I stopped at the photo tree on the way into work... 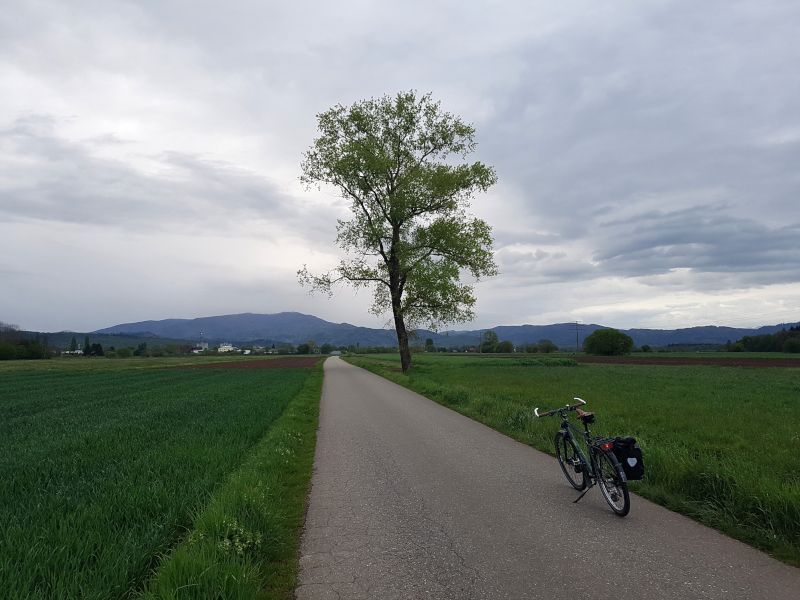 Then it got worse for the journey back... 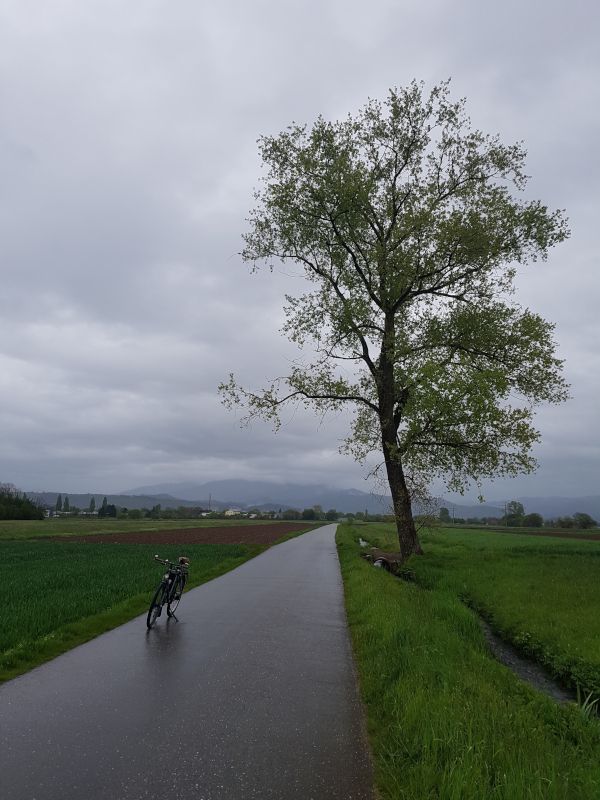 This is actually an improvement: it absolutely pished it down all day and only laid off a bit an hour before I left work...

I was playing taxi driver for daughter 2 again. Today it was athletics, so bike in the back of the car and a spin round Sneachill, Broughton Hackett and Crowle while she was throwing the shot put about.

A shade over 12 miles in a bit under 50 minutes. No hail to ring the bell today, but the wind was a pita in places.

What a ride! I was invited to a family, some of it anyway, meal at York Marina. Which is nearer to Naburn than York but on the same river. Anyway, the restaurant there is pretty good, so it seemed a fair idea to ride along there.

Until you look for a route. There are a couple of closed roads out that way, east of Leeds. OK, detours are possible but almost inevitably longer, and this is already a long ride for me. To start with what is becoming a favourite way out of Leeds, ride the Jacko down river (yes, there is a towpath) to Woodlesford. Quiet on a weekday morning. Around the southern side of Garforth, up the cliff, and stay on the A63 till the junction with the B1222. And that is the navigating done.

Yup, there is a list of places to ride through. Sherburn in Elmet is the first of any size, though there is Newthorpe before that. I wonder if the New Inn was originally the Newthorpe Inn? Cawood, with it’s impressive swing bridge, well I think it is impressive, although it is a long time since I have seen it swung, so to speak.


Stillingfleet next, this place has the closest thing to a hill for a few miles. And an advert for tearooms that are open seven days a week. But I had this appointment to keep. Though Naburn is not very far away, and I was early, searching for tearooms just is not high on my list. Any list. On to the marina entrance, which I reached a surprising number of minutes early. So I rode past, to Fulford, and back again, being overtaken by my sister on the way. She was in her car.

A relaxed and freezing cold refuelling stop and then I can warm up, the quicker I pedal, the sooner I am warm. The cloudscape in front was not the best looking I have seen, and on my return journey it leaked every now and then. And a headwind was expected too, but only rarely happened. Usually on the uphill bits of course. Altogether, the weather decided me to take much the same route back as out. The views were different of course, looking the other way.

Back to the place I started from, many reasons for the smile, sixty four miles of riding is many, and for all it is flat country out that way 2159 feet of up is good enough to smile wider. The legs, well, they lasted fine. Happy cyclist, and as I said at the beginning, ‘What a ride!’ 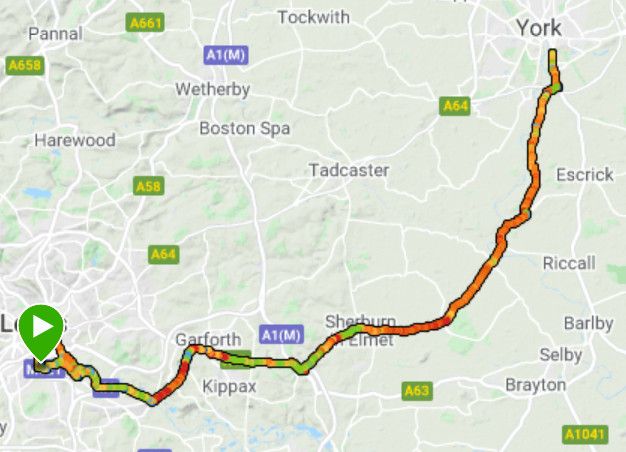