What am I doing to cause my rear gears to slip?

I have had my new bike for about a month now and I have taken it back to the shop a couple of times as I am having a recurring issue of the chain slipping at the back when I use easier gears. It is a big problem in 1-3 and 1-2 (if I am using the right numbering 1 at the front) and I am going up hill. All other gears seem fine.

The first time was after my first ride and the guy said I must have peddled too hard when changing gear and it stretched the cable, the second time he said my rear cartridge was also loose. I try my hardest not to increase the speed I am peddling when changing and some times I slow it down.

It is a real pain as these are the times I a struggling most but I must be doing something wrong to cause this. The bike has only done 50 miles so far so I wouldn't expect too many issues yet.

I don't I might be able to fix it with the barrel adjuster but I am not sure what I am doing there. I have booked onto a beginners maintenance and bike care course as a cycling centre near by.

Never really heard of stretching cable by pedalling too hard.
Have a look at how the derailleur jockey wheels line up with the cogs of the cassette. If they are not inline that will cause gears to slip. Something your bike shop could easily have sorted for you.

What bike is it and what gears have you got?

Try this video it might help you index your gears.

Bike radar is another site worth a visit.
https://www.bikeradar.com/gear/article/10-reasons-why-your-shifting-sucks-45119/
Try this.

Keep taking it back until he sorts it properly & stops fobbing you off, or consider making a complaint to the manufacturer but any mechanic worth his salt will sort it.
M

Check that the chain lines up with a cog and adjust the tension if required.
Change to easier gears in advance of needing to and ease the pressure on the pedals slightly when you shift, you don't need to slow down.

Yes, its up to the shop to sort it, end of. Your contract is legally with them and you should assert your right to a correctly functioning machine. You could demand a refund
Leave it with them and say they should only contact you after it is fully sorted.

Sounds like somthing is not set up right am no expert being new to this too. I can’t see what you can be doing to make it happen. GCN is a good place to start also park tools have same good YouTube stuff. Bikeradar also have a maintenance app too. Do a bit of checking up and then go armed with a bit of knowlage before you take it back. Also get clued up on consumer law in case you need it.
OP

Thanks all, I will check those videos out. On the way home 1-3 was pretty much un-usable on hills and 1-2 wasn't great, the hills were fun. I'll also go back in to the shop on Saturday.


MichaelW2 said:
Change to easier gears in advance of needing to and ease the pressure on the pedals slightly when you shift, you don't need to slow down.
Click to expand...

That is what I generally do.

It is a Cannondale Quick CX4, according to the specs here it has:

I was just wondering! It isn't the freewheel mechanism slipping is it? This can produce odd slipping and intermittent problems and may only show up under load.

It really doesn't matter what the cause is, the OP should be taking it back to the LBS who he bought to from & either getting them to fix or refund, it's not his place to be fixing it & risk invalidating his warranty.

I've never removed a cassette but have taken quite a few freewheels off over the years. With a freewheel all the mechanism is in the block which screws onto the hub. With a cassette, the freewheel is part of the wheel hub called a freehub. If there is any slippage of the cogs it may mean the pawls in the freehub are slipping as the cogs slide on splines of the freehub. 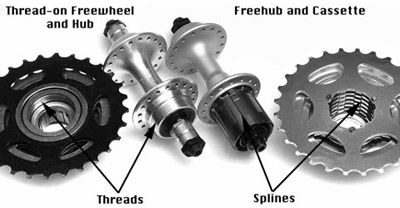 LBS need to sort this as this is usually a problem with old bikes not one as new as yours.
If it is the freehub slipping it could need a new wheel as that would be cheaper than rebuilding with new hub.

In my limited experience, gears slipping at the top end of the cassette (bigger sprockets) are either linked to the gear cable being incorrectly tensioned - generally too tight, but could be the other way. GCN's video showing how to adjust the rear derailliur / barrel adjuster on youtube explains it pretty well - or the rear wheel being slightly out of alignment.
Lesson learned on point 2 due to swapping wheels a lot for the turbo trainer and faffing around with shifting endlessly thereafter. I've hardly touched the indexing at all for months since following GCN's advice on reseating the wheel correctly; put your weight on the saddle to force the wheel into the dropouts before tightening the skewer. This also cured occasional rubbing of the front mech at either end of the cassette range when not on dead straight.

It may be a fault that only the owner can replicate ,so the bike shop are unaware of what is happening. A usual no fault found, intermittent fault which is hard to pin down unless it happens when they are trying it out.
It sounds more likely that it is the freewheel slipping as I don't see how the chain would slip under normal conditions.
Perhaps the owner could ask the shop to check that it isn't the freewheel which is faulty. A simple solution would be to swap the wheel for another and see if it happens again.
You must log in or register to reply here.
Similar threads