Andy in Germany said:
@Pat "5mph" I'm glad you like it. It's a screenshot of a map made in BikeMap (https://www.bikemap.net) with extra comments added using the gimp (https://www.gimp.org/) an open source version of Photoshop. I use(d) it for lots of stuff at work, including power point slides, and just made my latest CV with it.
Click to expand...

Cheers @Andy in Germany!
On the by, I am using the new forum feature "bookmark" to save this info, for when I have time to go look at the programs you linked too

A short hilly 14 mile ride in windy conditions. Lots of cows about today . 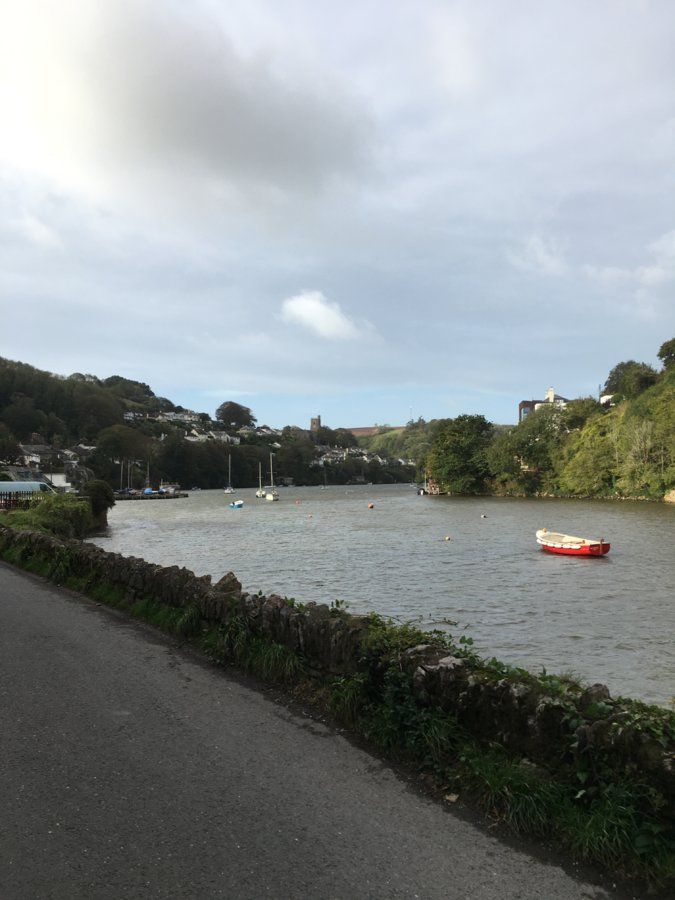 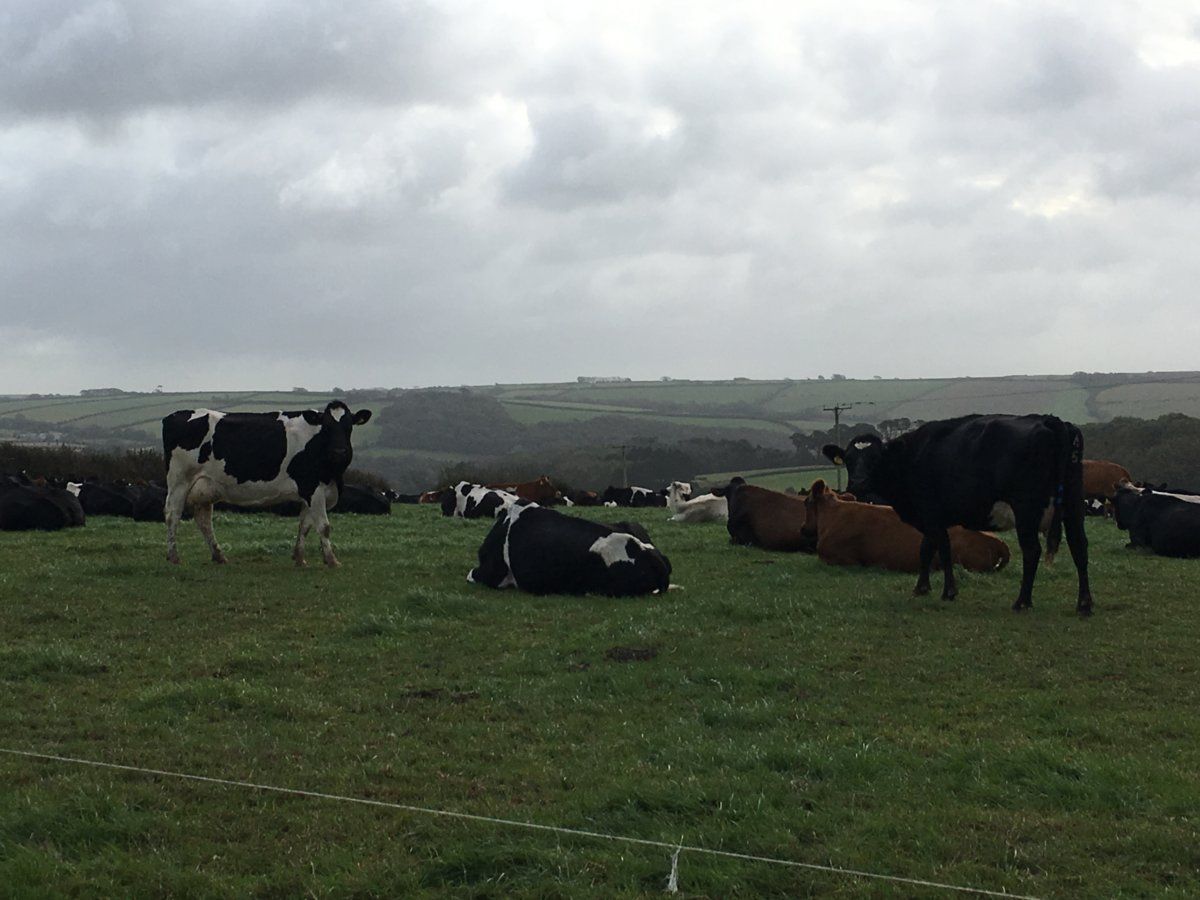 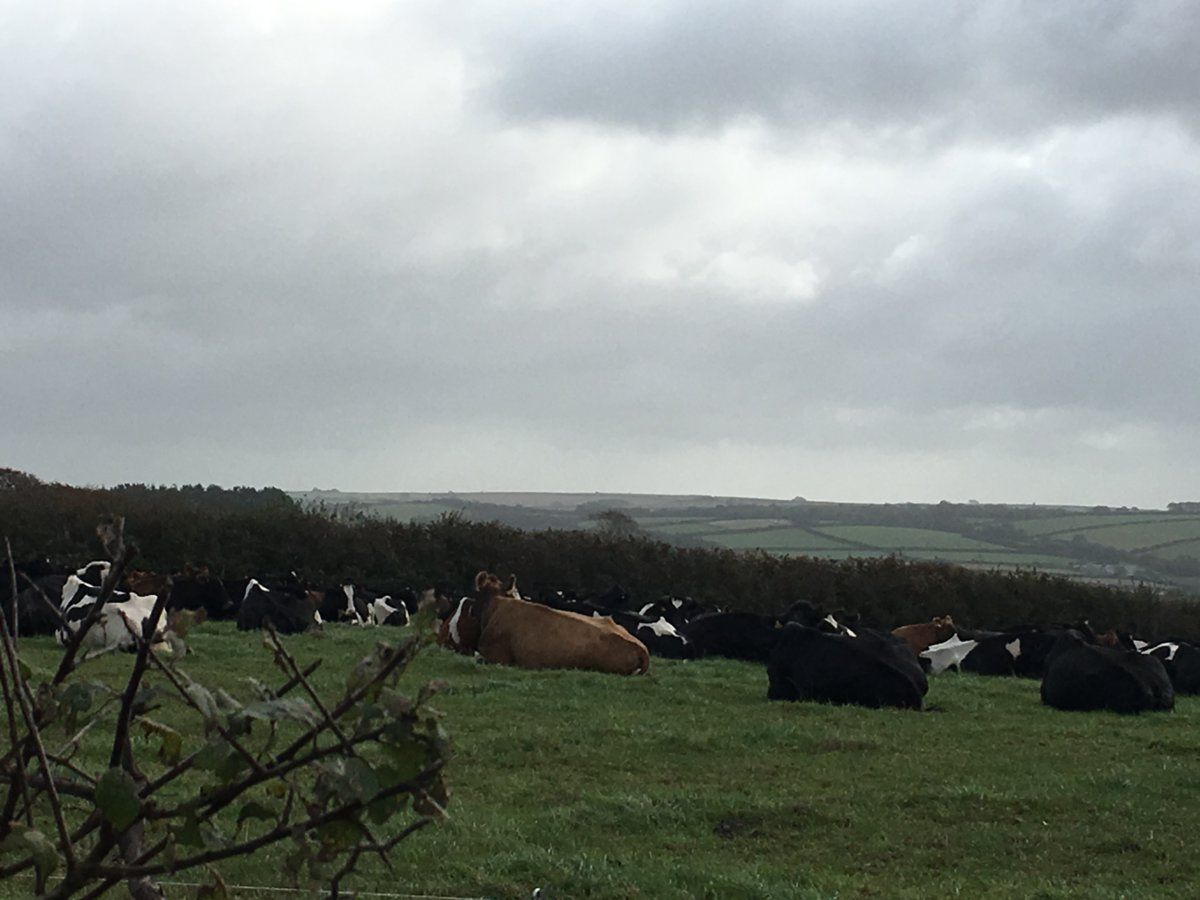 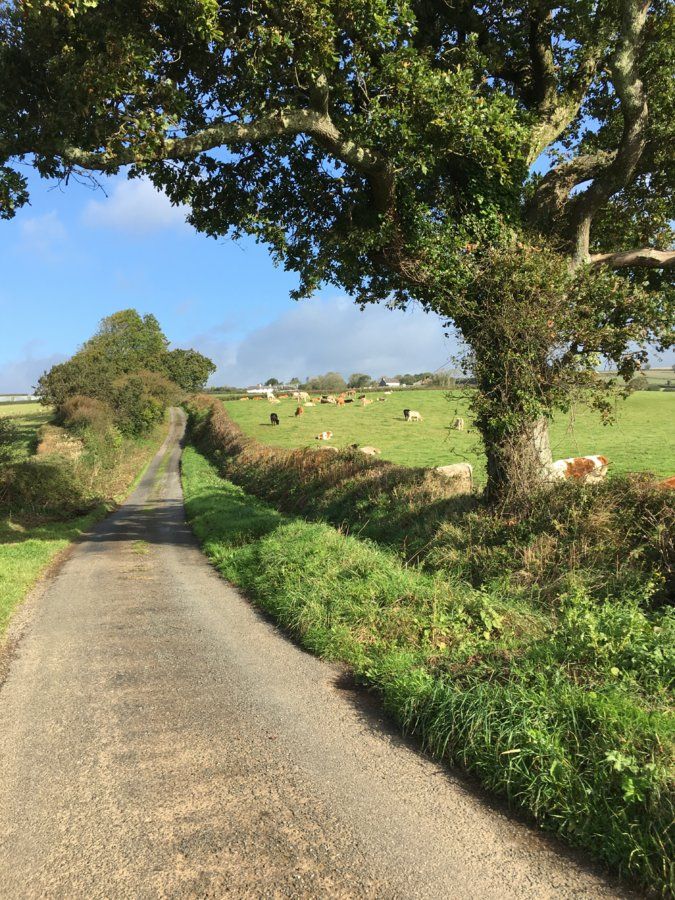 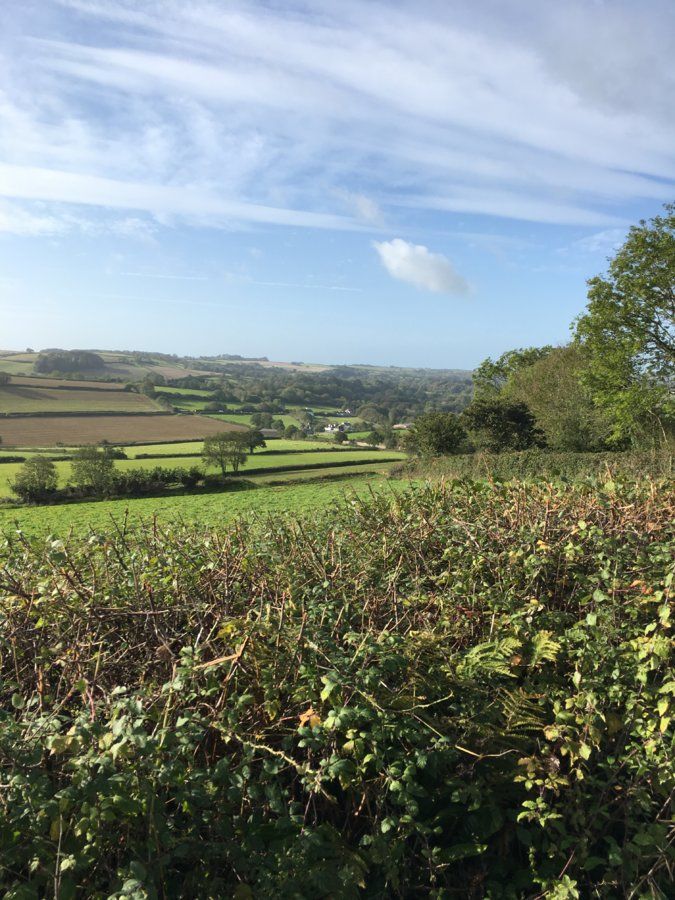 A short (15.3 mile) ride in the rain today. My old friend and former work colleague Simon got the short straw when it came to allocation of days off work, so I agreed to go for a ride with him despite the weather. As usual, within a mile or so of starting out, the rain somehow didn't matter at all, and we had a good chat while ambling along through the Cotswolds near Minchinhampton, Gatcombe Park, Cherington and the outskirts of Tetbury. Nice to see that Simon is taking good care of my old No.3 bike that I gave him last year. 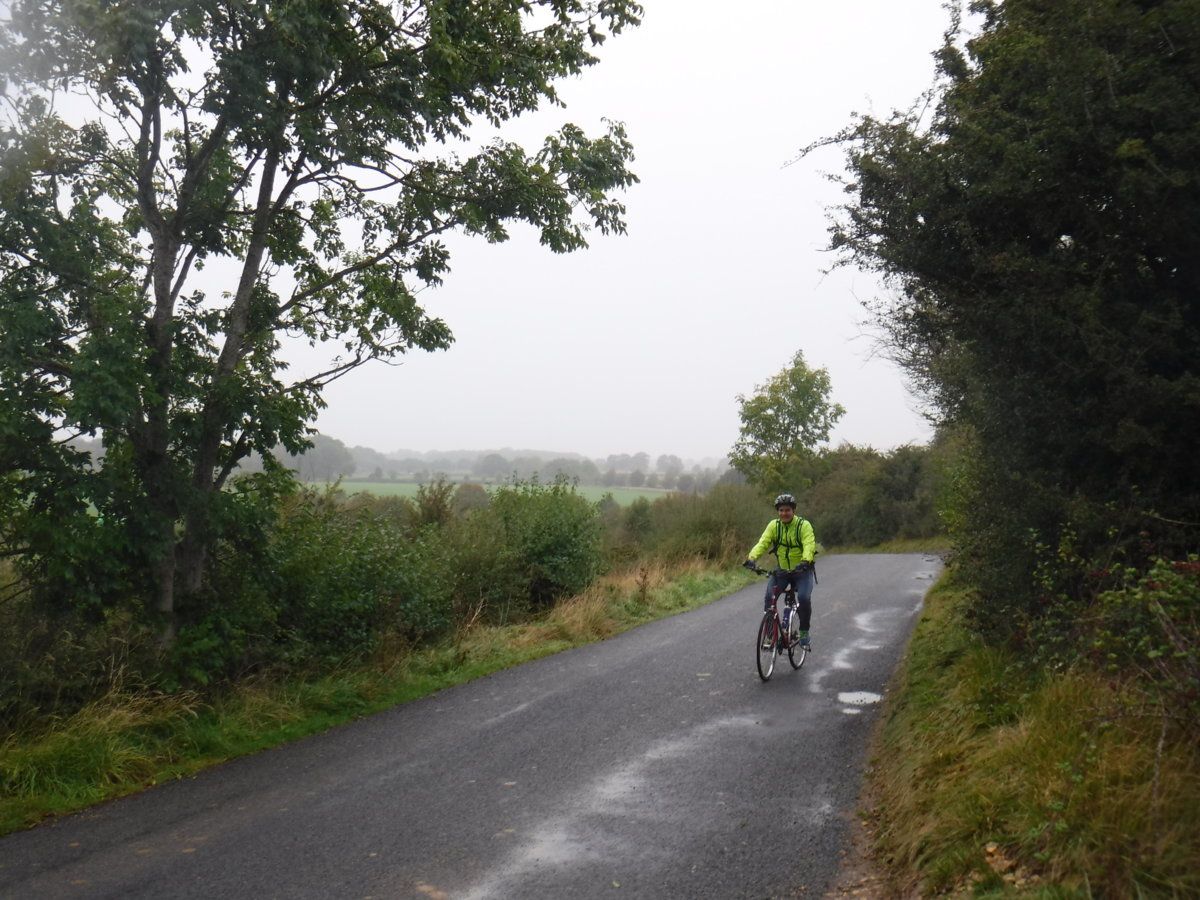 Ended up really enjoying the ride and a pub stop on the way home. Sometimes it is nice just to stick the bikes on the car and head off somewhere different for a change of scenery and a slow pootle.
Cheers, Donger.

One interesting fact about today's ride is that puts me over 13.000 km for the year! 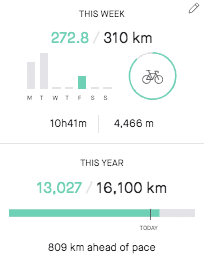 The ride? Nothing special to show other then my riding buddies H U G E bread with pork and some spread! 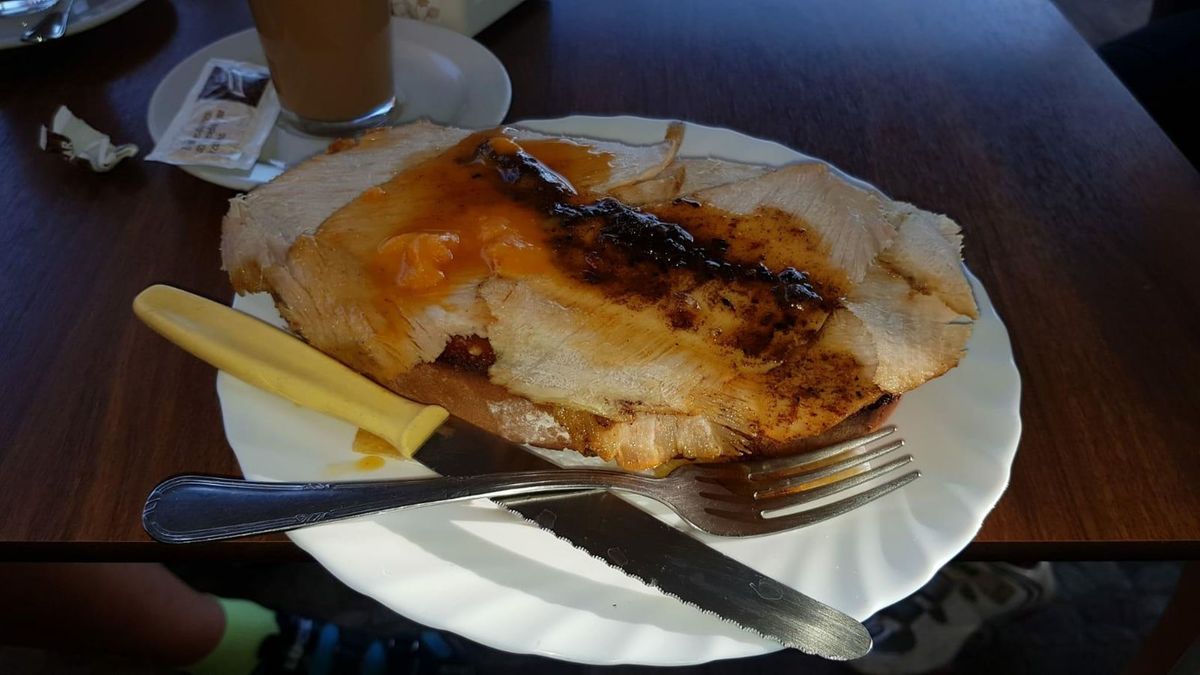 My buddies for today? Some local folks that had a day off. Coffee time! 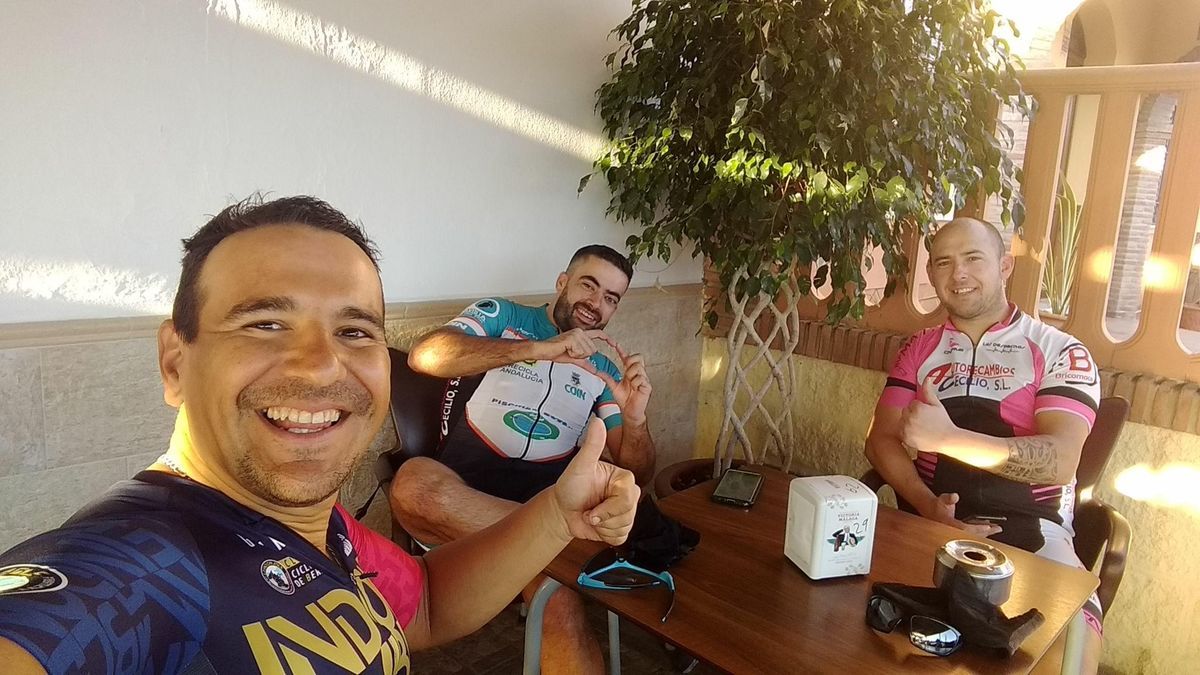 Give you a heads up for tomorrow?? I have a Gran Fondo event to do....

Shambling ruin of a man

Went out yesterday to test a few niggling pains, almost immediately regretted wearing shorts due to the cold in the air but by the time I'd climbed through the Dams park I was plenty warmed up. This time I turned right and went down Aurs Road to Barrhead, and was tailed by a guy who really wanted to get past me despite the blind corners (you'd think having his first attempt thwarted by a car coming the other way would have made him wiser, but no)

Being tailed thusly made me ride rather faster than I'd like, and as a result I nearly came unstuck when someone pulled out of a side road on me without looking. "Oh no, not again" I thought, but she slammed on the brakes just in time and I swerved past the front of her bonnet with centimetres to spare.

Death defied, I continued through Barrhead and up the Gateside/Fereneze road that climbs the valley wall opposite Neilston, with its 12% ramp I was a sorry state by the top, just in time for a headwind and the rain to start, though it soon stopped again. My Garmin says that it was 2°C up there (I believe it) but I got down without incident and ended up in Kilbirnie. With only 2 and a bit hours of daylight left I weighed my options, before deciding to stick to the familiar track of NCN7 and head back home with a brief stop at Castle Semple Loch.

Niggling pains were in full voice by the time I got back, just shy of 42 miles with 1900 feet of climbing and a 12.4mph moving average. I AM SO UNFIT

Friday. Wet. Windy. Did it put me off? Nah !
So it was out around 10.45am about 90 mins later than planned but it really didn't matter. East for me and I had on a jacket and longs. As soon as I got out the door the rain stopped and the sun beat down. After 10 miles I was sweating like a Chihuahua on the sea front.
Out via Thorner, Bramham, Tadcaster, and some very quiet lanes to Bolton Percy, Acaster Malbis , Copmanthorpe. This was almost into York so I turned west and after a few stops and starts to consult the map through Askam Richard, Helaugh, Wighill and into Boston Spa where I was out of energy and stopped to grab a tea and a bun. Then home. No dramas. Which is always good.

colly said:
Friday. Wet. Windy. Did it put me off? Nah !
So it was out around 10.45am about 90 mins later than planned but it really didn't matter. East for me and I had on a jacket and longs. As soon as I got out the door the rain stopped and the sun beat down. After 10 miles I was sweating like a Chihuahua on the sea front.
Out via Thorner, Bramham, Tadcaster, and some very quiet lanes to Bolton Percy, Acaster Malbis , Copmanthorpe. This was almost into York so I turned west and after a few stops and starts to consult the map through Askam Richard, Helaugh, Wighill and into Boston Spa where I was out of energy and stopped to grab a tea and a bun. Then home. No dramas. Which is always good.

We stayed in some cottages in Acaster Malbis last week when we went to watch the world championships. Stunning little place.

Quick pre-rugby 10 miles round the lanes this morning. My neighbour was just doing the same so turned into a lovely social ride. Was on the Tricross for the first time in an age, too. It feels so light compared to the Toughroad, and yet I know the Tricross is a heavy bike! Now got a coffee and the TV on. C'mon England!

A short one this morning while time allows.
I came home via Puslinch Hill... always fun! 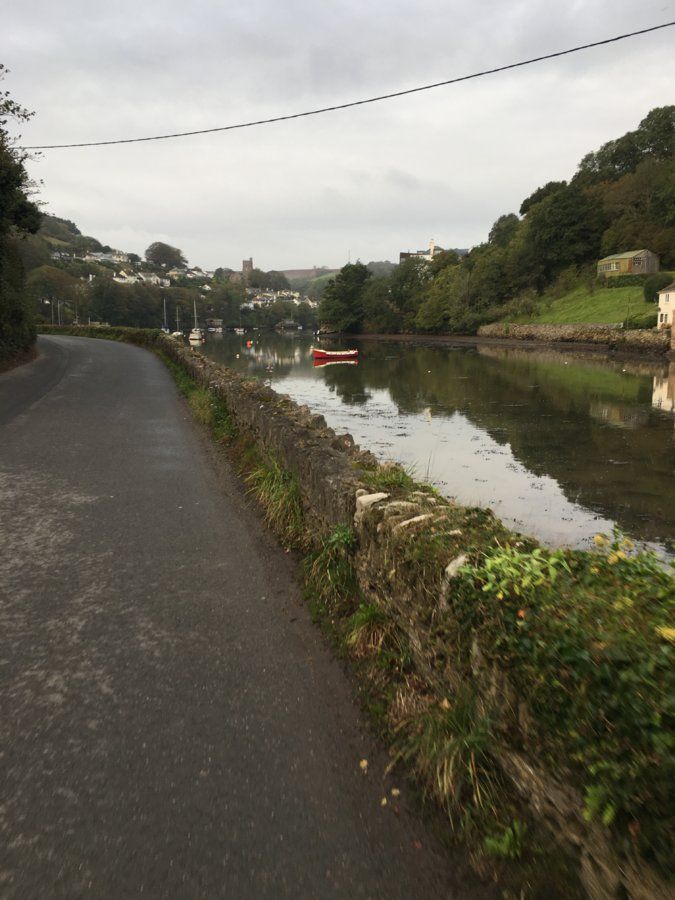 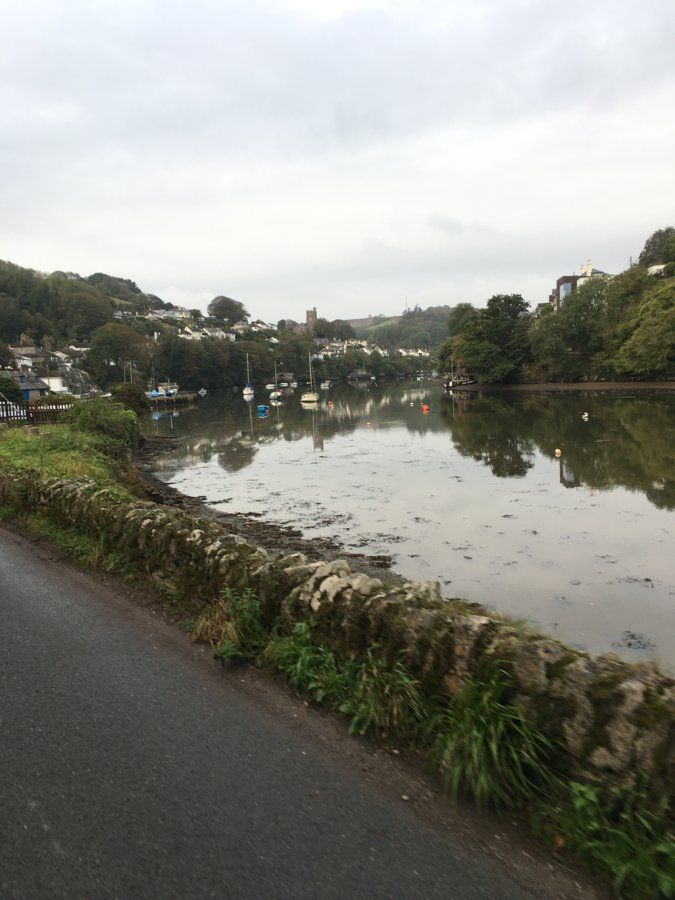 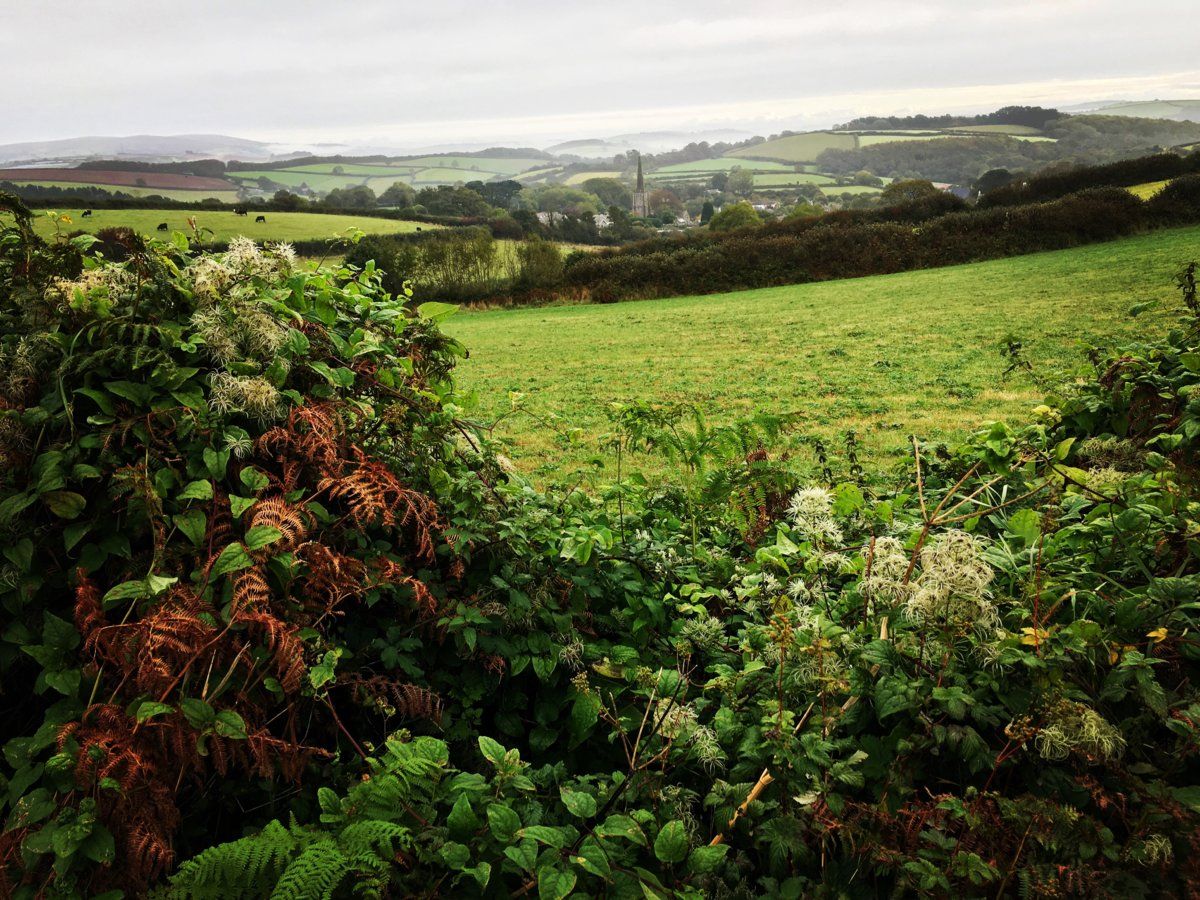 Late morning and it was still less than mild, dull and damp feeling from the remnants of the misty earlier morning so out on the ebike and even with lots of normal clothing on (t shirt, sweatshirt , lined parker and jeans) going downhill in particular was

. Destination initially was the shop at the showground for a gluten free sticky toffee pudding, being a confirmed ceoliac it's a case if using lots of shops for a bit from each. As usual there was some event on at the showground and the steep hill on NCN67 was busy with vehicular traffic. Then across to a M&S Simply Food for the last Cumberland Pie on the shelf (GF despite not being labelled as such) and two GF Pains Aux Raisins. Back home in part using the UCI circuit in reverse with stacks of chalk markings still evident but it seemed so quite compared to the buzz of last weekend. 10.5 miles with 765ft of the battery being run down that bit quicker. 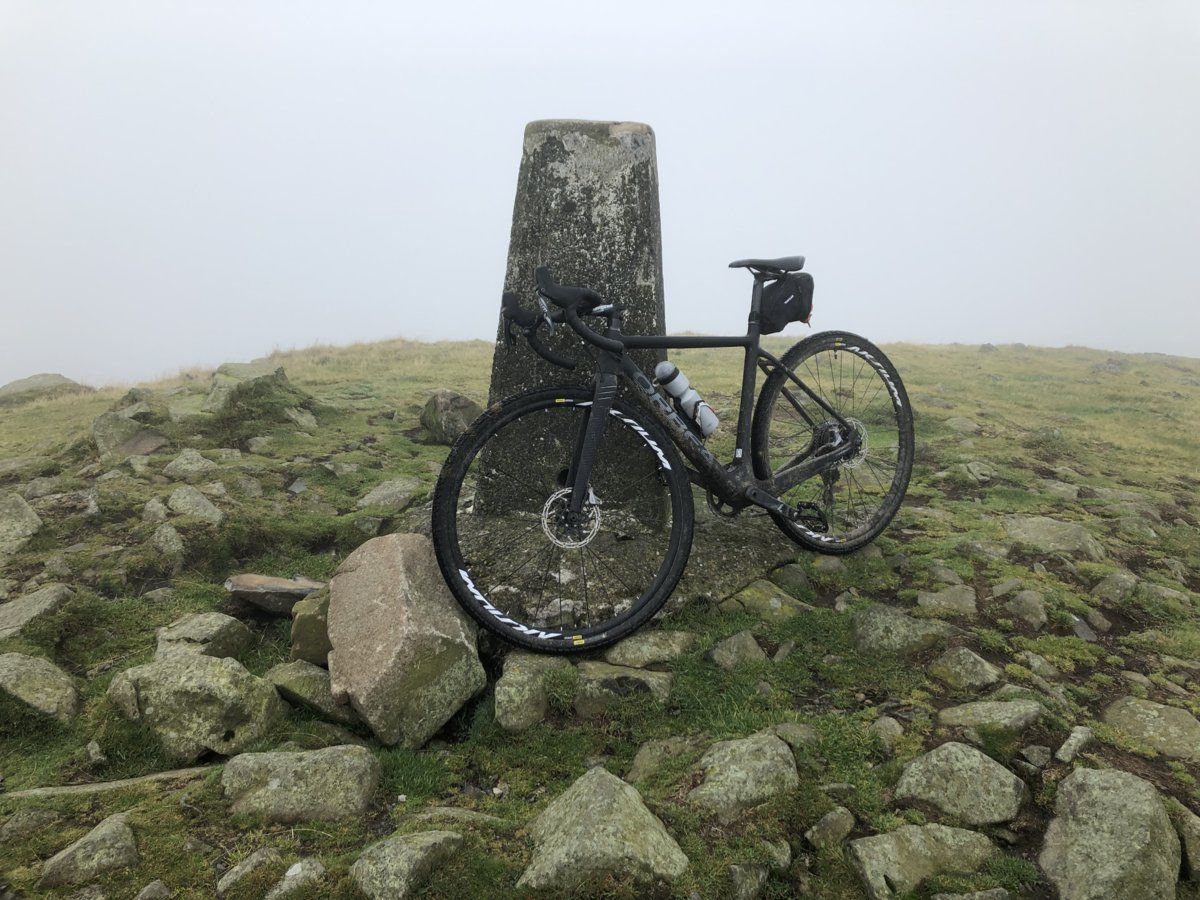 Thought I'd pop out for a quick mile to test my new groupset..
2hrs later and 20 miles, well happy, gorgeous day.

Dreadful weather for tomorrow so glad i made the effort.

Forgot to switch on phone too.. The wife bless her thought I'd had a mishap

Another utility ride to the supermarket, 6.13 miles. Stopped at the mini Tesco on the way back ‘cos I forgot the peanut butter. 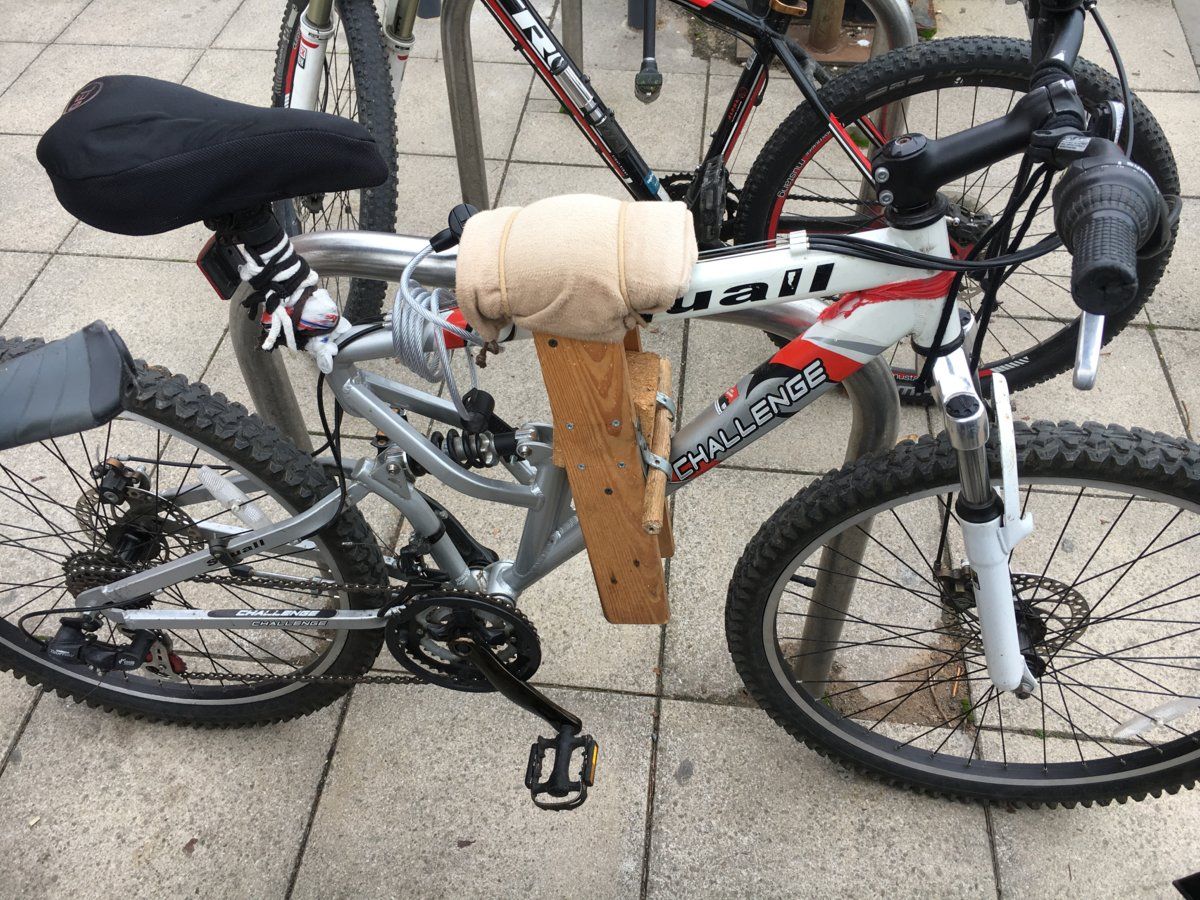 Saw this bike with a bodge job kids saddle on it. Interesting. 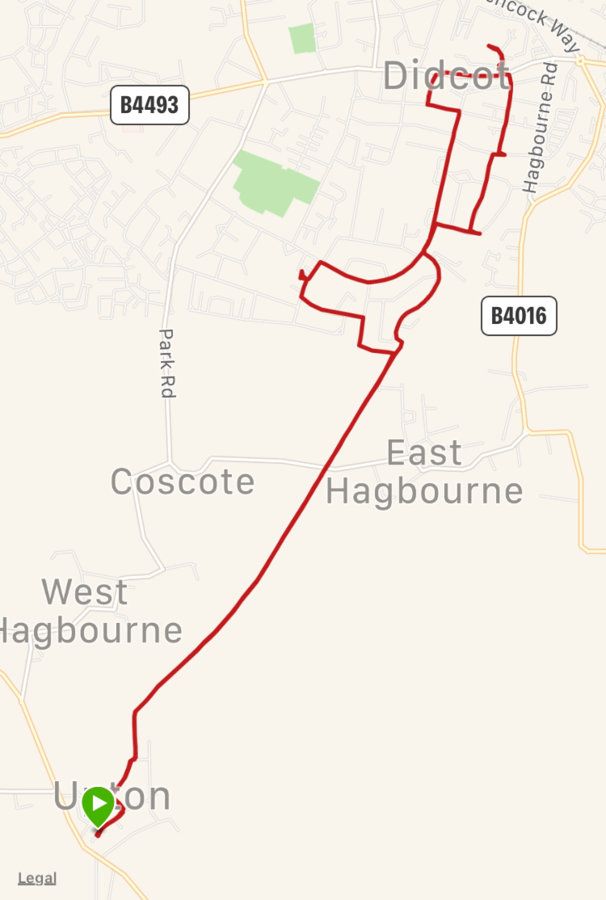 Another morning that tempted me into riding the bike. This is not difficult, if the sky ain’t leaking and there is only a breeze I am persuaded. Off I pedalled.
By the time I reached Water Lane I had changed my mind. Not about riding, just where I was going to commit this. I was not riding up to the clock at Oakwood this morning. Instead find the towpath at Office Lock and ride along that to Viaduct Road. Cross the Aire and ride to Headingley, sorting out a route as I rode. Still have to ride up to Lawnswood and the traffic lights beyond. Turn right, onto Church Lane and approach Five Lane Ends from a different direction to last time. A group of cyclists there, waiting for the remainder to catch up. ‘Good morning’ all around, they went one way, I followed Eccup Lane past the north end of the village and then the New Inn on my way to Weardley.
It is a nice drop to the village, would be nicer with a better surface. The old friend, the A659 is next and not for the last time today. Turn right and ride along to the bottom of Harewood Bank and turn left. Cross the Wharfe at Harewood Bridge, a mile or so further is the right turn for Kirkby Overblow. There are a couple of deceptive climbs on the way there, in plain English they felt steep, then the road to Kearby with Netherby is errr, rolling. Another rise in the road, after a left hand bend I always wish I had ridden faster, leads to the flat stretch of tarmac towards Sicklinghall.


A good road, and after Skerry Grange, up and down and fun to ride. So much so that I missed the right turn I intended to take, which leads to Linton. There is another a bit further on, that is the way to go, through the village and back across the Wharfe on the way to Collingham and the A659 again. Only as far as the Wetherby Road, A58, at the junction with this I was caught by a rider on a recumbent. This had at least three wheels and was very low indeed. I would need a bravery transplant to ride it. Bardsey next, and a left turn at the lights to gasp and pant up Rigton Bank. Through there ( East Rigton ) and take the road out to Thorner, once past the woods this road feels like its on top of the world. Or this rider does, anyway. Turn left down Milner Lane and into and shortly out of Thorner. Sandhills again, the last bit of climbing for the morning. The River Aire has to be crossed again, and it is downhill most of the way to Crown Point Bridge. I grumble about having to climb out of Leeds, never thank geography for the return though. Still, thirty five miles and a fair bit of up combined to put a grin on my face as I stopped outside home, somewhat weary. 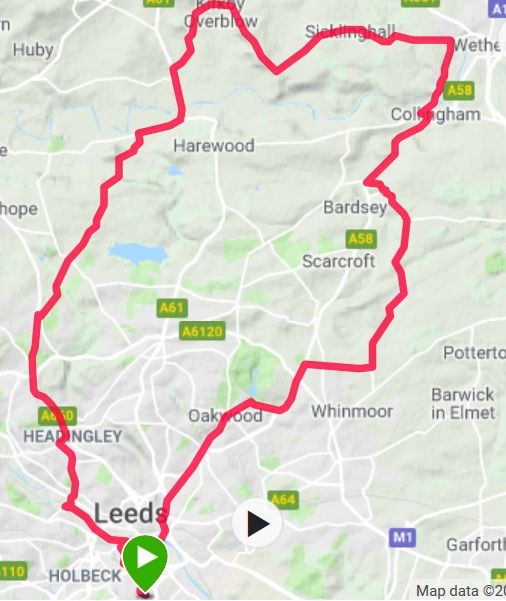